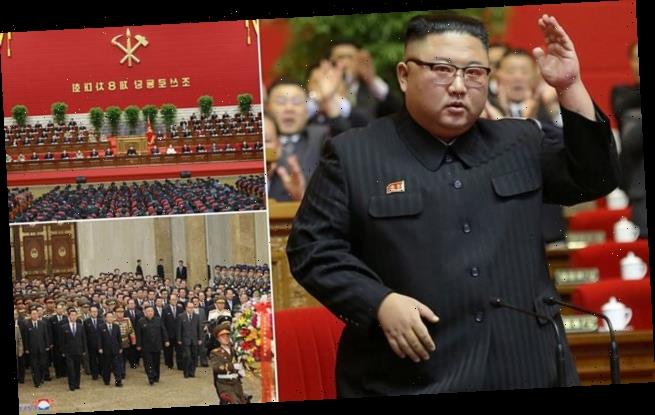 Kim is looking to grab the attention of the incoming Biden administration, with his country more isolated than ever after closing its borders to protect itself against the coronavirus pandemic.

A nuclear summit between Kim and outgoing US President Donald Trump in Hanoi in February 2019 broke down over sanctions relief and what Pyongyang would be willing to give up in return.

‘While strengthening our nuclear war deterrent, we need to do everything in order to build the most powerful military,’ KCNA cited him as telling the Workers’ Party congress.

The meeting came amid a prolonged gridlock in talks aimed at ending the North’s nuclear and missile programmes in return for US sanction relief.

Earlier in the eight-day congress – twice as long as the previous meeting in 2016 – Kim called the US ‘the fundamental obstacle to the development of our revolution and our foremost principal enemy’. 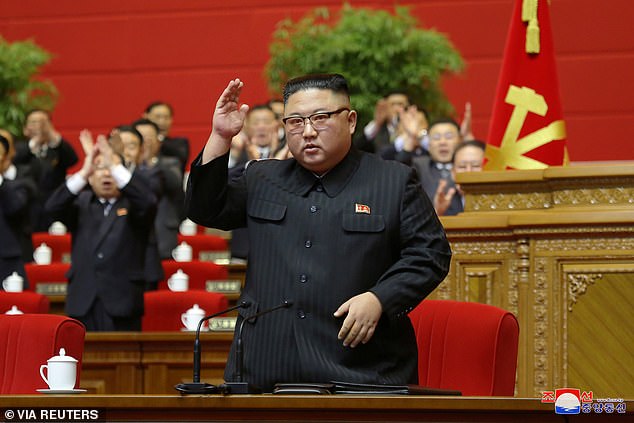 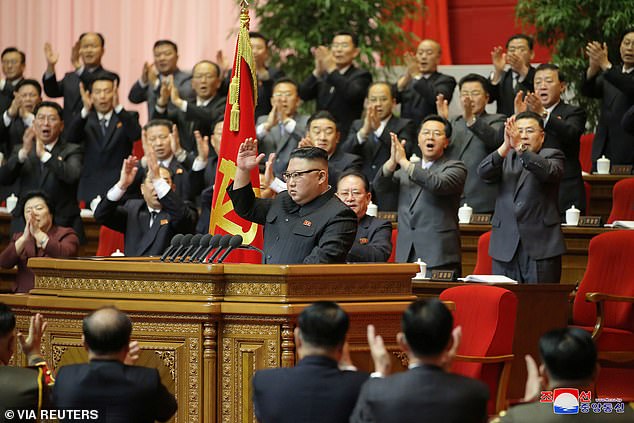 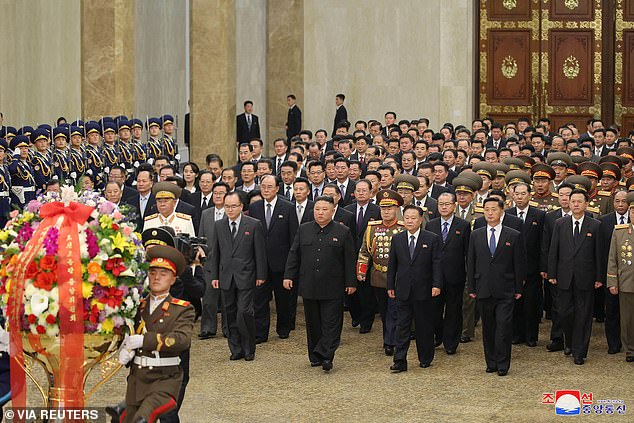 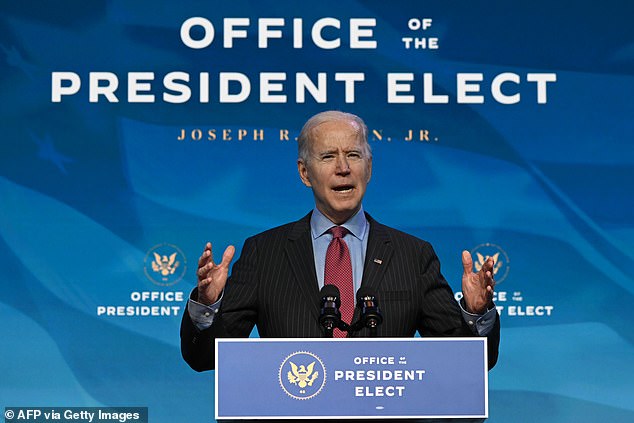 US President-elect Joe Biden speaks at The Queen theater in Wilmington, Delaware

‘The real intention of its policy toward the DPRK will never change, whoever comes into power,’ he added, without mentioning Biden by name.

Kim and Trump had a tumultuous relationship, first engaging in mutual insults and threats of war, before an extraordinary diplomatic bromance featuring headline-grabbing summits and declarations of love by the US president.

The change of leadership in Washington presents a challenge for Pyongyang, with Biden characterised Kim as a ‘thug’ during the presidential debates, while North Korea has previously called Biden a ‘rabid dog’ that ‘must be beaten to death with a stick’.

Kim said last week he would expand military capabilities to better defend the country and called for ‘placing state defence capabilities on a much higher level’.

The North had completed plans for a nuclear-powered submarine and offered a shopping list of weapons goals, including hypersonic gliding warheads, military reconnaissance satellites and solid-fuel intercontinental ballistic missiles, the leader said.

North Korea’s weapons programmes have made rapid progress under Kim, including by far its most powerful nuclear blast to date and missiles capable of reaching the entire continental United States, at a cost of increasingly stringent international sanctions.

At a military parade in October, it showed off a huge new intercontinental ballistic missile (ICBM) that analysts said was the largest road-mobile, liquid-fuelled missile in the world.

Kim told the party congress last week that his five-year economic plan had failed to meet its goals, blaming international sanctions as well as unanticipated crises including the coronavirus pandemic and natural disasters.

Separately, Kim Yo Jong, the leader’s sister and a member of the party Central Committee, criticised South Korea’s military for monitoring a parade in Pyongyang. 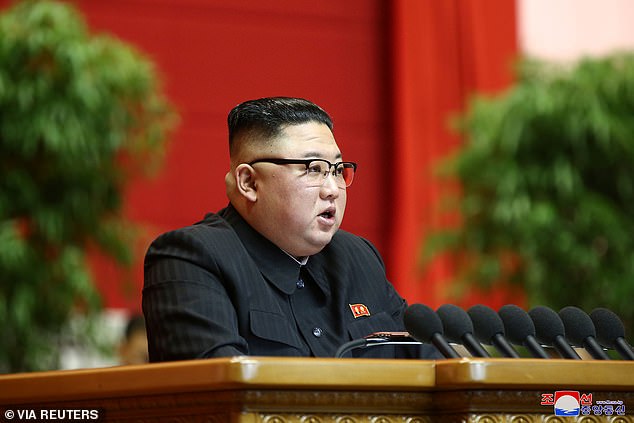 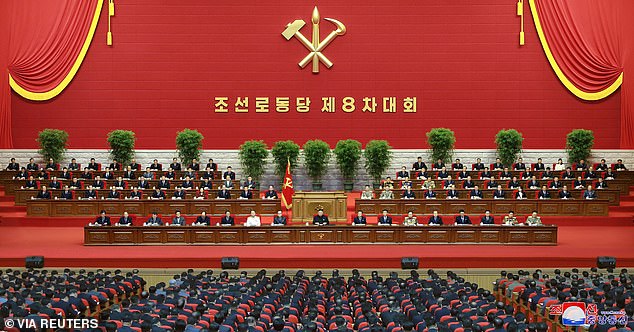 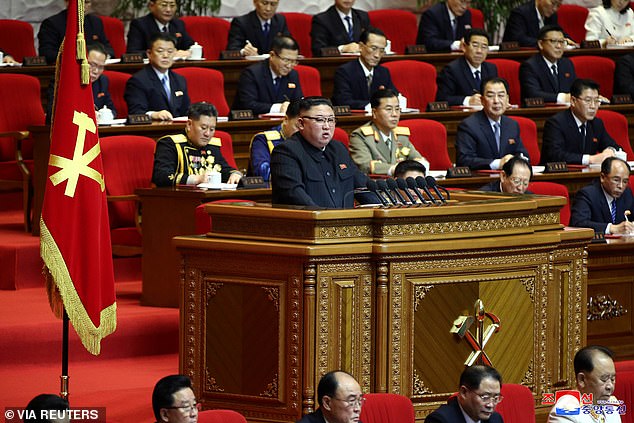 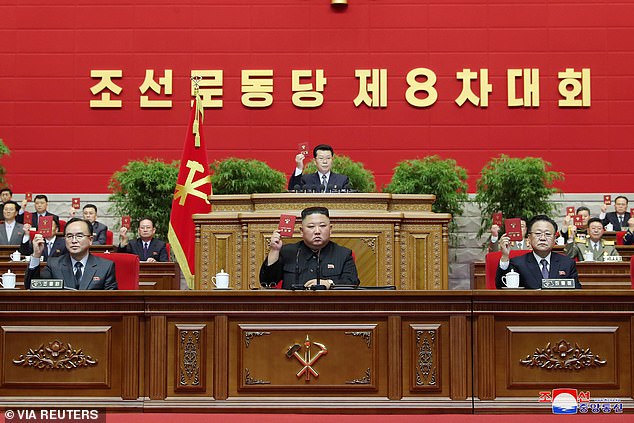 Kim told the party congress last week that his five-year economic plan had failed to meet its goals, blaming international sanctions as well as unanticipated crises including the coronavirus pandemic and natural disasters

The move was an expression of the South’s ‘hostile approach’ towards the North, she said in a separate statement carried by KCNA.

The congress is the top ruling party gathering, a grand political set-piece that reinforces the regime’s authority and can serve as a platform for announcements of policy shifts or elite personnel changes.

At the gathering, Kim was named the party General Secretary, a title previously reserved for his father and predecessor Kim Jong Il, in what analysts said was a move to reinforce his authority.

The North’s economy is struggling in the face of its self-imposed coronavirus blockade, mismanagement and sanctions, and Kim repeatedly admitted at the meeting that mistakes had been made.

‘Almost all sectors fell a long way short of the set objectives’ in the country’s previous economic plan, he said earlier.

KCNA reported that the congress will be followed on Sunday by a meeting of the Supreme People’s Assembly, the North’s rubber-stamp legislature.

And Kim’s influential sister Kim Yo Jong indicated that a military parade had been scheduled to accompany the congress.

In a statement carried by KCNA, she derided the ‘idiot’ authorities in Seoul after the South’s joint chiefs of staff said it had detected signs of a possible military parade in Pyongyang at the weekend.

The declaration was ‘senseless’ and a demonstration of a ‘hostile attitude’ by the South, she added.

‘We are only holding a military parade in the capital city, not military exercises targeting anybody nor launch of anything.’

Kim Yo Jong had appeared to suffer a demotion at the party congress, not appearing on the lists of those appointed to the party central committee, after previously being an alternate member.

But the issuing of a statement in her own name is an indication she remains a key player in the North’s diplomacy, having been behind its destruction of a liaison office on its side of the border last year.

The South’s President Moon Jae-in brokered the talks process between Kim and Trump, since that process became deadlocked, the North has repeatedly said it has no interest in talking to Seoul.

In his New Year address on Monday, Moon declared: ‘Our determination to meet at any time and any place and talk even in a contact-free manner remains unchanged.’