The fall of Lang Hancock’s business fortunes in his marriage to Rose Porteous is again a question before the Supreme Court of Western Australia as his grandchild Bianca Rinehart seeks to recover court evidence in her claim to his iron ore throne.

Ms Rinehart as trustee for the Hancock Family Memorial Foundation is seeking affidavits in a lawsuit the family trust — then headed by her mother Gina Rinehart — brought against Mr Hancock’s solicitor Carnegie Fieldhouse in 1995, after Lang’s death in ’92. 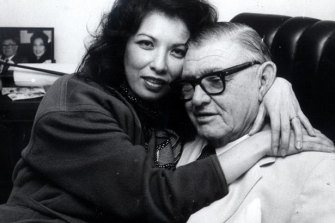 Rose Porteous, the third wife of mining magnate Lang Hancock, once argued his estate was not bankrupt.Credit:Archives

Mr Fieldhouse was accused of advising the Pilbara mining magnate to sell his controlling board share in Hancock Prospecting to the family foundation in 1991 for $20 million, which was “far in excess of its actual worth”, according to court documents.

It was argued that the share structure of the Hancock Group meant that his Life Governor’s Share lost its controlling value the moment it was sold to the foundation and at the time of the sale was worth “at the most, only $16,733.33”.

Mr Hancock had two years earlier sold his one-third shareholding in Hancock Prospecting to the foundation for $23.2 million.

It was alleged both sales to the Hancock family foundation were Mr Hancock’s tax-effective way of paying back huge personal loans, involving him and his third wife Rose treating Hancock Prospecting as a “family treasury”. But it was also argued that Mr Hancock acted fraudulently.

Those debt write-offs set off a chain of events that led to the foundation being declared bankrupt and entering into a debt reconstruction deal, which Bianca Rinehart’s legal counsel called “sinful” and fraudulent.

The lawsuit against Mr Fieldhouse —who died in 2007 — and later his insurers, was dismissed in 2016.

But who breached their fiduciary duties continues to be argued at court, 30 years after Lang’s death, with Ms Rinehart’s lawyer Adam Hochcroft arguing that the younger Rinehart as trustee was entitled to “investigate” her mother’s role in the matter.

Where Mr Hancock’s assets were vested and for what purpose remains at the centre of all claims by the multiple parties fighting for his prized iron ore tenement, Hope Downs, which is worth many billions of dollars.

Within the family, Ms Rinehart and her brother, John Hancock, continue to argue their grandfather wished for the four grandchildren to inherit Hope Downs under the foundation’s family trust.

Mrs Rinehart opposes the claim, arguing the tenement is the rightful property of Hancock Prospecting through a series of signed deeds and has sought to have her children removed from Supreme Court proceedings through technical legal arguments.

In a further Supreme Court hearing late on Wednesday, Mr Hochcroft made a bid for discovery of Mr Fieldhouse and others’ evidence, which were brought in various court proceedings relating to Lang’s bankruptcy.

Ms Rinehart has made multiple legal attempts to access documents relating to the foundation in Hancock Prospecting and her mother’s possession, which were the subject of a New South Wales Supreme Court ruling in which the presiding judge did not wish to create a “spectre” that could prove disruptive to the family’s federal arbitration.

And like Mrs Porteous, who also tried to entertain similar allegations of fraud against Mrs Rinehart and Hancock Prospecting over the solvency of Lang’s estate — which were eventually defeated in a web of hearings that also reached the highest tiers of court in the land — Ms Rinehart has yet to prove successful in legally outmaneuvering her mother.

But it was revealed in the WA court on Wednesday that Ms Rinehart was considering appealing the NSW decision and unlike what was sought in the NSW court, the majority was testimony tendered into the WA public record that, Mr Hochcroft argued, anyone could seek.

Supreme Court Justice Rene Le Miere has already acknowledged the court records did not date back to 1995, when action against Mr Fieldhouse was first lodged, but a handful of affidavits dating between 2002 and 2012 were on record.

Gina’s lawyer Christian Bova SC accepted six were up for dispute but argued the court should not be compelled to release them or others for similar reasons set out before NSW Justice Julie Ward. One being that Bianca Rinehart was seeking them for the “improper purpose” of furthering her personal claims against Mrs Rinehart and Hancock Prospecting in federal arbitration.

He suggested the release of the Fieldhouse evidence would simply save the trust a process involving Mrs Rinehart approving what documents to give her daughter, if any, at a fraction of the $282,500 cost put forward by Mrs Rinehart’s solicitors.

Now it will be for Justice Le Miere to decide whether to allow Ms Rinehart to tread where no other judge has so far.

He has reserved his decision.

Our Morning Edition newsletter delivers the day’s most important news straight to your inbox. Sign up here.