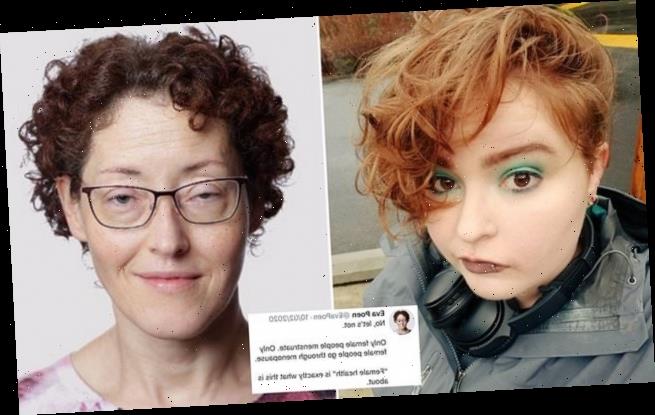 A university economics lecturer has been accused of transphobia by feminist and LGBT students over a tweet in which she said ‘only female people menstruate’.

Furious undergraduates at the University of Exeter condemned Dr Eva Poen accusing her of ‘openly singling out trans people’ in the posts.

‘Stay in your lane, Aviva. We don’t tell you how to do insurance; it would be great if you could stop telling women to give up their hard earned place in society. Women’s sport is not yours to give away.’ 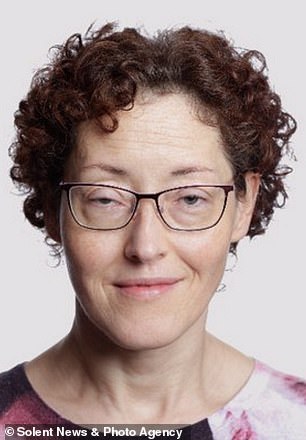 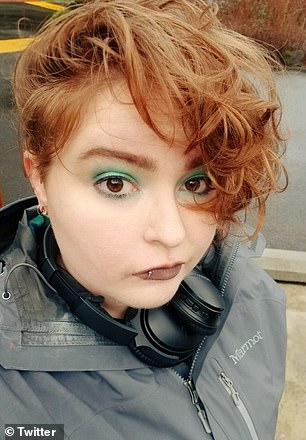 The row erupted when Dr Poen (left) responded to a tweet by a Twitter user called ‘Lilo the Autistic Queer’ (right, her twitter profile image) which read: ‘Not everyone who menstruates is female. Not everyone who is female menstruates. Let’s shift our language’

Deloit, 22, who identifies as non-binary, claimed the lecturer’s comments are an ‘attack on trans people’.

The second-year history student said: ‘What she is doing isn’t a debate. It’s constant harassment and discrimination. I don’t think anyone who sees her tweets can say that they are not an attack on trans people.’

‘She can try to define us out of our existence, but we are still here. The fact the university tolerates her is really frustrating,’ Deloit, who identifies as they, added.

A spokeswoman for the university’s Feminist society said: ‘It’s shocking that a lecturer at the University of Exeter would feel so comfortable saying such transphobic comments publicly.

‘Dr Poen is a person who is in regular contact with students. If there are transgender and non-binary people in her lectures who are having to interact with someone who holds these transphobic views – it is very distressing for those communities. 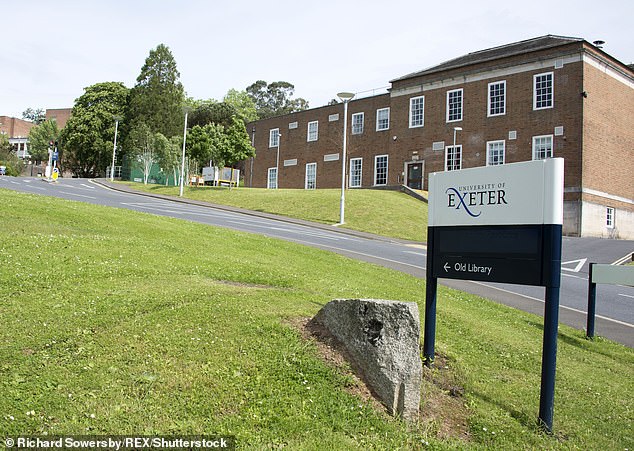 A spokesperson for the University of Exeter (pictured) said: ‘We support free speech within the law and expect people to conduct any debate with courtesy and respect for all’

‘The university must investigate the allegations thoroughly and look at it from, if nothing else, a well-being standpoint for groups of students within that community.’

Dr Poen has been slammed on Twitter for her comments, with angry users saying she needs to be reported and reprimaded for ‘spreading vitriol’.

Twitter user ‘Roshi’ denounced the lecturer’s comments, insisting they ‘ARE attacks on the Transgender community and they should be condemned’.

‘Roshi’, who identifies as ‘she/her’, added: ‘Sometimes people need to be called out so that they can change. I’m explicitly not asking for her to be cancelled. But reprimanded and understand that she is actively harming people.’

The user later tweeted: ‘My goal is for her to stop spreading vitriol so that our trans+ community at Exeter don’t have to live in fear.’

Another twitter user ‘ru {she/her}’, who is a student at the university, tweeted: ‘Yo pals there’s a lecturer at my uni who is tweeting some pretty unsavoury, transphobic shit – if you have a min could you pls go and report her tweets.

Dr Poen has shown support for Maya Forstater, a researcher who lost her job at the Centre for Global Development (CGD) think tank after tweeting that transgender women cannot change their biological sex.

The economics lecturer, who has worked at the University of Exeter for nearly nine years, tweeted: ‘Going through the £IStandWithMaya hashtag, finding lots of new people to follow.’

In her Twitter bio, Dr Poen describes herself as: ‘Female economist. Not cis. Not a manifestation of a universal existential condition.’

She insists there needs to an important debate about sex and gender and said: ‘I am a staunch supporter of academic freedom and freedom of expression. The accusations against me… are completely false.

‘There is an important political and academic debate to be had about sex and gender; we ought to be able to have this debate in a rigorous, robust, but also respectful manner.’

A spokesperson for the University of Exeter said: ‘We support free speech within the law and expect people to conduct any debate with courtesy and respect for all.

‘We’re not going to comment on an individual but of course academic freedom and freedom of speech are fundamental to our university. In the pursuit of new knowledge, free and open debate is crucial.’