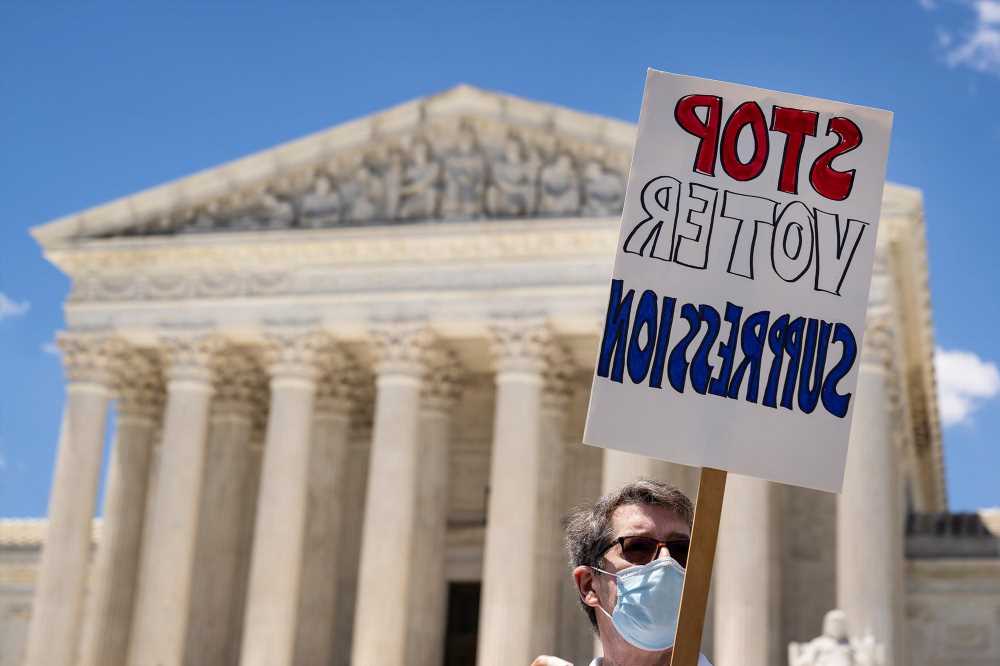 “Today’s ruling is another blow to voting rights,” Sen. Ed Markey (D-Mass.) tweeted Thursday of the court ruling in the Arizona case, “We have no time to waste to protect the right to vote. We must abolish the filibuster and pass the For the People Act and John Lewis Voting Rights Act.”

“And we must expand the Supreme Court,” he added.

The court ruled 6-3 for the Republican-passed legislation, saying that the bills do not violate the 1965 Voting Rights Act.

“Today, the Supreme Court once again gutted the Voting Rights Act,” Rep. Mondaire Jones (D-NY), wrote on Twitter. “If we don’t expand the Court soon, we will no longer have a democracy to protect. What are we waiting for?”

In a retweet that bemoaned Senate Minority Leader Mitch McConnell (R-Ky.) confirming three justices to the bench under President Trump, Jones added that, “And still some people have the nerve to question whether Court expansion is necessary.”

Rep. Ayanna Pressley (D-Mass.) also wrote on Twitter to slam the Arizona decision, claiming it “yet another attack on our voting rights.”

“Congress must act. Abolish the Jim Crow filibuster. Pass the For The People Act. Pass the John Lewis Voting Rights Act. Expand the court. Save our democracy,” she added.

House Speaker Nancy Pelosi immediately vowed to not bring the bill to the floor for a vote, however.

“I support the president’s commission to study a such a proposal,” she said, going on to say that she and her members were focused on President Biden’s infrastructure package and not the federal judiciary.

As for whether she would eventually support packing the court, Pelosi said the jury was still out.

“I don’t know that that’s a good idea or bad idea. I think it’s an idea that to be considered. And I think the president’s taking the right approach to, to have a commission to study such a thing,” the top-ranking House Democrat said, calling Biden’s move itself “a big step.”

During the 2020 Democratic presidential primary, Biden said multiple times he did not support packing the court, vowing in an interview with Iowa Starting Line that Democrats would “live to rue that day.”

During a primary debate, the then-Democratic front-runner warned that adding more justices to the nation’s highest bench was capable of backfiring.

Facing pressure from the left following a few months in office, however, Biden signed an executive order last week creating a commission to look into the matter.

The commission would be “comprised of a bipartisan group of experts on the Court and the Court reform debate,” the White House said at the time.

But Republicans and legal purists have decried the idea as “court packing,” warning it will undo the Supreme Court’s historical insulation from politics.