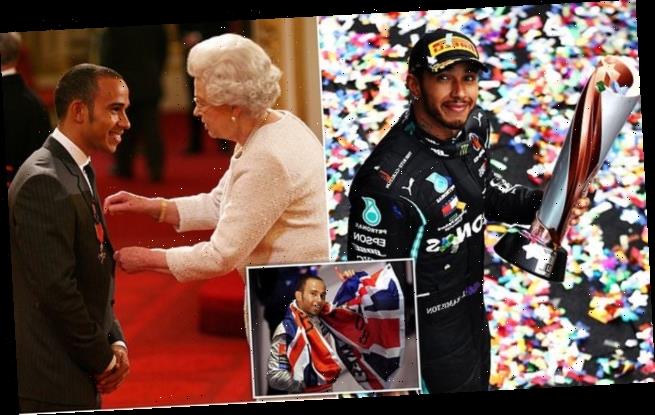 Lewis Hamilton will be awarded a knighthood in the New Year’s Honour list after winning his seventh world championship this year.

The Formula One champion, 35, will receive the gong despite his controversial tax affairs. 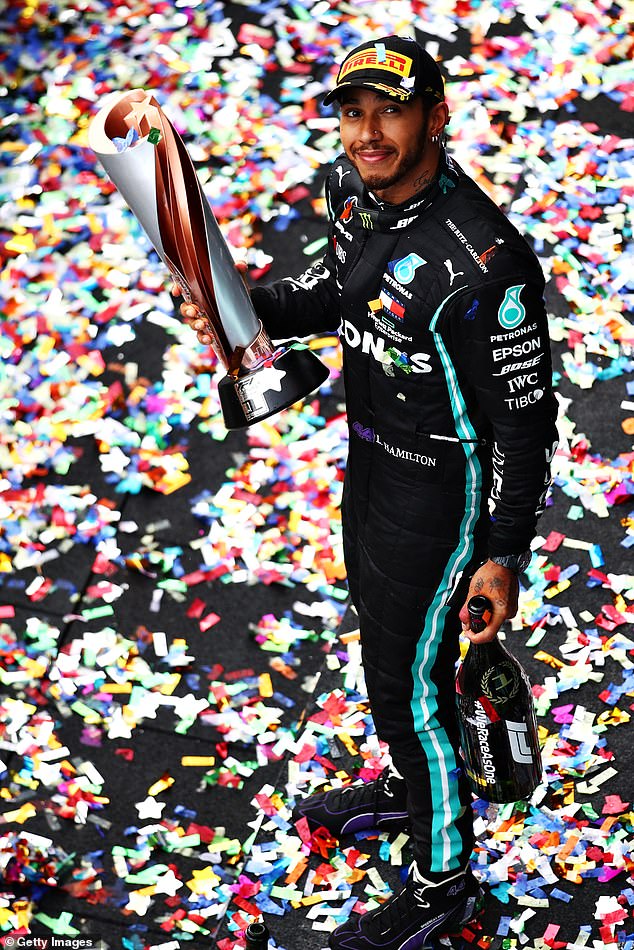 Hamilton made F1 history last week when he equalled the legendary Michael Schumacher’s record with a seventh world-title win. Nobody has won more driver championships than the pair in the sport.

Hamilton himself has previously played down the calls for a knighthood, saying: ‘I’ve not saved any lives, I’m not an unsung hero like NHS staff or Captain Sir Tom Moore.’

But he told the BBC that if the honour was to be bestowed on him, it would be the happiest day of his life to meet the Queen again.

He said: ‘Like everyone, I’ve grown up adoring the royal family, if one day I am honoured to be up in front of the queen again, it would be the happiest day ever to see here again, she’s an icon, such an incredible individual.’

The driver, pictured receiving his MBE from the Queen in 2009, will receive the gong despite his controversial tax affairs

The champion, who has often spoken out on issues of race, has been lauded as one of Britain’s greatest ever sportsman

The racer, estimated to be worth £250million, is a resident in tax haven Monaco.

A friend said: ‘This is an honour that has eluded Lewis for so many years. It marks an incredible end to the most wonderful season.’

Another said: ‘He is paying the right amount of tax — all that is due.

‘He has been put forward by industry bosses in recognition of his enormous contribution to the sport.’

The driver’s tax arrangements, which were legal, allowed him to save £3.3million by registering a £16.5million private jet on the Isle of Man.

Hamilton’s accolade comes after his vocal support of the Black Lives Matter movement, especially in the wake of George Floyd’s death.

And in an interview with BBC News on Thursday morning, Hamilton opened up about how his upbringing made him more determined than ever to spark change – urging youngsters not give up on their dreams.

‘For the kids out there who dream the impossible, do not give up on that dream because I am living proof that you can manifest your dreams and even the impossible ones,’ he said.

‘I remember as a kid; adults, teachers, parents of other drivers telling me that I would not make it. “You’re not going to make it, go back to your country.”

‘All these horrible things and I remember thinking I’m going to prove you wrong.

Hamilton is now the most successful driver in Formula One history. He has more race wins than Michael Schumacher (the pair pictured in 2012) and has matched his championship win record

‘The message is for all the kids out there who feel they don’t have a voice and might be dreaming of something or want to dream big.’

At 35-years-old, he still feels the passion to continue fighting for success not only on the track, but also away from it as a key campaigner and importance voice calling for greater racial equality and diversity.

It comes after he recently asked for more time for himself in his bumper new £120million Mercedes deal.

The champion has been away from his family even more this year amid the coronavirus pandemic and the exhaustive demands of competing at the top have led him to demand more personal days be included in the deal, expected to be finalised soon.

He told the BBC: ‘I’m going to be spending time with friends and family, creating memories, if we get to start travelling more, its about taking my family somewhere and creating memories with them and celebrating with them, just being around them because this year I’ve not been able to see them.

And when asked if he’d have more time to himself carved into his new deal, he responded with a knowing smile.

‘Potentially… that’s always a part of the conversation, I need more time, I think this year has shown for example that you can work from home.

‘I’m sure there will be a lot of Zoom days in the contract rather than present days which means I have to fly less, which is good.’

IN NUMBERS: HOW LEWIS HAMILTON COMPARES TO MICHAEL SCHUMACHER

Here is how two of the sport’s most successful drivers compare to one another.

Schumacher won seven championships, two with Benetton in 1994 and 1995 and then an unprecedented five on the spin for Ferrari at the turn of the century.

A controversial driver, he collided with Damon Hill and Jacques Villeneuve at the 1994 and 1997 championship deciders, before he was adjudged to have deliberately parked his Ferrari at Monaco in 2006 to prevent Fernando Alonso from setting a lap in qualifying.

Little is known of Schumacher’s current medical health following a skiing crash on holiday with his family in the French Alps in 2013.

Hamilton was the youngest world champion when he won his first title in 2008 – a record since broken by Sebastian Vettel – and 12 years later he is firmly among the elite.

His tally of victories, pole positions and podiums is the most ever and he is set to gun for a record-breaking eighth championship next season.