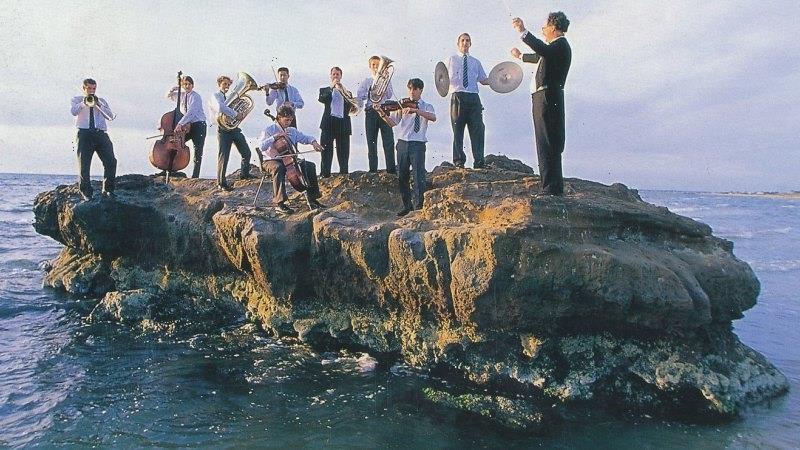 Born and educated in Melbourne, Harold Lewis Plumridge (always known as Lewis) served for 27 years as director of music at Mentone Grammar School. He had attended the school as a youngster before winning a music scholarship at Trinity Grammar School, Kew, with its close choral association with St Paul’s Anglican Cathedral.

A talented keyboard performer, Lewis studied piano with Roy Shepherd while taking his bachelor of music degree at the Conservatorium of Music, the University of Melbourne. He took up organ study with John Mallinson, the legendary director of music at Camberwell Grammar School, completing his academic courses with the university’s diploma, and then degree, in education.

Called up for national service in 1970, Lewis was quickly recognised for his outstanding musical gifts and was posted to the band of the Royal Military College Duntroon, playing clarinet, but also performing as one of the organists at the ANZAC Memorial Church of St Paul at the college.

As so often with army life there were moments of both sadness and humour, Lewis recalling the occasions when he would take the organ at a memorial service for a Duntroon graduate killed on active service in the Vietnam War, or parade with the band at a significant commemorative event. when on one of the latter occasions the band store had failed to provide Lewis with a clarinet, an undaunted Lewis marched in step with the band while expertly twiddling his fingers over an invisible instrument, no one being the wiser, in the best military tradition of “carrying on”.

On completion of two full years of military service, Lewis took up a four-year appointment as director of music at Trinity Grammar School before moving with his wife, soprano and Sun Aria winner, Carole McKenzie, to London where he lived, worked and performed for five years, becoming head of music at Whitmore High School, Harrow, and organist at St Gabriel’s Church of England, Cricklewood. 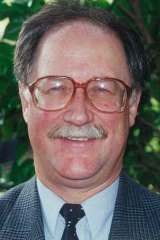 Lewis Plumridge was a passionate director of music at Mentone Grammar (1981 to 2008), touching the lives of many students.

On his return to Australia in 1982, Lewis took up an appointment as director of music at his other alma mater, Mentone Grammar School, where he not only raised the standard of instrumental and choral music to unprecedented heights but also became the music director for a wonderful series of musicals and operas. Generations of Mentonians will recall with great pleasure their enthusiastic participation under his baton in productions such as Oliver, The Pirates of Penzance, Camelot and Guys and Dolls – indeed, Lewis would send the whole school home singing.

There were two aspects of Lewis Plumridge’s musical direction on which he concentrated most particularly, and which occasioned both the school and him a great deal of justifiable pride – the Symphony Orchestra with the Festival Choir, and the Chapel Choir. 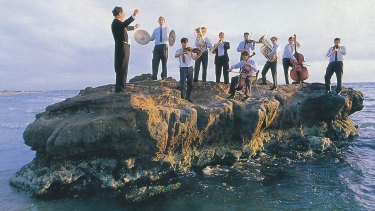 Robed in school colours of blue and white provided lovingly by the Mothers’ Association, the all-boy choristers of the latter (treble, alto, tenor, bass) sang at all appropriate services at this Anglican School and, especially, for the Christmas service of Nine Lessons and Carols at St Paul’s Cathedral, where their reputation for musicianship, discipline, enthusiasm and good conduct made them a particular favourite of the cathedral staff, resulting in their selection at short notice to provide the choral music at the national memorial service for the 18 SAS soldiers killed in the Black Hawk helicopter disaster.

Meanwhile at school, Lewis established the annual chamber music concert, with solo and ensemble performances interspersed with witty comments from the director and Lewis’s own choice of outrageous musical anecdotes from Bach to Beecham. Then there were the great gala performances in the Thorold Hall or the Hamer Hall or the Blackwood Hall at Monash University, from symphonies and concertos (Bach’s Double Violin Concerto, for instance) to vocal offerings by soloists (some of them taught by Carole Plumridge) and by the huge and joyous Festival Choir.

But the foundation for all this musical excellence was the curriculum which Lewis personally devised for the school, with specialist teaching given to all year 7 and 8 boys in the music school’s ensemble rooms, which were dedicated separately to strings, woodwind, brass and percussion instruments – every boy, hands on, and increasingly musical. The incoming headmaster of 1988 was left in no doubt by an impassioned Lewis that such teaching had to be an integral part of the school’s academic curriculum.

A staunch Anglican by education and personal faith, Lewis was for many years both organist and choirmaster at his local parish church, turning at a moment’s notice from a carols service at St Paul’s Cathedral to the annual lessons and carols at St Peter’s, Box Hill, where he continued to perform and conduct almost up to his death on September 28 following a brave battle with cancer.

Lewis is survived by wife Carole and sons Christopher and Richard and their families.