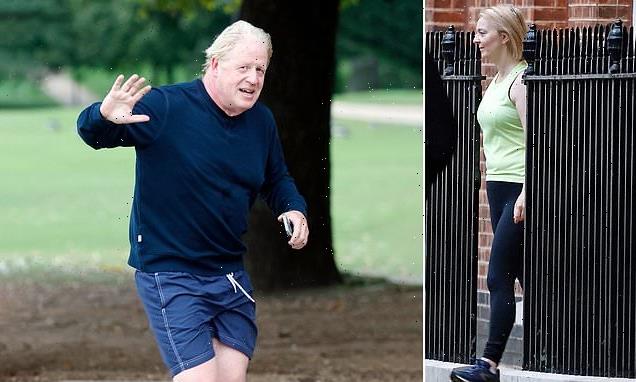 Liz Truss heads out for early morning work-out: PM leaves Downing Street in her exercise gear – as Boris dons his running shorts and trainers for jog through London park

Liz Truss headed out for an early work-out as Boris Johnson also donned his sports wear for a jog around the park today.

The new Prime Minister was seen leaving Downing Street in her exercise gear, ready to take to the streets of a chilly London morning, with temperatures dropping to about 12C.

Meanwhile the former PM donned his shorts, a casual jumper and trainers as he jogged through the capital, waving to the cameras as he went.

Mr Johnson is known to regularly enjoy a morning jog and is often seen taking his steps – and his dog Dilyn – through St James Park and central London.

The new PM also starts most days with early-morning runs and is known to go to the Archbishop of Canterbury’s 12th Century Thameside garden at Lambeth Palace in the company of hand-picked advisers.

The aim is to help her to thrash out solutions to the intimidating set of issues filling up her in-tray. She then returns to No 10 to shower, ready to hold her first meeting at 8.30am at her desk in the Cabinet Office. 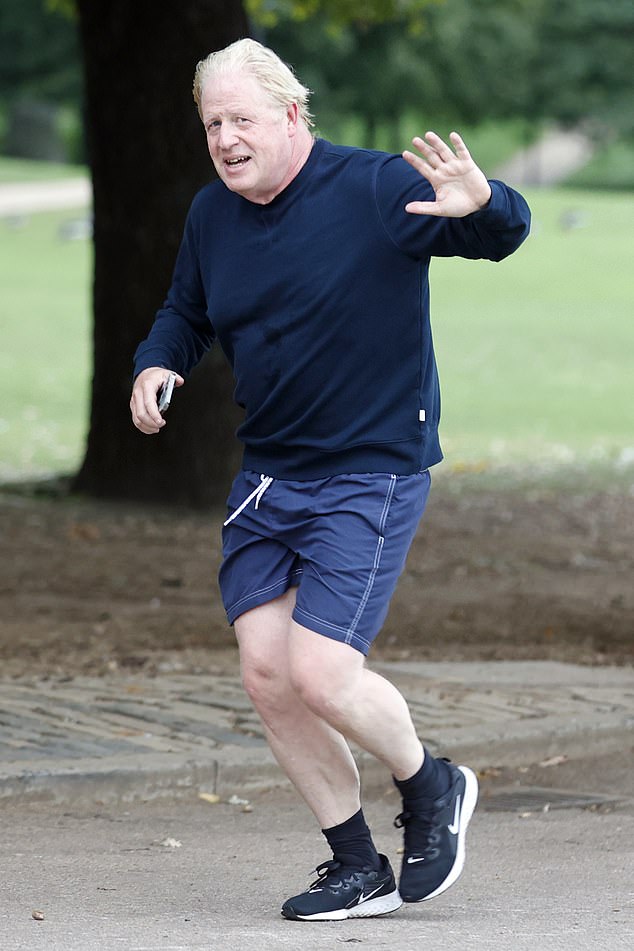 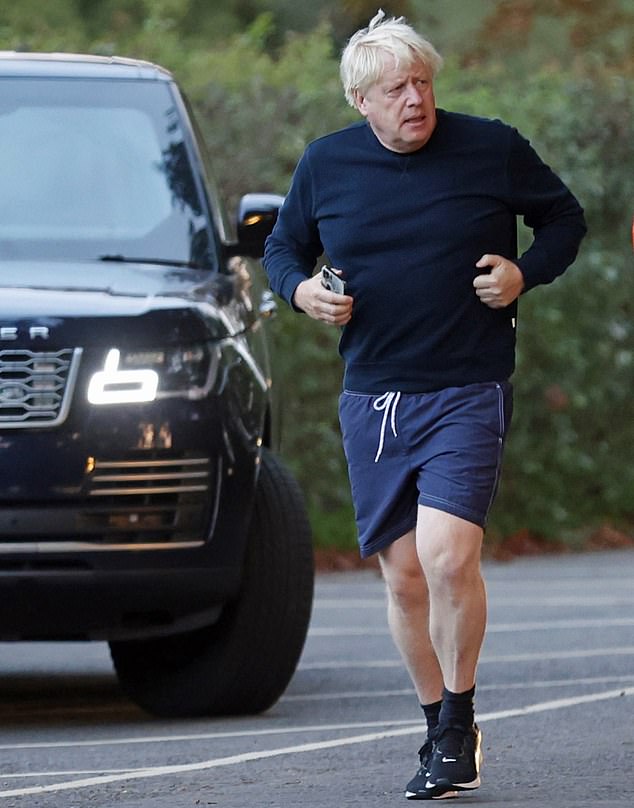 Ms Truss was first offered the use of Archbishop Justin Welby’s London residence a few days before she was declared the winner of the Tory leadership contest on September 6.

Lambeth Palace has one of the largest private gardens in London – at ten acres – and is one of the oldest continuously cultivated gardens in the country, having been founded in 1197.

When Ms Truss moved into Downing Street with husband Hugh and their two daughters she told officials that she wanted ‘regular exercise sessions’ included in her diary – and, where possible, to combine them with meetings.

As she jogs around the grounds, she asks members of her inner circle for ideas to solve the cost-of-living crisis, high energy bills and the problem of low economic growth, as well as the NHS backlog and thorny issues such as the extent to which the Government should intervene in the ‘culture wars’ over woke issues.

Iconic runs for the former PM include footage last year which showed Mr Johnson running just a few yards to his hotel after getting out of a car in front of a pack of photographers.

The then Prime Minister left his Manchester hotel before sunrise for a jog ahead of his key note speech to the Tory Party conference in October.

It came just three days after Mr Johnson was photographed running in a suit shirt and shorts with black socks after appearing to have forgotten his sports kit.

He was also wearing black shoes that looked suspiciously formal – although aides insisted they were in fact trainers. 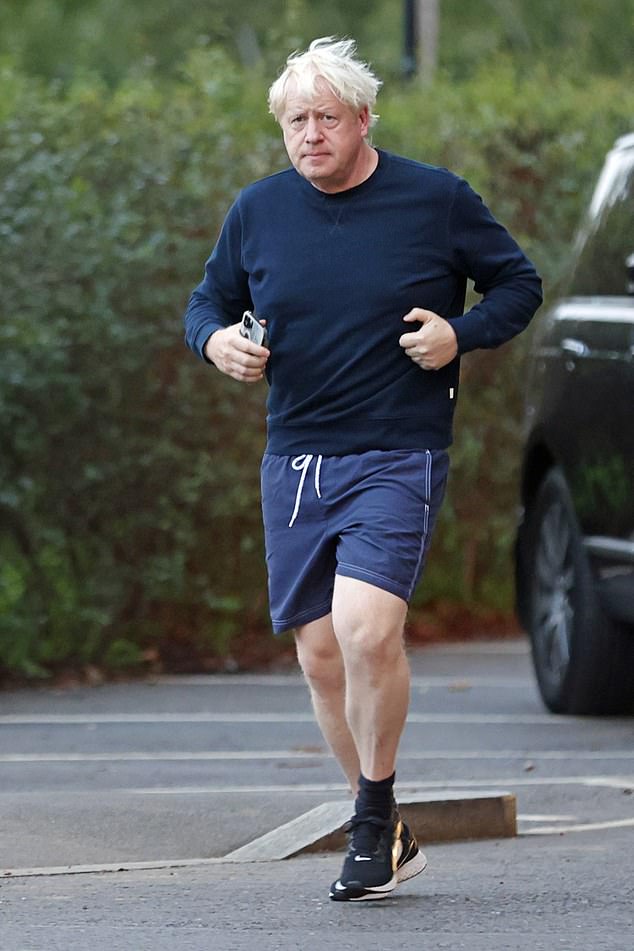 The former PM donned his shorts, a casual jumper and trainers as he jogged through the capital 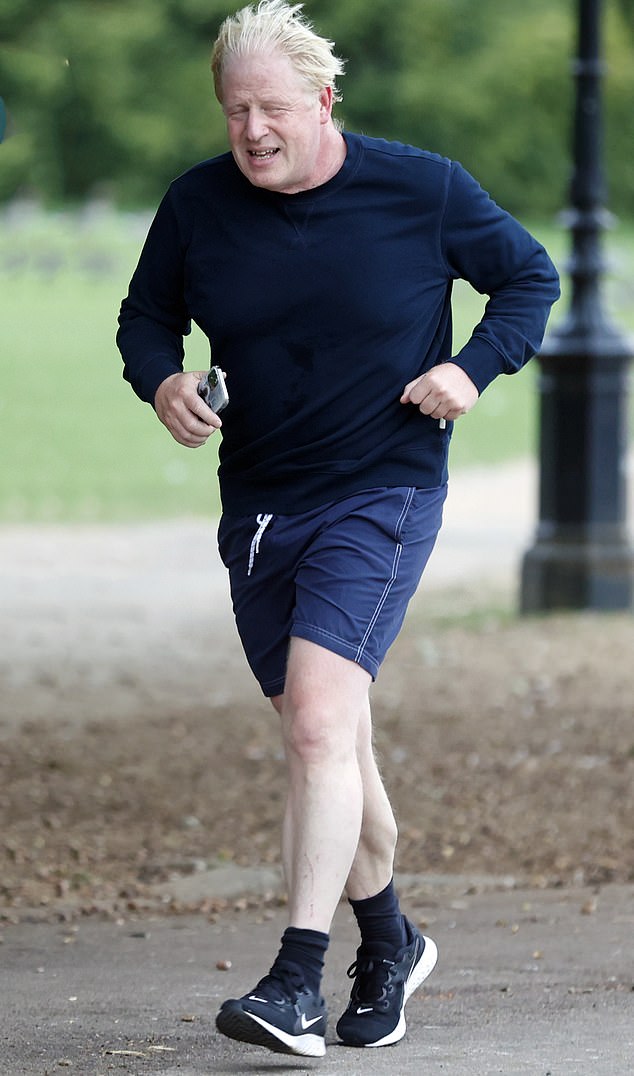 It comes as Ms Truss faced questions over the ‘declining’ sterling.

Shai Weiss, chief executive of Virgin Atlantic, urged the Prime Minister to take a ‘difficult decision’ which will boost the currency’s value.

Economists fear sterling could slump to parity with the US dollar this year for the first time. It sat at about 1.08 US dollars on Tuesday.

Speaking at a press conference in central London, he said: ‘The weakness of the pound is hurting, not Virgin Atlantic, it’s hurting the economy and it’s hurting consumers because it’s actually fulfilling or fuelling the inflation vicious cycle that we’re in.

‘We buy planes and fuel in dollars. Thankfully we took some very smart financial positions that will ease the burden of the decline in the pound over the next 12 months.

‘The message to Government is pretty clear in my mind. Prime Minister Liz Truss has taken difficult decisions upon entering into the role.

‘Maybe you need to take a more difficult decision to reverse the declining pound and ensure that this country is not left with unsustainable perceived weakness in international markets, which of course then impact interest rates, impact consumers, impact mortgage rates, impact the entire economy.

‘So yes, we are concerned. The fundamentals are strong, but we’re concerned of course like everyone else in this country with the economic environment in which we operate.’

Ms Truss also faces the first Cabinet revolt of her fledgling premiership over plans to ease immigration rules to help boost the economy.

Senior figures including Home Secretary Suella Braverman and Business Secretary Jacob Rees-Mogg are believed to be unhappy at a possible relaxing of rules governing the shortage occupations list.

These are jobs where there is a particular lack of people to fill posts and the cap on numbers limiting arrivals to 30,000 to 40,000 people could be raised.

Other relaxations could include watering down the requirement to speak English to a certain proficiency, the Telegraph reported.

A source told the Daily Telegraph: ‘The Home Secretary does not believe that reducing net migration needs to mean we go to lower growth. You can achieve both. You can solve the economic bottlenecks that need to have higher skills but at the same time bring down aggregate migration.’

However a Downing Street source insisted that the plan would involved ‘increasing numbers in some areas and decreasing in others’.

‘As the Prime Minister has made clear, we also want to see people who are economically inactive get back into work,’ they added.