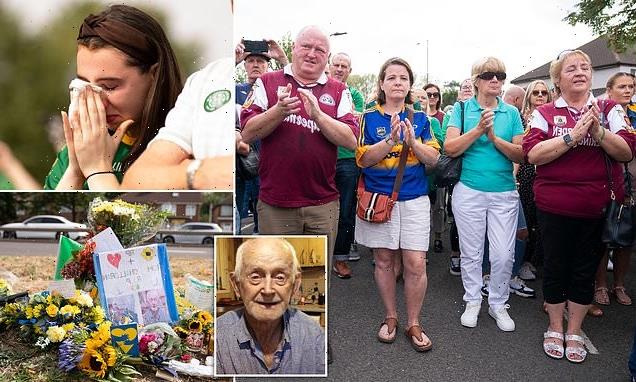 More than 100 members of London’s Irish community gather to pay musical tribute to busker Thomas O’Halloran, 87, who was stabbed to death on his mobility scooter

Members of the Irish community gathered to pay tribute this morning to Thomas O’Halloran, who was stabbed to death as he rode his mobility scooter in London on Tuesday.

More than 100 people, many wearing sports jerseys, came together on Cayton Road in Greenford, near to where Mr O’Halloran was killed just five days ago, for a musical tribute to the ‘loving’ busker.

They commemorated the 87-year-old with prayers and Irish music, and local musicians played several songs, including Now I’m Easy by the Dubliners.

Mr O’Halloran, originally from Ennistymon in County Clare, Ireland, was known to busk regularly by Tesco and the train station in Greenford and tributes included songs he performed.

He played the accordion and had recently been busking to raise money for Ukraine, when he would have the country’s flag draped over the front of his scooter.

Ambrose Gordon, 61, said his friend would have ‘loved’ the tribute.

‘He’d be there on his little trolley and he’d have been playing his tunes and things like that,’ he said. 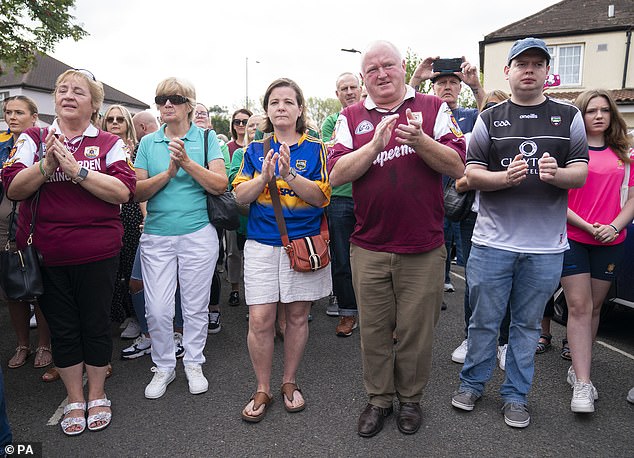 Members of the Irish community gathered to pay tribute this morning on Cayton Road in Greenford, near to where Thomas O’Halloran was killed just five days ago 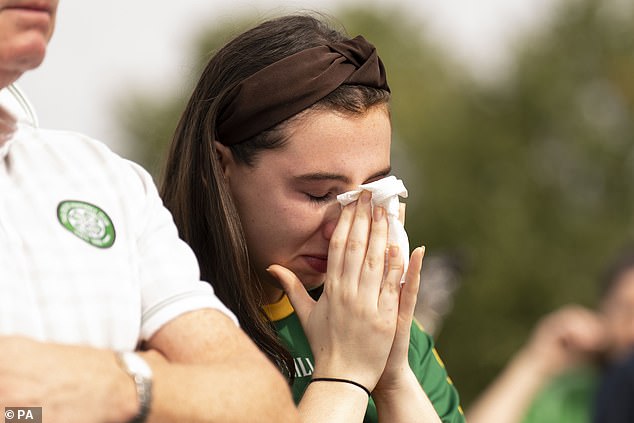 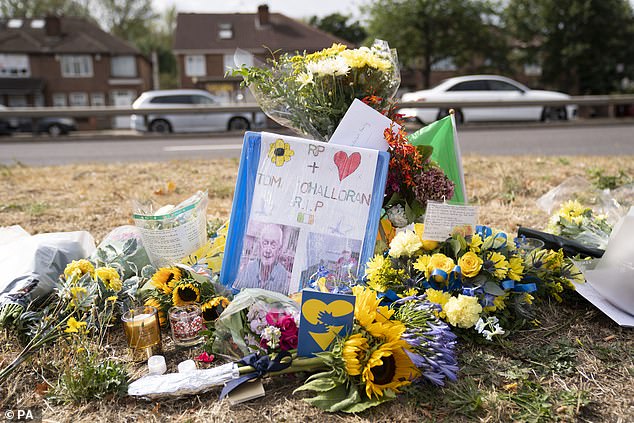 Before the ceremony, flowers, candles and a vial of holy water were laid at the site near where Mr O’Halloran was stabbed 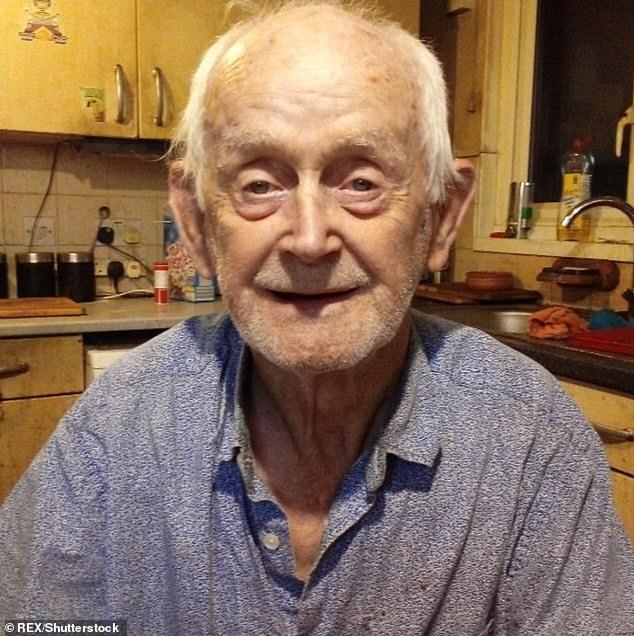 Thomas O’Halloran, 87, (pictured) originally from Ennistymon in County Clare, Ireland, was known to busk regularly by Tesco and the train station in Greenford and tributes included songs he performed

Mr Gordon, originally from County Galway, added: ‘I’m 60 years here and I have seen occasions, all kinds of occasions, and we are a very strong community, very, very strong.

‘We came from every county today. We all wore our jerseys, so we’re very proud Irishmen, despite the fact we’re here 60 years.’

Mr Hehir, from nearby South Harrow, said: ‘I have lived here for 29 years. It’s a shock, the way it happened. I mean, there’s a lot of tragedies in London and in the wider place and all throughout the world, but it’s a very, very sad thing.’ 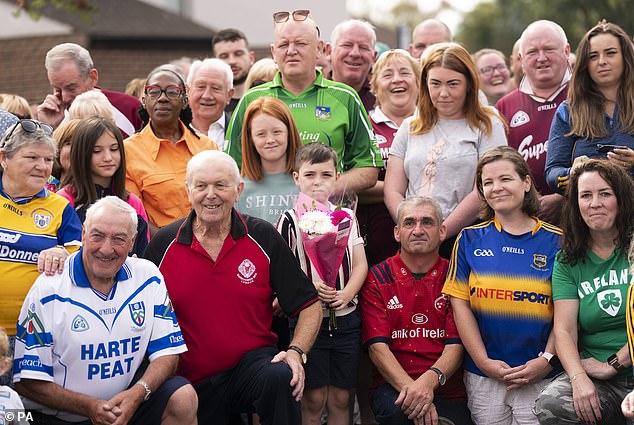 More than 100 people turned out to remember the ‘kind and gentle man’, with many wearing Irish sports jerseys 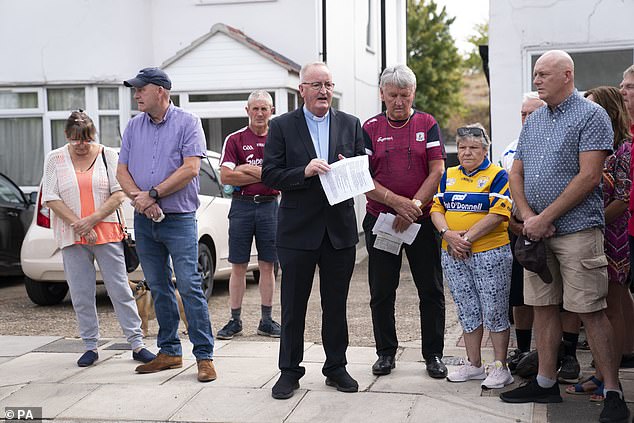 He described Mr O’Halloran as ‘very quiet and professional’, adding: ‘he was a very loving man and a very caring man, and he was ‘trying to collect for Ukraine, for the appalling disaster there.

‘He will be very well remembered for everything he’s done for the community.’

Mr Hehir described the event as a ‘sad occasion which turned into what I would call not joyful but the easing of people coming together. I think it meant a lot to the family and to all of us’.

Before the ceremony, flowers, candles and a vial of holy water were laid at the site near where Mr O’Halloran was stabbed.

One tribute read: ‘They will rejoice at the sound of your music. Heaven is special because you are there.’

‘In the face of this kind of awful incident, we don’t know what to do and people feel completely helpless.’ 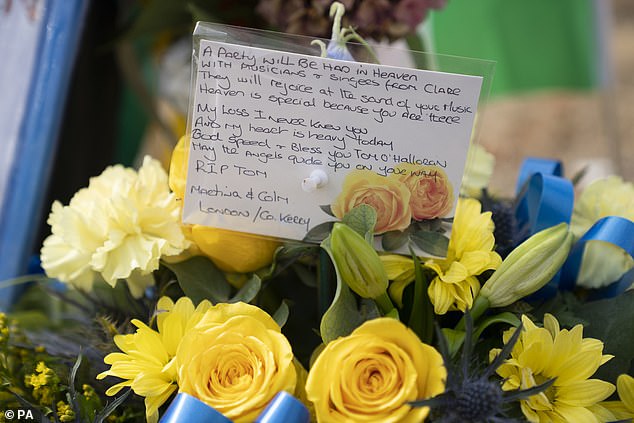 One tribute read: ‘They will rejoice at the sound of your music. Heaven is special because you are there.’ 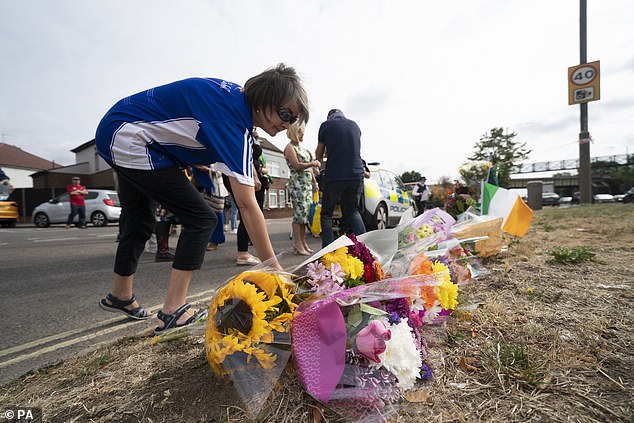 People laid flowers on Western Avenue, near to the alleyway where Mr O’Halloran was stabbed on Tuesday

Mr O’Halloran left the village of Ennistymon for London where he pursued a career in engineering, his family told the MailOnline earlier this week.

They spoke of their devastation at his death, with his younger brother George, 74, saying:  ‘Tommy was a kind and gentle man. He was a very kind person who would get along with anybody. This was a terrible thing to have happened.’

George welled up in tears as he continued: ‘He left Ennistymon 70 years ago to find better opportunities in London. But he came back every year. 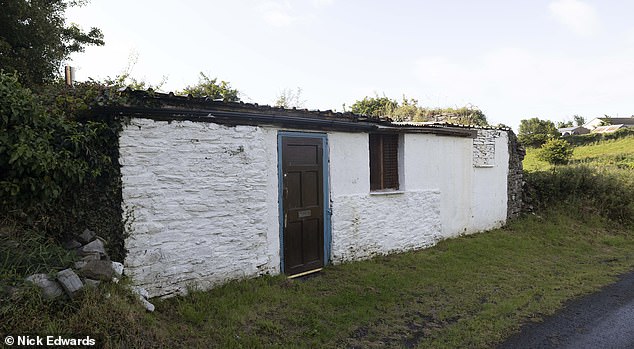 Mr O’Halloran was one of 14 children born in this tiny cottage on the outskirts of Ennistymon in County Clare, Ireland

‘He loved to play music. He did not drink or smoke but he could sit in a bar all night long with a bottle of coke and listen to the band play.’

George, a retired fireman, revealed how Mr O’Halloran was one of 14 children born in a tiny thatched cottage on the outskirts of Ennistymon.

He explained: ‘It did not have any electricity or running water. We would sleep in the cottage, wash and shave at the well across the road, and go to the lavatory in a bush. It was another time.’

George told how the wider community in Clare has been shocked to hear of his brother’s death – and said Mr O’Halloran is survived by just two of his siblings as well as a larger number of nieces and nephews.

On Friday a man appeared in court charged with his murder. Lee Byer, 44, of Southall, was remanded in custody at Willesden Magistrates’ Court and is expected to appear at the Old Bailey next Tuesday.