A takeaway coffee from a Shepparton cafe was all it took to send Amy DePaola into quarantine for 10 days. Had she arrived 10 minutes later, she might have been spared.

“That sent the entire family into lockdown,” she said. 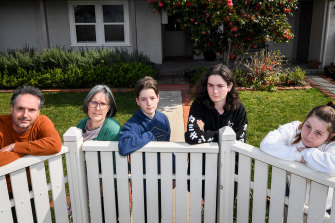 But with exposure sites in Shepparton surging past 125, there’s every chance one of her five family members might have visited a tier-one location anyway.

Despite the stress of quarantining, Ms DePaola considers herself lucky.

“As well as stress it’s mixed with gratitude for what we have,” she said. “We’ve got a good home with heating and reasonably stocked pantry.”

She said other families who struggle to afford food and essentials are not as fortunate.

This week Shepparton, which is 190 kilometres north of Melbourne, became Victoria’s fastest-growing coronavirus outbreak as confirmed cases climbed to 79 on Friday.

As infections rose during the week in the city of about 70,000, informal support systems began to deteriorate as more residents were required to isolate and people were unable to rely on each other for food deliveries.

More than 20,000 people have been in isolation, sparking fears of food shortages with supermarket deliveries hampered because so many employees have had to quarantine.

Registered nurse Sikholiwe Tshaka was among those required to isolate immediately when a positive case was recorded at his daughter’s school. 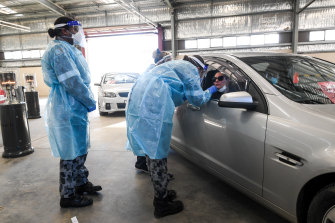 A friend dropped off food to the Tshaka household of six, but then that person discovered he also had to isolate.

“All our contacts who could help us were already in quarantine,” Mr Tshaka said.

He tried ordering groceries online, but supermarket deliveries were taking up to 72 hours. The Tshakas have since received a delivery from FoodShare Shepparton.

Goulburn Valley Health chief executive Matt Sharp said one of the greatest challenges of the outbreak was that so many schools had been listed as exposure sites. 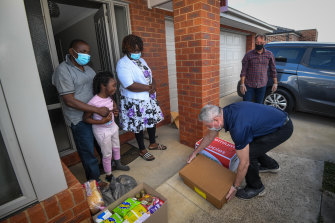 The Tshaka family receive a delivery of fresh fruit and vegetables on Friday. Credit:Justin McManus

Mr Sharp said some of those schools have up to 1500 students, sending many families into isolation. At least 500 Goulburn Valley Health staff were furloughed, many of them connected to the schools.

On Thursday Australian Defence Force personnel were called in to assist with testing and home visits to ensure people were isolating.

But Mr Sharp said too many people are still not coming forward for testing, particularly after visiting an exposure site.

“We’re in a really challenging period in the outbreak because we still don’t have the information we need in terms of testing data to be able to have a total picture of exactly what’s happening,” he said. 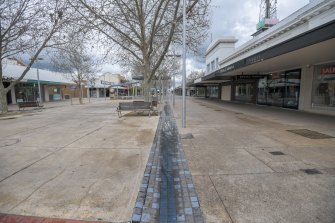 The outbreak brought Shepparton to a halt with the city centre almost deserted this week. Shopfronts were shuttered, their interiors dark. Only the occasional store – mostly takeaway food – showed any glimmer of life.

On Thursday afternoon a few solitary figures walked briskly around the glassy surface of Victoria Park Lake, which would normally be busy with people enjoying the sunshine.

Welfare and community groups from across Shepparton have come together to deliver hundreds of boxes of food each day to households throughout the region. 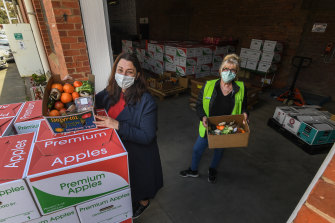 “Many people were caught out,” she said. “Not everyone has a pantry stocked full of food.”

On Friday Coles confirmed it had called in staff from other stores to boost deliveries and had resumed the collection service from its Shepparton South store.

But Freedom Foods group chief executive Michael Perich said strict quarantine requirements for secondary contacts were having a major impact on the business and dairy farmers who supplied it with milk. Freedom Foods has temporarily reduced production.

“There are no positive cases among our employees or their families but more than one-third of the community, including one-third of our workforce, is now in quarantine as secondary close contacts,” Mr Perich said.

There was some good news on Friday, with COVID-19 response commander Jeroen Weimar confirming some exposure sites would be downgraded, allowing hundreds of people to be released from quarantine once they received a negative test.

He has been doing regular food deliveries to his two daughters and four grandchildren who have to isolate.

Mr Briggs credited the Rumbalara Health Service for keeping Aboriginal voices prominent in the city’s response to the outbreak. 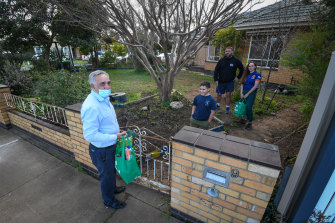 Paul Briggs delivering groceries to his family who are isolating for 14 days. Credit:Justin McManus

In addition to protecting himself against coronavirus, Mr Briggs said he got the shot because he wanted to show community leadership.

But Damian Drum, federal Nationals MP for Nicholls, which covers Shepparton, said when the virus swept through school communities, the families it predominantly affected were the young working parents who keep the economic cogs turning.