Testing by West Australian health authorities is under way to determine whether a maritime worker who returned a positive result for COVID-19 after leaving hotel quarantine was infectious in the community.

The worker travelled to Perth on a flight from Colombia via the United States in May and was placed into hotel quarantine on arrival, where he returned a negative result on day 13. 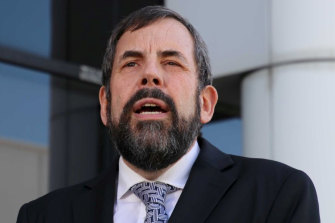 He was released from the Pan Pacific Hotel into the community on Friday but forced back into hotel quarantine less than 24 hours later after he returned a “moderately strong” positive PCR test he took for work.

The worker was one of two linked COVID-19 cases in the Pan Pacific Hotel in June, which prompted health authorities to wonder whether the virus could have spread between rooms.

The Department of Health said at the time it was told by the hotel its rooms were negatively pressured, which helps prevent the aerial transmission of the virus through corridors. How the leak occurred remains unknown.

It is unclear whether the worker was returned to the Pan Pacific.

WA Chief Health Officer Andrew Robertson said authorities suspected he was a “viral shedder” and was not infectious while in the community, however, additional tests needed to be performed.

Viral shedding refers to the act of releasing infectious virus particles into the environment and in the case of coronavirus, this can occur when a person sick with the virus talks, coughs and sneezes.

Shedding can continue for several weeks after a person’s symptoms disappear but the particles, which often get stuck to the back of the throat, aren’t always infectious.

Dr Robertson said the case was an unusual finding and reassured the community the risk of infection was very low.

“We don’t know why this happens,” he said.

After being released from quarantine at the Pan Pacific Hotel on Friday, the man checked into the Ibis hotel where he had a meal at the restaurant. He also visited an Optus telephone store on Murray Street and a nearby chemist.

He was wearing a mask and remained asymptomatic during his time in the community.

Contact tracers are currently working to identify potential contacts of the man.

Anyone who has been at any of the exposure sites should get tested but do not need to isolate unless they develop virus symptoms.