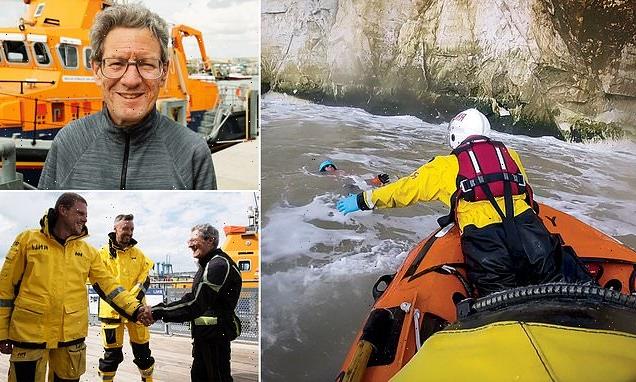 This is the dramatic moment a paraglider who thought he was going to die after he was cut off by the incoming tide was plucked to safety by RNLI crews.

Dermot Ryan was moments away from death as he sank beneath icy waves following a paragliding error.

But just as he was close to losing consciousness he was dragged from the sea by a crew from Newhaven RNLI.

Mr Ryan was paragliding on Christmas Eve last year when he landed on a small beach at the foot of some cliffs. 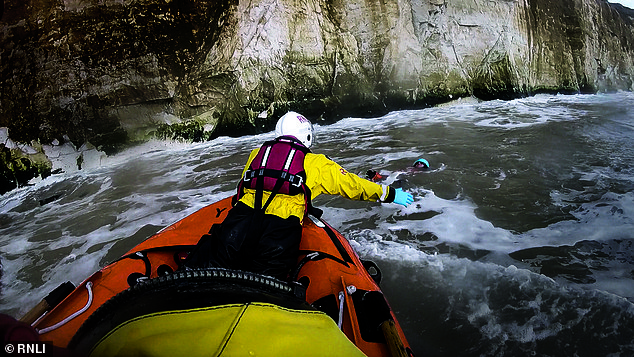 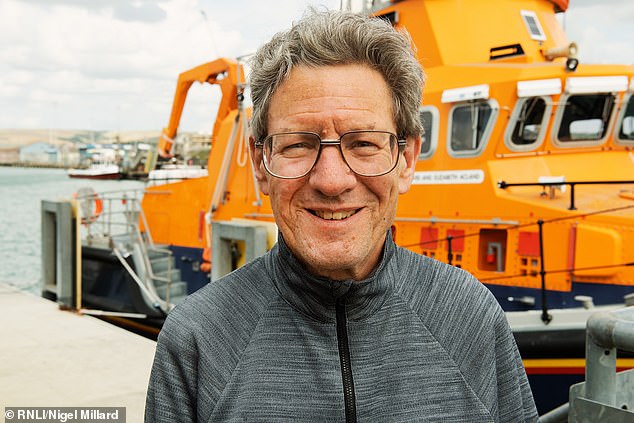 His escape route was soon cut off by the incoming tide leaving him in a perilous position.

He was able to use his phone to call for help but was soon immersed in the icy December water.

He was being thrown around by the waves and inhaling the cold water as he floated on his back.

RNLI volunteers from Newhaven responded to their pager to answer Mr Ryan’s call for help.

They launched the lifeboat and upon arrival spotted Mr Ryan from a distance floating motionless in the water appearing to be face down.

The crew has now admitted they feared it was too late to save him.

But as they got closer in their motorboat they could see he was actually facing up and still alive.

The lifeboat crew managed to navigate the crashing waves to get near enough to grab hold of Mr Ryan and pull him onboard and take him to the safety of the lifeboat station.

They are now releasing the video to show that their work never stops, even around Christmas time. 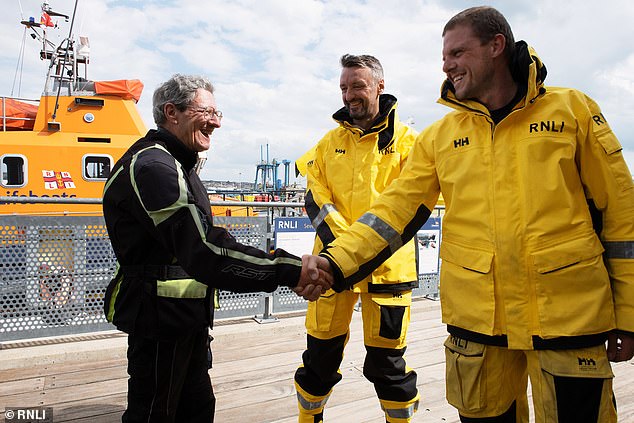 He has since met the crew who made sure he got back safely to his family that day.

Mr Ryan said: ‘If the lifeboat crew hadn’t been there, I wouldn’t be here today. That’s the simple truth. They are absolute heroes.

‘I remember looking up at the blue sky the following day – Christmas morning – and a wave of euphoria washing over me.

‘I still feel emotional thinking about it. It is so good to be alive.’

Every year thousands of RNLI volunteers will be ready to leave their loved ones behind at Christmas to answer the call, each time hoping to reunite another family, and see those in trouble at sea safely returned.

Lewis Arnold, Coxswain at Newhaven RNLI, said: ‘When we first arrived on the scene, I thought Dermot had drowned. I get a shiver down my spine every time I think about it, even now.

‘There’s no feeling quite like bringing someone home safe to their families – especially at Christmas.

‘As lifeboat crew we couldn’t have saved Dermot’s life that day without kind donations from the public which fund the kit, training and equipment we need to save others and get home safely to our families.’

Over the past decade, RNLI lifeboats have launched over 1,200 times during the festive period.

Last Christmas crews across the UK and Ireland saved the lives of eight people, the highest number recorded in five years.

The charity’s volunteer crews aided 88 people during the festive period in 2021, an 87 per cent increase from 2020 and the highest number recorded since 2018.

The RNLI is now launching its Christmas appeal as the charity asks for help to continue its lifesaving work at sea.