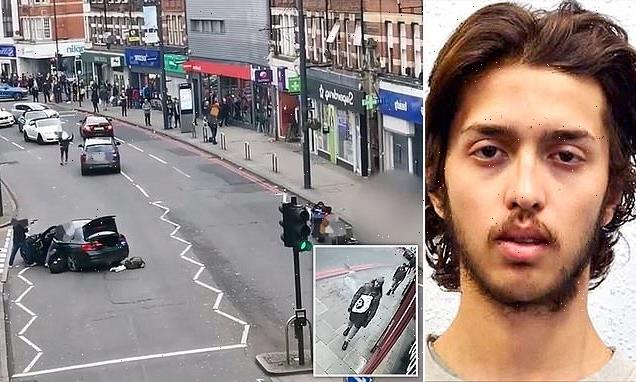 A fitting end for the budget jihadi: Moment undercover police gun down Streatham terrorist outside Iceland – as oblivious pensioner carries on trying to cross the road

Video footage shows the final moments of Streatham terrorist Sudesh Amman as he was gunned down by armed police outside Iceland.

The film shows the the 20-year-old before he was shot dead by undercover officers on the high street in south London.

It was a busy Sunday pre-lockdown afternoon when he grabbed a large kitchen knife from a hardware store and set about stabbing two members of the public at random.

Little over a minute later, he had been shot dead after pivoting to charge at two undercover police officers who had given chase, as horrified members of the public looked on.

The gravity of the situation was borne out in footage compiled from CCTV, public transport, police body-worn cameras and mobile phones belonging to members of the public.

Witness testimony at Amman’s inquest described with vivid detail the 62 seconds between him grabbing the knife and being mortally wounded. 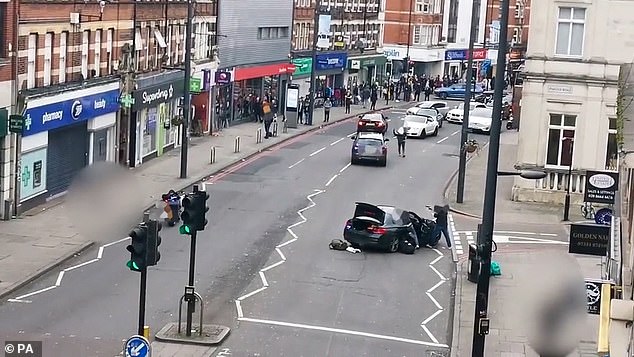 Jagmon Singh, who worked in Low Price Store on Streatham High Road, said he thought Amman ‘looked disturbed’ when the convicted jihadi walked into his shop and began browsing the knives before selecting a weapon with which to enact his rampage.

‘I thought it was a case of shoplifting,’ said an officer known as BX87, one of a dozen police witnesses granted anonymity at the inquest, and who was part of the surveillance effort on the day. A minute later, he opened fire.

Katherine Day said she saw Amman apparently ‘skipping and hopping’ up the street before lunging at targets, including a child.

She and her partner Thomas Baldwin were later commended by one of Amman’s victims for helping save his life after performing initial first aid before medics arrived on the scene. 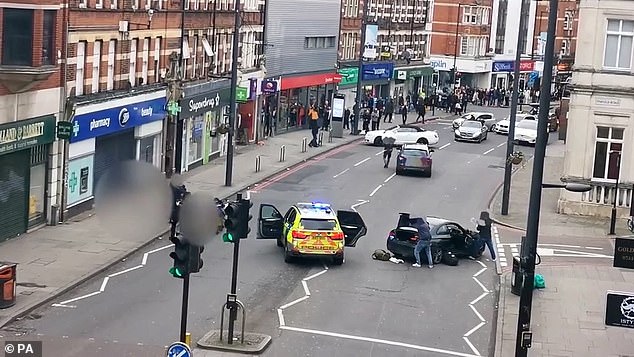 In the clip, marked police cars arrive at the scene and armed officers are seen approaching Amman, who is lying on the pavement in front of Boots’ entrance (pictured)

CCTV footage showed the street to be busy with pedestrians, so much so that nine covert police officers were able to work seemingly undetected by Amman.

Just 20 seconds before Amman burst out of the Low Price Store, and slightly ahead of his first casualty, a woman with a small child and a pushchair could be seen heading northwards along Streatham High Road.

Further along the street at Holland and Barrett, internal CCTV showed two young children standing at the shop entrance as Amman sprinted past with the knife clasped in his hand.

Four women were then seen scrambling into a Boots store on Streatham High Road. Two seconds later, he was dead.

BX87 broke down as he recalled fearing he was about to become Amman’s latest victim.

‘(It) was like a cartoon – the blade of the knife almost doubled in size,’ he said.

‘It really dawned on me at this point that I was going to get stabbed.’

Pedestrian Fida Hussain said the shooting appeared to be ‘some sort of prank that you see on YouTube or something’.

Indeed, Mr Hussain was not the only one initially failing to fully grasp the gravity of the situation, with CCTV footage showing an elderly woman resolutely trying to cross the road on the pavement across from Amman’s body, despite two armed police shouting at her to stay back.

Meanwhile, Katherine Day said she saw Amman apparently ‘skipping and hopping’ up the street before lunging at targets, including a child.

She and her partner Thomas Baldwin were later commended by one of Amman’s victims for helping save his life after performing initial first aid before medics arrived on the scene.

Amman, from Queensbury, North London, had been released from HMP Belmarsh ten days earlier after serving half of a 40-month sentence for obtaining and distributing material for terrorist purposes.

Amman had been living at a probation hostel in Streatham for ten days when he stabbed a man and a woman before turning to charge at two armed police officers who gave chase. 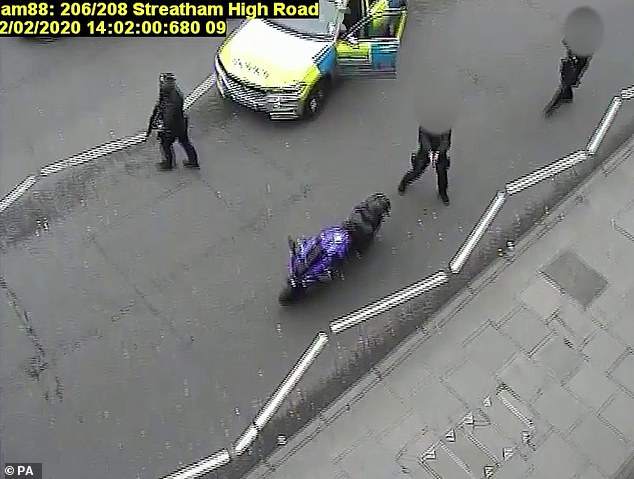 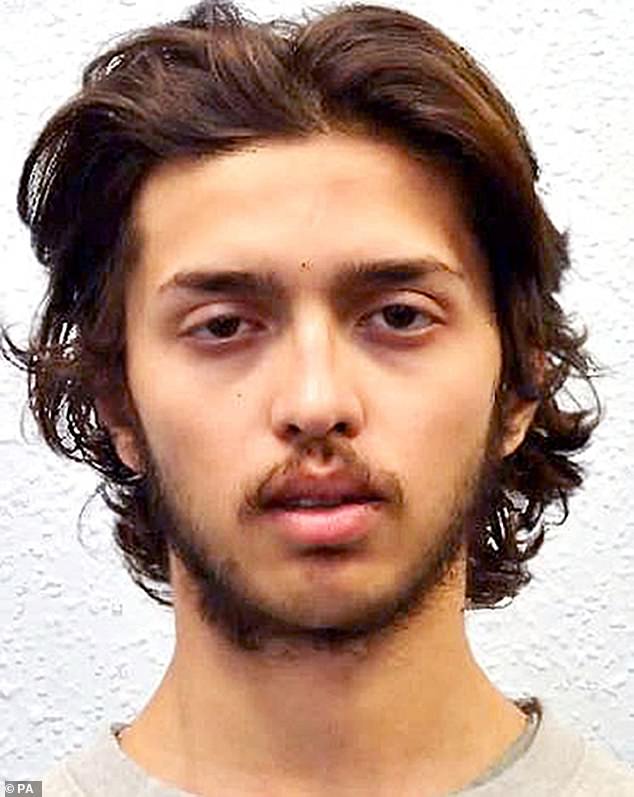 The male victim and the police officers who eventually opened fire on Amman both described fearing they would die during the 62-second rampage.

The new footage comes as inquest jurors concluded that the Streatham terror attack could have been prevented had convicted terrorist Sudesh Amman been recalled to prison.

Police and MI5 officers were so concerned about Amman two days before the atrocity – after watching him buy materials it was rightly feared could be used to make a hoax suicide belt – that they held an emergency meeting to discuss the prospect of arresting the recently released terrorist.

Here is a timeline in the case of Sudesh Amman, the convicted terrorist who stabbed and injured two people in Streatham High Road in February 2020.

But HM Prison and Probation Service decided not to recall him to jail, despite undercover officers spotting him buy four small bottles of Irn-Bru, kitchen foil and parcel tape from Poundland. He was kept under round-the-clock armed surveillance instead.

The senior investigating officer on the Amman case denied suggestions from the terrorist’s family that police should have intervened and that the undercover operation was a ‘massive failure’.

The officer said instead that the Metropolitan Police’s actions on the day he struck prevented further tragedy.

Asked about the mistakes leading to the attack, Dr Joseph Downing, a fellow in nationalism at the London School of Economics who studies security and terrorism, told MailOnline today: ‘That’s clearly incompetence. The problem is when something like this happens is that the person may do stuff in the preparation for an attack but it may be mundane. When it’s something like buying equipment for a bomb then clearly there has been an oversight.

‘Because this is something being dealt with between numerous agencies who work to different verdicts of truth, different expertise, it can happen. Like the probation services clearly doesn’t have expertise in counter-terrorism and that’s one of the problems. Working among different agencies is often the problem.

‘That’s the problem with the checks and balances according to the law. Even if the security services do say they’re identified the problem they can be overruled by other actors and that’s one of the main issues we have today.’

The inquest jury returned a conclusion of lawful killing this morning, after retiring for 11 hours to consider their finding, but said probation ‘missed an opportunity’ to send him back to prison following the Poundland trip.

Jurors concluded the decision not to search Amman’s probation hostel, or search him in person on the day of the attack, did not amount to a missed opportunity.

The coroner Mr Justice Hilliard, at the inquest’s conclusion, said: ‘Amman was prepared to risk his life… In stark contrast the Metropolitan Police surveillance teams were prepared to put themselves in harm’s way.

Amman’s family already conceded police had little choice but to shoot him, who was born in Coventry and lived in Birmingham and North West London.

And the coroner said the evidence showed the officers who shot Amman ‘at every stage honestly believed that it was necessary to use force in defence of himself and others’.

The inquest, held over three weeks in London, heard Amman was considered ‘one of the most dangerous individuals’ investigated by police and MI5, and heard evidence he maintained an extremist mindset throughout his time in prison.

He was said to have plotted to kill the Queen, pledged allegiance to so-called Islamic State, and wanted to commit atrocities.

While in prison, Amman was also said to have revelled in his perceived notoriety as a young terrorist, and was said to have mixed with other high-profile offenders including the brother of Manchester Arena bomber Salman Abedi.

He was automatically released from Belmarsh jail on January 23, halfway through his 40-month sentence for obtaining and distributing material used for terrorist purposes, despite pleas to the prison governor to keep him in custody for longer after a police officer feared an attack would be ‘when, not if’.

The case resulted in a new law removing the automatic release of terror offenders on determinate sentences, meaning they now routinely serve two-thirds of their sentence before their custody status is decided by a Parole Board.

The inquest jury heard Amman was shot at six times, with between three and four bullets hitting him.

He suffered wounds in the neck and abdomen, and was pronounced dead at 3.24pm once the scene had been made safe.