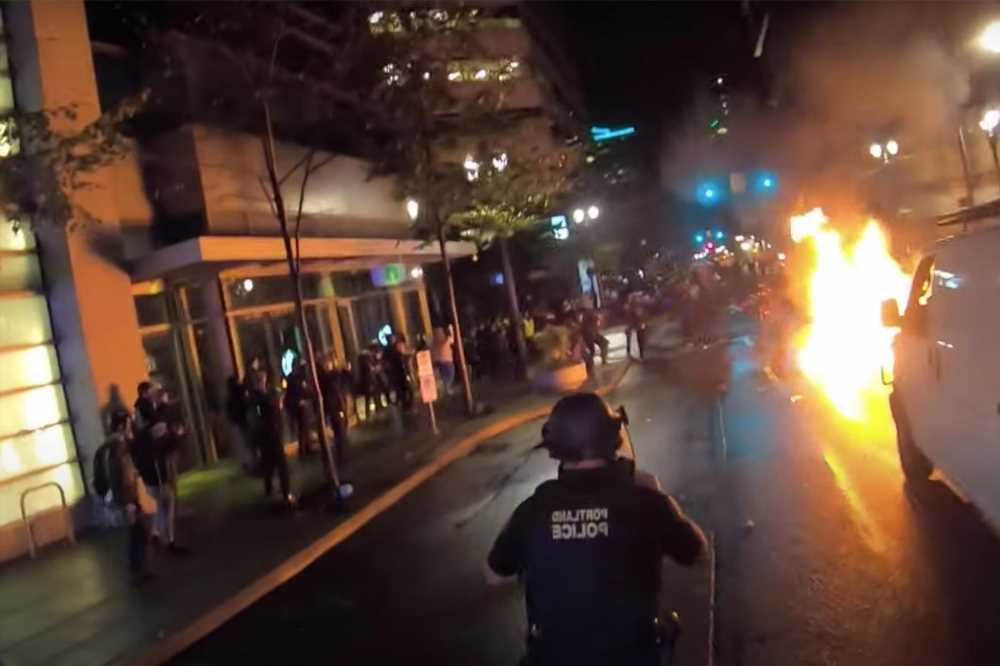 More than two dozen suspected Antifa rioters have been charged in Portland in the past two weeks, signaling an escalation by both local and federal prosecutors following a full year of riots in the besieged Oregon city.

The three were indicted over accusations they were part of a black-clad mob that broke most of the windows on the Multnomah County Democrats’ headquarters on Nov. 8, 2020. At the time, Antifa accounts on social media promoted the “direct action” to oppose the presidential election.

In a separate indictment, six other suspects were charged with felony crimes for their alleged roles in the Antifa Inauguration Day riot on Jan. 20. Holding a banner featuring a Kalashnikov rifle that read, “We don’t want Biden — We want revenge,” the group of Antifa marched to the Democratic Party of Oregon building where they started a fire on the street and smashed the building’s windows. Arrestees were found carrying knives, batons and crowbars.

Kai-Ave James Douvia, 23, a serial riot-arrestee, faces the same charges in addition to a second count of second-degree criminal mischief for allegedly smashing out windows of a coffee shop at another riot in November 2020.

Austin Nathaniel Nuchraska, 25, was indicted over the most serious charges. In addition to felony riot and criminal mischief charges, he is charged with four counts of unlawful possession of a destructive device at the Jan. 20 riot.

The district attorney’s office also announced charges against Sean Gabriel Lopez, a 26-year-old rapper known as “Noshu” who regularly attends protests and riots in Portland. He was arrested in the early hours of May 29 after a warrant was issued on charges of felony second-degree attempted assault, felony first-degree burglary, felony unlawful use of a weapon and two counts of felony first-degree criminal mischief.

Lopez’s bail was set at over $70,000, which was paid for by the Portland chapter of the National Lawyers Guild’s “Mass Defense Fund” program, according to a GoFundMe for him.

The charges are a 180-degree turn for left-wing District Attorney Mike Schmidt, who last year dropped over 90 percent of riot and protest-related cases. In an interview with Willamette Week shortly before he entered office at the height of rioting in August 2020, Schmidt said: “I think that when you look historically at this nation, it’s during these protests when we’ve gotten some of the changes that we are proudest of in our nation’s history. And sometimes it took some property damage. It took more than just peaceful protests to get the government’s attention. I’m very mindful of that.”

However, a spokesman for the district attorney tells The Post that Schmidt has “continuously condemned property damage and violence.”

In addition to the 10 charged by the district attorney last week, there have been more arrests.

Serial riot-arrestee Darren Ray Stephens, 36, was arrested on May 28 and charged with reckless burning and third-degree criminal mischief related to his alleged involvement in a violent unlawful assembly two days prior. However, the district attorney’s office declined to pursue these charges. Stephens is currently facing felony riot, theft and burglary charges related to a different riot incident last year.

Jarrod “Sofie” DeFerrari, 24, was arrested on May 29 for allegedly being armed with a loaded pistol and shotgun on a bus. She was found allegedly carrying additional ammo, restricted knives and brass knuckles. DeFerrari, from Sunrise, Fla., also has pending charges over her alleged involvement in smashing the windows of St. Andre Bessette Catholic Church and other properties at a post-election day antifa riot on Nov. 4. On social media, DeFerrari posts photos of herself posing in front of an Antifa flag with guns.

Tracy Lynn Molina, 48, was arrested on May 31 at an Antifa protest outside the local Immigration, Customs and Enforcement facility based on a hold request by U.S. Marshalls. She’s accused of assaulting a federal employee, disorderly conduct and failing to comply with a lawful order. She has two other pending federal cases against her. Molina was arrested at least eight times at Portland protests and riots in 2020. However, all but one of the cases were dropped by the district attorney.

Molina wasn’t the only one arrested in the last week based on federal criminal charges. The U.S. Attorney’s Office for the District of Oregon announced that Malik Fard Muhammad, 24, Rowan L. McManigal, 19, and Richard Timothy Hernandez, 56, were indicted for crimes allegedly committed at riots.

He’s accused of traveling from Indianapolis to violently riot at five separate protests in Portland. He allegedly threw Molotov cocktails at law enforcement, causing one officer’s leg to catch fire, and giving out baseball bats to rioters from September through October 2020. Muhammad was bailed out on May 26 by the Antifa-linked Portland Freedom Fund, who paid $212,500, or 10 percent of his state-ordered $2.1 million bail.

However, Muhammad was re-arrested on May 28 and taken into federal custody on separate federal charges of possession of unregistered destructive devices, engaging in civil disorder and obstructing law enforcement and using explosives to commit a federal felony. Court documents allege he had also traveled to Louisville, Ky. to receive firearms and tactical training.

McManigal is charged with conveying false information about possessing incendiary chemical agents on federal property. At an Antifa riot outside the ICE facility on Dec. 19, McManigal allegedly pulled wiring from the building’s card intercom and card reader, according to the criminal complaint. When he was arrested, he was allegedly found with a hoax explosive device.

Hernandez is charged with three counts of destruction of government property. Court documents say he threw a total of 74 rocks at the Mark O. Hatfield U.S. Courthouse and ICE facility on three separate riots. Damages from the broken windows totaled more than $160,000.