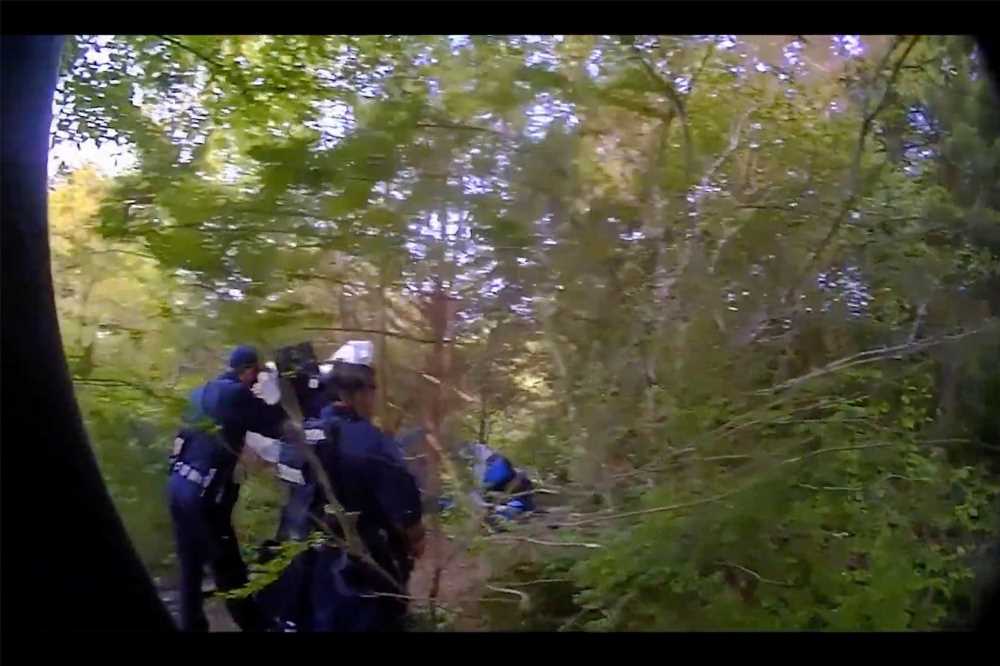 Newly released bodycam footage and 911 audio recordings capture the lead up to the police shooting death of an armed and mentally ill homeless man in Nashville Saturday.

Jacob Griffin, 23, was shot at a homeless encampment behind a local Goodwill store in the Tennessee city after police negotiators tried for nearly five hours to get him to drop his weapon and surrender, according to a videotaped briefing released Sunday by the Metro Nashville Police Department.

Don Aaron, a spokesman for the department, said events began to unfold around 2:30 p.m. when Griffin’s mother called 911 and told the dispatcher her son was armed and dangerous.

“He is schizophrenic, and for about the last hour has been texting me messages that he plans to kill me and other people,” Karen Griffin told the dispatcher. “He does have a gun. He has texted me pictures of a full magazine of bullets this morning. So he is armed.”

“I personally would consider him dangerous, though he has never actually been violent,” she said. “I really don’t want the police to kill him, but I don’t want him to kill anyone else either.”

She said her son used to work at the Goodwill store and was fired, and in the past “has threatened to enter the Goodwill with a weapon and kill anyone he can find.”

“Not today. He has not specifically threatened the Goodwill today, but he has talked about, quote, mass murder today in the texts he has sent me,” she said.

Police footage shows cops, including SWAT officers, trying to negotiate with Jacob Griffin, who is heard yelling at one point, “I am a hypnotist. Get off my property!”

“Jacob, put down your gun. Come halfway. You see that we’re still caring enough to get you out without being hurt,” one cop is heard telling him.

“If you really want us to leave, it’s all up to you,” the cop said. “You make all the choices.”

“Jacob you can’t be playing with a gun,” the officer said.

“Get off my property!” Griffin screams. “Now!”

“You just fired a shot. You just upped it up, Jacob,” another cop says. “You fired a weapon… You have to understand, you just upped the game.”

According to Aaron, police then decided, with darkness falling, to move in and try to distract Griffin by sending in a police canine.

Griffin then allegedly fired off another shot, prompting Grindstaff to open fire.

Aaron said Griffin was taken to Vanderbilt Unversity Hospital, where he died.

He said the state Bureau of Investigation is now probing the shooting.