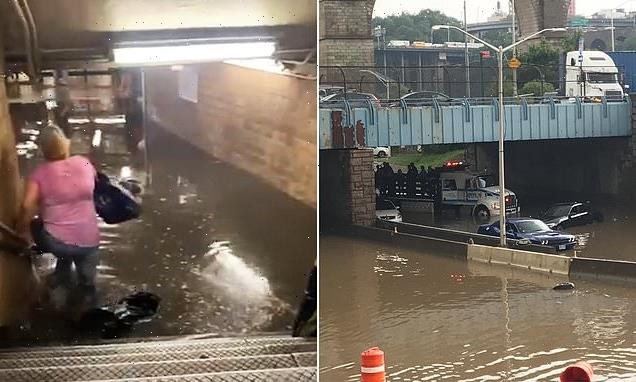 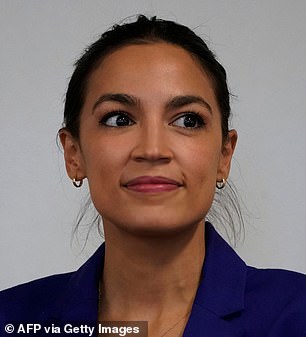 As shocking videos emerged showing New Yorkers wading through filthy waist-deep water to catch a train, Rep. Alexandria Ocasio-Cortez weighed in on Twitter to blame ‘fossil fuel execs’ and promote her Green New Deal as the solution to severe weather.

The thunderstorms that brought large hail to parts of New Jersey and spurred flash flooding in Manhattan are unrelated to Elsa, which hit the DC area on Thursday night as it heads towards NYC.

But the severe weather gave New Yorkers a taste of what could be in store for them, with Elsa predicted to arrive there by Friday afternoon with tropical-force winds and heavy rain. 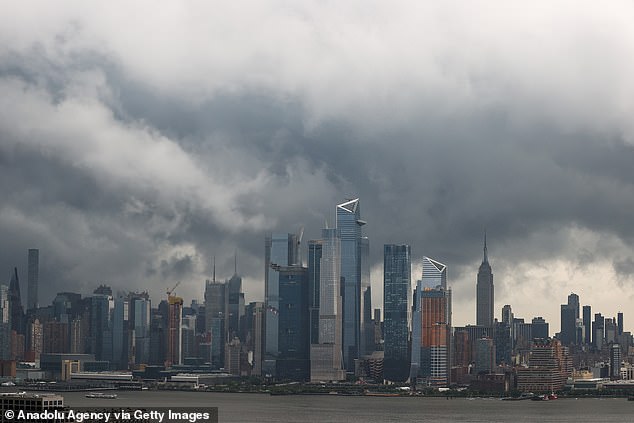 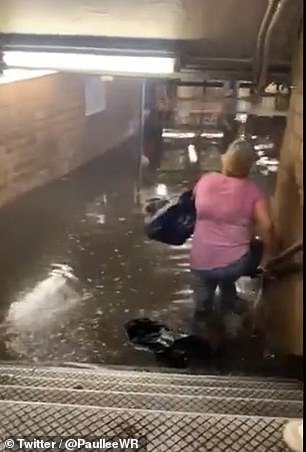 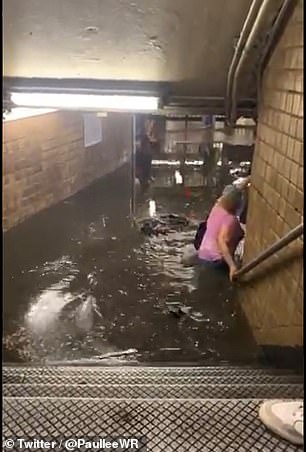 As flash flooding hits NYC, video showed a woman plunging into the squalid, trash-filled water to catch a train as it arrived in the station 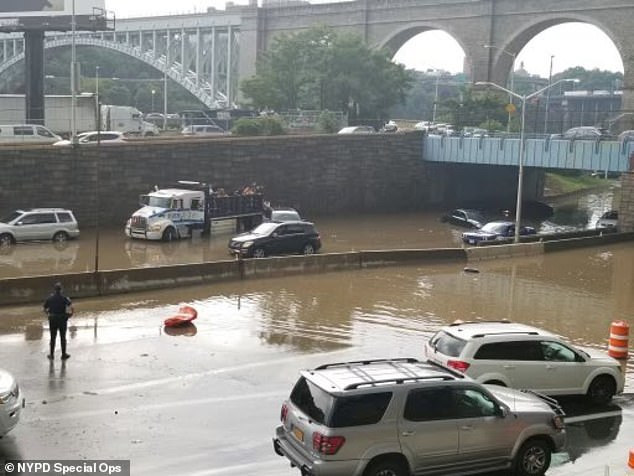 On the Major Deegan Expressway in the Bronx, the NYPD Strategic Response Group was deployed to rescue motorists whose vehicles stalled in deep water

On the Major Deegan Expressway in the Bronx, the NYPD Strategic Response Group was deployed to rescue motorists whose vehicles stalled in deep water.

The rescues took place near 179th street in the University Heights neighborhood.

In the Washington Heights neighborhood, the 1 Train station at 157th Street was seen submerged in deep water.

One shocking video circulating on social media showed a woman plunging into the squalid, trash-filled water to catch a train as it arrived in the station, holding shopping bags high above her head to keep them dry. 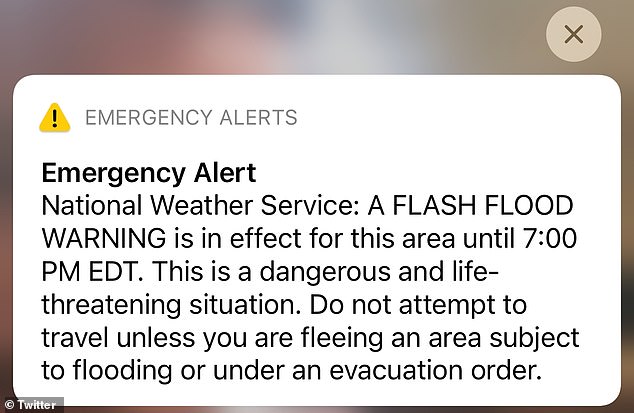 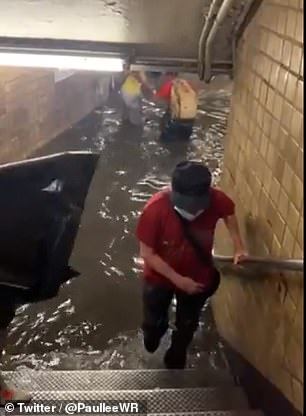 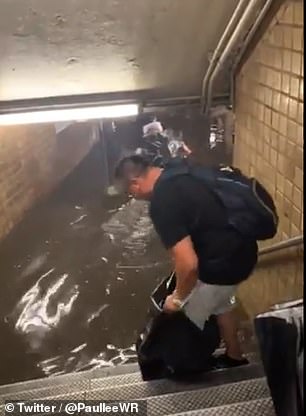 Some brave commuters waded through filthy water at 157th St, while others innovated and tried to hop through it in a trash bag, in the style of a potato-sack races 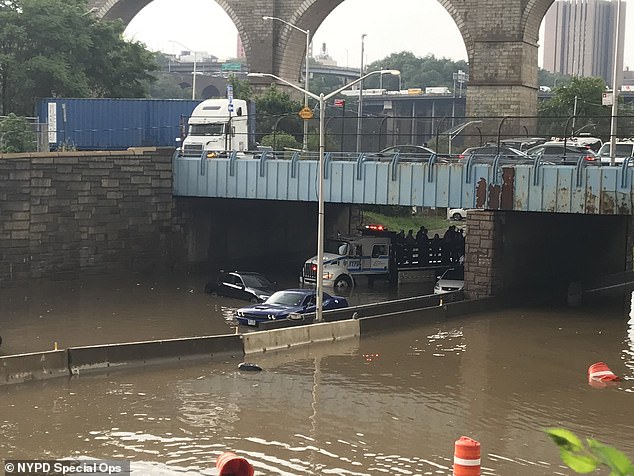 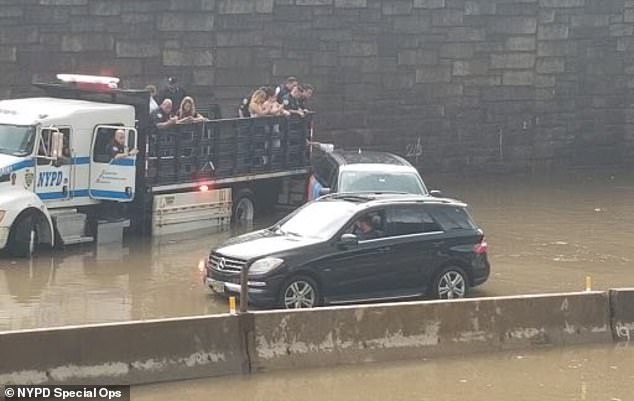 Other subway riders at the station were spotted stepping into trash bags and hopping through the water, in the style of a potato-sack race, to make their trains.

Ocasio-Cortez responded to the videos on Twitter, mocking her critics by writing in their voice: ‘The Green New Deal, which is a blueprint to create millions of good jobs rebuilding infrastructure to stem climate change & protect vulnerable communities, is unrealistic.’

‘Instead we will do the adult thing, which is take orders from fossil fuel execs &make you swim to work,’ she continued.

Flooding was also spotted in Penn Station, and the Metropolitan Transit Agency warned that A Train service was suspended between Inwood-207 Street and 181 Steet ‘because of an excessive amount of rainfall collecting at track level near Dyckman St.’

‘Crews are actively addressing flooding issues in our stations. We’ve hardened stations in coastal flooding zones, but when streets above flood, water will always flow downhill,’ the agency said in a statement.

‘Please be safe and do not enter flooded stations while our crews work to resolve this,’ the MTA added. 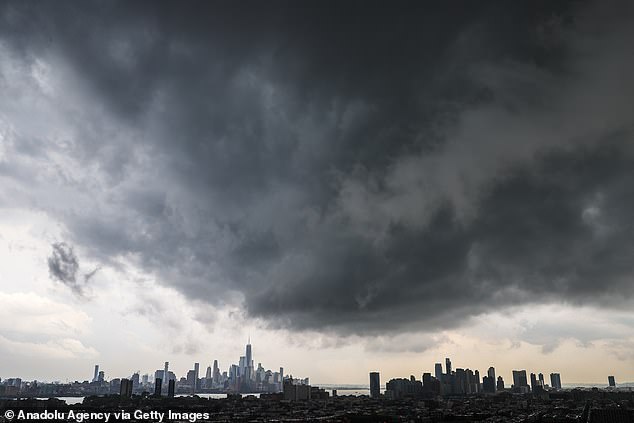 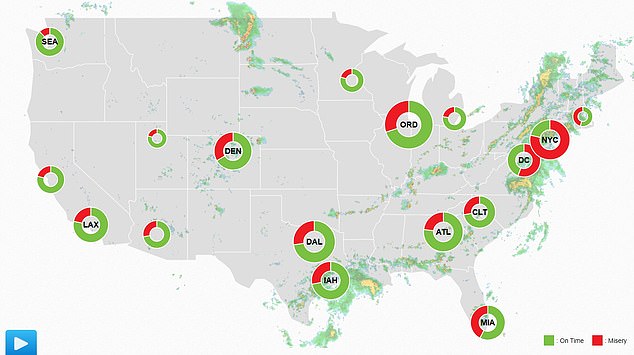 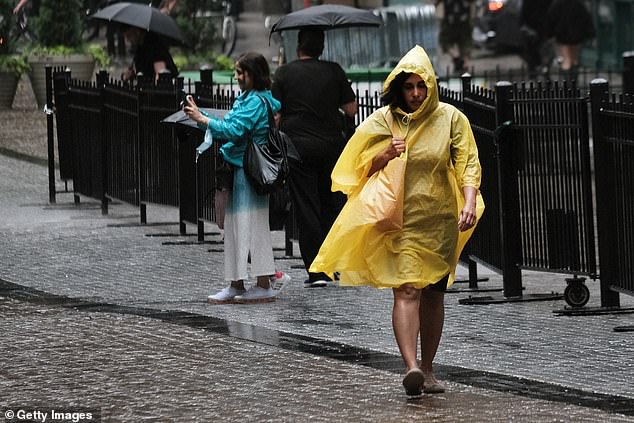 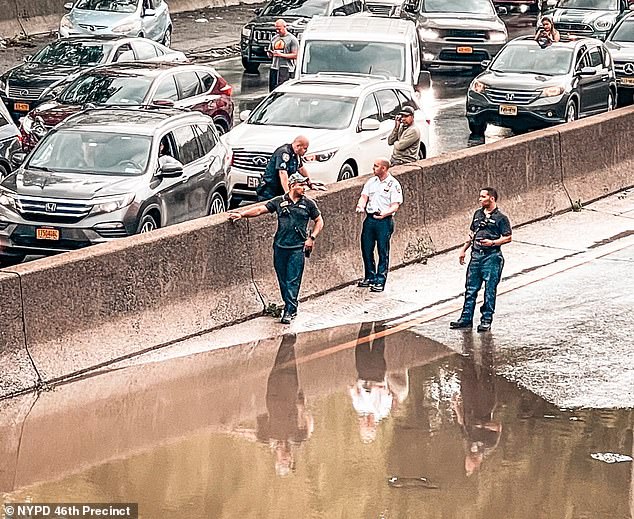 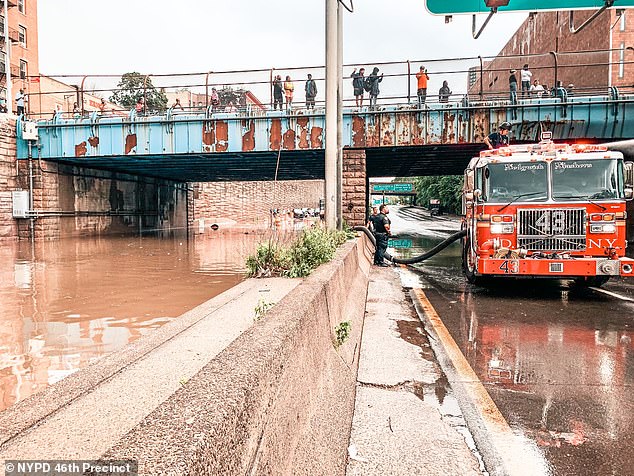 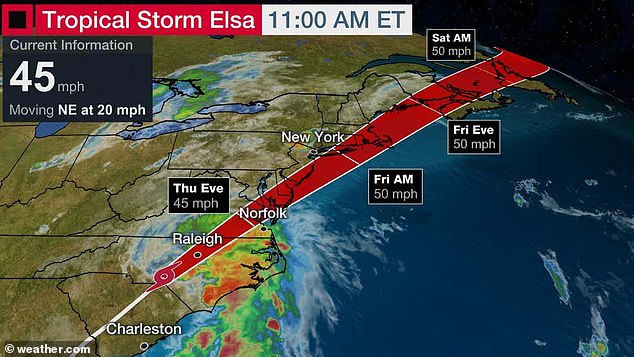 New York City’s major airports all experienced major delays as the storms rolled through, and called a ‘ground halt’ on incoming traffic until the weather passed.

State Senator Mike Gianaris warned in a tweet: ‘This is only going to get worse as Elsa passes through. Please be safe and don’t go out unless absolutely necessary.’

‘Tropical Storm Elsa, currently moving through eastern North Carolina this afternoon, will continue to bring tropical storm force winds and heavy rainfall to portions of the Mid-Atlantic tonight and parts of the Northeast into Friday,’ the National Weather Service said in a flash bulletin on Thursday.

‘From eastern North Carolina northward into New England, rainfall totals of 2 to 4 inches, with locally higher amounts, are possible and could lead to numerous instances of flash and urban flooding,’ the bulletin added.