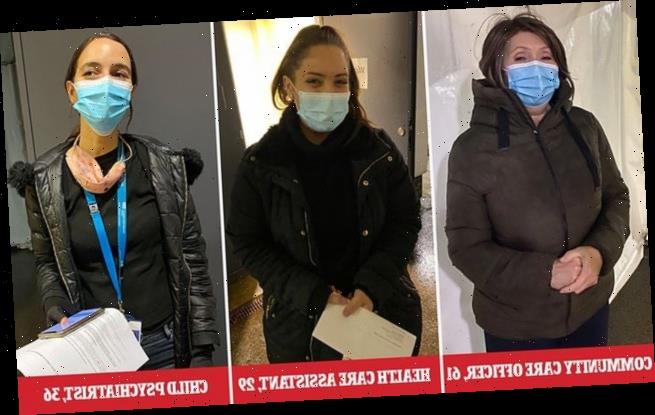 ‘It’s a life saver for me’: NHS staff and care-home workers rejoice as they are front of the queue for jabs as Britain’s first 24/7 vaccine hubs open their doors

Hospitals in Birmingham and Nottingham became the first to pilot round-the-clock jabs as the NHS rollout moves up a gear, with 24-hour hubs also opened in mosques and cinemas.

Relieved community care officer Helen Cooper, 61, beamed: ‘It’s a life saver for me and all those I work closely with. I was so keen to have it done at the first possible opportunity.’ 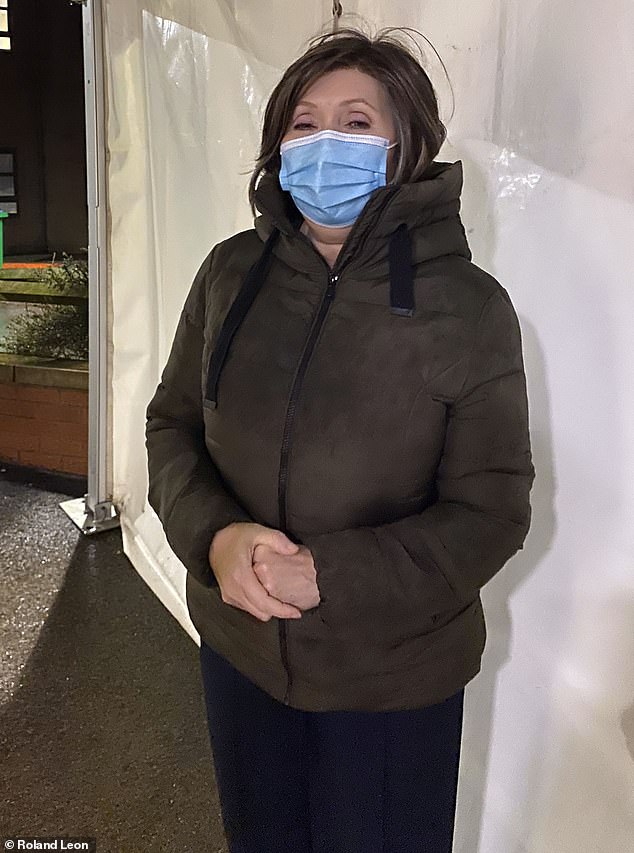 Community care officer Helen Cooper, 61, after having her vaccine at King’s Mill Hospital  in Mansfield 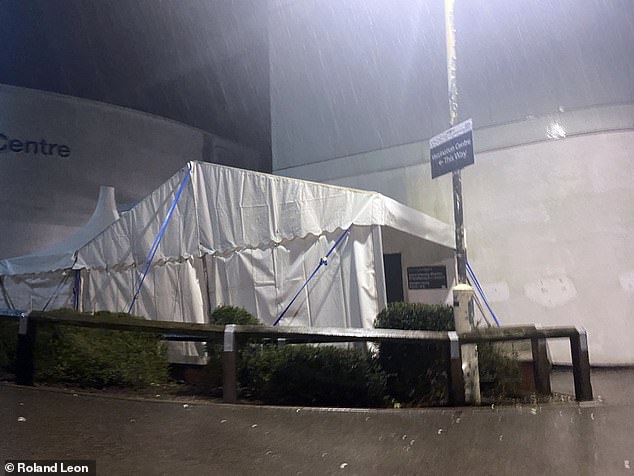 A marqueed entrance at the King’s Mill Hospital in Sutton-in-Ashfield, Nottinghamshire, where the hospital’s conference centre has been turned into vaccine centre

The mum-of-two was one of many taking advantage of the popular scheme at King’s Mill Hospital in Sutton-in-Ashfield, Nottinghamshire.

She joined the long queue waiting patiently in a marqueed entrance at the hospital’s conference centre turned into vaccine centre.

Mrs Cooper from Mansfield, Nottinghamshire, told the MailOnline: ‘My manager at Newark Social Services booked it for me yesterday.

‘It all happened so quickly, faster than I thought it would be. I’m so thankful and relieved that I’ve had my first jab and coming at night suited me because I’m busy working in the day time and doing a lot of home visits. It’s such a good idea.

‘It’s so important for key NHS workers and care workers to have the jab because the virus is mutating and we need to be protected.’

University Hospitals Birmingham and other Sherwood Forest Hospitals in Nottingham will be the first to pilot the 24/7 Covid jabs from today. 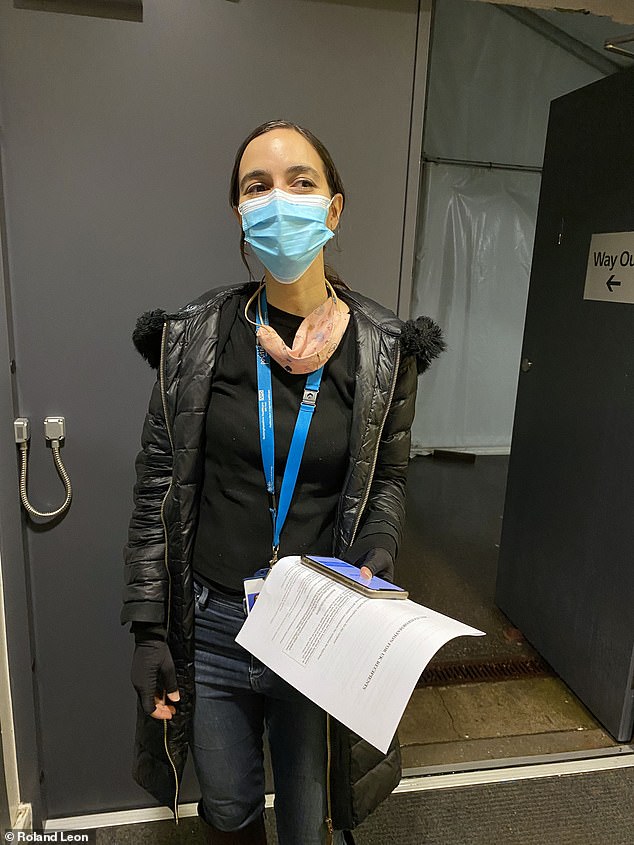 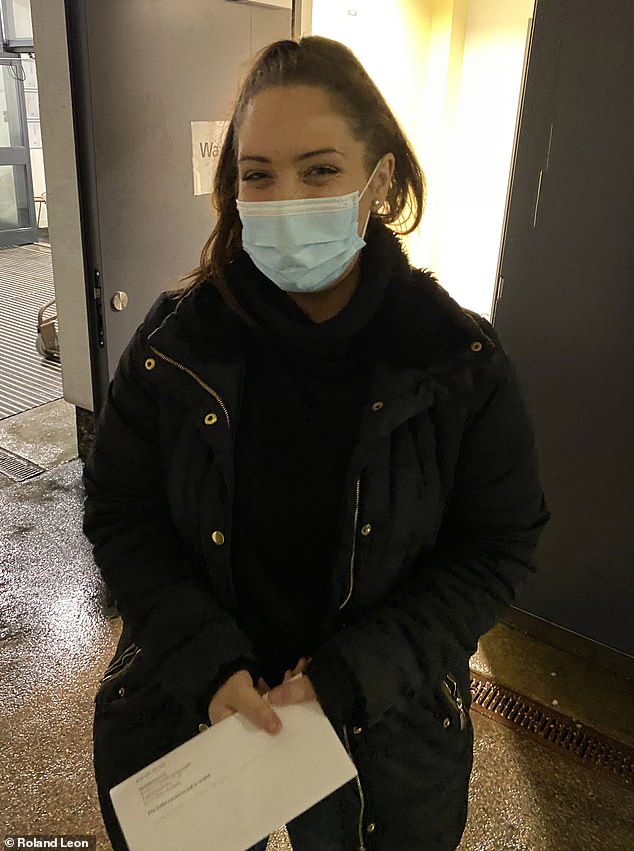 Emma Brealey, 29, a health care assistant in mental health, who received the jab at King’s Mill Hospital in Mansfield

Mr Johnson had previously promised to extend 7am-8pm hours at injection hubs to 24/7 clinics ‘as soon as we can’, with London expected to lead the way following its sluggish start to the rollout.

The vaccines will be offered to existing high-priority groups, including those aged over 80 and frontline health and care workers.

If successful, a network of clinics will spread across the country. A mosque in Birmingham and the Odeon cinema in Aylesbury, Buckinghamshire, are among dozens of other sites that have started to offer the service.

A total of 343,163 people were given a first dose of the vaccine on Tuesday after a three-day slump in jab figures when the daily total slipped to just over 200,000. There had been concerns the programme was stalling, with Boris Johnson and Home Secretary Priti Patel blaming ‘supply issues’. 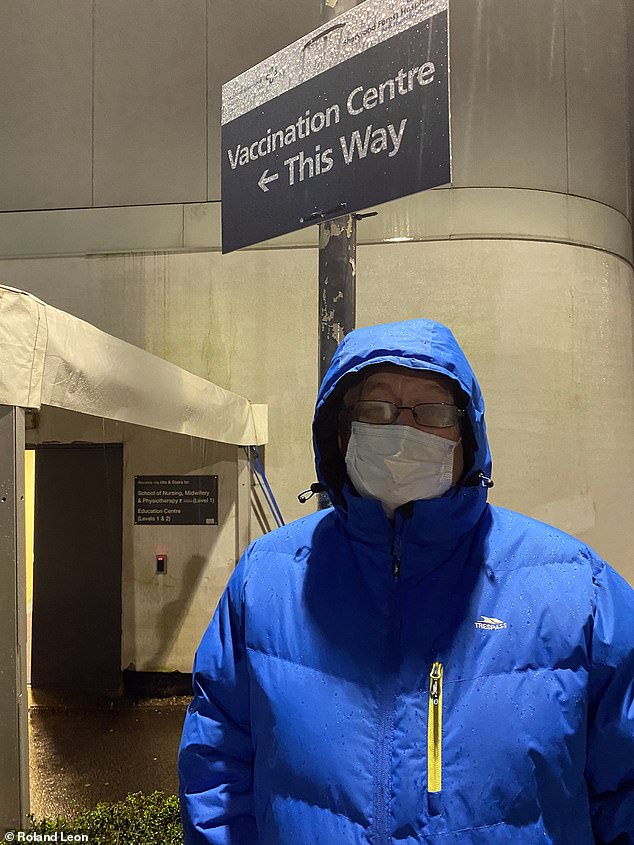 NHS health care assistant Stuart Wigman, 65, booked online at 5pm for his jab and was stunned to be given a slot at 9.40pm 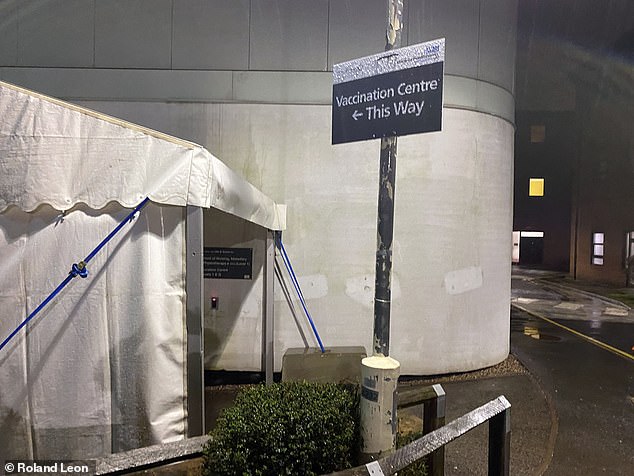 Yesterday the Prime Minister insisted the UK was on course to meet the target of vaccinating the 15 million most vulnerable people by mid-February. He told MPs: ‘We are on track to deliver our pledge – though it is very hard because of constraints on supply.’

Child psychiatrist Nadia Valiallah, 36, said after her 10pm jabs slot: ‘I feel good, really happy! I’ve been desperately waiting this to become available for me. I wanted it done as soon as possible and I’m so glad to see this centre is busy tonight and being well used. It’s a great idea to open it round the clock.’

She added: ‘I received an email from my healthcare trust earlier today saying I could have the vaccination. There was a booking system and I got a slot very quickly. I was in and out within half an hour. Very impressive.’ 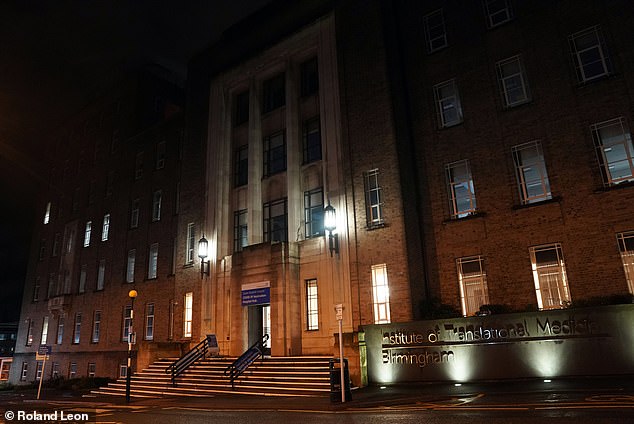 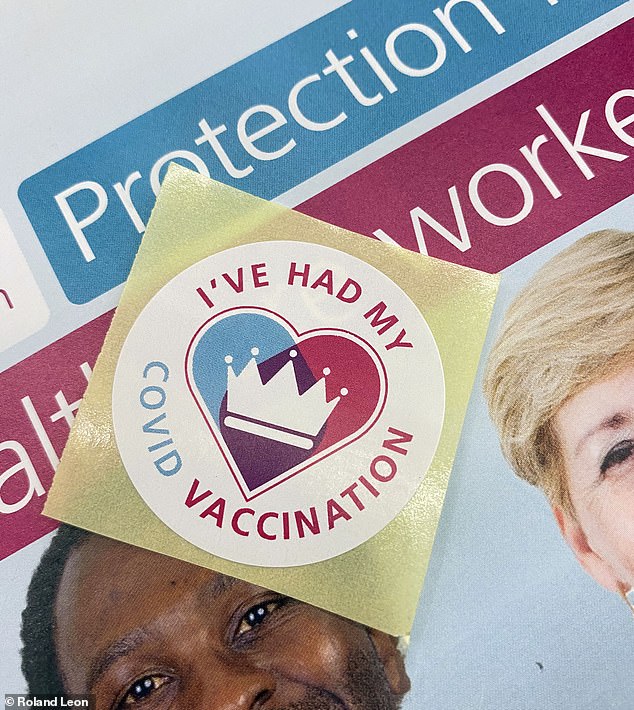 A sticker reading ‘I’ve had my Covid vaccination’, given to frontline workers after receiving jab

She told how her surgeon husband Khaleel Fareed, 42, who works at a Derby hospital had already had both his jabs on previous occasions, saying: ‘He’s lucky but now I’m half way there.’

The mum-of-three from Nottingham, who works at the city’s Queen’s Medical Centre, said: ‘My uncle died from Covid aged 76. My dad is 66 and my mum 60 and they are both desperate to be inoculated but are not yet at priority age. Like many others they’ll have to wait.’

A super strain of coronavirus behind the surge in infections which led to the national lockdown should not cause problems for the Pfizer vaccine, a study suggests.

The mutant variant, which was first found in Kent, raised fears it could impede vaccination efforts after experts warned the jabs may not work as well against it.

But the first vaccine rolled out in the UK, developed by German firm BioNTech and manufactured by the pharmaceutical company Pfizer, appears to be effective.

However, it comes as a separate study suggested another variant, which was first found in South Africa, can escape the antibodies produced after vaccination.

Researchers from BioNtech collected blood samples from 16 vaccinated people and found their antibodies were able to block a lab-created virus which was similar to the British strain.

The scientists conclude that this means it is ‘very unlikely’ this strain could escape the vaccine.

The second vaccine to be approved in the UK, from Oxford University, is also being tested against new variants of the virus.

Dr Simon Clarke, an associate professor in cellular microbiology at the University of Reading, said: ‘The so-called Kent variant of the Covid-19 coronavirus is no less susceptible to neutralisation by antibodies produced in response to Pfizer-BioNTech’s vaccine.’

But it comes as researchers from the National Institute of Communicable Diseases in South Africa found a mutation from its country’s strain can escape the antibodies of people who have recovered from Covid-19. This suggests it may also escape antibodies produced following vaccination.

Plasma was taken from the blood of 44 people who had recovered from Covid-19. In almost half of cases there was no detectable activity by the antibodies to block the South African strain of the virus.

They found one mutation in the spike protein on the virus managed ‘complete escape’ from laboratory-made antibodies that mimic the immune system’s ability to fight off viruses.

This raises concerns that people who have recovered from other strains of the virus may not have immunity against the South African one. The results from both studies have not yet been published or reviewed.

NHS health care assistant Stuart Wigman, 65, booked online at 5pm for his jab and was stunned to be given a slot at 9.40pm.

He said: ‘I was in and out within 25 minutes and 15 minutes was sitting down after the jab. Coming in the evening was best for me because I’m working during the day. There’s been a steady stream of people here and I’m surprised it happened very quickly. Job done. I’m very pleased.

‘Hopefully this is the start of getting back to some normality. My wife is coming for hers next week.’

The dad-of-two from Mansfield said: ‘This new all night centre is an superb idea and hope it’s here to stay.’

Emma Brealey, 29, a health care assistant in mental health, said: ‘It was my day off today and I got everything done and had to then come tonight for my jab. I only booked it last night and there were lots of free slots.

‘I’ve had friends with Covid who have been really poorly but thankfully I’ve not lost anyone to the disease. I’m glad I’ve had my first dose now and it gives me peace of mind to know I’m protected and think people everywhere should get the job as soon as they possibly can, particularly front line staff.

‘My partner’s an engineer and will have to wait for his but at least I have protected for me and my family and the people I work closely with.’

Another late night vaccine-receiver was support worker Emily Patterson, 24, who works for a private care company in Mansfield.

She said: ‘I’m happy now! My manager had sent me the link and I booked straight away and knowing I’ve had it protects not just me but the people I work with.

Brazilian care worker Patricia Burton said: ‘I couldn’t get here quick enough and the horrible weather didn’t put me off.

‘I booked online and was surprised how quickly I got offered slot and how quick it was to have it done. It’s a good idea having the opportunity to come at night because many of us are busy working in the day or looking after our kids.’

The mum of daughters aged eight and 11 said the procedure was ‘very organised and well managed’ and ‘an absolute must.’

Tonight the first all night centres in Nottinghamshire and at Birmingham’s Queen Elizabeth Hospital rolled out after the nation recorded its deadliest day of the pandemic for the second day in a row with 1,820 more victims and with the UK’s overall death toll creeping closer to the grim 100,000 milestone.

A spokeswoman for University Hospitals Birmingham NHS Foundation Trust said: ‘We are looking at further options to provide all health and social care staff across Birmingham and Solihull the opportunity to be vaccinated at a time that suits them. From tonight we will be opening up a number of vaccination appointment slots specifically for our night staff between 6pm and 8am. ‘

Whilst a 24/7 hub was up and running at Birmingham’s Queen Elizabeth Hospital on Wednesday night, it appeared a smaller number of people had turned up at the clinic with only a trickle of people entering the building as heavy rain poured.

High street pharmacies, including a Boots and a Superdrug, began delivering the jabs last week and another 65 pharmacy sites are joining the programme by early next week. Vaccinations are now available from more than 1,000 GP-led services, over 200 hospitals and a growing network of large-scale NHS vaccination centres.

But there have been widespread complaints of a postcode lottery as some parts of the UK race ahead of others in vaccinating over-80s and care home residents.

Ministers revealed earlier this week that over-70s would start receiving jabs in areas that have already vaccinated other priority groups. Issues surrounding the supply of the Pfizer and Oxford vaccines are shrouded in secrecy, with officials blaming ‘national security’ for lack of transparency. 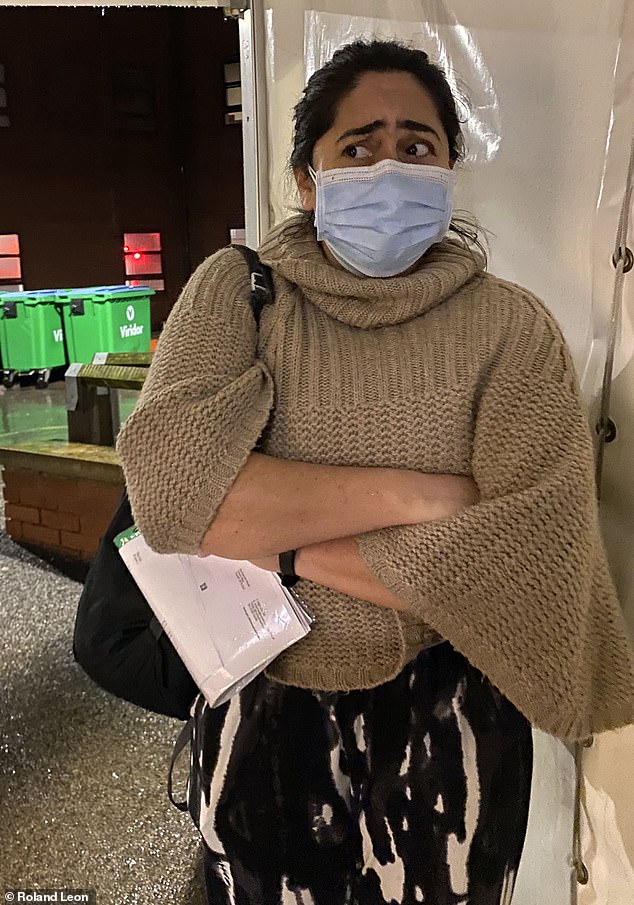 Dr Richard Vautrey, of the British Medical Association, said the past few weeks had seen an enormous vaccine effort by GPs and other health workers. He added: ‘Unfortunately, we are hearing of supply issues which are impacting the speed of the rollout. Despite having the staff and resources available, some GP-led sites are not able to vaccinate patients at the rate at which they could if they had continued access to the vaccine.

‘As well as accelerating the delivery of supplies to ready and willing sites across the country, the Government needs to be honest – both with the public and practices – about what supplies are available.’

Health Secretary Matt Hancock praised the vaccine rollout. He insisted: ‘Vaccines are the way out of the pandemic and this historic rollout will cover every corner of the country. Community pharmacists have been phenomenal and will have a pivotal role to play in the continued expansion of the programme. Over four million people have already received their jab. From hospitals to pharmacies, sports clubs to places of worship, we’re making sure the vaccine is as accessible as possible.’

He claimed every adult in the UK will have been offered a vaccine by autumn.