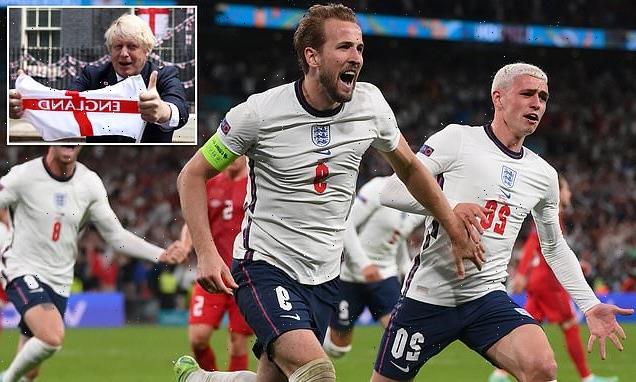 No10 today hinted at a Bank Holiday to celebrate if England win their titanic Euros final – with Keir Starmer also backing the plan.

The PM’s spokesman refused to jinx the showdown with Italy by announcing how the country would celebrate, but made clear the issue is being considered. The extra day off could happen later in July or August.

Meanwhile, Boris Johnson has been riding the wave of football fever engulfing the nation by decking out Downing Street in the flag of St George.

Economists expect a spending boom if England can go all the way in a major tournament for the first time since 1966, with Tories hoping they can benefit from a political bounce due to the euphoria.

England mad bosses across the country have promised staff ‘Hangover Monday’ off whatever the result for Gareth Southgate’s team. 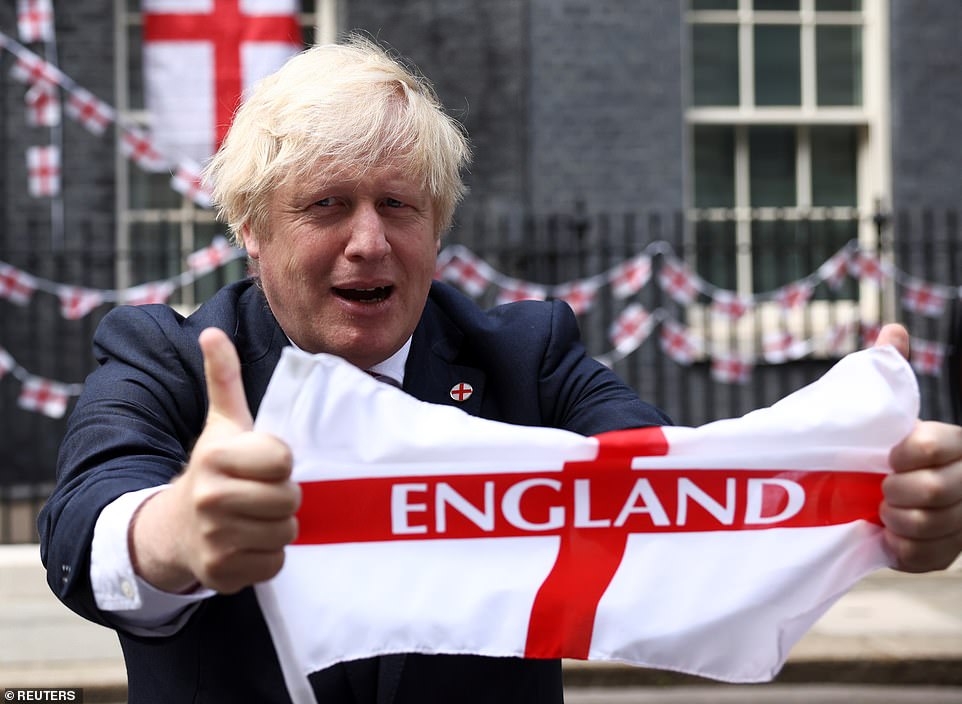 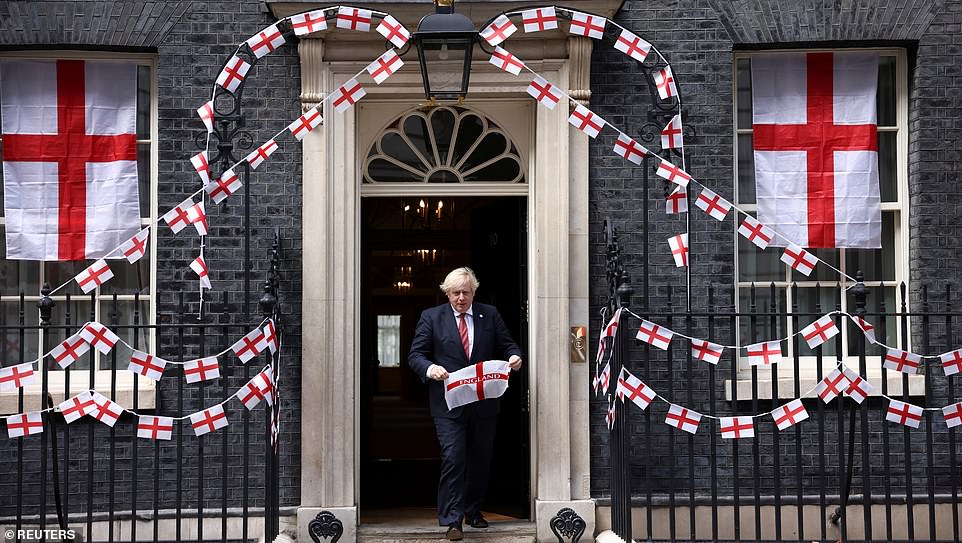 Economists expect a spending boom if England can go all the way in a major tournament for the first time since 1966, with Tories hoping they can benefit from a political bounce due to the euphoria 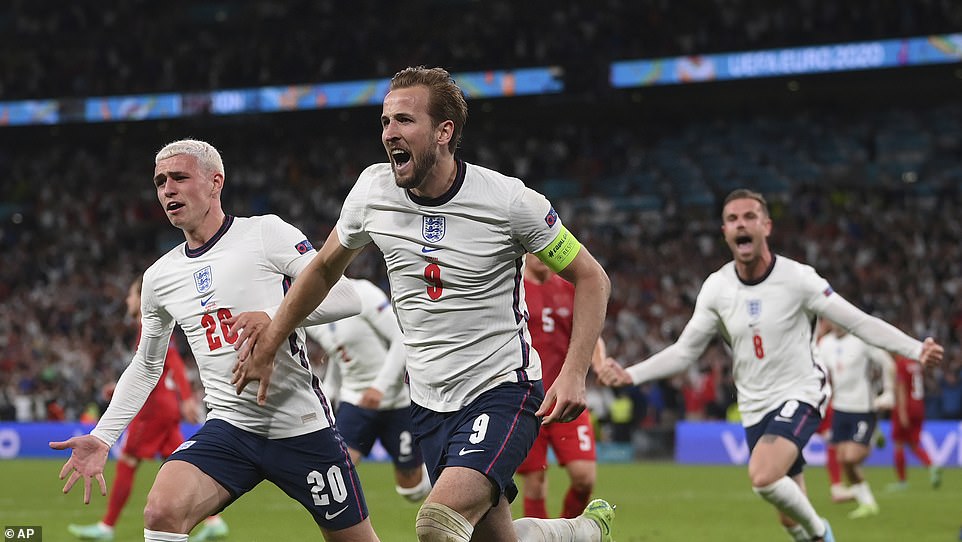 Growing numbers of schools including in London, Leeds, Lancashire, North Yorkshire, County Durham, West Midlands, Lincolnshire, Derbyshire, Hertfordshire, Herefordshire, and Berkshire have said children don’t have to arrive until 10.30am so they can stay up late to watch Sunday’s ‘cultural event’.

Rossmere Primary School in Hartlepool has told parents and carers the clash against history is ‘a learning opportunity’ for the children, saying: ‘We would rather have children rested and in school ready to learn rather than absent all day or grumpy’.

The headteacher of Salcombe Primary School, Andy Pugsley, has told parents in the wealthy coastal town: School will start at 8:40am but children arriving up to 10:30 won’t be marked as late, and they won’t miss any lessons.’

A petition calling for a Bank Holiday on Monday should England win has passed 300,000 signatures.

Lee Jones set up a petition on the Parliament website on Thursday, saying it would be ‘beneficial and sensible’ to give the country the day off. Sir Keir backed the campaign today.

The Prime Minister believes it would be ‘tempting fate’ to announce one in advance of the most significant football match since 1966. While any victory parade would be delayed until after July 19.

But hinting he is edging towards the move if England win, a Downing Street spokesman said: ‘We don’t want to pre-empt the result and tempt fate, but we would obviously set out any future plans if necessary in due course.’

Many businesses are planning to give staff time off on the day – or let them come in late – after millions turned up to work hungover and tired on Thursday – or didn’t come in at all having stayed in bed.

Chief executive of digital marketing firm Verb Brands Chris Donnelly, 30, told his 65 staff not to come in after the historic match against Italy on Sunday night, regardless of the result.

Chris told MailOnline: ‘This could be a once in a lifetime opportunity when it comes to England and I want everyone to enjoy it. Besides, this is about staff welfare. With all the stress of the game there will be enough to worry without the thought of work the next day too.’

Mr Donnelly has already been declared ‘Britain’s Best Boss’ earlier this year when he gave everyone the day off on full pay to go to he pub as bars and shops reopened in April.

His England LinkedIn post generated more than 1.000 likes as he called for government to consider an extra Bank Holiday if England win. Chris’s post read: ‘Whether you like football or not, another day to spend with friends or family after the year we have just had is essential. I think other companies should follow suit and wouldn’t it be amazing if the government did too. I hope the team enjoy their time off’.

Unions are urging employers to find ways to let millions working on Sunday night to tune in.

Frances O’Grady, general secretary of the TUC, said: ‘Bosses should talk to their staff about flexible working arrangements ahead of Monday morning – perhaps allowing them to start later and claim back their time afterwards.

‘And bosses should show flexibility too towards the 2.2 million workers who work on a Sunday – many of them key workers.

‘Many of them will want to watch the match, and they should be able to, either at work or by finishing early and making up the time.’

Mr Johnson is actively considering holding a national day of celebration if Gareth Southgate’s team beat Italy to secure a first major championship triumph since the 1966 World Cup. However, he dismissed the idea of making Monday a snap bank holiday holiday. 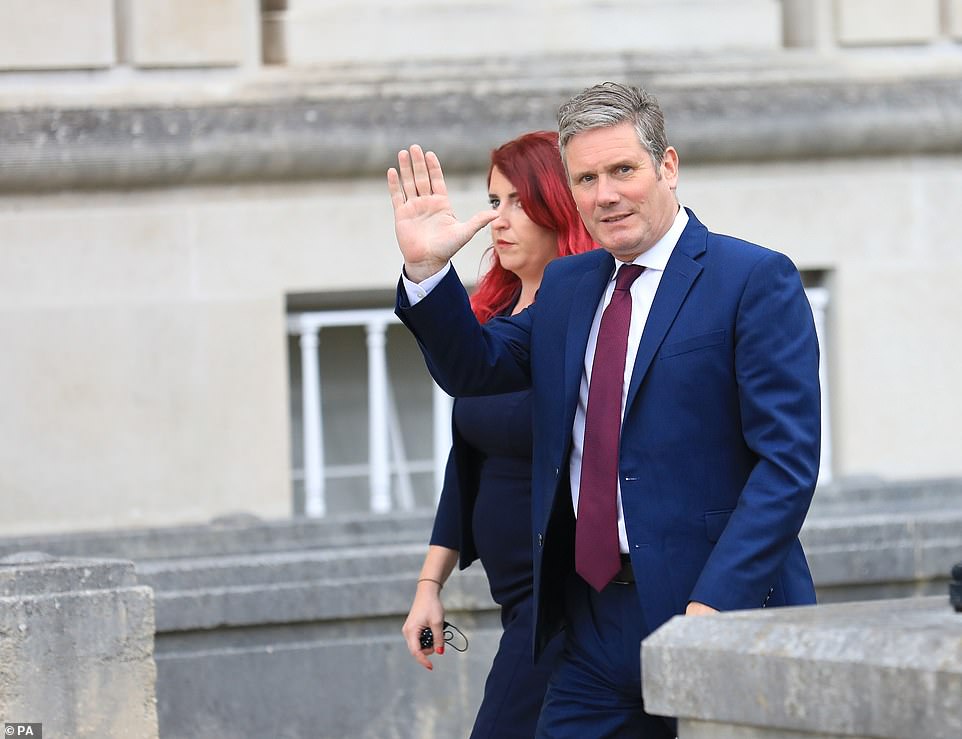 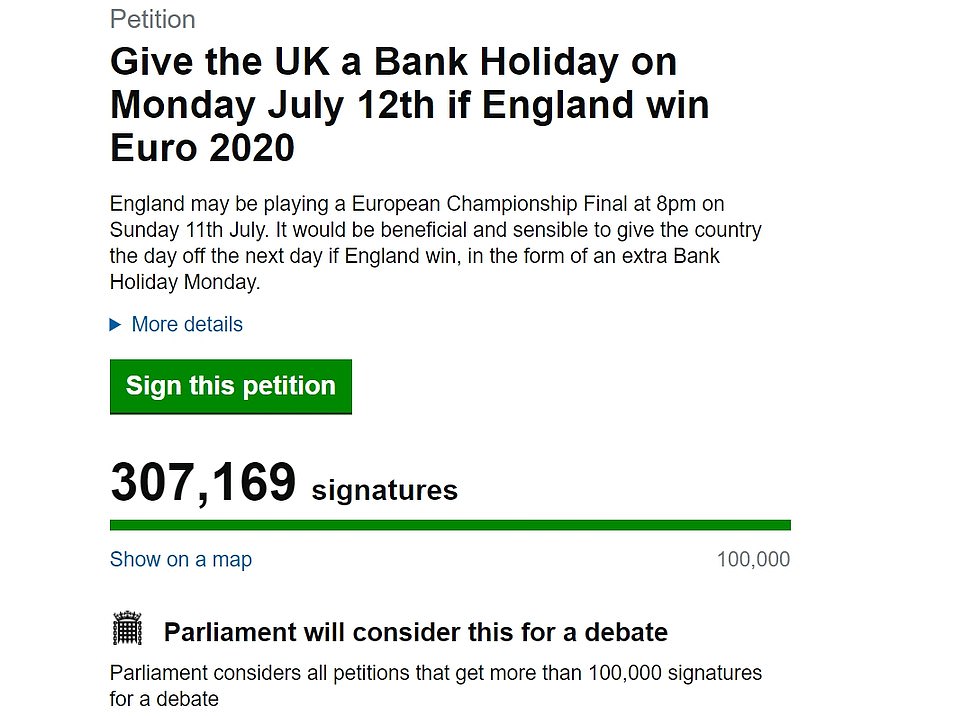 Three Lions fans have signed a petition calling for a Bank Holiday on Monday if England win, but it looks impossible to organise in time

There are also fears that an England win would spark celebrations that cause a ‘Hangover Monday’ meaning many workers take the day off anyway. It’s understood that Mr Johnson will ‘consider the options’ for marking a historic win, and that could include a bank holiday.

Downing Street did, though, urge bosses to allow workers to have a lie in and late start on Monday should England emerge victorious, amid the prospect of the nation suffering one big hangover

Asked whether employers should give staff the day off on Monday, the Prime Minister’s official spokesman said: ‘We would want businesses who feel able to consider it if they can but we recognise it will vary depending on the business and company.’

Downing Street also said it would set out plans for any celebrations such as a victory parade, though sources indicated this was unlikely before the autumn.

The spokesman added: ‘I don’t want to pre-empt the outcome of Sunday’s match. Clearly we want England to go all the way and win the final and then we will set out our plans in due course. We will hopefully, when England go on to win, then go on to set out our plans.’

The Prime Minister has ruled out increasing the number of fans allowed to attend Sunday’s match at 90,000-seat Wembley Stadium above 60,000, saying: ‘There are no plans to extend the capacity.’