Optometrists are reporting a spike in glasses sales and visits from people whose eyesight has deteriorated following months of working from home and homeschooling.

The situation has prompted one Melbourne optometrist, who caters exclusively to children, to warn of “a new pandemic” of short-sightedness. 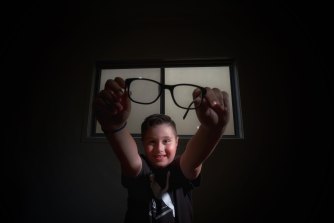 “If you were forced to sit in front of a screen for homeschooling or as an adult working in front of the computer with no breaks … whatever was brewing in the background was brought to the fore,” she said.

“The human eye is not designed to be sitting in front of a screen for eight hours a day… we were put in a very artificial, unusual situation so our visual system got stressed.”

“The human eye is not designed to be sitting in front of a screen for eight hours a day.”

Nicky Kiparissis, an optometrist at Kiddies Eye Care in Yarraville and Geelong, said her practice had recently experienced a 30 per cent spike in visits from children with eye issues, with many requiring glasses. She said these problems would have never manifested if it weren’t for long periods of homeschooling.

“It is the new pandemic. One in two children will be shortsighted by the year 2050,” she said, referring to research by the World Health Organisation.

She said these problems needed to be treated early on with specialist glasses, as myopia was linked to an increased risk of retinal detachment, glaucoma, macular degeneration and cataracts. 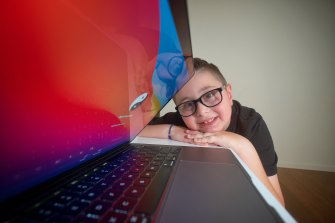 One of her recent clients, eight-year-old Michael Angelevski, had been complaining of headaches, rubbing his eyes following screen time and skipping lines while reading.

He was diagnosed with myopia, or short-sightedness, prescribed a pair of glasses and told his eyes were similar to those of a 15-year-old. While Michael can see close-up objects clearly, objects in the distance are blurry.

His mother, Danni Angelevski, said her son had never experienced issues with his eyes until he began homeschooling last year.

“He went from spending 20 minutes on his iPad in a classroom to all of this time in front of a screen at home,” she said.

“There wasn’t too much opportunity to get out and about and run around and have a break.”

Michael now wears a pair of Star Wars-themed glasses and it’s hoped his new eyewear and a return to face-to-face learning stops his myopia from progressing. “Things look clearer,” he said. “My eyes used to feel itchy. Now they feel normal.”

Michael is not alone. A recent study of more than 120,000 school-aged children in China found that myopia appeared to be around three times higher in 2020 than in other years for children aged 6 years, two times higher for children aged 7 years, and 1.4 times higher among 8-year-olds. Researchers suggested this was due to decreased time spent outdoors and increased screen time during periods of homeschooling.

Large eyewear chains are also reporting an increase in glasses sales and appointments.

Glasses sales at Specsavers are up 11 per cent this year compared to 2019, according to Dr Joe Paul, Specsaver’s head of professional services.

“With greater use of computers and screens, more people are reporting eye strain, sore eyes and reading-associated issues,” he said.

Bailey Nelson has recently experienced a 15 per cent increase in demand for optometry services compared to the same period last year, when Victorians were also emerging from lockdowns.

Sam Lauriola, an optometrist from I-Care Optometrists in Collingwood said while there was pent-up demand for eye optometry services following the end of lockdown, a new cohort of people with eye issues were also keeping eye specialists busy.

His optometrist has recently seen a 20 per cent increase in appointments from people suffering eye strain from excessive computer use. Glasses, eye drops, and advice on how to improve their computer set up are the most common remedies.

“Our eyes were designed more for distance viewing than for near viewing,” he explained.

“When we are spending time in front of a screen or tablets or phones, our eyes have to work a little bit harder to see up close. If the visual system is not working efficiently, spending time at closer distances will cause problems. It may present itself as gritty, dry eyes, reading may become difficult.”

Our Breaking News Alert will notify you of significant breaking news when it happens. Get it here.