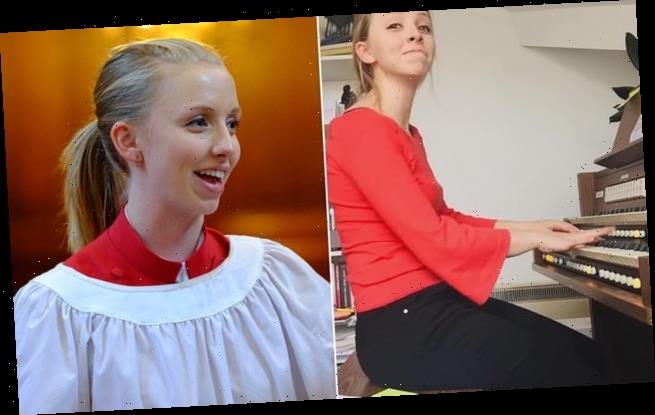 Just play along! Organist stuck on hold for 70 MINUTES has a hilarious reaction to relentless Mozart background music

An organist has shared her humorous reaction to being put on hold to the same movement of a Mozart Symphony for over an hour.

Anna Lapwood, 25, from Royston, Hertfordshire, who is director of music at Pembroke College, Cambridge University, found herself listening to the same segment of the piece whilst stuck on hold to E.On Energy for 70 minutes.

The conductor, who presented the BBC’s Young Musician 2020, took to her electronic pipe organ at home to play along instead of becoming increasingly frustrated by the maddening music.

A video posted to Ms Lapwood’s Twitter shows the third time the musician had ever played the piece – usually played by a full orchestra – when she printed out the sheet music after 45 minutes of being on hold.

The organist captioned the video: ‘When you’re on hold for 70 MINUTES and the same Mozart is on loop for that entire time there is only one thing for it.

Ms Lapwood told the MailOnline: ‘I was going absolutely mad, because it was only a little bit of the piece and didn’t get to the good bit. I was just trying to sort out my energy bill. 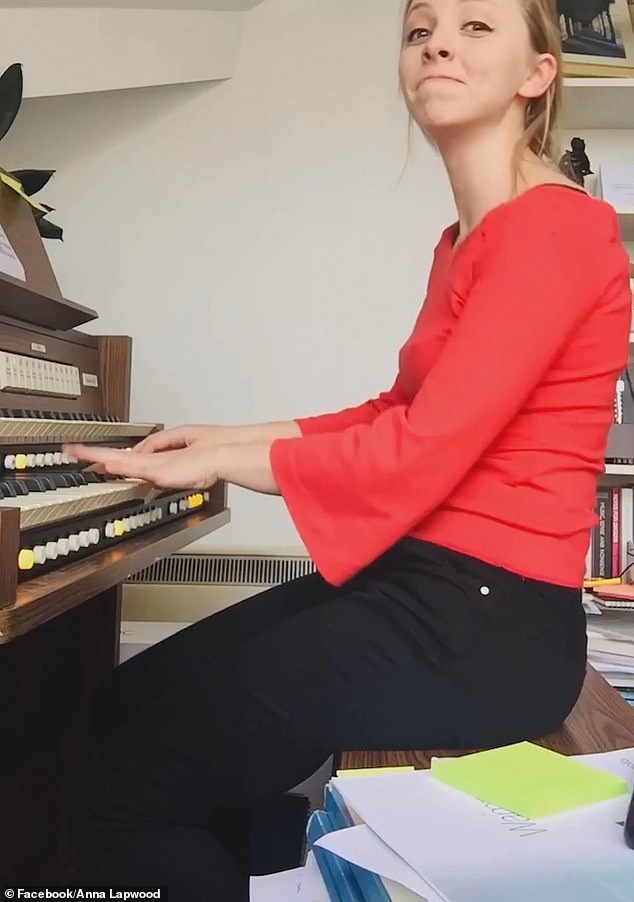 Anna Lapwood, 25, from Royston, Hertfordshire, who is director of music at Pembroke College, Cambridge, took to her organ whilst on hold to E.On Energy 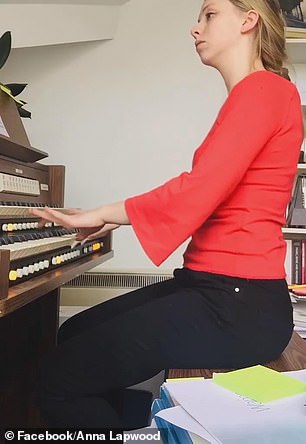 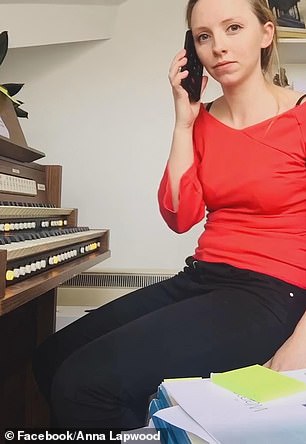 A video posted to Ms Lapwood’s social media shows the third time the musician had ever played the piece. After 70 minutes of waiting the musician finally got through (right)

‘About 45 minutes in I thought right i’m just going to go and play along and I think that was my third play through and I thought this is actually quite funny I will film it. But of course that was the moment they picked up the phone!’

She added: ‘I was almost annoyed when they finally picked up the phone because I was quite enjoying myself’.

Ms Lapwood tweeted live developments of the call to E.On Energy, writing: ‘I have been on hold with my energy provider for 30 minutes and they are playing the first movement of Mozart 40 in an endless loop.

The conductor was less than pleased to find that it wasn’t even the whole piece being repeated, she wrote: ‘Worse than that, it’s just the exposition so we don’t even get any development or recap. AAAAAAAAAAA. Is this what hell feels like?’ 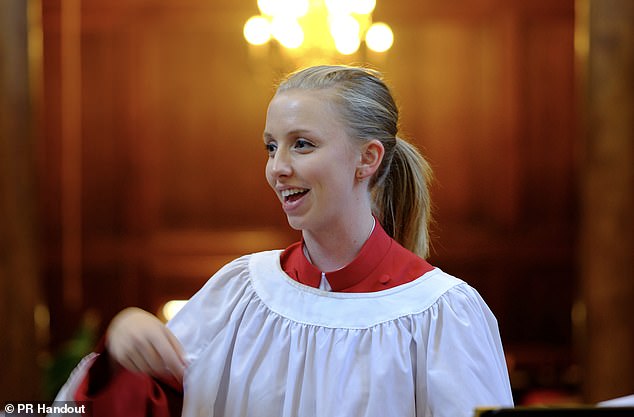 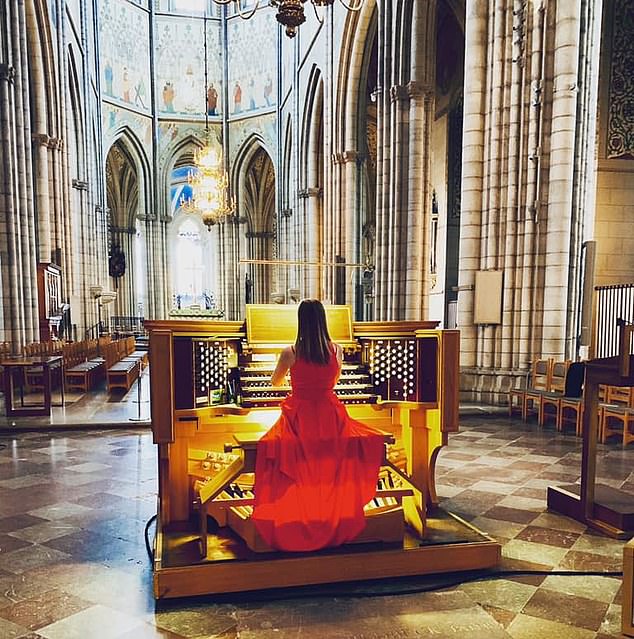 Ms Lapwood is also in demand as a conductor, directing the BBC Singers as part of the BBC Proms Inspire programme in 2019

Rather appropriately the helpline, which Ms Lapwood is playing along to on speakerphone, eventually picks up just after the piece builds to a dramatic crescendo.

Ms Lapwood decided to share the video on her Twitter to raise the spirits of those in her ‘niche area of the music world’, adding that times had ‘been tough’ for most musicians as ‘self-employed work has gone out the window’.

She said that for many ‘music is the biggest way we’ve learned to stay positive’.

In a message to other musicians Ms Lapwood said: ‘It’s ok to be finding it difficult, I would also say it’s ok to not have the energy, mental or physical, to make music at the moment. 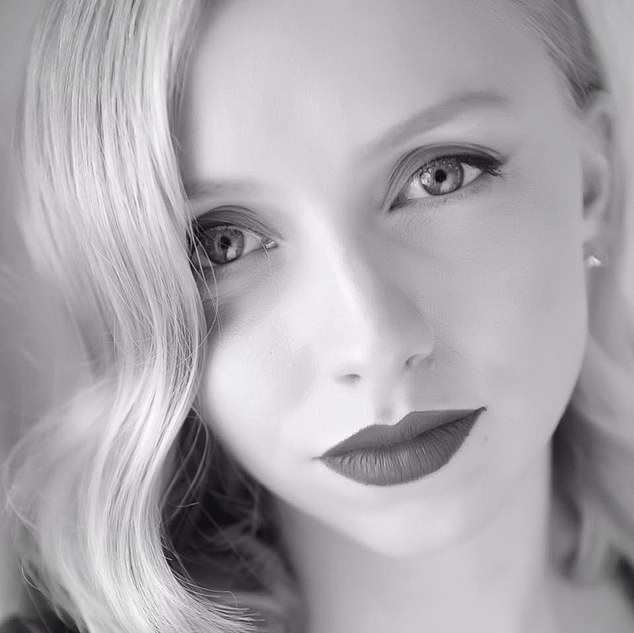 In a message to other musicians Ms Lapwood said: ‘It’s ok to be finding it difficult, I would also say it’s ok to not have the energy, mental or physical, to make music at the moment.’ 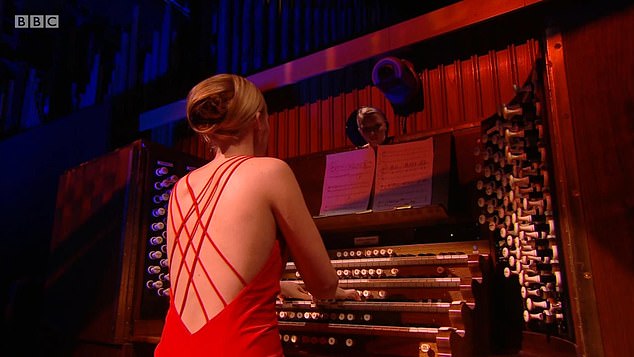 Ms Lapwood, who is a performing organist, seen during a performance on the BBC

‘Most musicians I know are juggling so many different things – family, new jobs to try and substitute lost income, home schooling.

‘I think the most important thing is that we’re kind and patient with ourselves.’

The musician also hosted a weekly classical music show, on BBC Radio Cambridgeshire, which has been halted due to the pandemic.

The first movement (Molto Allegro) of Mozart’s Symphony number 40 is the hold music played in the clip.