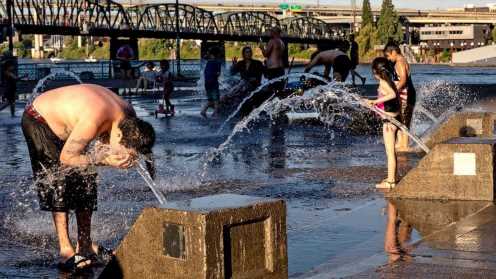 A dangerous and record-breaking heat wave has enveloped the Pacific Northwest, with the worst to come for Seattle and Portland — and soon the Northeast will be hit by a heat wave, too.

The Red Cross has established cooling centers across Oregon, according to ABC Portland affiliate KATU.

Monday is the hottest stretch of the heat wave for Seattle and Portland — both cities are forecast to climb above 110 degrees.

The oppressive heat is also stretching down to Southern California. Temperatures Monday are expected to reach a scorching 111 degrees in Seattle, 115 degrees in Portland, 110 degrees in Medford, Oregon, and 114 in Palm Springs, California.

Some cooling is expected for Seattle and Portland starting Tuesday and heading into Wednesday.

The heat wave will continue for most of the week in eastern and central Washington, Oregon and California.

Meanwhile, the Northeast is bracing for its second heat wave of the year.

Temperatures are forecast to be in the mid 90s Monday through Wednesday.

With humidity, it’s expected to feel like its 100 to 105 degrees in Boston, New York City, Philadelphia and Washington, D.C.