Singapore: Holed up in quarantine in Queensland, Ross Dunkley jokes that he’s swapped one prison for another. 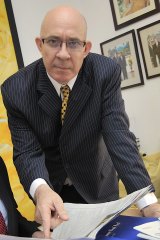 Ross Dunkley co-founded the Myanmar Times, among other publications in south-east Asia.

The Walkley-award winning former journalist and south-east Asia media tycoon is back in Australia after being released from jail in Myanmar two years and 10 months into a 13-year prison sentence.

Escorted directly from Yangon’s Insein Prison onto a plane on Thursday and then on to Australia via Singapore, he still hasn’t even had the chance to buy a mobile phone.

Originally sentenced to 13 years behind bars for drug offences, the 63-year-old Australian was last month pardoned along with 23,000 others in a prisoner amnesty announced by the country’s new military regime to coincide with the Buddhist new year.

Now, in an interview with The Sydney Morning Herald and The Age after being set free, the maverick former owner of major English language newspapers in Myanmar and Cambodia has spoken about life inside one of the region’s most notorious prisons, of sending messages and books to fellow Australian Sean Turnell inside the jail and of being set up.

It was a Wednesday night in June 2018 when Dunkley’s life was turned upside down.

He was at home with his girlfriend and friends in Yangon’s Bahan township when a dozen policemen brandishing shotguns and a battering ram burst in.

Dunkley, handcuffed and led away immediately, was one of nine people arrested in the raid and ultimately convicted after a 14-month trial. He insists, however, that the drugs were not his but a friend’s and his capture was connected to his plans to launch a new English and Burmese print, broadcast and online media venture in Myanmar.

“[The police] knew exactly where to go in my house. Some people were out to get me, it’s obvious. Who knows who is tipping them off?” he said.

“You make friends and you make enemies. Before I was arrested I had people from the Home Affairs Ministry coming to my home urging me to not go ahead with a rather large media project I had almost nailed away, worth several million dollars. Suddenly, I’m getting busted for drugs.” 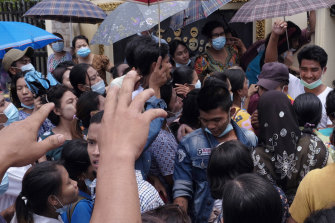 A crowd outside Insein Prison greets prisoners released by the Myanmar military junta on April 17.Credit:AP

Dunkley and his British friend John McKenzie, a former World Bank adviser who was also at his house that night, were the only Western inmates in the huge colonial-era prison for most of his time inside.

He says he was privileged to be housed along with 500 others in the hospital wing at Insein despite not needing to be there for any medical reason.

Ross Dunkley behind bars as shown in the documentary ‘Dancing with Dictators: The Story of The Foreign Publisher in Burma’.

“For me, I didn’t do the hard time that perhaps others did out in the general ward. I wasn’t beaten, I wasn’t abused. I had access to my embassy and I had plenty of good food and I slept OK.

“In some ways it was like being in a boot camp. I slept in a room half the size of a basketball court with 60 other people. You’d sleep on your swag and roll it up in the morning. We had a TV in the room and some overhead fans and that’s it.”

It wasn’t the first time Dunkley had been jailed. In 2011, just as Myanmar was beginning a democratic shift after half a century of military dictatorship, he was arrested for immigration breaches and allegedly assaulting a sex worker.

While he vehemently denied the assault, saying later he would “never consider doing that to anyone”, he was convicted and given 30 days’ jail. After spending 47 days in prison while he waited for the court verdict he was released immediately. 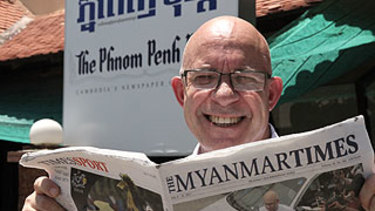 The West Australian co-owned major papers in Myanmar and Cambodia.

At the time Dunkley was still a co-owner of the English language Myanmar Times, which he founded in 2000, and of The Phnom Penh Post, into which he bought in 2007.

His newspapers were censored for much of the time he owned them, as was another title he previously had a share in, the Vietnam Investment Review, a business title sold in 1994 to James Packer.

It was when he tried to push back as the country was beginning a short-lived withdrawal from outright military rule that he was seized upon by authorities, he says.

“I was bullied and intimidated and put in jail in 2011 for defying the government.”

While Dunkley is out, Turnell, the Sydney academic, who was chief economic adviser to Myanmar’s democratically elected leader Aung San Suu Kyi remains at Insein prison. Turnell is accused by the junta of violating the country’s Official Secrets Act.

He was arrested five days after the February 1 military coup that has triggered turmoil in Myanmar. More than 750 people have been killed by security forces in a bloody crackdown against protesters and upwards of 4500 are reported to have been arrested. 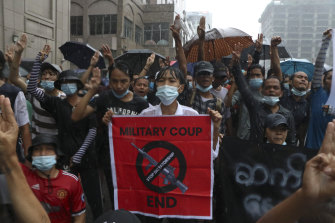 Anti-coup protesters in the rain in Pabedan, Myanmar, on Friday. People continue to demonstrate against the military coup despite a bloody crackdown claiming hundreds of lives.Credit:AP

One of many political prisoners held since the military takeover, Turnell is in a different section of the jail to where Dunkley was.

“He’s in a single cell. He’s locked away from the general population, obviously regarded as a bit of a political VIP,” Dunkley said.

“I got messages through to him and I was sending him lots of books and telling him to keep his chin up. 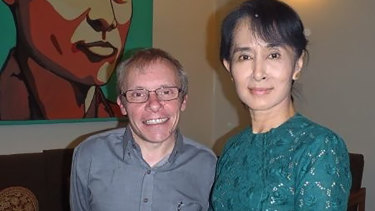 “I know Sean pretty well and I doubt if he’s done anything radical. He’s a pretty calm, cool guy, he’s not that sort that’s likely to be agitating against the government, I can guarantee that. He’s just caught up in a political web.”

Dunkley, however, fears Turnell’s association with Suu Kyi, who has herself been under house arrest for three months, could lead the junta to detain him for much longer.

Ready to put his own life back together after he’s let out of quarantine next week, Dunkley counts himself fortunate to have been freed early in one of two mass pardons since the coup that have cleared space for thousands of new prisoners.

“I’m very lucky. As one of my friends said, ‘you’re one of the only people who has benefited from the military coup’, which is probably bloody true,” he said.

“But I’m a little disappointed that I’m not in Myanmar at the moment. I’d like to go back there.”