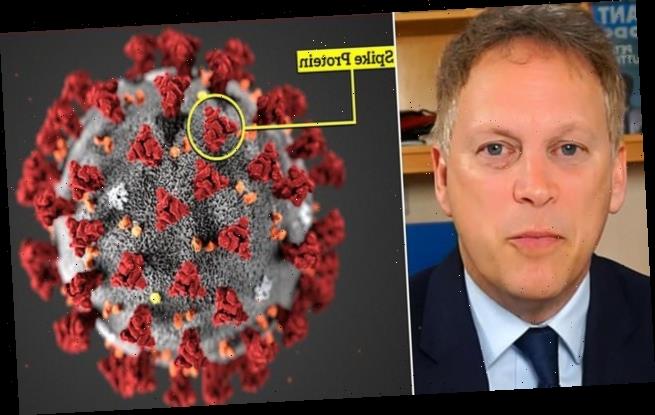 UK Transport Secretary Grant Shapps warned today the current wave of vaccines might not protect against the South African strain of coronavirus.

Mr Shapps said introducing a mandatory test and release system for travellers coming into the UK had become ‘much more urgent’ because of the threat the variant poses to Britain’s mass vaccination programme.

But there was confusion about the timing of his comments, which came just hours after a study by Pfizer/BioNTech suggested their vaccine could be just as effective against the super-transmissible strain.

Amid international fears about the South African strain, thought to be at least 60 per cent more infectious than regular Covid, the UK has made it compulsory for travellers to test negative when they arrive in the country.

Mr Shapps told Sky News: ‘This is an extra check and we’re doing this now because there are these variants that we’re very keen to keep out of the country, like the South African variant, for example.

‘There are the concerns about the South African one in particular about how effective the vaccine would be against it so we simply cannot take chances. So today because of that variant it has become much more urgent.’

The Pfizer study – which hasn’t been peer-reviewed yet – tested how well the vaccine worked on the key N501Y mutation, an alteration on the virus’s spike protein which is thought to be responsible for making it far more infectious than regular Covid. 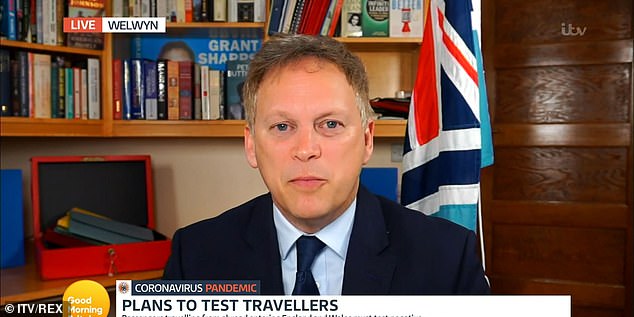 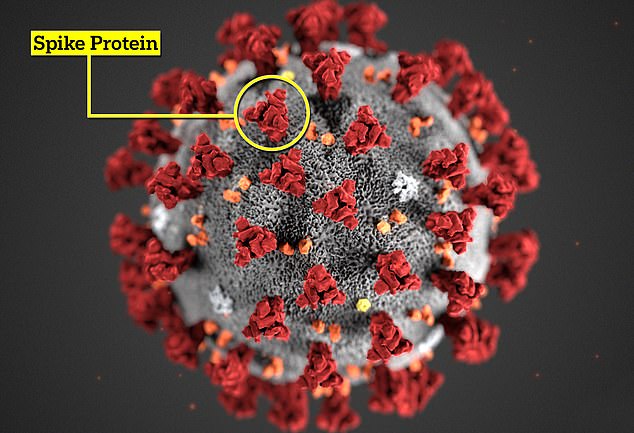 The mutations of the coronavirus has caused changes to the spike protein on its outside (shown in red), which is what the virus uses to attach to the human body (Original illustration of the virus by the US Centers for Disease Control and Prevention) 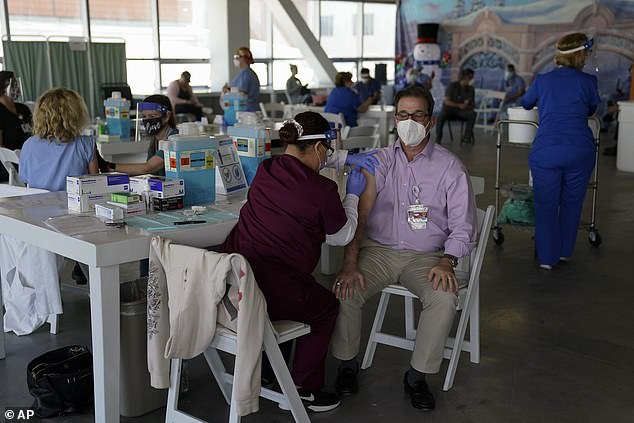 And because current vaccines work by training the immune system to recognise the virus’s spike protein and attack it, there were fears this change could render jabs useless, or less effective.

The researchers took blood samples from vaccinated patients and expose it to a strain of the virus with the N501Y mutation.

Has the variant been found in the UK?

The variant was found in two people, one in London and another in the North West, who came into contact with separate people returning from South Africa.

It was detected through the UK’s world-leading genomics sequencing group, which constantly monitors how the coronavirus spreads and mutates.

The two cases of the South African variant were detected through random routine sampling which picks out only around one in 10 tests carried out in the UK.

This suggests there are many more cases of the variant already in Britain.

Where has the new strain come from?

The new variant emerged after the first wave of coronavirus at Nelson Mandela Bay, in South Africa’s Eastern Cape Province, in mid-December.

South Africa picked up the strain through genomic sequencing.

It is believed to be the reason behind infections soaring from under 3,000 per day at the beginning of the month to over 9,000 by the end.

Where else has the variant been found?

Confirmed cases have been announced in France, Japan and Britain.

It is likely to be circulating in many more countries but only a select few nations have the genomic sequencing ability to be able to spot it when it’s present in low numbers.

What has been done to tackle it?

Both of the people in the UK who had the new strain of the virus were quarantined, along with their close contacts.

Public Health England researchers are currently investigating the variant at their research laboratory at Porton Down in Wiltshire.

All flights to and from South Africa have been banned.

What does it mean for the fight against the virus?

One mutation in the new strain, called N501Y, is thought to help the virus become more infectious – and spread more easily between people.

Scientists tracking the strain’s spread believe it is even more transmissible than the Kent strain currently plaguing the UK.

The British strain is 50 per cent more infectious than regular Covid, so this new South African variant is likely to be higher than that.

Studies are ongoing to put a figure on its transmissibility.

What about the vaccine?

Scientists are undecided about whether the South African strain will impact the current iteration of Covid vaccines.

Dr Susan Hopkins, from Public Health England, said there is no evidence yet that it will impact any of the current jabs.

But Sir John Bell, regius professor of medicine at Oxford University, argued the strain was more concerning than the Kent one.

He said it has ‘pretty substantial changes in the structure of the protein’, meaning vaccines could fail to work.

Scientists will test the blood of those who have been vaccinated against coronavirus, or have recovered from it, to ensure they can fight off the new strain.

The strain has a series of mutates on its spike protein, which it uses to latch onto and enter human cells.

Covid vaccines — including the Pfizer/BioNTech and Oxford University/AstraZeneca jabs currently being rolled out across Britain —  work by training the body to spot the virus’s spike protein.

If the spike mutates so much that it becomes unrecognisable then it could render vaccines useless or make them less potent.

Phil Dormitzer, one of Pfizer’s top viral vaccine scientists, said the vaccine stimulated a strong immune response against the altered virus, which he described as ‘good news’.

However, the findings are limited because the research only studied the N501Y mutation and did not look at the full set of alteration found in either the new UK mutant strain or the South African one.

Both strains have more than a dozen mutations. although most of them have no impact on the way it spreads and affects people.

Another mutation found in the South African variant, called E484K, which is not found in the UK version, is also concerning. It also seems to help the virus disguise part of its signature spike protein.

Dr Dormitzer said it was encouraging that the vaccine appears effective against the N501Y mutation, as well as 15 other mutations the company has previously tested against.

‘So we’ve now tested 16 different mutations, and none of them have really had any significant impact. That’s the good news,’ he said. ‘That doesn’t mean that the 17th won’t.’

The researchers plan to run similar tests to see if the vaccine is effective against other mutations found in the UK and South African variants and hope to have more data within weeks.

Sian Griffiths, who co-chaired the Hong Kong inquiry into the 2003 SARS outbreak, said a US university report into the Pfizer vaccine’s impact on UK and South Africa coronavirus variants is ‘good news’.

Professor Griffiths, an epidemiologist who also serves on an advisory board for Public Health England, told BBC Breakfast: ‘There’s some good news this morning – it’s not a peer-reviewed paper yet but it’s a report from Texas University where they took blood from patients who had been immunised and tested it against both the Kent and the South African strain and the results were very positive, meaning that the Pfizer/BioNTech vaccine does protect against those variants and also other variants.’

She said the UK’s ‘good genomics’ had allowed scientists here to understand the new variant which pushed infections up in London and the South East of England.

She said: ‘Other countries are needing to do more work on which variant it is that’s pushing their numbers up, and what we need to do is have these amazing scientific advances that we’ve made through the pandemic apply to making sure that vaccines do cover variants and therefore provide protection.

‘So the good news this morning is that it appears that the Pfizer/BioNTech vaccine does protect against the South Africa strain, so people can rest assured that that particular strain isn’t escaping the population.’

Scientists have expressed concern that vaccines being rolled out may not be able to protect against the new variants, particularly the one that emerged in South Africa.

Simon Clarke, an associate professor in cellular microbiology at the University of Reading, said this week that while both variants had some features in common, the one found in South Africa ‘has a number additional mutations’ that included more extensive alterations to the spike protein.

The British strain, which first emerged in Kent in September, has been shown to be about 50 per cent more infectious than regular Covid.

Scientists say the South African strain is even more infectious than the Kent one, although studies are still ongoing to put an exact figure on its transmissibility.

But experts have told MailOnline there was no publicly-available data to suggest any of the new strains possesses the ability to escape the current iteration of jabs, even though they are more transmissible.

Professor Ian Jones, a virologist at the University of Reading, claimed he was ‘almost certain’ the vaccines will still be effective at some level.

He added that, in the unlikely event any new strain does makes vaccines redundant, it would take ‘a few days or less’ to tweak the jabs to target them.

Professor Jones told MailOnline: ‘At the moment there is no data on the ability of either the UK or SA variants to evade the immune response generated by the vaccine.

‘The vaccines all produced multiple antibodies that block the virus-receptor interaction and while the changes in the variants might dodge a few of these they are unlikely to dodge all of them so it is almost certain the vaccine will still be effective at some level.

‘And as long as severe Covid is prevented even a partially effective vaccine would be useful. If a change in the vaccine was required the genetic alternation required could be done in a few days but of course the scale up to millions of doses will take time.’

Vaccine makers have said they are already looking at ways to tweak their jabs to protect people from new variants.

Professor Sarah Gilbert, one of the leading scientists behind the Oxford/AstraZeneca vaccine, told the BBC today: ‘We are looking at how well [the vaccines] work on these new variants and others that will come in the future.

‘And we’re also thinking about what we’ll need to do if it ever becomes necessary to replace the version of the vaccine we’re using now with a new one.

‘So, with my team, I’m still working on how we make that change really quickly if we ever need to.’

Asked how quickly that change could come if needed, Professor Gilbert added: ‘We don’t expect to have to make a switch in the near future. But we’re thinking that this vaccine is going to be used over a period of many years probably.

‘As with flu vaccines we have a new version every year, which takes into account the changes in flu viruses circulating. Something similar is probably going to have to happen with the coronavirus vaccines.

‘I don’t think it’s necessarily going to be a very rapid switch that we have to make. But what we might be looking at is when we’re coming round to planning vaccinations for next autumn, thinking about another wave at end of 2021, which is a theoretical possibility, we will be considering whether to continue with the same version [of the vaccine] or a different version.’

German firm BioNTech, which helped deliver the Pfizer vaccine approved in the UK last month, said it could use existing technology to produce a new vaccine against mutations of coronavirus in six weeks.