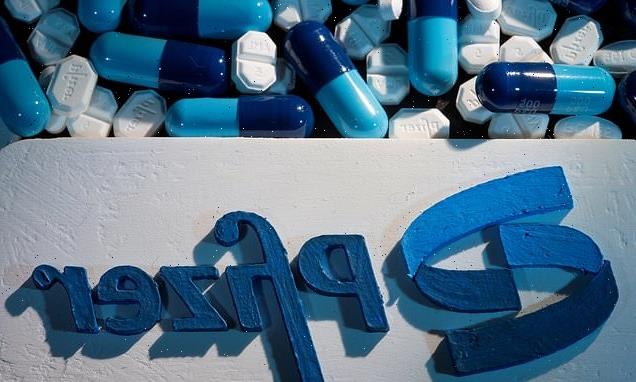 Pfizer today claimed its Covid pill cuts the risk of patients dying by up to 90 per cent, potentially providing the UK with another weapon to combat the pandemic.

The pharmaceutical giant stopped its trial of the twice-a-day antiviral medication early because of the promising results.

The findings appear to surpass those seen with Merck’s rival pill molnupiravir, which data showed halved the risk of death or hospitalisation.

Full trial data is not yet available from either company.

Pfizer plans to submit interim trial results for its pill, which is given in combination with an older antiviral called ritonavir, to the US Food and Drug Administration as part of the emergency use application it opened in October.

It is not clear whether it will seek approval in the UK at the same time.

It comes after Britain yesterday became the first country in the world to approve Merck’s antiviral. No10 has signed deals to buy both options, 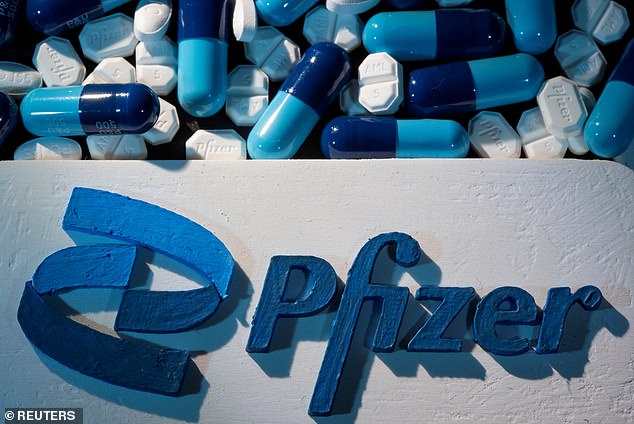 The combination treatment, which will have the brand name Paxlovid, consists of three pills given twice daily.

The planned analysis of 1,219 patients in Pfizer’s study looked at hospitalizations or deaths among people diagnosed with mild to moderate Covid with at least one risk factor for developing severe disease, such as obesity or older age.

It found that 0.8 per cent of those given Pfizer’s drug within three days of symptom onset were hospitalised and none had died by 28 days after treatment.

For comparison, the hospitalisation rate stood at 7 per cent for the patients given a placebo. There were also seven deaths in the placebo group.

Rates were similar for patients treated within five days of symptoms.

Antivirals need to be given as early as possible, before an infection takes hold, in order to be most effective. Merck tested its drug within five days of symptom onset.

‘We saw that we did have high efficacy, even if it was five days after a patient has been treated… people might wait a couple of days before getting a test or something, and this means that we have time to treat people and really provide a benefit from a public health perspective,’ Annaliesa Anderson, head of the Pfizer program, said.

The company did not detail side effects of the treatment, but said adverse events happened in about a fifth of both treatment and placebo patients.

‘These data suggest that our oral antiviral candidate, if approved by regulatory authorities, has the potential to save patients´ lives, reduce the severity of Covid infections, and eliminate up to nine out of ten hospitalizations,’ Pfizer’s chief executive Albert Bourla said.

Pfizer’s drug, part of a class known as protease inhibitors, is designed to block an enzyme the coronavirus needs in order to multiply.

Merck’s molnupiravir has a different mechanism of action designed to introduce errors into the genetic code of the virus.

Merck has already sold millions of courses of the treatment, which was approved this week by UK regulators, to the US, Britain and others.

Britain said earlier this month it had secured 250,000 courses of Pfizer’s antiviral.

Pfizer is also studying whether its pill could be used by people without risk factors for serious Covid as well as to prevent coronavirus infection in people exposed to the virus. 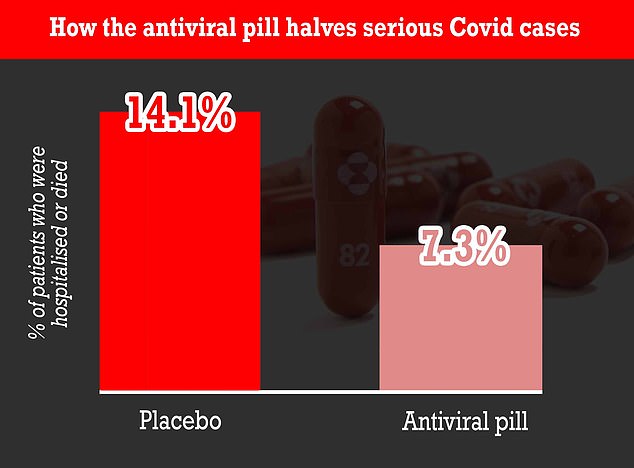 A landmark study at the start of the month showed molnupiravir can cut hospitalisations and deaths by up to 50 per cent. It works by disrupting the Covid virus’s ability to reproduce in the human body