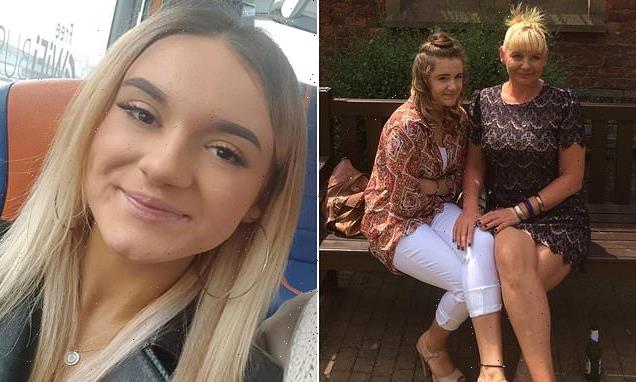 Heartbroken pharmacy worker, 20, took her own life after suspecting her boyfriend was cheating on her with another woman, inquest hears

A heartbroken pharmacy worker took her own life with a lethal overdose of prescription medication after suspecting her boyfriend was cheating on her with another woman, an inquest heard.

Victoria Doheny, 20, had tried to contact Mark Power without success on the night of her death, December 10, 2020, after hearing of his new relationship days before.

Unable to reach Mr Power, Miss Doheny then sent her boyfriend’s lover, known only as Molly, a text saying she had taken a number of tablets.

In response Molly pleaded: ‘Do not do anything like that, please Vic. Try to go to sleep, I will make sure he cannot see anything, please don’t do anything’.

But in her final message Miss Doheny told her: ‘I am broken, all I do is cause problems. I need someone to care, and no one does. My life is sh**t, I can’t do it anymore. I don’t want to do this Molly but it is too late.. I have taken all the medication.’

She was found dead the next morning at 9am on December 11 at the home of her half-sister in Salford, Greater Manchester. 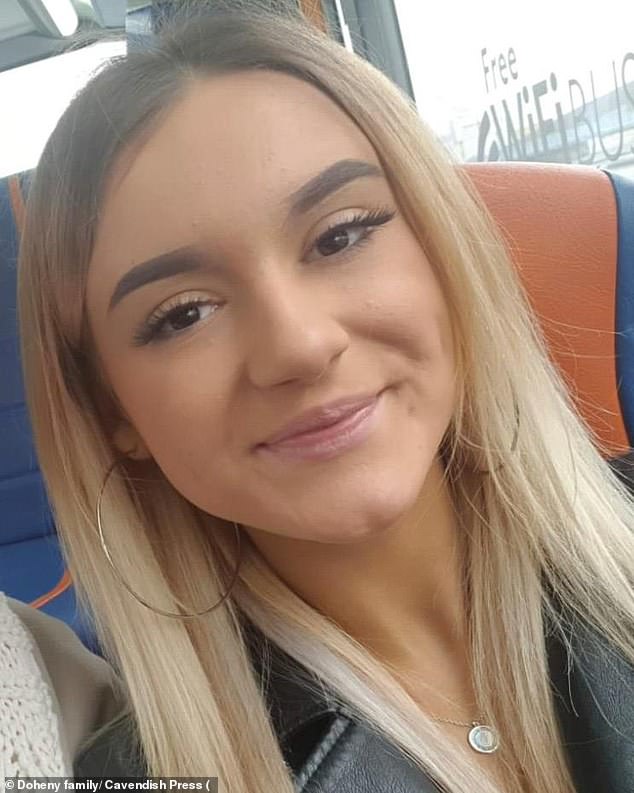 Victoria Doheny, 20, (pictured) took her own life on December 10 after hearing of her boyfriend’s new relationship

Miss Doheny’s mother Gemma Doheny said: ‘Whilst she did end her life, I do not believe that was her intention. I think deep down she loved her family, and she would have left a note or sent a text message. She would not have just left without saying nothing.’

The inquest heard Miss Doheny, who had worked as a dispenser for a pharmacy near Davyhulme, Trafford, Greater Manchester, had begun a relationship with delivery driver Mr Power in August last year after meeting him through work.

Her father Christopher Dean told the hearing in Bolton, Greater Manchester: ‘She would stay at his at the weekends and he would pick her up and then she would come home to work on the Friday and Saturday. She would then go back to his after her shift on Saturday.

‘But on December 4 2020, she came home, and she didn’t seem right. She was anxious and uncomfortable. It seems Mark had been cheating on her with a girl called Molly.

‘She was upset and emotional and she said she thought it had been going on for some time. This girl also texted her on the Friday night saying she was seeing him. 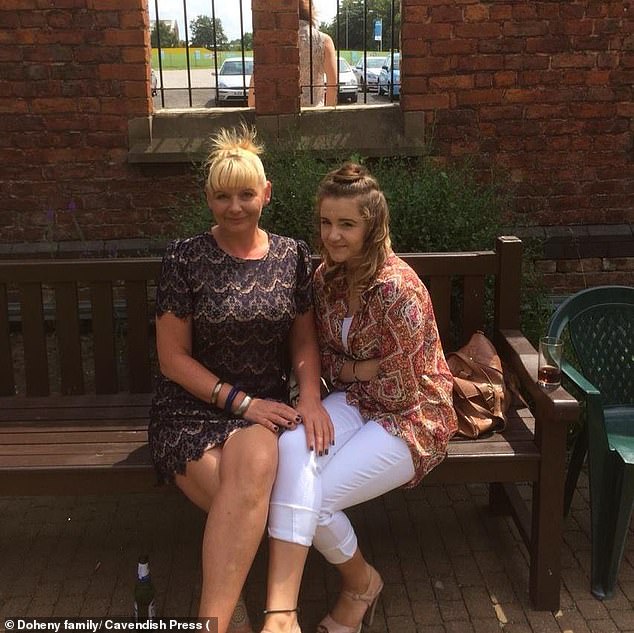 Miss Doheny pictured with mother Gemma. The pharmacy worker took her own life with a lethal overdose of prescription medication

‘On the Saturday, we went over to Mark’s house in Halifax to get her belongings. She went into his house but then came out to me saying she was going to stay. She would not let me come into the house.

‘On December 6, Mark brought her back to our address and she said she was going to stay with her stepsister in Salford, I didn’t believe her as I had my suspicions that she was going to go back to Mark’s.

‘From that day I did not see her. She left work on December 10, saying she was sick and was then found dead on December 11. I only noticed a change in Victoria when she started seeing Mark. I believe her intentions were to take her own life.’

Ciara Gorman, Miss Doheny’s half-sister said that Miss Doheny had come to live with her on December 6, but that Mr Power would come and pick her up and taken her to his.

She told the inquest: ‘I was aware of the cheating and said it would be best for her to end the relationship. But when she saw him, her confidence started to waver.’ 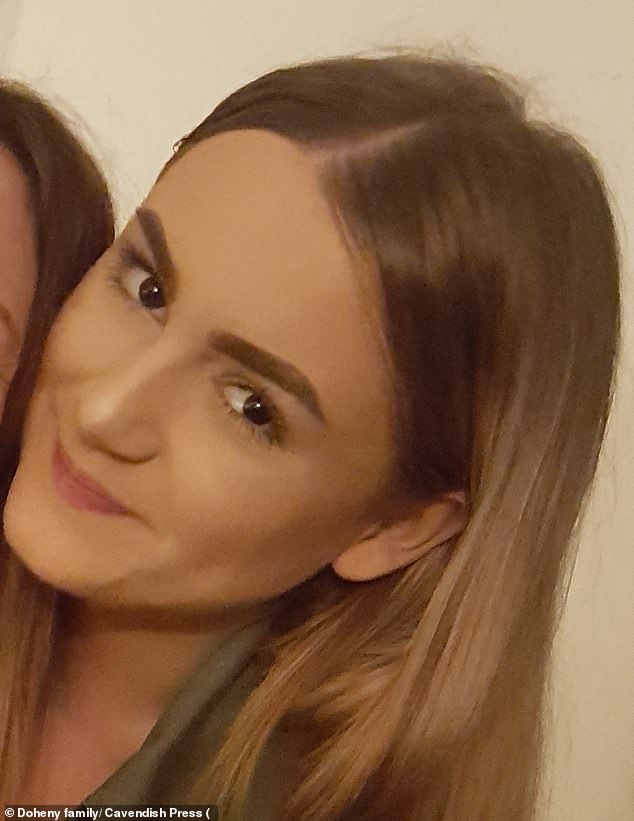 Recording a conclusion of suicide Bolton coroner Prof Alan Walsh said: ‘Victoria had complex issues in her mind, but she did have the support of her family.’ Pictured: Miss Doheny

Ms Gorman said that Miss Doheny had left work sick between 5 and 6pm on December 10 and had let herself into her half-sister’s home in the evening.

The pair had a conversation about Mr Power’s new relationship, and Ms Gorman advised Miss Doheny to ‘leave it and go to sleep’, refusing her alcohol, the inquest heard.

Ms Gorman told the inquest: ‘At 9am the following morning I went to the bathroom, and I saw Victoria on the floor to the entrance of her bedroom.

‘I rang an ambulance and they said she had sadly died. She was trying to contact Mark that evening but couldn’t get hold of him.’

Ms Gorman added: ‘I had a tablets draw in the kitchen, which she knew about.

‘I do not know if she intended to take her own life that night but whatever was happening got the better of her.’ 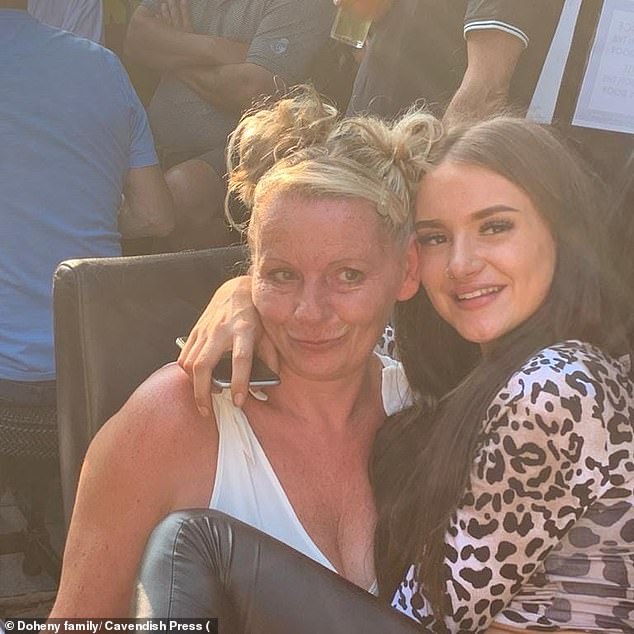 Mr Power did not attend the inquest. In an unsigned statement given to police he said: ‘It was a long-distance relationship. She would come to me at the weekend and I know she had issues before with self-harm.

‘I do not think her Mum and Dad supported her properly and we split up because I struggled to take care of her. Molly was very nice to Victoria and at the end of the day, I loved Victoria to bits. She did not have a lot of friends and that is why she was lonely.’

The hearing was told Miss Doheny had a history of depression, anxiety and panic attacks, and had been prescribed medication.

Police coroners officer Benjamin Dobbs said ‘numerous empty blister packets were found’ but that no messages ‘indicating her intentions’ were found in the flat.

He added that Mr Power was not in court because he felt the family would blame him.

Recording a conclusion of suicide, Bolton coroner Prof Alan Walsh said: ‘Victoria had complex issues in her mind, but she did have the support of her family.

‘She was a bright, young lady and I believe she had a future in pharmacy work but there was clearly a change in her behaviour which may well have occurred at the time of her relationship.

‘The text messages between Molly and Victoria is significant. She admits to taking tablets and clearly working in a pharmacy increases the knowledge of medication that she would have had.

‘During the night of December 10 she kept trying to contact Mark Power without any success. She was on her own and she admitted taking the tablets to Molly. It appears to me she was badly affected by the relationship with Mark Power.

‘She tried to contact him on the night she died and whilst you all tried to help her, you could not overcome this connection. The family could not have done more to support her. I truly am very sorry for you all.’

Anyone seeking help can call Samaritans free on 116 123 or visit Samaritans.org