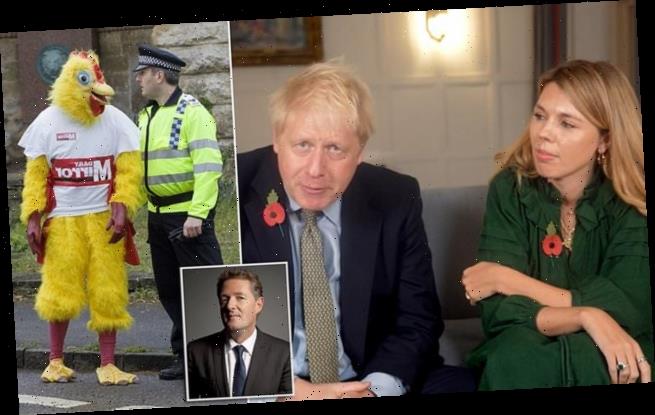 PIERS MORGAN: Good-riddance to Boris’s hapless chicken aide but now this useless, lame-duck twerp of a Prime Minister, who takes his orders from his fiancée, should follow his lead and quack off too

Today’s headlines should have been dominated by one sombre news story.

The UK just passed the shocking and shameful milestone of 50,000 official covid-19 deaths, the first country in Europe to reach this appalling coronavirus toll.

It’s estimated from a study of excess deaths that another 20,000 people have died from covid-related illness, taking the real total to over 70,000.

To put this into historical perspective, that’s more than the number of civilians who were killed in Britain during the entirety of World War 2, and it’s happened in just seven months, not five years. 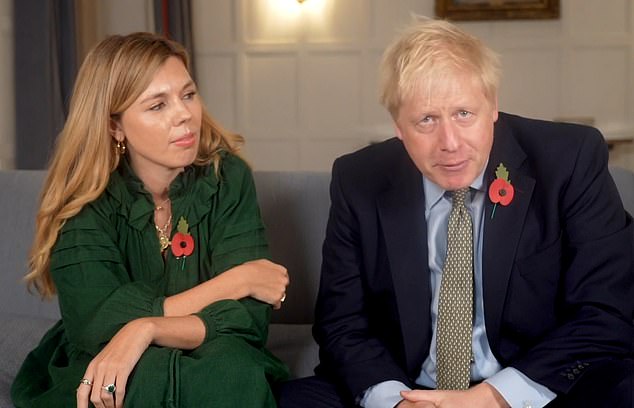 Added to this, the UK has also endured the worst economic meltdown from the pandemic.

Indeed, the financial collapse has been so disastrous that even though our economy just bounced back by 15.5% in the last quarter, it still remains 8.2% smaller than before the crisis started.

Yet what are the headlines today?

More from Piers Morgan for MailOnline…

Most of them concern the seething cesspit of infighting among Boris Johnson’s closest aides inside No10 Downing Street, which has led to the resignation of his Director of Communications, Lee Cain.

In many ways, Cain typifies the appallingly mediocre, two-faced, incompetent and shambolic malaise at the heart of Johnson’s government.

In his former incarnation as a very average journalist for the Daily Mirror, he used to dress up as a giant yellow chicken and go out onto the streets to ambush senior Tory ministers because they refused to take part in TV debates.

Cain was incensed by their failure to do their democratic duty and be held accountable to the electorate on TV.

Cut forward to this year, and the same Lee Cain is the man who led the ongoing 197-day boycott of my show, Good Morning Britain, because we had the audacity to hold Government ministers accountable to the electorate on TV.

Amazing what a bit of power can do to a man’s principles.

But then Cain’s a putrid pea from the same nasty little pod as Boris’s senior adviser Dominic Cummings, another shameless bone-headed bully-boy hypocrite who helped set the rules for the first coronavirus national lockdown – and then broke a load of them himself but refused to quit. 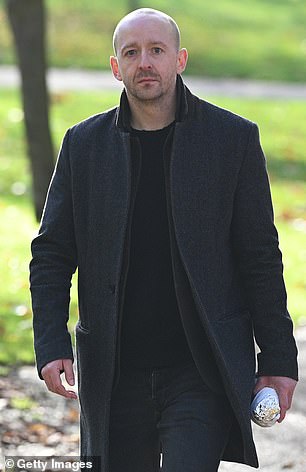 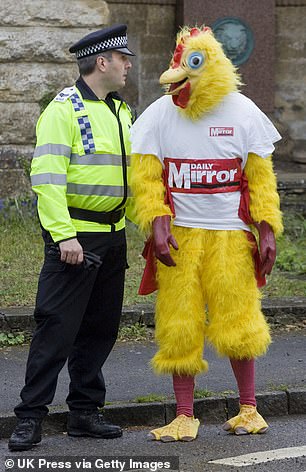 Cummings, with his selfish reckless arrogant behaviour, destroyed public confidence in the Lockdown, and many lives will have been lost as a result.

Just as Cain’s horrifically bad communications operation from No10, dominated by endless damaging U-turns and mixed messages, have destroyed public confidence in almost everything the Government now says or does, and that too has cost many lives.

Now Cain has been seen off by the Prime Minister’s fiancée Carrie Symonds, backed up by two other formidable females, the PM’s new official spokesperson Allegra Stratton and his director of policy Munira Murza.

And Cummings looks set to follow him out the door.

Yet in the end, the buck doesn’t stop with these two cocky little clowns.

It stops with their boss, Boris Johnson – the worst Prime Minister it has ever been my torment to experience as a citizen of the United Kingdom.

This blustering, bullsh*tting, blathering buffoon has exposed himself to be the very worst kind of leader at a time of a national crisis that required the very best kind.

If he was appearing at a public inquiry right now to examine his handling of this pandemic, as one day he most certainly will, the charge sheet would so long and devastating that it would be simpler for him to just admit he got everything wrong and beg for our forgiveness.

There are many other fingerprints on the dreadful decisions that have been taken this year, but he’s the Boss, so he is ultimately responsible. 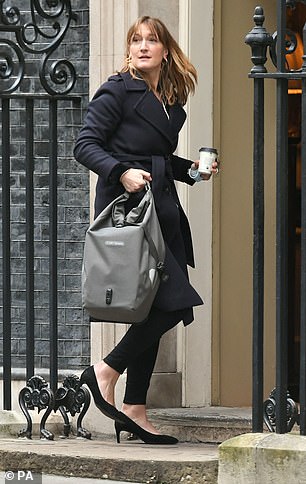 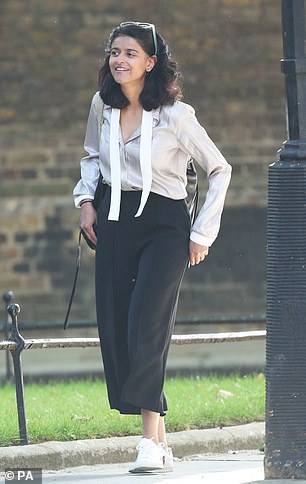 Cain has been seen off by the Prime Minister’s fiancée Carrie Symonds, backed up by two other formidable females, the PM’s new official spokesperson Allegra Stratton (left) and his director of policy Munira Murza (right)

Boris failed to take the virus seriously until it was too late, missing five consecutive COBRA meetings while he sorted out his chaotic private life, proudly telling us all he shook as many hands as possible when attending a hospital with coronavirus patients, and allowing mass spectator events like the Cheltenham Festival and Liverpool football matches to ahead even after the World Health Organisation declared this coronavirus outbreak a global pandemic.

He failed to order the first Lockdown in time, an inexcusable two-week delay that experts now believe cost at least 25,000 lives.

He failed to protect health and care workers with enough Personal Protective Equipment (PPE), causing many hundreds of them to die on the frontline.

He failed to control our borders, inexplicably allowing 20 million people to fly in from corona-ravaged countries like Iran, Italy and China for months without testing them on arrival or ordering any quarantine.

He failed to protect millions of elderly and vulnerable people in care homes, sending 25,000 of them back to their homes to clear space in hospitals without even checking if they had covid.

He failed to implement a proper testing system, and still hasn’t.

He told us for months that we didn’t need face masks when Asian countries were all using them from January. 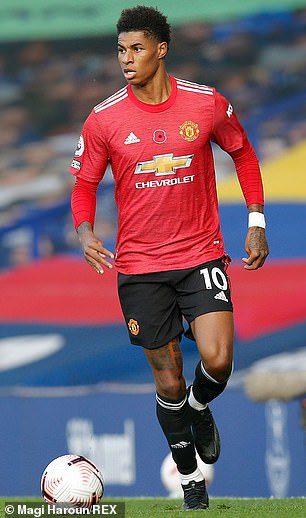 Boris has had to be repeatedly shamed by footballer Marcus Rashford into helping 1.5 million of our poorest, neediest kids get a proper meal

He wrecked education for millions of children this summer with a series of calamitous blunders along with his spectacularly dreadful education secretary Gavin Williamson.

He had to be shamed by Syrian filmmaker Hassan Akkad, working as a cleaner on a hospital covid ward at the time, into dropping a disgraceful NHS surcharge on the very kind of migrant workers in our health system who helped save his life when he got covid, and an even more repulsive policy decision not to let families of NHS migrants who died risking their lives to save ours, stay in the country.

He also had to be repeatedly shamed by footballer Marcus Rashford into helping 1.5 million of our poorest, neediest kids get a proper meal.

Now he’s repeating the same mistakes he made at the start of all this.

Boris ignored his own expert SAGE advice in late September to order a second national lockdown ‘circuit-breaker’ to stop the virus erupting again.

By the time he did what he said he wouldn’t do, it was too late again and we’re now seeing horrifying daily 4-500 death totals and covid hospitalisations in some parts of the country at even higher levels than during the first wave.

And his government’s ongoing guidance as to what the lockdown rules are remains ridden with confusion, incomprehensible rhetoric, and a stunning lack of common sense.

Even when we finally got some good news with the Pfizer vaccine this week, Boris made a mockery of it by banging on about the ‘toot of a bugle’ as if he was on some fox hunt with his old Etonian mates.

In summary, Boris Johnson has been a complete and utter disaster in this crisis, aided and abetted by a miserably incompetent cabinet and a snarling herd of vile and professionally terrible advisers.

The Prime Minister’s chronic ability to lead, or even make a decision, has inevitably led to the farcical scenes we’ve seen erupt this week in No10 in which his own fiancée Carrie Symonds is reported to have told him that Lee Cain couldn’t be promoted – yes, promoted!! – to Chief of Staff.

Boris backed down to her demands, and Cain promptly quit in a fit of pique.

No offence to Ms Symonds, who seems to have far better political judgement than her hapless husband-to-be, but what the hell has this country come to when such important decisions are being made not by the pathetically weak Prime Minister but the unelected woman who shares his bed?

It perfectly exemplifies the rudderless nature of this drifting wreck of a government, run by a mop-haired cackling twerp and his ever more tuneless tooting bugle.

It’s not just ‘Chicken’ Cain who should be driven out of Downing Street.

His boss should quack off too before yet more lives are lost.