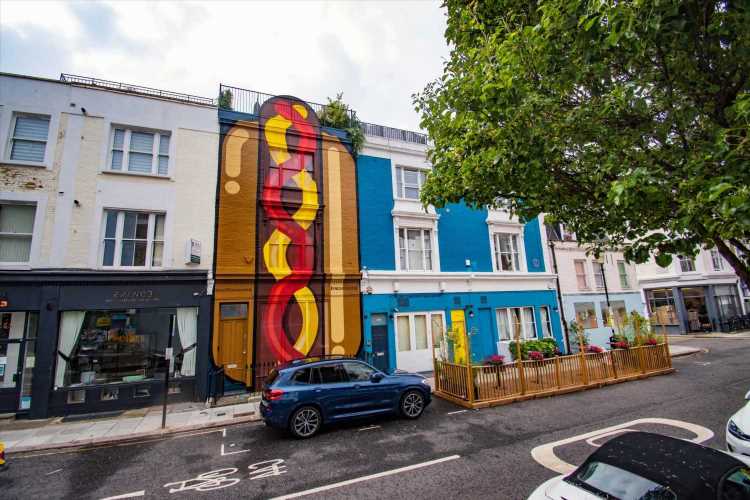 NEIGHBOURS in a posh street in London’s trendy Notting Hill are horrified after a house was painted as a gaudy giant Hot Dog.

The enormous hot dog mural left well-heeled neighbours moaning about the garish artwork since its installation over the weekend. 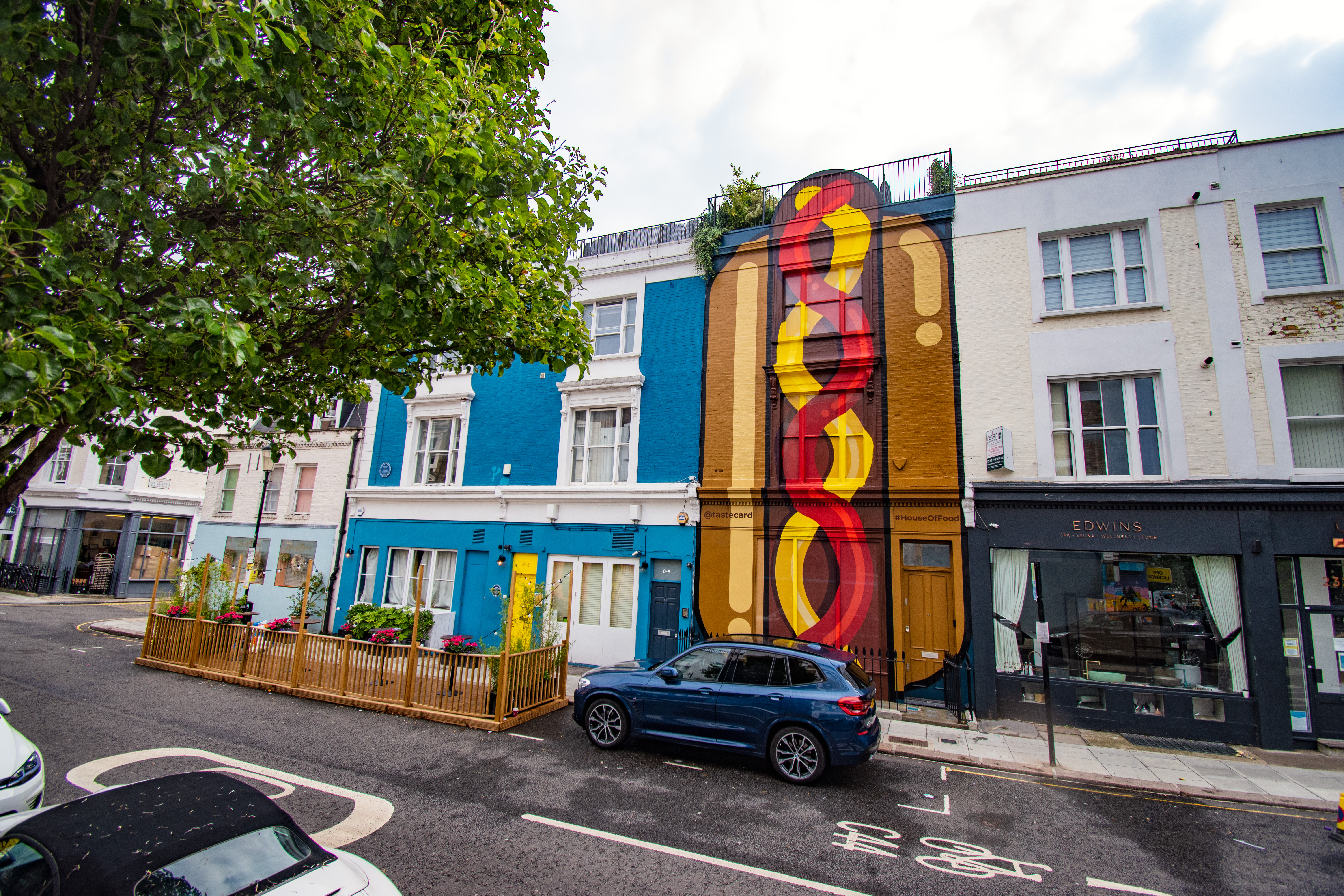 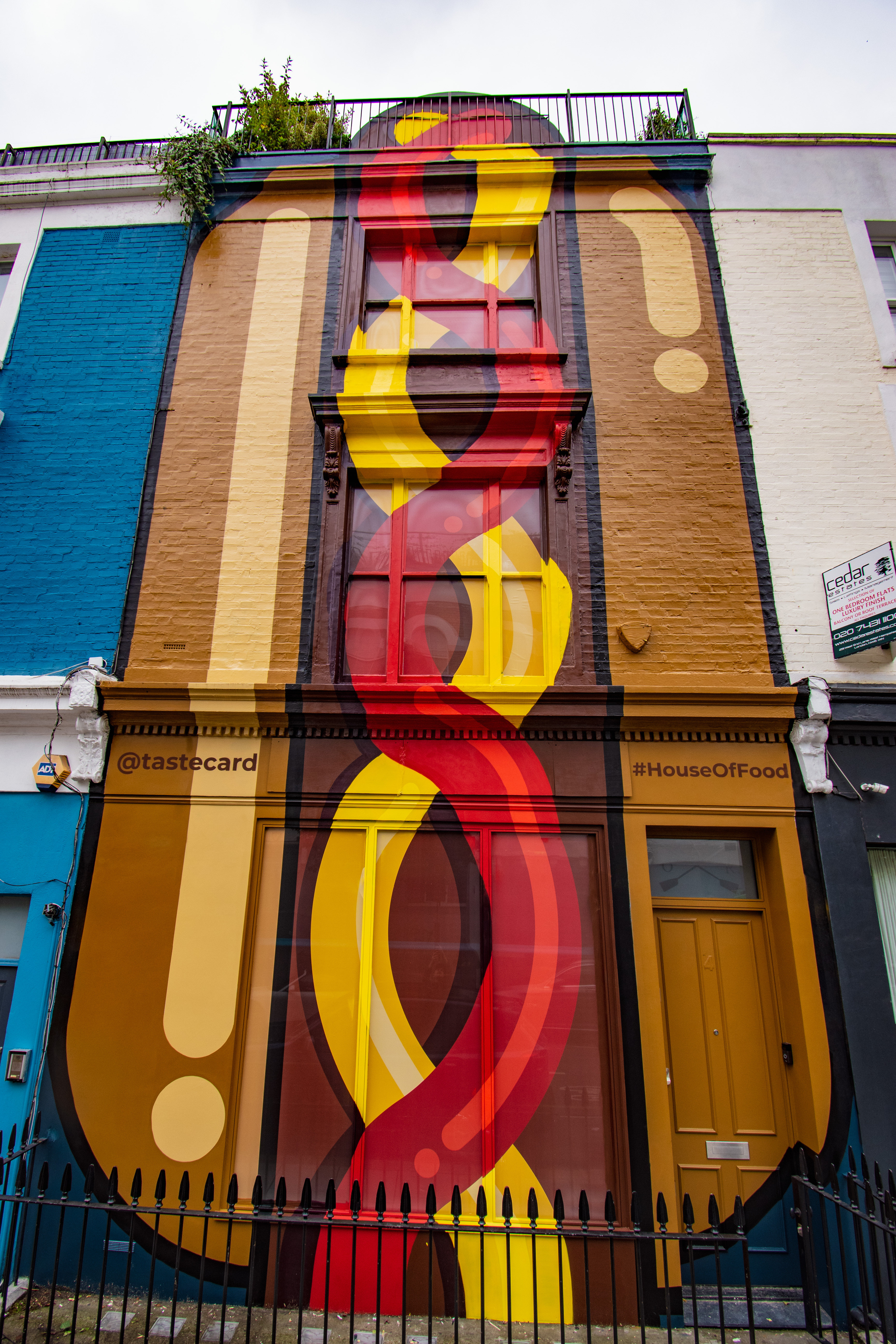 The giant hot dog was commissioned by tastecard, who offer cheap dining experiences and have ramped out food delivery wars by claiming they are the ‘House of Food’.

tastecard has vowed to take on the big players such as Deliveroo and Just eat with a series of controversial events to highlight the cost of delivery from some companies.

They launched their food war by turning the £3m house on a quiet and quaint street in the area of posh Notting Hill into a mouth-watering ‘house of food’ spectacle, encouraging people to download their app rather than others.

The event is part of tastecard’s delivery war to show Brits that you can order restaurant-quality-food-at-home for a fraction of the price when compared to other mainstream delivery companies.

But one furious elderly resident who refused to be named spent most of the day watching the artists at work and asking “when is this going to be taken down?!”.

tastecard joined forces with Global Street Art to produce the artwork which has been stopping people in their tracks and attracted the attention of ‘foodfluencers’ who have been heading to the location to capture the giant hot dog for their social media followers.

Matt Turner, Founder and CEO of tastecard said: “With The House of Food in London, we have created a bold and fun activation to encourage the great British public to enjoy fantastic restaurant quality food at home and join tastecard in supporting the UK hospitality industry as we come out of the pandemic.

"We offer customers fantastic value on delivery at home across the UK and The House of Food could be rolled out across more cities as we continue on our mission to support the UK hospitality sector, whilst offering customers the very best value on home delivery.”

"In comparison to the major players in the food delivery space, who on average charge restaurants 30% commission for every order, tastecard’s fee is a significant reduction at 5-7% in a bid to support the nation's restaurants through what has been a tumultuous year.

"With food delivery in its prime right now and the hospitality industry being tested beyond its limits, tastecard took its original dining out model and entered the food delivery game late last year, launching a rival service that commits to an always on discount of at least 10 per cent.

"tastecard plans to operate its delivery service in fifty cities nationwide by the end of the year, already operating in 8 cities with over 1500 restaurants on its app including Island Poke, Shoryu and Flip the Bird."

The artwork covering the front of the house on All Saints Road, London has sparked a flurry of complaints but some have called for it to remain as a permanent fixture of ‘Noshing Hill’ as a means to drive awareness of supporting the hospitality industry during covid.

tastecard began life as tastelondon in 2006 with two main aims – to help our restaurants by encouraging people to eat out more often, and to help its members by making eating out more affordable.

Starting with just 150 restaurants in Central London they quickly grew and re-branded to tastecard in early 2010 as they reached 2,500 nationwide restaurants.

As the recession bit, they gave members the opportunity to save money without compromising on their lifestyles and helped restaurants to continue trading in the toughest times seen for a generation.

Today, with over 1,400,000 members and thousands of restaurants, they are proud to say that members currently spend in excess of £600m annually in their restaurants; ensuring that their dining co-operative proposition remains strong.

tastecard has grown hugely since their inception is now the leading diners' club in the UK. They remain true to their roots, offering members fabulous value and choice, and our restaurants a veritable army of foodies through their doors!

People can tag in @tastecard and use #HouseOfFood for a chance to win a 12-month membership and £75 worth of Delivery & Collection vouchers. 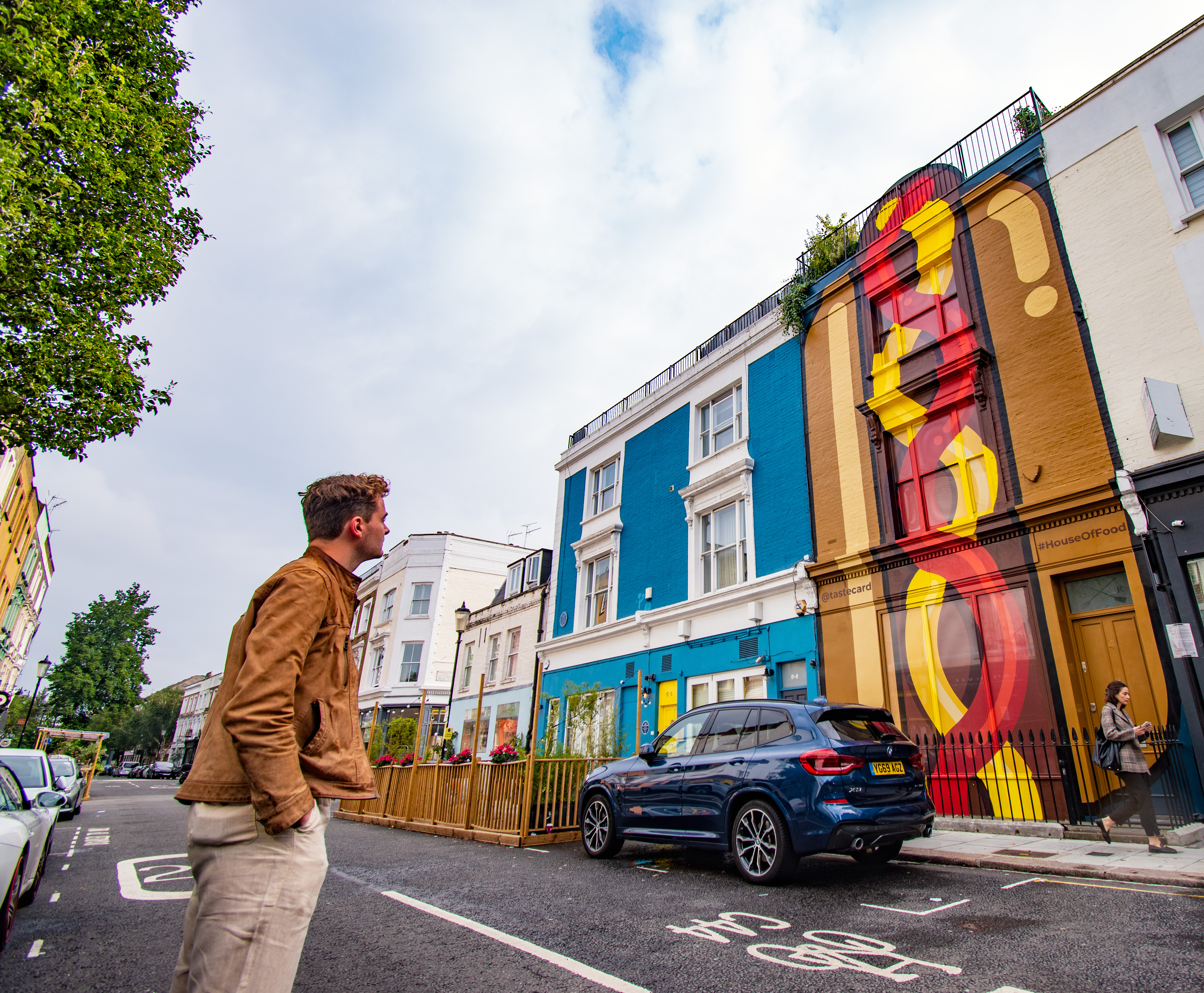