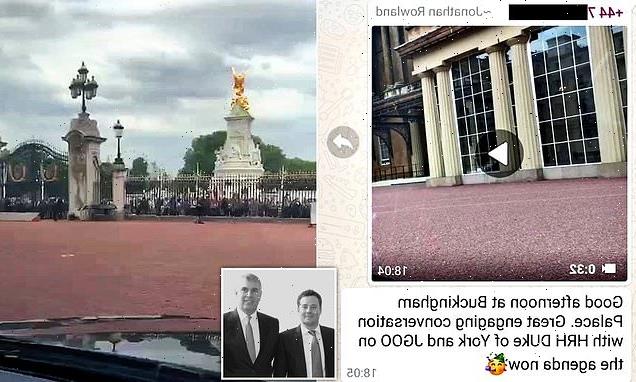 Prince Andrew’s Palace talks with son of tycoon who paid off his £1.5million loan: Businessman Jonathan Rowland posted video to staff from inside Buckingham Palace grounds boasting of boost for firm

It comes amid calls for an inquiry into the Duke of York’s finances after it was reported last week that Mr Rowland paid off a £1.5 million loan given to Andrew by Banque Havilland, a secretive bank for the super-rich controlled by the Rowland family.

Details of the loan raised suspicions because two years ago The Mail on Sunday revealed how Andrew had exploited his taxpayer-funded role as Britain’s trade envoy to quietly work behind the scenes for Mr Rowland, a controversial financier and Tory Party donor. 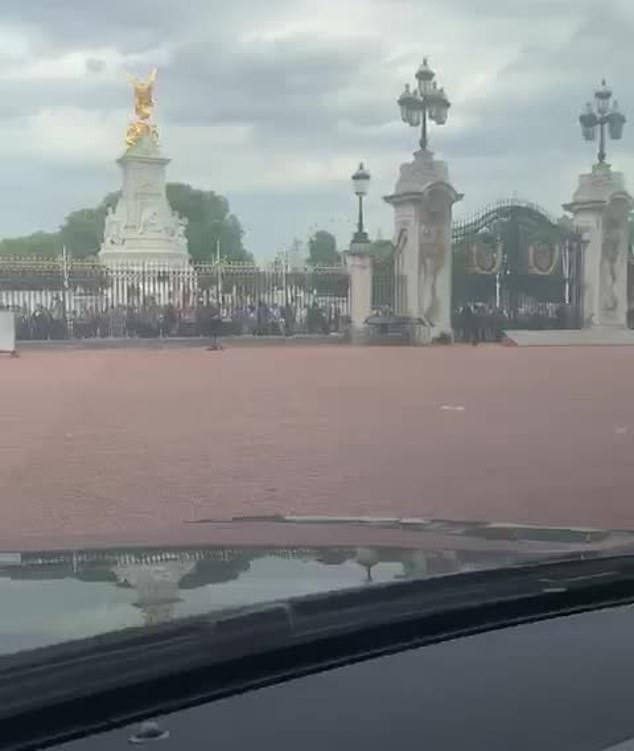 The footage, seen by the Mail on Sunday, was recorded from inside a Mercedes and shows it passing through the Palace’s grand central courtyard

Now, this newspaper can reveal that Mr Rowland’s son Jonathan – Banque Havilland’s former chief executive – boasted of holding a meeting with Andrew at Buckingham Palace at a time when he was trying to land a potentially lucrative business deal involving the Royal estate.

He even sent staff at his company JGOO an extraordinary video recorded from within the Palace’s gates.

The footage, seen by the MoS, was captured from inside a Mercedes as it passed through the Palace’s central courtyard and underneath an arch, before sweeping along the red gravel concourse and towards The Mall.

A message from Jonathan Rowland accompanying the video boasted that he had enjoyed a ‘good afternoon at Buckingham Palace’ and a ‘great engaging conversation with HRH Duke of York’. 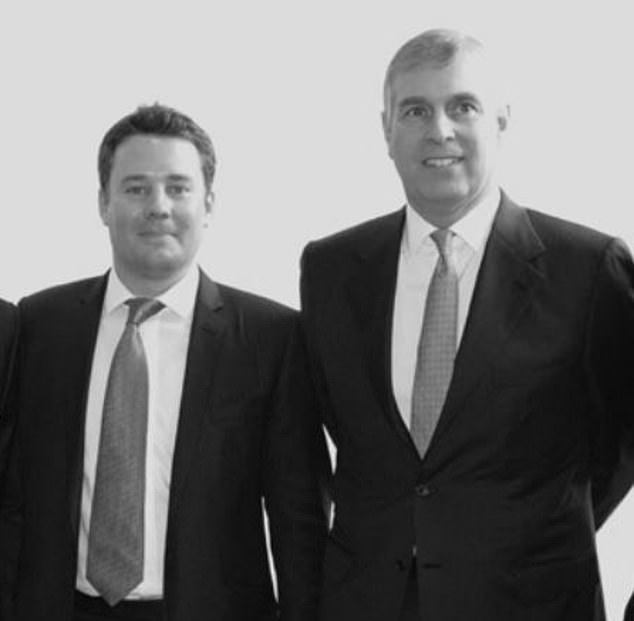 Jonathan Rowland, left, pictured with Prince Andrew in 2009. The Duke co-owned a business with the Rowlands in a Caribbean tax haven and made a secret deal to fly around the world on a £40 million jet owned by David Rowland

JGOO, which helps British firms take payments from wealthy Chinese visitors, was ‘on the agenda now’, he said, adding a celebration emoji with a party-blower.

The message raises new questions about the close ties between Andrew and the Rowland family.

In December 2019, the MoS exposed how, while on official trade missions meant to promote UK business, Andrew was quietly plugging Banque Havilland.

We also revealed that the Duke co-owned a business with the Rowlands in a Caribbean tax haven and made a secret deal to fly around the world on a £40 million jet owned by David Rowland.

Last week, financial website Bloomberg reported that in December 2017, David Rowland paid off a £1.5 million loan that Andrew had been granted by Banque Havilland.

Jonathan Rowland, 46, was Banque Havilland’s chief executive between 2009 and 2013 before co-founding JGOO in July 2017.

JGOO would then charge a ‘small percentage of the transaction’.

A company insider claimed that in July 2019, JGOO expected to land a contract with Buckingham Palace, allowing Chinese tourists to use their phones to buy entry tickets and mementoes from the gift shop.

‘We were told that we were going to win this contract because of the Duke of York,’ they added. 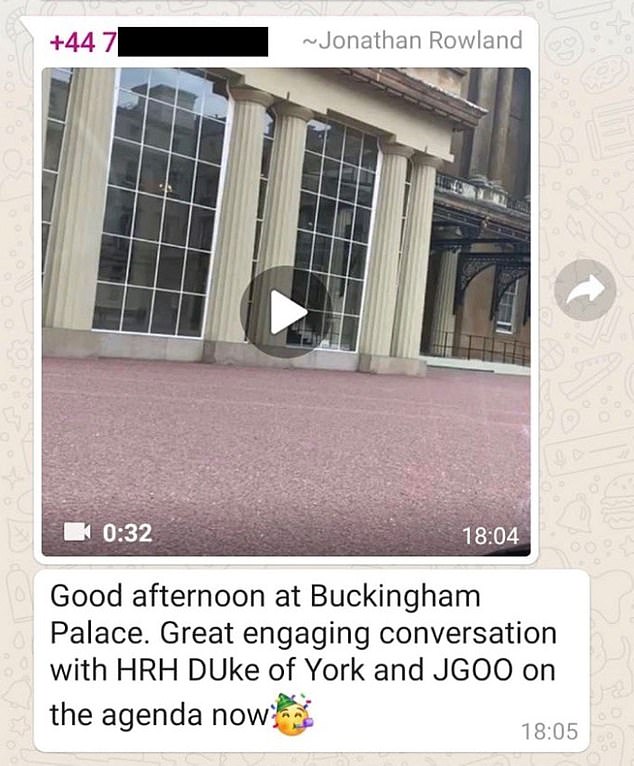 Jonathan Rowland’s WhatsApp message about visit to Buckingham Palace. He sent staff at his company JGOO an extraordinary video recorded from within the Palace’s gates

‘The Duke and Jonathan Rowland obviously had a good relationship and it had come about because of that.’

On July 9, Jonathan Rowland sent the WhatsApp message to JGOO staff, while the accompanying video appeared to show him driving out of the Palace after the meeting.

A deal between the Palace and JGOO was never agreed. Despite this, the MoS has seen a document entitled ‘JGOO’s existing client list’, which includes Buckingham Palace.

Jonathan Rowland denied discussing JGOO with Prince Andrew at the Palace, adding ‘no discussion with the Duke of York took place around commercial terms’.

He said JGOO did have a discussion with the Royal Collection Trust, which manages the summer opening of Buckingham Palace to tourists and its gift shop, although he did not attend.

He said he had not seen the client list document and did not recognise the description of the video, adding: ‘I don’t know what you are referring to. I have been to Buckingham Palace many times.’