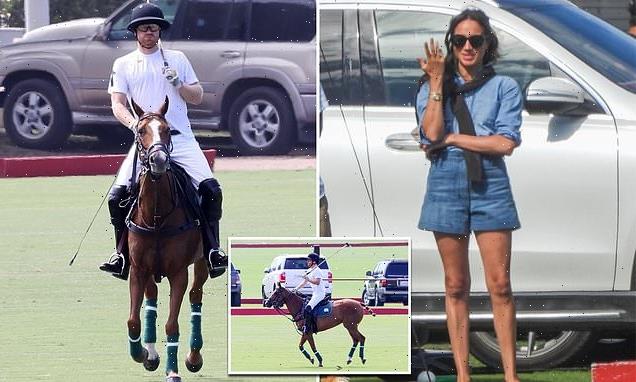 Back on his high horse! Double-denim clad Meghan Markle watches from sidelines as Prince Harry plays polo with his Los Padres team in Santa Barbara, but loses game and place in league final

Meghan Markle was cheering her husband on from the sidelines of the polo field on Friday, as Prince Harry’s team battled in vain for a place in their league final.

Casually dressed in a denim shirt and shorts, with flat Grecian-style leather sandals, the Duchess of Sussex watched the match intently.

She appeared animated as she followed the game, lemonade in hand.

The prince, 37, joined the Los Padres polo team in May under the name Harry Wales, and has spent the last few weeks playing alongside his teammates.

The team, which competes in the Pacific Coast Circuit Inter-Circuit Cup, was founded by Nacho Figueras, 45, an Argentine polo professional and model, and longtime friend of the prince. 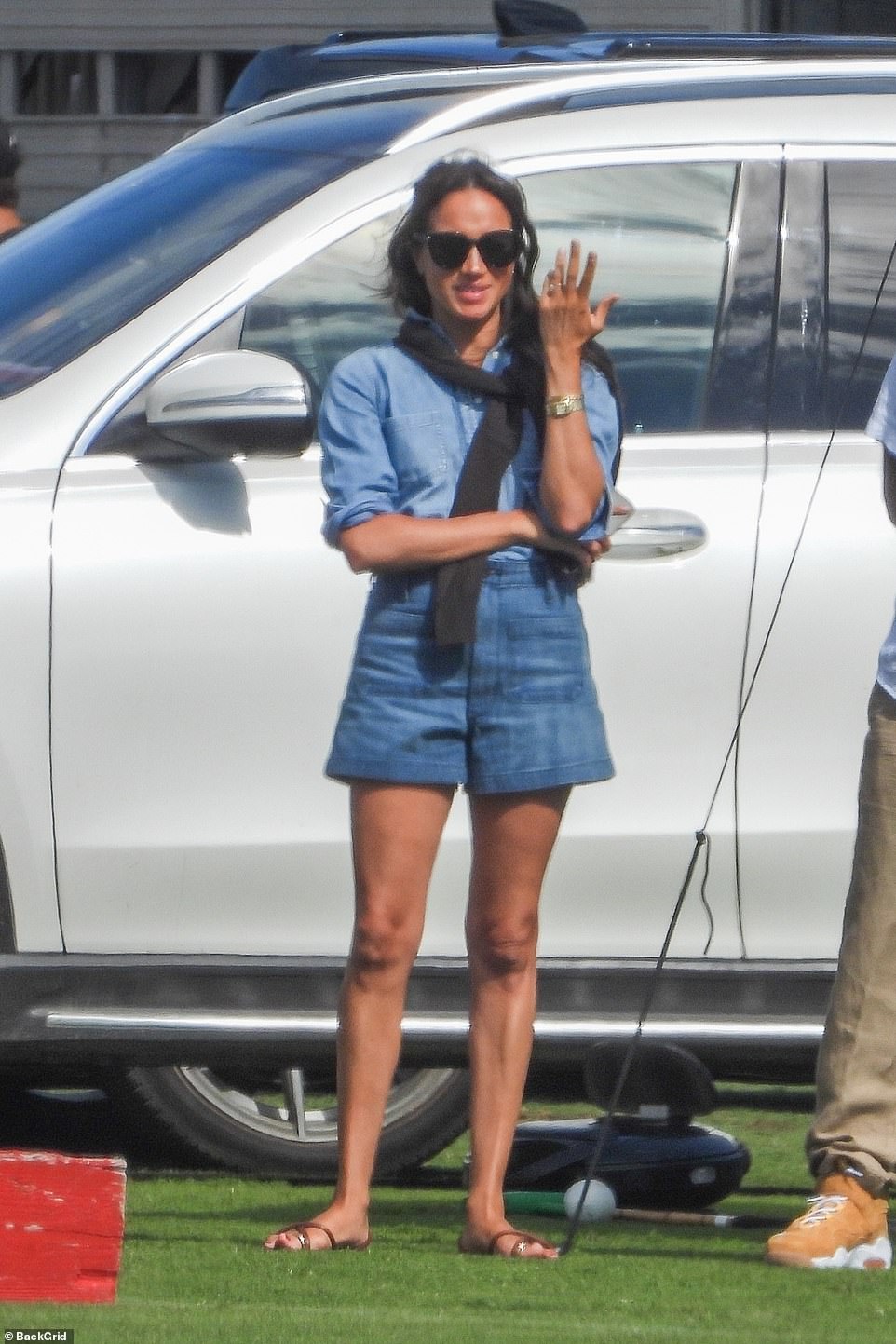 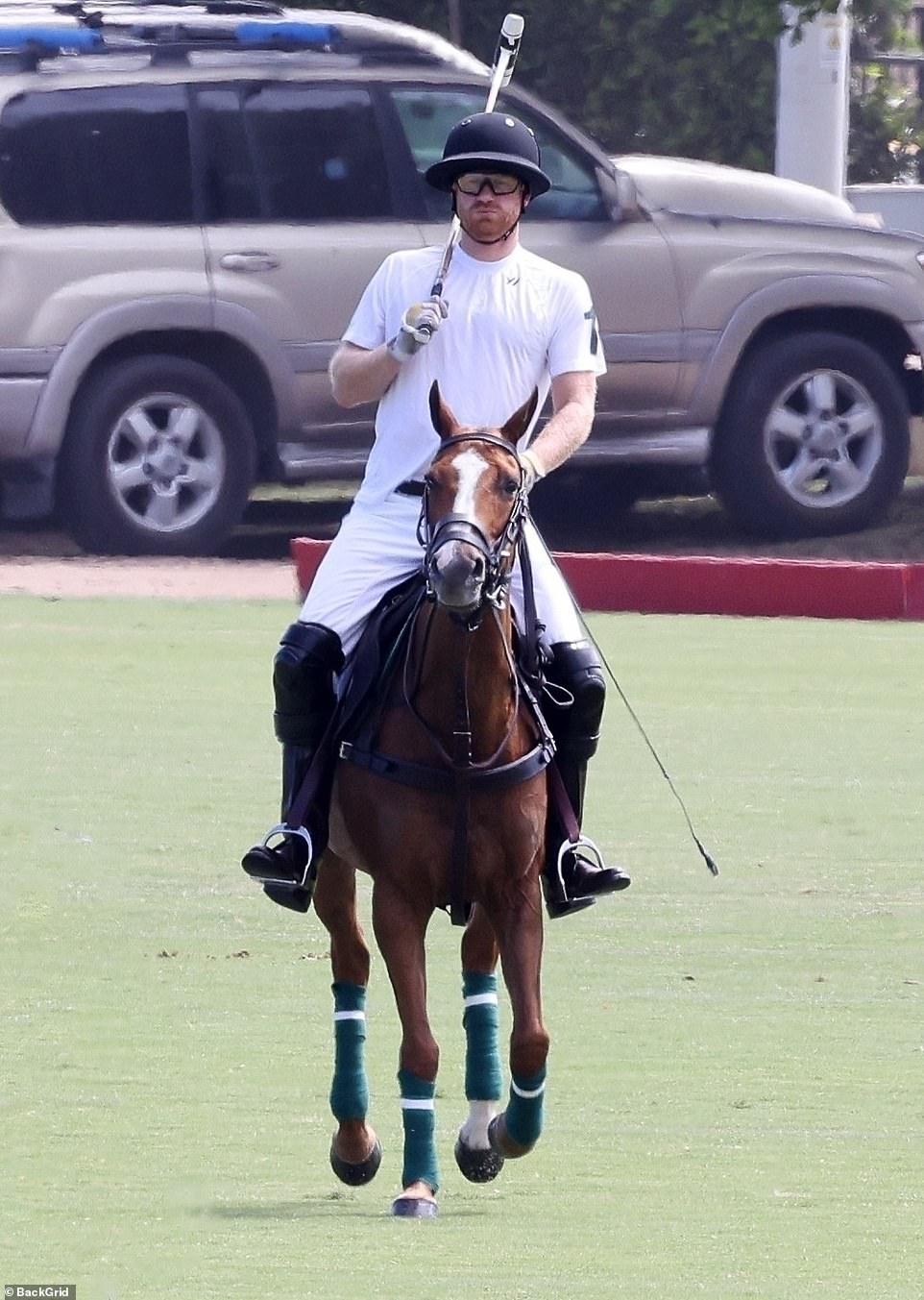 Harry, 37, has been playing since May with the Los Padres polo team, only a few miles from his Montecito home 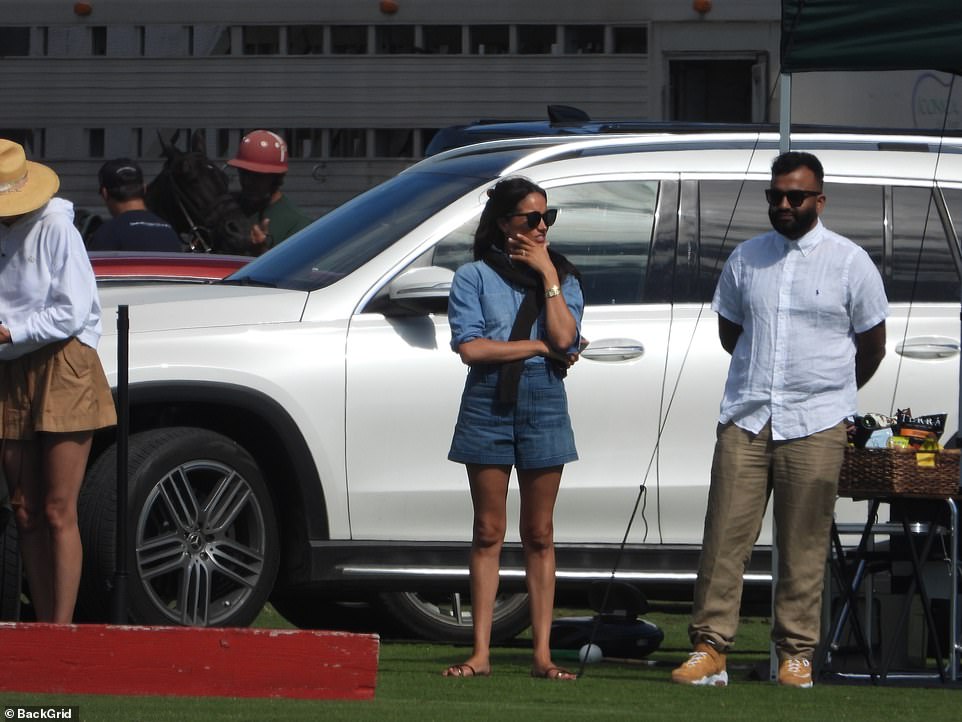 The Duchess of Sussex was accompanied by a barefooted Delfina Blaquier, wife of Harry’s teammate Nacho Figueras 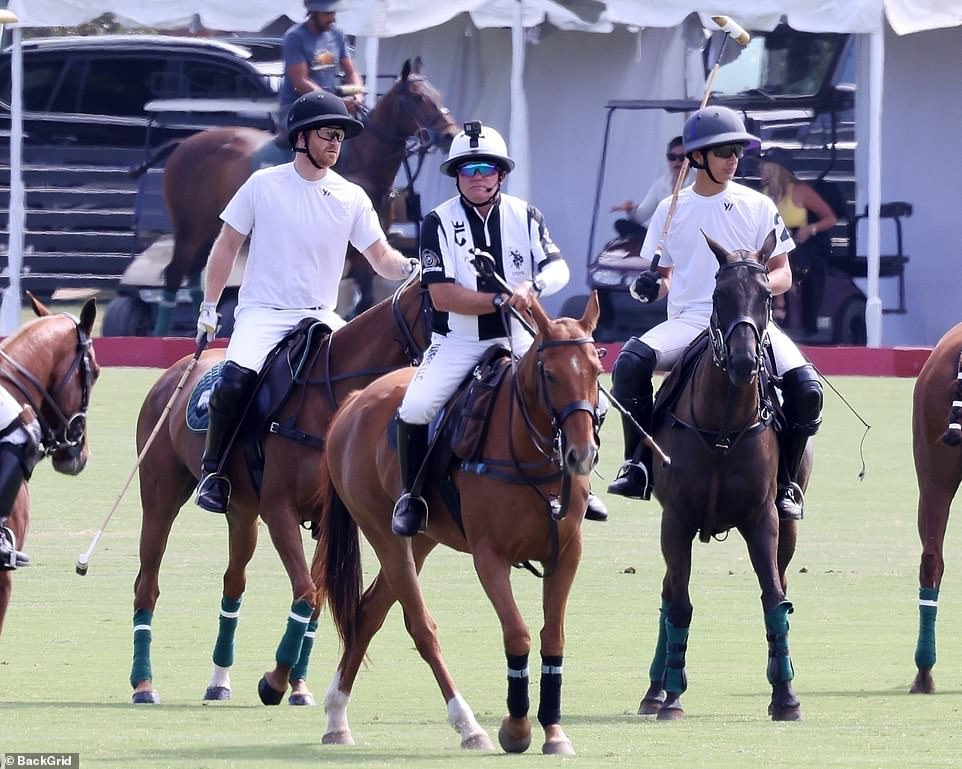 Harry is seen in action on Friday, as Los Padres tried to reach Sunday’s league final 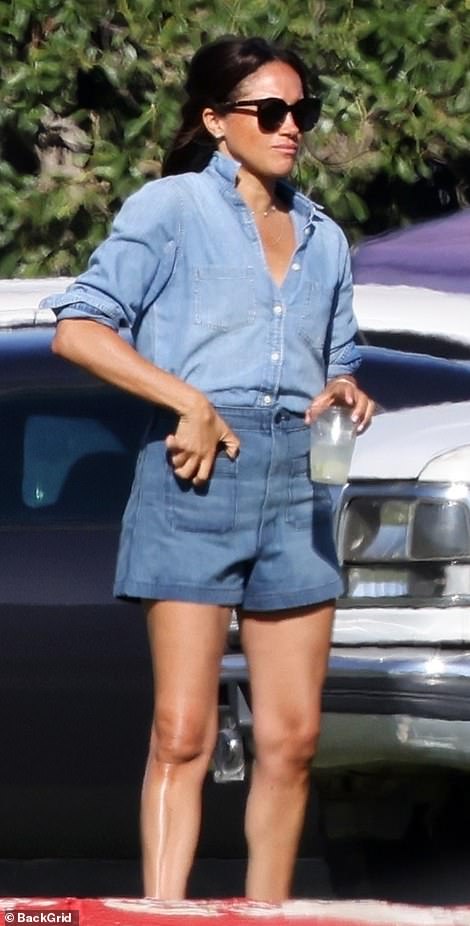 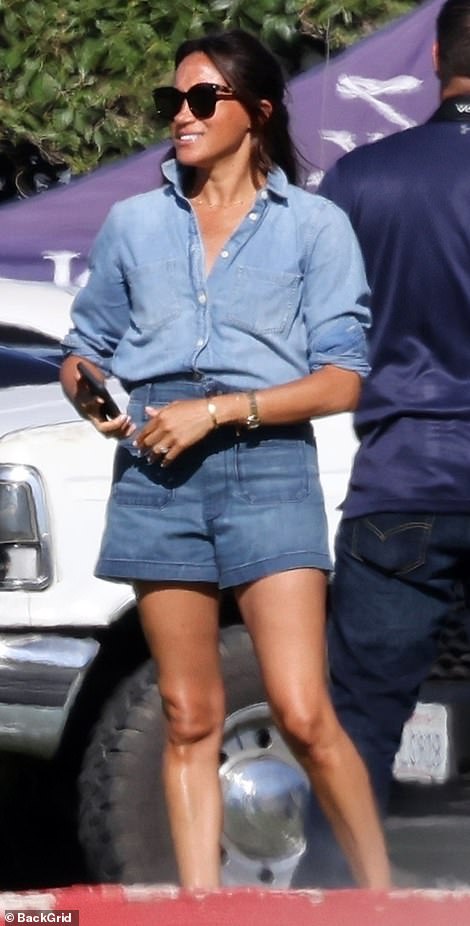 Markle held her phone in one hand, and what looked like a lemonade in the other

Figueras, who has a handicap of five – out of a maximum of 10 – is the most experienced player in the team.

Harry’s handicap is one.

The pair are accompanied by two 16-year-olds, Keko Magrini, on a handicap of four, and Juan Guerrero, a two-goal player.

Meghan, 40, was cheering on the chukkas from the sidelines, besides Figueras’s wife Delfina Blaquier.

During intervals, she and Harry sat together under an awning.

She was also seen hugging Figueras.

Harry’s team was playing in the semi-final, against the Folded Hills team.

They were hoping to win through to Sunday’s final, but ultimately lost the match. 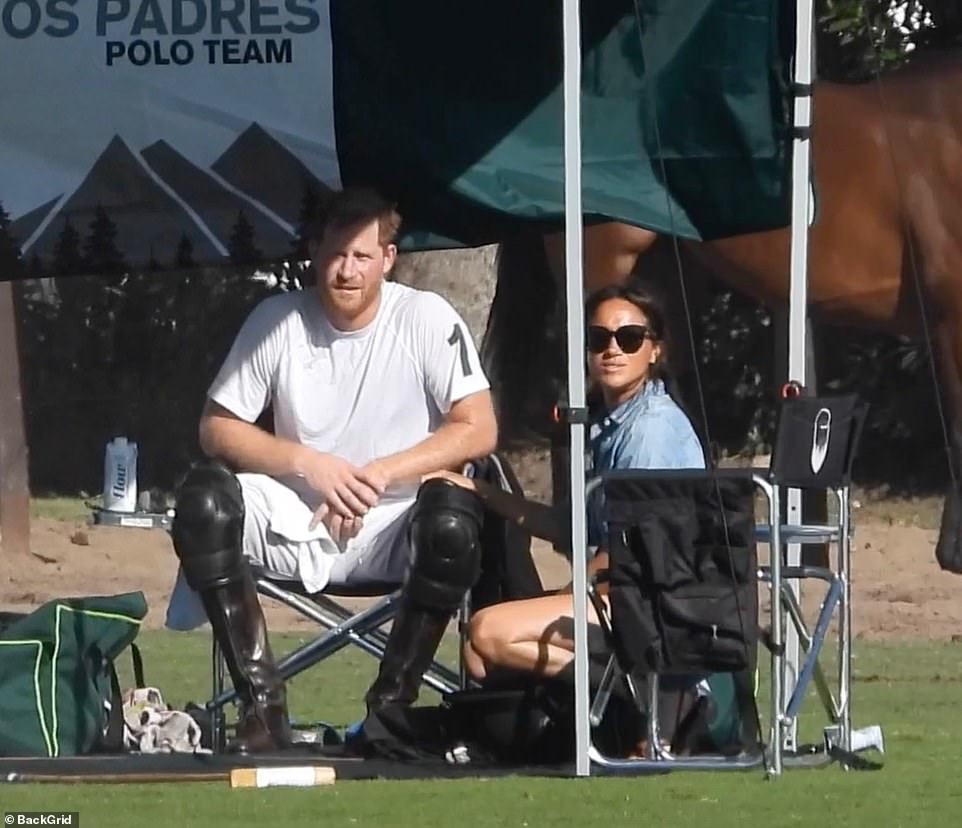 During intervals in the game, Meghan and Harry sought shade under an awning, Meghan crouching down and resting her hand on his knee 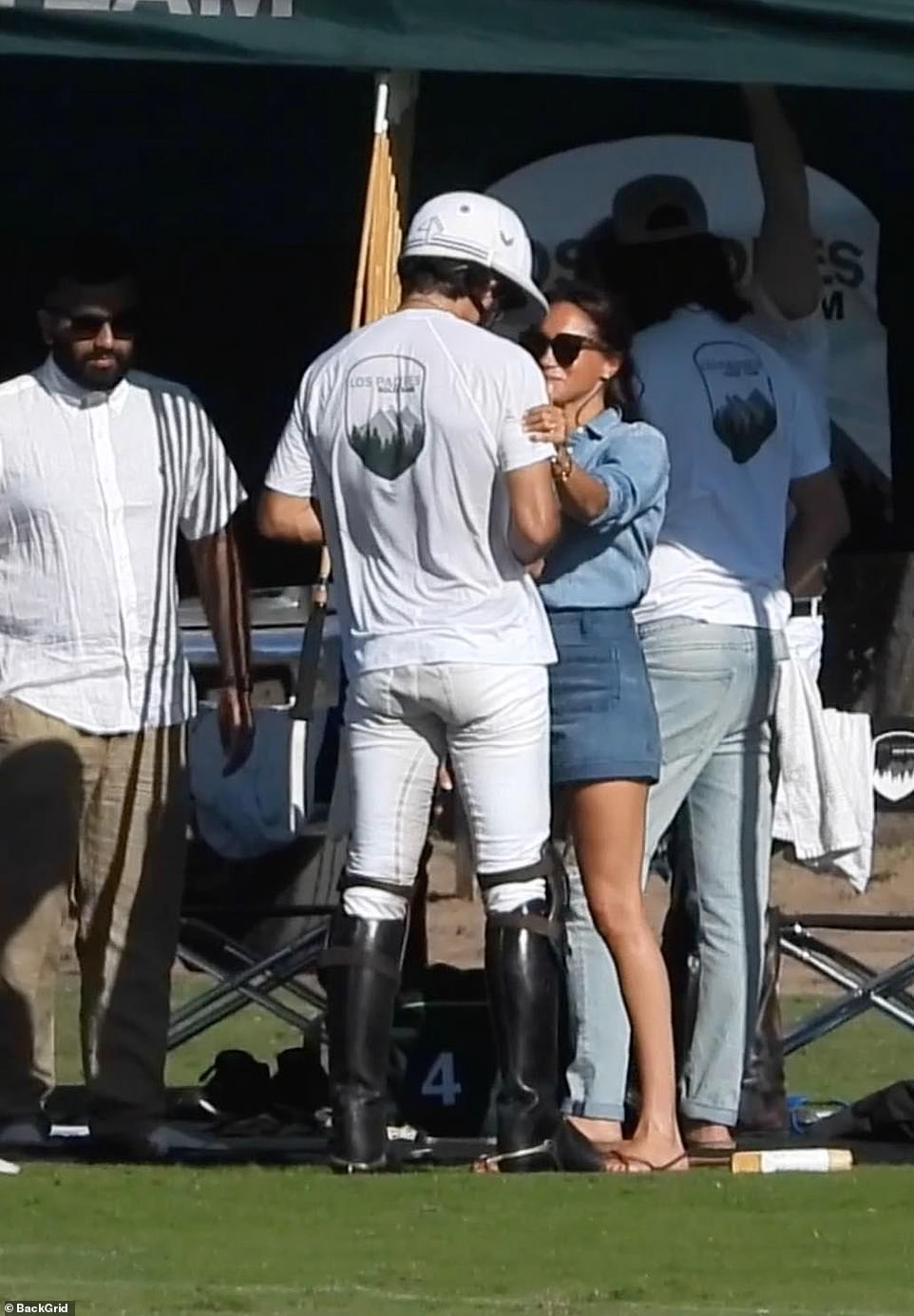 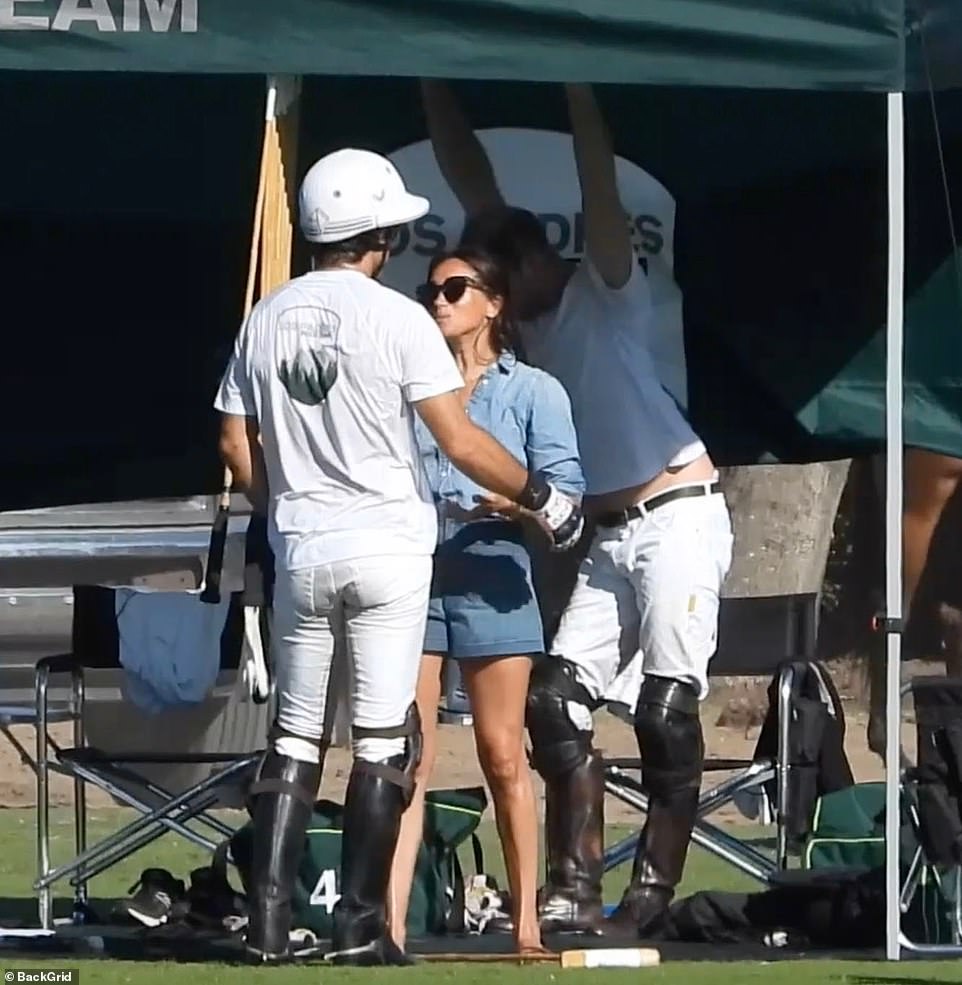 Meghan and Figueras appeared to be in an animated discussion, as Harry stretched behind 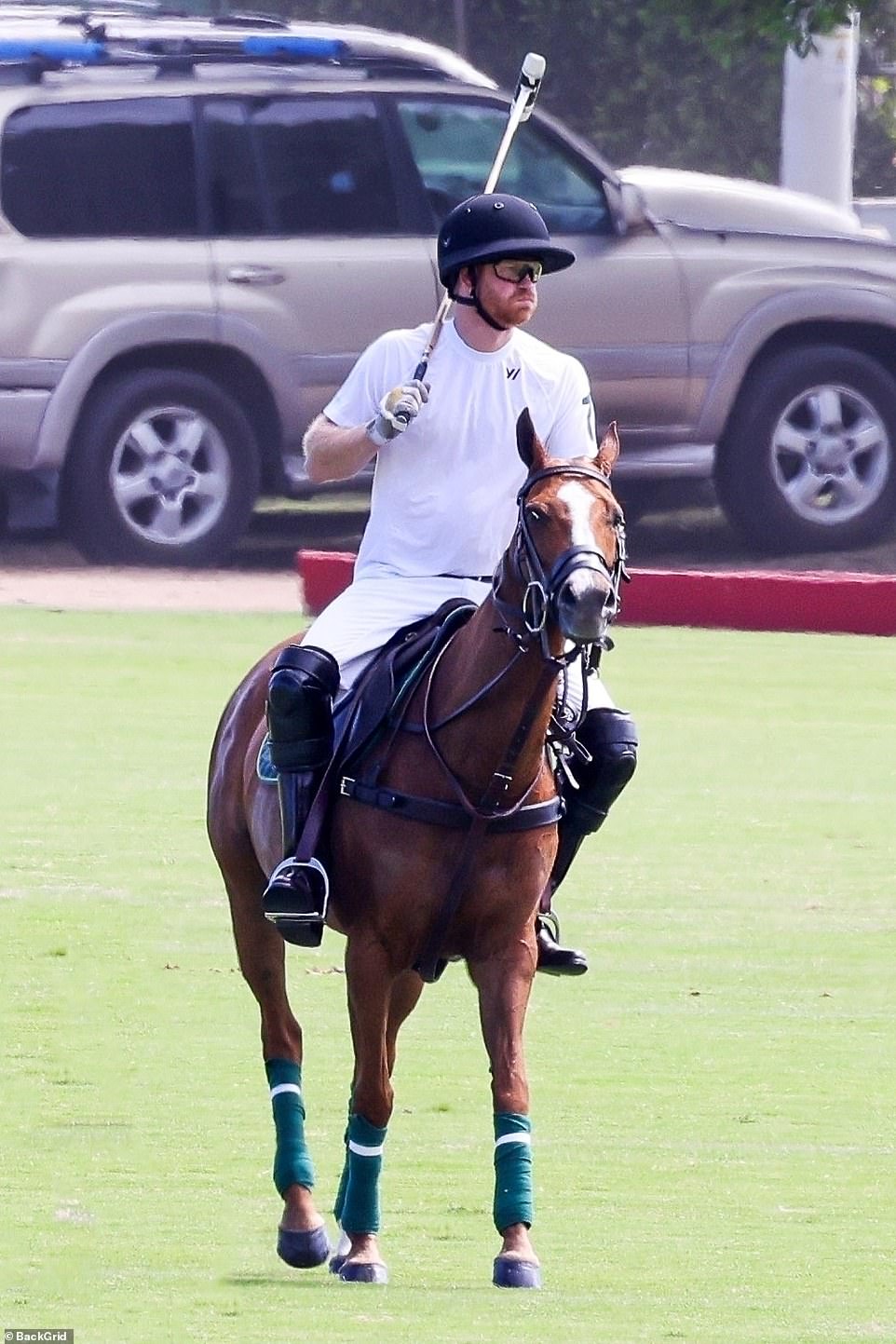 Harry is seen on his chestnut pony on Friday, with the green bandages for Los Padres’s colors 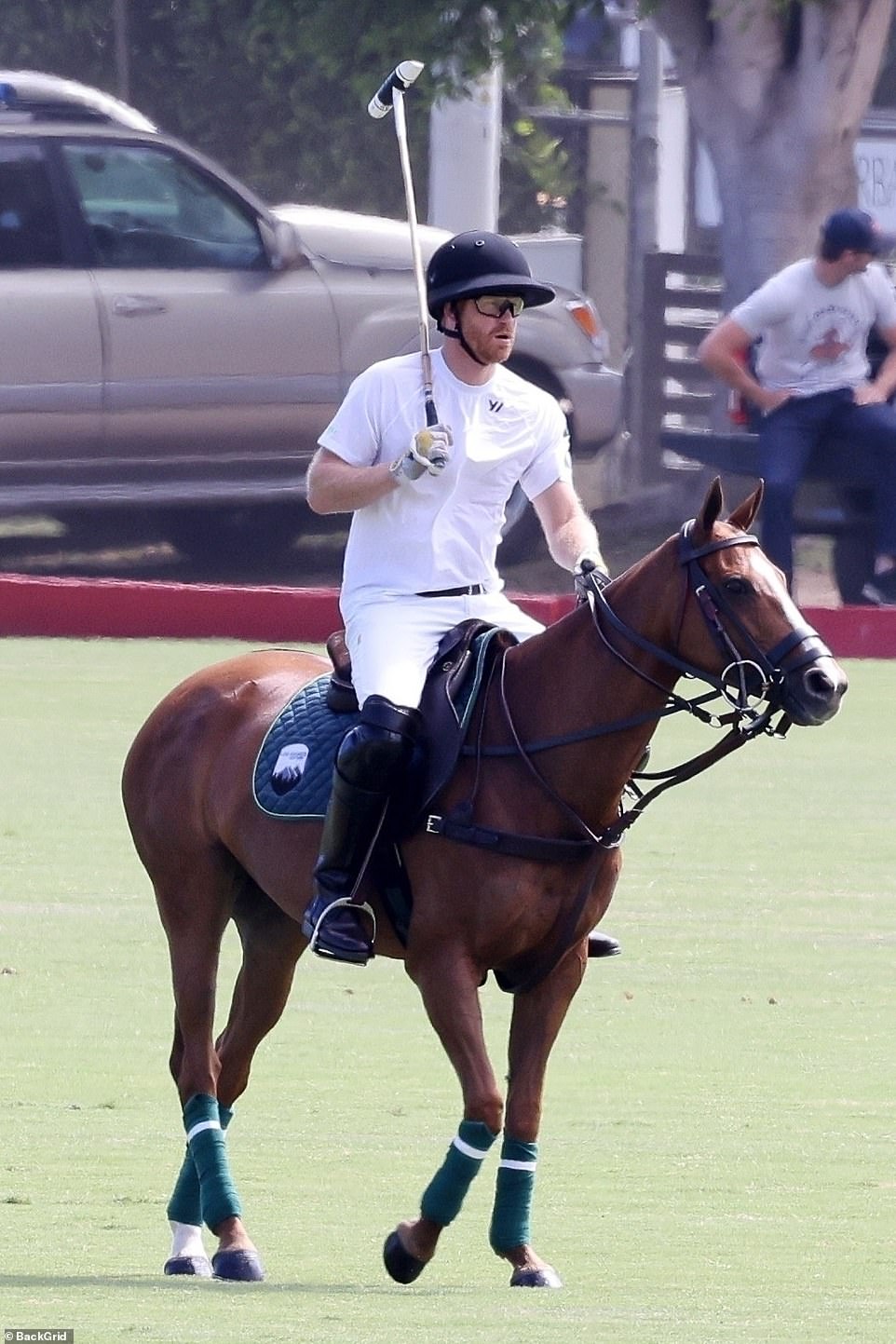 The 37-year-old has been playing polo since he was a boy, following in the footsteps of his father and older brother 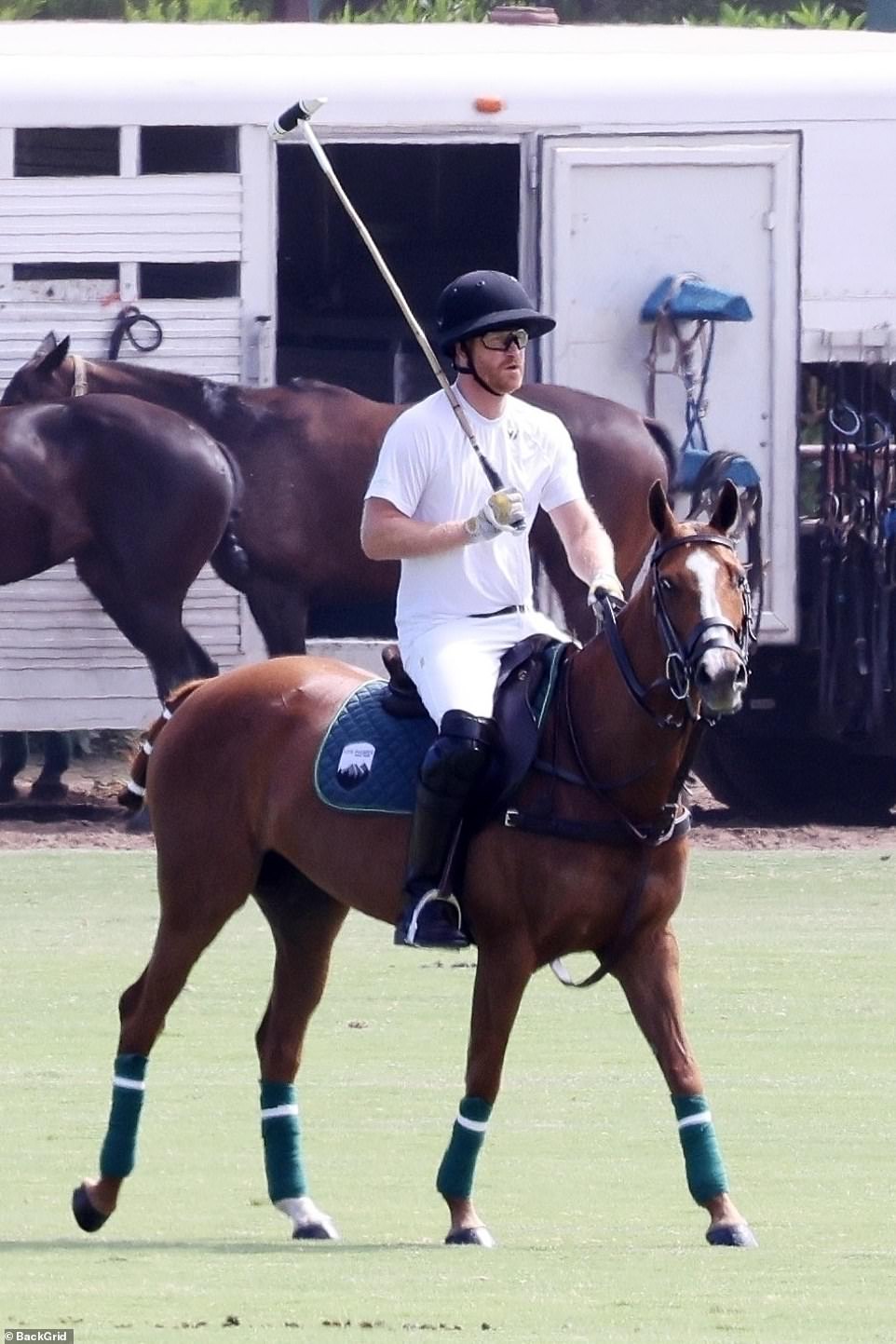 Harry looked pensive as he mounted his pony for another chukka 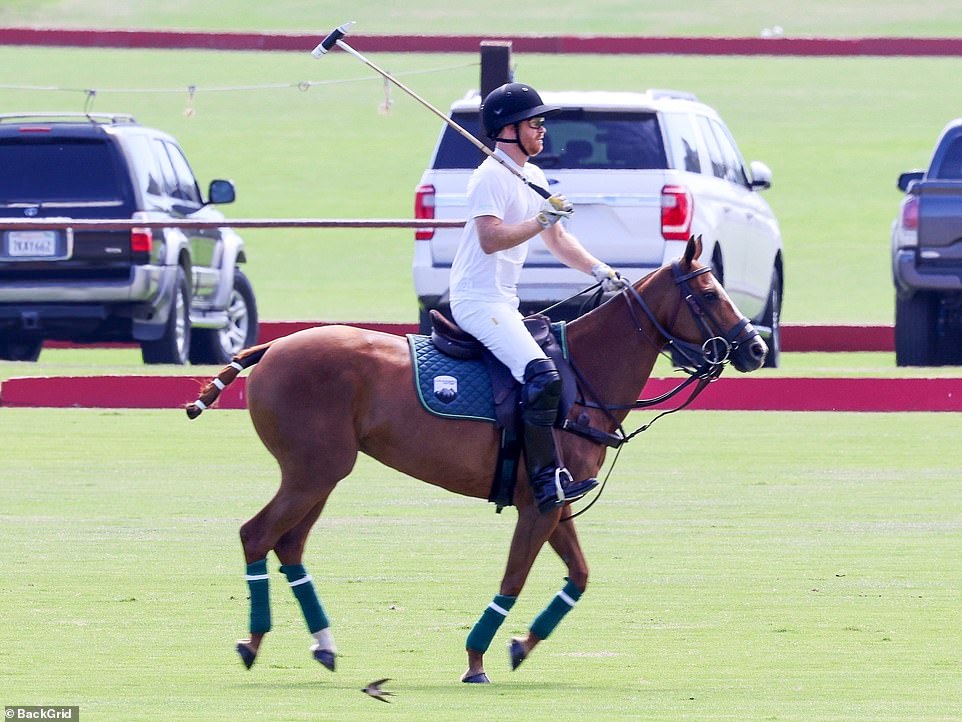 The prince is a skilled horseman, and has been riding since he was a boy 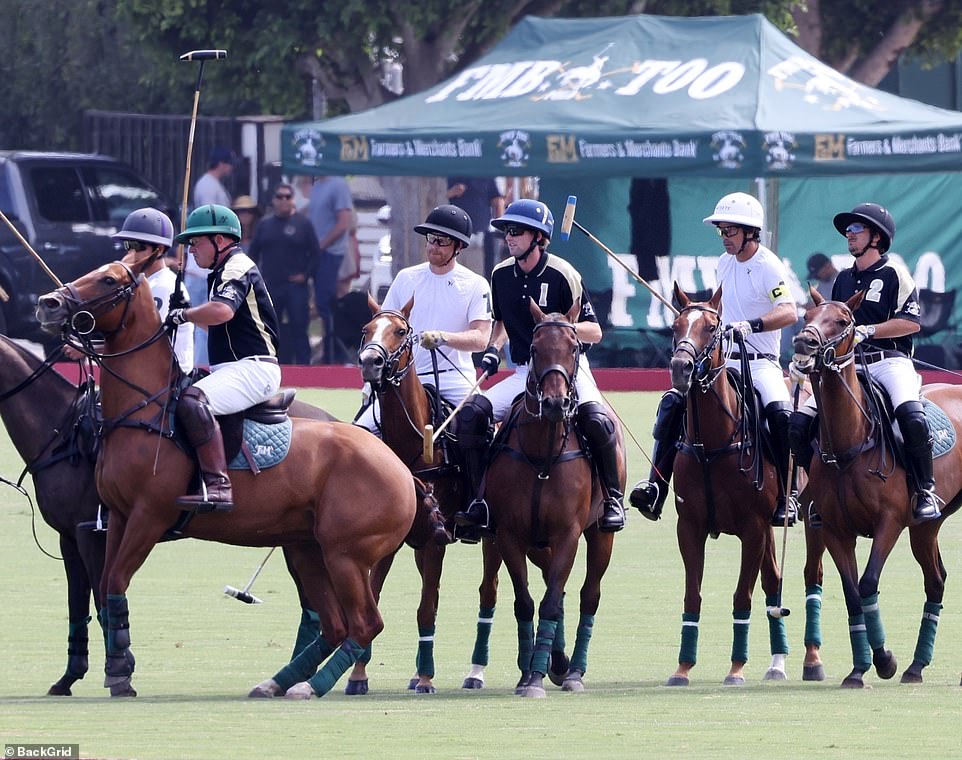 Harry is seen wearing the white number one shirt, with Figueras to his left

The loss was the end of a frustrating week for the prince, who on Sunday, in the quarterfinals, fell from his pony in front of celebrity friends who came to the grounds to cheer him on.

Harry was unscathed in the incident at the Santa Barbara Polo and Racquet Club, as was his ride.

He didn’t appear too downcast by the result, because he was seen hanging out with friends on the sidelines including American idol runner up Katharine McPhee, 38, her composer husband David Foster, 72, and their young son Rennie.

Foster, who is just a year younger than Prince Charles, has been described by some as a ‘father figure’ to Harry.

Charles was also well known for falling off his horse in polo – breaking his arm on occasion.

In New Zealand Charles tumbled from his ride three times in six weeks.

In 2000 he was taken to hospital in Cirencester and forced to stay the night after a fall during a charity match in the Cotswolds when his sons, then 19 and 16, were on his team.