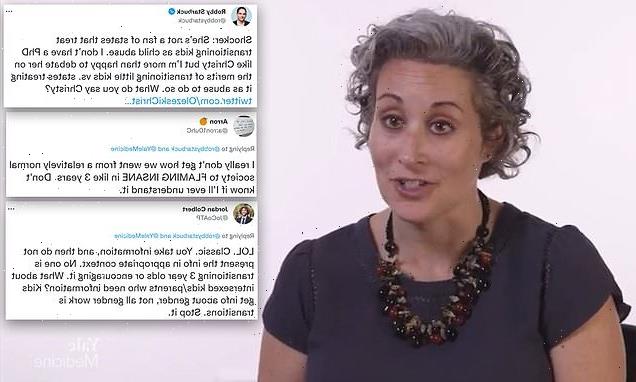 A Yale professor has sparked fury for proudly shating she was part of a program that helps children as young as three with their ‘gender journey’.

Christy Olezeski, director and co-founder of the Yale Pediatric Gender Program, said her team offers advice on if and when youngsters should seek ‘medical intervention’.

She later bragged in the clip – which was posted on Yale Medicine’s YouTube page – that she ‘loves’ what she does.

The video sparked outrage online as she was warned to leave the children alone and others even claimed it was child abuse. 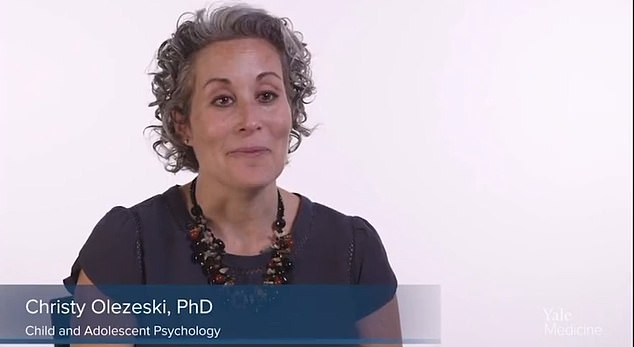 In the footage, Olezeski told how her mission was to ‘provide comprehensive family-centered care for children, adolescents and young adults questioning their assigned gender and/or seeking gender-affirming consultation.’ 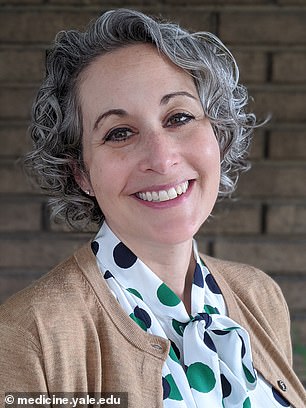 In a YouTube video, since taken down, Dr. Olezeski explains how she runs a program that helps children from the age of three-years-old with their ‘gender journey’

She says: ‘I am the director of the Yale gender program, which is an interdisciplinary program working with gender-expansive individuals [ages] 3 to 25 and their families.

‘We help individuals who are questioning their gender identity or who identify as transgender or non-binary, and we help them with their gender journey.’

The program website details how transgender surgeries are only available to those aged 18 and older.

There is no information as to how young hormones and puberty blockers may be introduced.

She also states how the program she heads provides guidance on ‘medical intervention’ and when such a process should start.

‘I love what I do so it’s really, really wonderful to be working in this field and to be working with individuals who are gender diverse and gaining their support and helping them on their gender journeys.’ 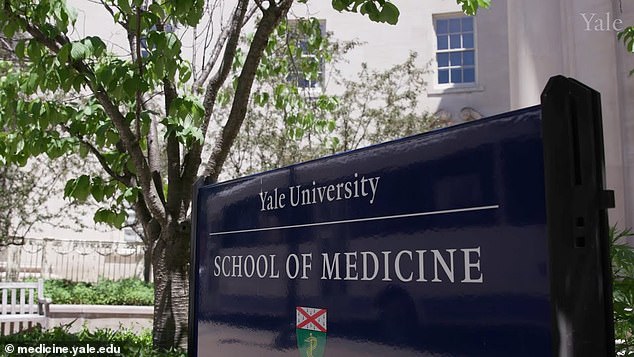 The idea of children who are barely out of wearing diapers making a decision to change genders was met with outrage on social media.

‘3 YEAR OLDS should not be led to change genders! Leave them alone,’ director and producer Robby Starbuck tweeted.

‘Kid’s memories are just starting to work at 3. Kids think they’re dinosaurs or a dog. There is no ‘gender journey’ at 3, this is child abuse,’ suggested the Hodge Twins comedy duo on Twitter.

‘I really want Christy olezeski to tell me how a 3 year old can have a gender identity crisis. Kids that young have no clue or even think about that whens the last time you heard a 3 year old say I’m a girl but feel like a boy or whatever,’ wrote Pat Cordia.

‘Does this Yale Gender Programme Clinical Psychologist’s starry-eyed happiness about working with 3year olds worry others as much as it worries me? What does actual Psychology have to say about this?’ added another Twitter user.

DailyMail.com has reached out to Dr Olezeski for comment on her program. 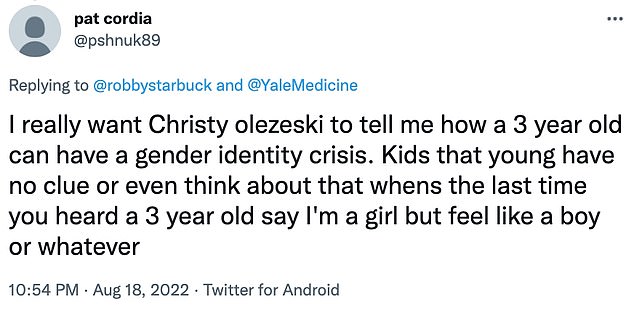 A Boston hospital that prides itself on being ‘home to the first pediatric and adolescent transgender health program in the US’ says it’s faced threats and false claims.

Boston Children’s Hospital is on the defense over its Gender Multispecialty Service Program, or GeMS, which it claims provides gender-affirming care to ‘eligible adolescents and young adults’.

The hospital has been accused, it says falsely, of performing hysterectomies to underage children as part of that care.

Much of the controversy stems from an allegation on right wing social media sensation LibsofTikTok – who was doxed as Brooklyn real estate agent Chaya Raichik – that the hospital offered such treatment, in a still public tweet.

The claims are based off of videos from the hospital’s YouTube account that discusses medical care provided to transgender patients. The video has since been removed.

The story gained traction among activists critical of gender affirming care for underage kids, even going as far as former advisor to President Trump Stephen Miller, who called it ‘monstrous’.

Podcaster David J. Harris called one of the videos ‘pure evil’ and made the claim of underage hysterectomies.

Activists Christopher Rufo and Matt Walsh also slammed the hospital, with Walsh saying: ‘Every sane and decent human being in the country must unite against it’.

Posters on right wing message boards have even allegedly called for the doctors to be ‘executed’ and to call the hospital on the phone, according to Vice.

Boston Children’s told DailyMail.com in a statement: ‘The commentary and the online attention that followed was based on the incorrect statement that Boston Children’s performs genital surgeries on minors in connection with transgender care’. 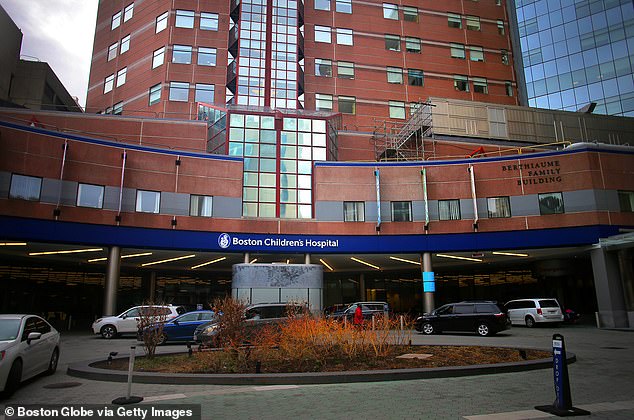 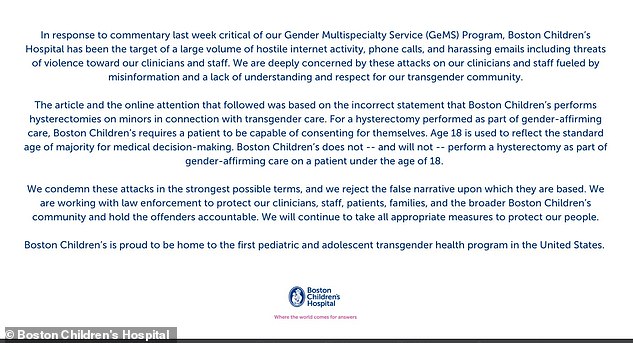 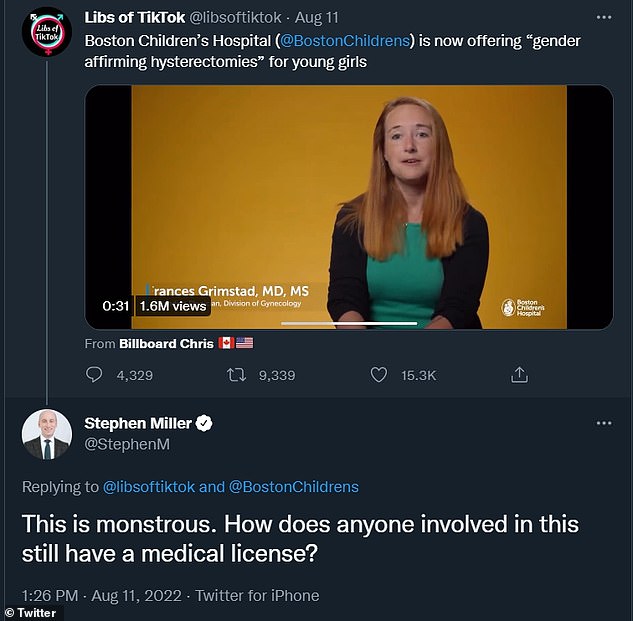 ‘For hysterectomies and other genital surgeries performed as part of gender-affirming care, Boston Children’s requires a patient to be capable of consenting for themselves. Age 18 is used to reflect the standard age of majority for medical decision-making. Boston Children’s does not perform genital surgeries as part of gender-affirming care on a patient under the age of 18.’

Multiple fact-checkers, including PolitiFact and Lead Stories, both debunked the idea that they perform hysterectomies on children.

Miller at one point asked: ‘How does anyone involved in this still have a medical license?’

The video, however, does not suggest the procedures are available to underage patients.

An employee confirmed to NBC News that the hospital sent an email to employees that would direct them on how to respond to such threats. 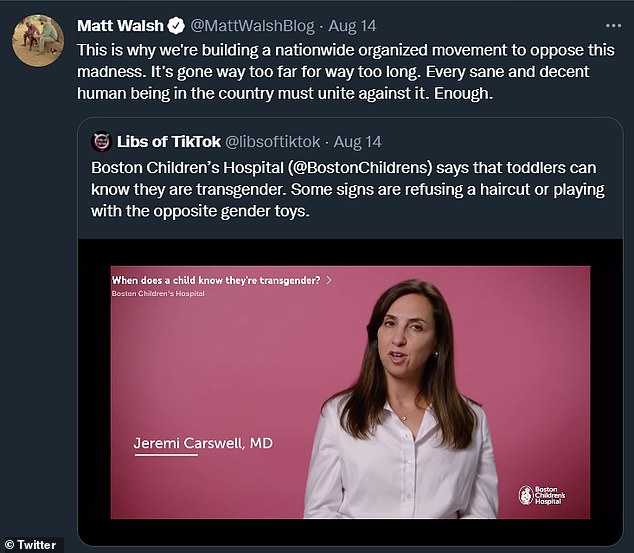 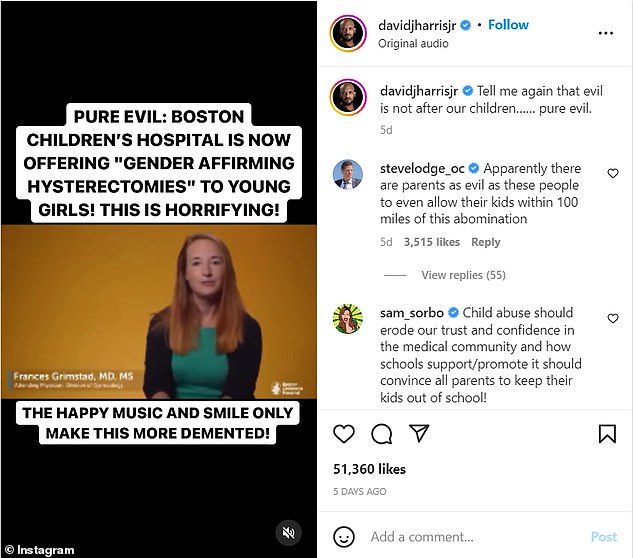 The hospital’s statement continues: ‘We are deeply concerned by these attacks on our clinicians and staff fueled by misinformation and a lack of understanding and respect for our transgender community.’

Libs of TikTok eventually claimed that the hospital’s denial was a lie and said that they had materials allowing girls to get surgeries as young as 17 in a Substack post.

The account wrote: ‘Although I never mentioned a specific age, Boston Children’s does in fact provide ‘gender-affirming’ surgeries for minors. After the videos went viral, they quietly updated their website. They changed the age of requirement for a vaginoplasty from 17 to 18 and added ‘we only perform gender-affirming hysterectomies on patients who are age 18 or older.’

The hospital responded to Raichik’s allegations with a statement to DailyMail.com: ‘For surgical consultation, you must be 17 years of age and between 18 and 35 years of age at the time of surgery. We have since updated this to reflect the protocols for the practice, which we have always adhered to (no surgery under 18 years of age)’.

They added that Boston Children’s ‘requires’ a patient to be capable of consent and the laws state that 18 years old is the standard age.

Trans activists have said that Boston Children’s has been targeted in the past, with Lee Leveille of Health Liberation Now saying they were targeted for harassment in 2021 for providing ‘gender-affirming care’.

Alejandra Caraballo, a clinical instructor at the Harvard Law School Cyberlaw Clinic, also called the treatment of the hospital ‘an absolute torrent of abuse’.

The FBI said it thwarted a planned cyberattack on Boston Children’s in by hackers working for the Iranian government earlier this year.

The hospital itself says it remains ‘proud’ to be the only hospital in the country providing this kind of care.