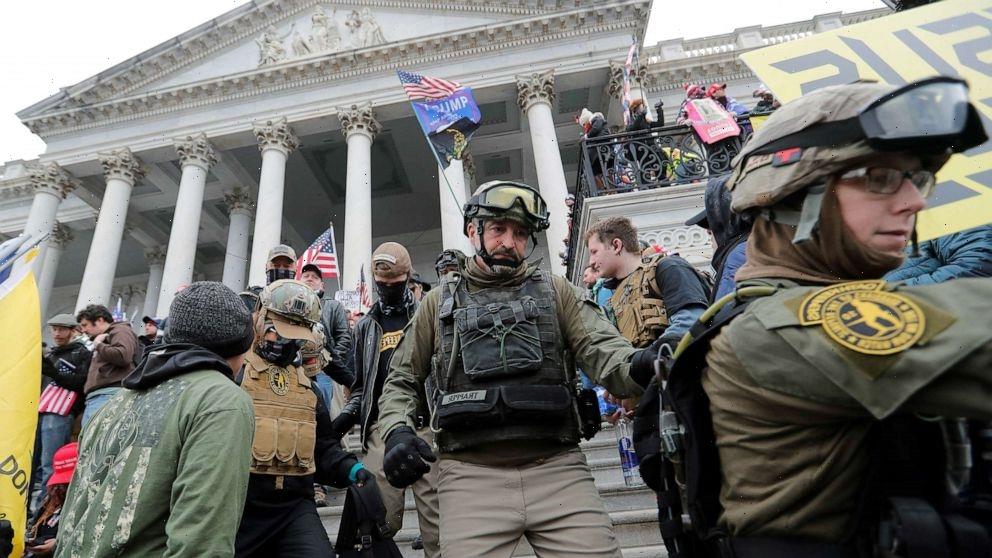 Federal prosecutors have begun “informal plea negotiations” with most of the self-described Oath Keepers militia members charged in a sweeping conspiracy case involving the Jan. 6 insurrection, a prosecutor said during a hearing in the case Tuesday.

Government attorneys have started to discuss the parameters of what plea offers for the accused Oath Keepers might look like, the prosecutor said, adding that while those discussions remain informal and “preliminary at this time,” the government hopes to offer formal plea deals “over the next month or two.”

The development came just one day after the government indicted four new individuals, bringing to 16 the number of accused Oath Keepers facing charges in the case, which range from conspiracy and obstruction to civil disorder and assaulting officers. Joseph Hackett, Jason Dolan, William Isaacs, and another person whose name was redacted from the filing were added through a superseding indictment.

The case alleges coordination between some of the rioters who participated in the Jan. 6 attack on the Capitol, and plea deals would mark a significant step forward in the government’s investigation. In total, nearly 20 self-described Oath Keepers members have been charged in connection with the riot, according to an ABC News analysis of arrest records.

The new indictment adds new details about the alleged communications between Oath Keepers leader Stewart Rhodes and members of the group leading up to the riot. Rhodes has not been charged or accused of wrongdoing in connection with the attack, but prosecutors have repeatedly cited his communications in court filings, referring to him as “Person One.”

Previous legal filings in the investigation have linked Rhodes’ name specifically to communications that prosecutors have subsequently identified as messages allegedly sent by “Person One,” and have also described “Person One” as the Oath Keepers’ leader and founder.

Rhodes is alleged in the indictment to have messaged members of the group as early as Nov. 9, raising the idea of former President Donald Trump taking action to mobilize his followers to help reverse his loss in the 2020 election.

“We’re going to defend the president, the duly elected president, and we call on him to do what needs to be done to save our country,” Rhodes allegedly said, according to the indictment. “Because if you don’t guys, you’re going to be in a bloody, bloody civil war, and a bloody — you can call it an insurrection or you can call it a war or fight.”

In a Jan. 4 post, Rhodes also allegedly made reference to an armed “Quick Reaction Force” stationed outside of Washington, D.C., that could be mobilized in the event that violence erupted in the city or if Trump invoked the Insurrection Act.

“We don’t expect a need for him to call on us for that at this time, but we stand ready if he does (and we also stand ready to answer the call to serve as militia anytime in the future, and anywhere in our nation, if he does invoke the Insurrection Act),” Rhodes allegedly wrote, according to the indictment.

Overall, more than 450 individuals have been charged in connection with the Jan. 6 attack, and in recent weeks a growing number of attorneys have said they are engaged in plea discussions with the government.

Still unclear is what the government’s plea offers might look like, or whether defendants would even accept them. However, prosecutors have said they do expect at least some defendants to plead out.

When District Judge Amit Mehta, in Tuesday’s hearing, raised questions about how a trial with sixteen defendants would proceed, prosecutors responded that those conversations would be “premature” without knowing what’s going to happen with the plea negotiations.

“It would make sense and be prudent to allow the defense counsel the time to continue going through materials, to allow the parties to engage in negotiations and to see where we are in 60 days,” a prosecutor said. “And at that point in time we would be in a much better position to meaningfully discuss trial dates and what those trial dates might look like.”