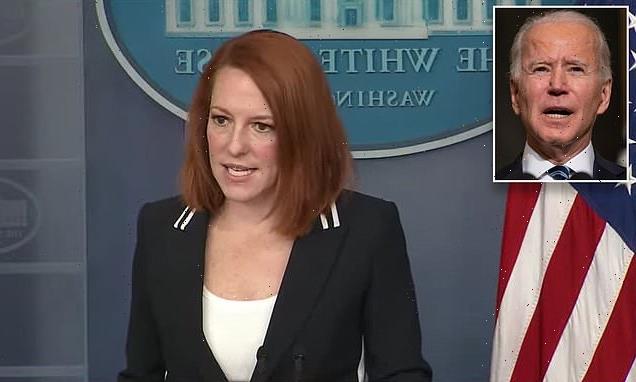 WH Press Secretary Jen Psaki dodges question on Biden’s contribution to ‘systematic racism’ in U.S. during his 30 years as senator and ‘architect of laws that disproportionately jailed blacks’

Jen Psaki dodged a reporter’s question Wednesday and cut him off abruptly when she was asked if President Joe Biden plans to address his role in systemic racism while a senator for more than three decades.

‘To what extent does President Biden acknowledge his own role in systemic racism and how does that inform his current policy positions?’ New York Post reporter Steven Nelson asked Psaki during her briefing Wednesday.

He noted that Biden is ‘an architect of multiple federal laws in the 1980s and 90s that disproportionately jailed black people and contributed to what many people see as systemic racism.’

Instead of noting any of his potential role in exacerbating the issue in the past, Psaki decided to list his steps toward relieving that.

‘One of the president’s core objectives is addressing racial injustice in this country, not just through his rhetoric but through his actions,’ Psaki deflected. ‘And what anyone should look to is his advocacy for passing the George Floyd Justice in Policing Act, for nominating leaders to the Department of Justice to address long outdated policies, and to ask his leadership team here in the White House to prioritize these issues in his presidency, which is current and today and not from 30 years ago.’

The reporter tried to push Psaki on the issued with: ‘Do you believe it’s important for him to accept his own culpability –’

But he was cut off.

‘I think I’ve answered your question,’ Psaki tersely quipped before calling on another reporter to ask a question. 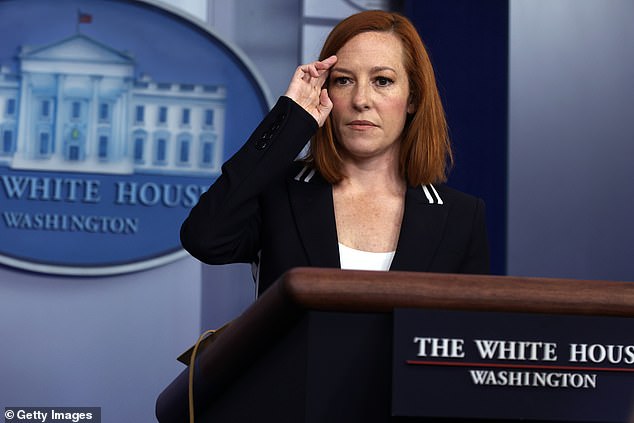 White House Press Secretary Jen Psaki dodged a reporter’s question on Wednesday on if Joe Biden should own up to his role in perpetuating ‘systemic racism’ as a U.S. Senate for 34 years 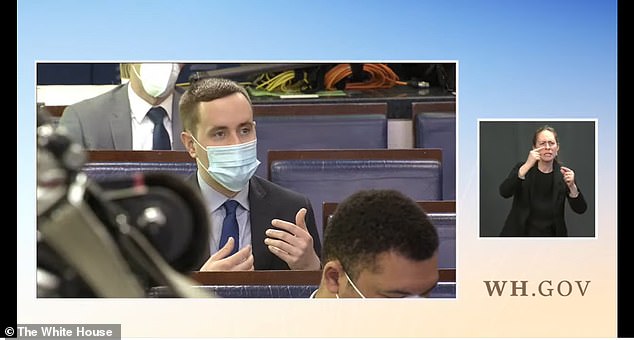 New York Post reporter Steven Nelson tried to push for an answer: ‘Do you believe it’s important for him to accept his own culpability –’ 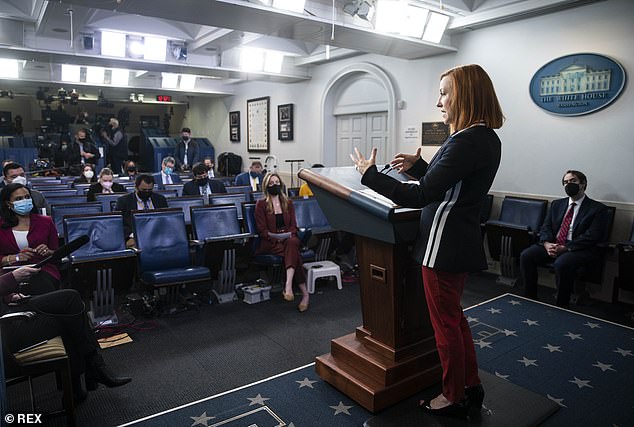 Psaki cut him off saying: ‘I think I’ve answered your question,’ before moving onto another question

The back-and-forth came the day after the jury found former Officer Derek Chauvin guilty of all three charge in the murder of George Floyd during an arrest gone awry last May.

Many civil rights activists lauded the ruling as a major win for black Americans.

During a speech after the jury revealed its verdict on Tuesday, Biden said it had helped ‘rip the blinders off for the whole world to see the systemic racism in the United States.’

The question of Psaki on Wednesday was likely referencing several different policies, but notably in the mid 1970s, Biden was one of the Senate’s biggest opponents of race integration by way of busing.

Biden’s constituents in Delaware harshly opposed the proposal and he called it a ‘bankrupt idea’ that violates ‘the cardinal rule of common sense.’ 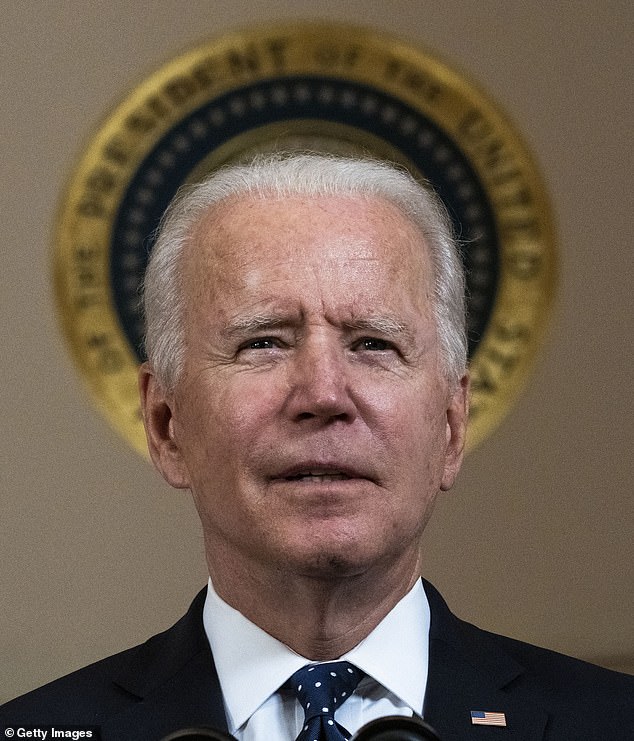 Biden said Tuesday the Derek Chauvin guilty verdict helped ‘rip the blinders off for the whole world to see the systemic racism’, but he supported some policies that contributed to this during his early Senate career

In May 1974, Biden voted to table an anti-busing and anti-desegregation measure until it included a provision that made sure the judiciary’s power to enforce the 5th and 14th Amendment was upheld.

A year later, he supported a bill preventing the Departments of Health, Education and Welfare from cutting federal funds to districts refusing to integrate. As a Democrat opposing the bill, Biden said at the time that it would then be easier for other liberals to follow suit.

Biden and Kamala Harris, who is now his vice president, got into a heated back-and-forth over busing at the Miami Democratic primary debate in June 2019.

In a terse exchange that had her starring down the stage at the 76-year-old senator who represented Delaware, she reminded him that she was a beneficiary of busing.

‘You also worked with them to oppose busing,’ Harris said of Biden and some pro-segregation lawmakers in the 1970s. ‘And, you know, there was a little girl in California who was part of the second class to integrate her public schools, and she was bused to school every day.’

‘And that little girl was me,’ Harris said.

‘So I will tell you that on this subject, it cannot be an intellectual debate among Democrats. We have to take it seriously. We have to act swiftly. As Attorney General of California, I was very proud to put in place a requirement that all my special agents would wear body cameras and keep those cameras on,’ she asserted. 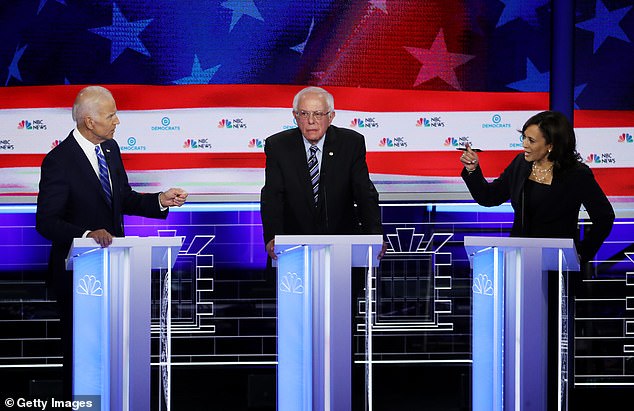 During the June 2019 presidential debate, Kamala Harris, who is now Biden’s VP, got into a heated back-and-forth when she called him out on stage for opposing integrated busing and praising segregationist lawmakers

Harris, who is Jamaican-American, said during that debate where she was still running for president that it was ‘hurtful’ that Biden had praised two notorious, Democratic segregationists who he served with in the Senate in the 1970s.

One, James Eastland, from Mississippi, called African-Americans ‘flesh eaters’; the other, Herman Talmadge, ran for the Senate on a pledge to stop blacks and whites eating together in the Capitol itself.

Biden revealed at a private fundraising event that Eastland ‘didn’t call me boy,’ and said of their time in the Senate: ‘At least there was some civility.’

During the confrontation of the debate state, Harris told Biden, ‘I do not believe you are a racist. And I agree with you, when you commit yourself to the importance of finding common ground.

‘But I also believe – and it’s personal, and I was actually very – it was hurtful, to hear you talk about the reputations of two United States senators who built their reputations and career on the segregation of race in this country,’ she said.