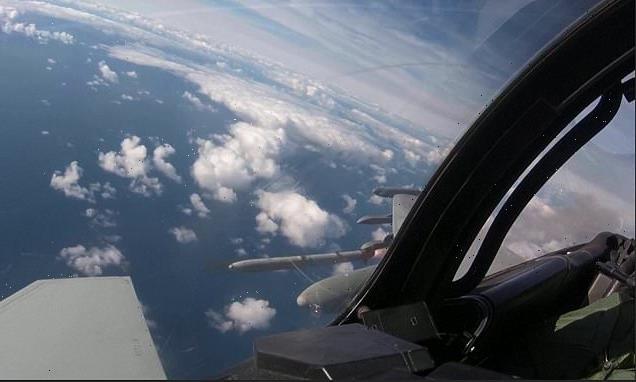 Both Typhoon and F-35B Lighting II jets were involve in the exercise which saw pilots from eight different squadrons launch 53 missiles at target drones.

The RAF were testing out the latest Advanced Short Range Air-to-Air (ASRAAM) missiles at a Missile Practice Camp over the sea in the Hebridies Air Weapon Ranges.

The pilots used the £200,000 missiles to intercept drones approaching the area. According to the RAF it was ‘the largest mass firing of the infra-red guided ASRAAM missiles from Typhoon and F-35B Lightning II’.

The missiles weigh 88kg and are 2.9metres long and have a range in excess of 25km.

One Australian pilot during a previous exercise was able to fire a shot ‘over the shoulder’ to strike a target behind the fighter jet. 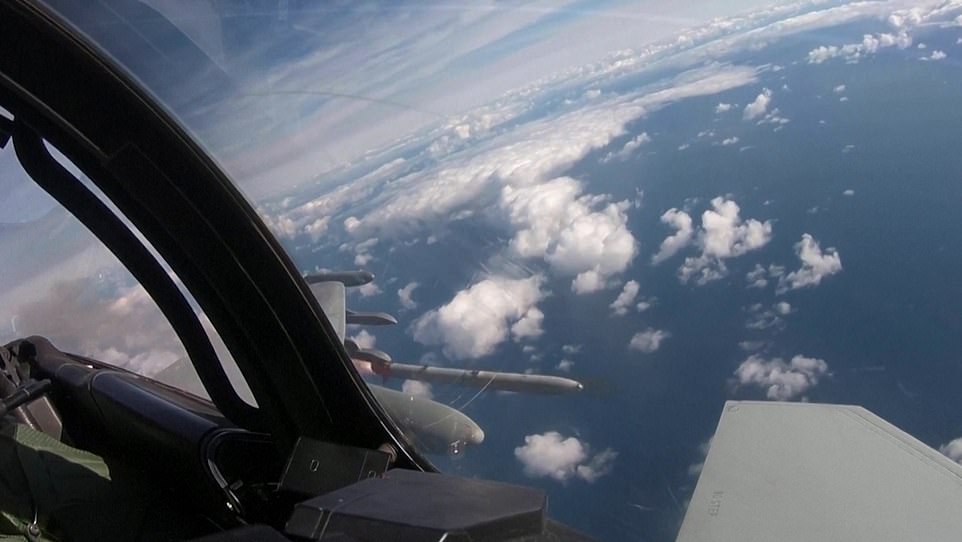 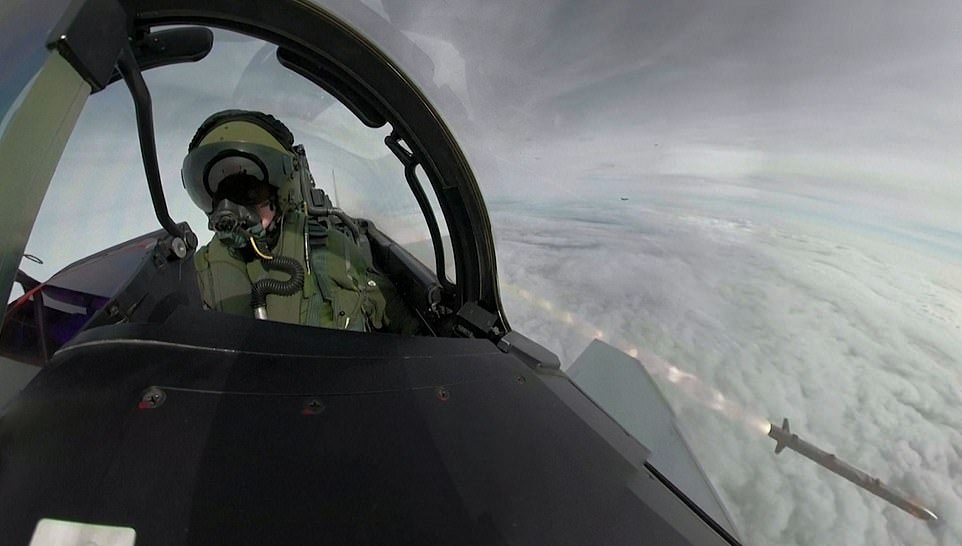 The £200,000 weapon streaked from the hardpoint under the wing of the Typhoon which is normally part of an RAF Quick Reaction Alert squadron tasked with protecting UK airspace from hostile incursions 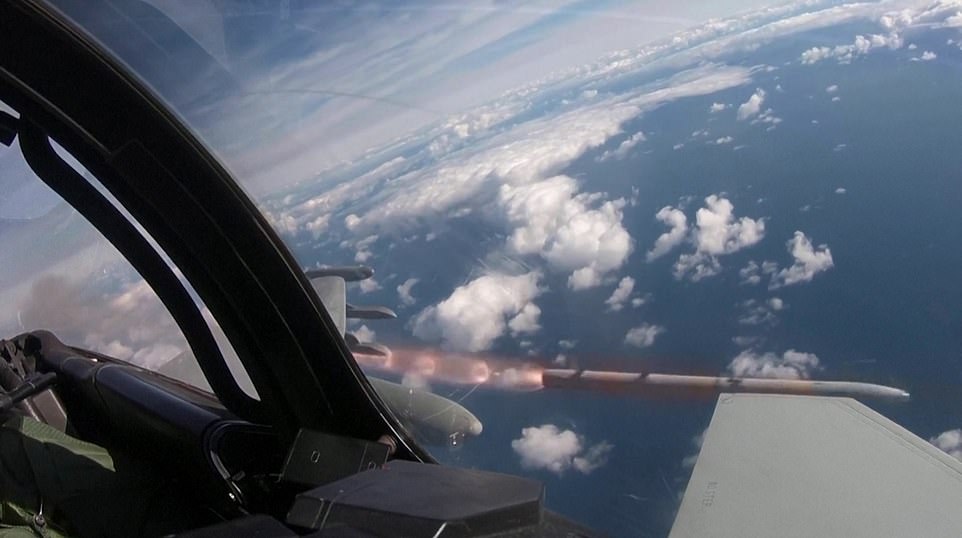 According to MBDA Missile Systems who developed and market the weapon, it is currently in service with the RAF and the Royal Australian Air Force, describing it as the ‘Within Visual Range Dominance Weapon (WVR).

A spokesperson said: ‘In WVR air combat, the ability to strike first is vital. A pilot engaging an enemy needs a missile that reacts more rapidly than ever before with the speed and agility to maximise the probability of a kill, regardless of evasive target manoeuvres or the deployment of countermeasures. ASRAAM has proven this capability.

‘ASRAAM accepts target information via the aircraft sensors, such as the radar or helmet mounted sight but can also act as an autonomous infrared search and track system. The RAAF has demonstrated successful “over the shoulder” firing in Lock On After Launch (LOAL) mode against target drones that were behind the wing-line of the launch aircraft.’

RAF squadrons from Lossiemouth, Conningsby and Marham were all involved in the exercise. 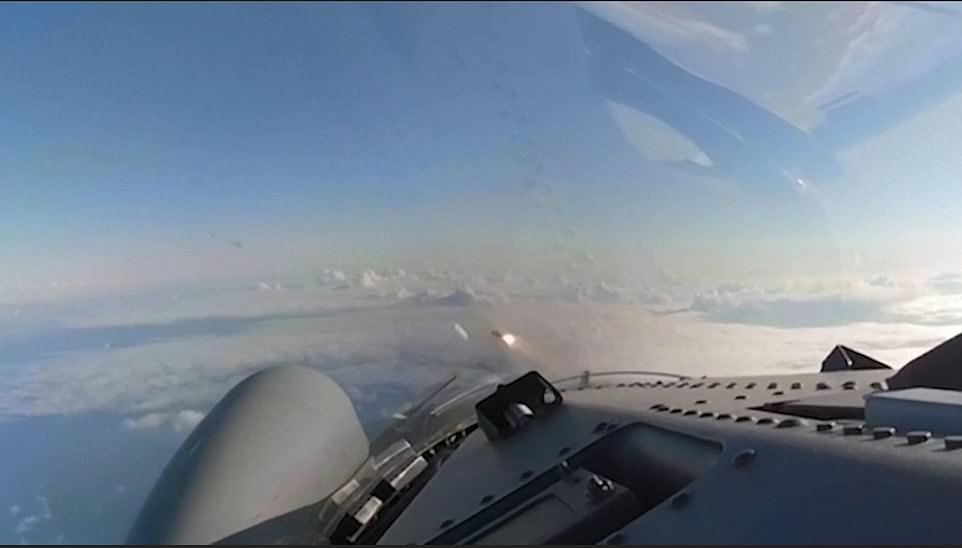 One pilot who participated in the exercise said: ‘It surpassed all expectations of what my first live firing exercise on the Typhoon would be. Selecting the weapon and knowing a live missile would come off the rail was a unique moment; hearing the missile tone and pulling the trigger, followed by a large whoosh sound and a slight wobble of the aircraft was fantastic’

Many of those pilots are either involved in Quick Reaction Alert squadrons who react to incursions by Russian aircraft.

Others will be deployed on the two Royal Navy aircraft carriers HMS Queen Elizabeth and Prince of Wales.

According to the RAF: ‘The ability to end-to-end test these missiles develops confidence in the weapon, whilst simultaneously developing personnel from professions across the RAF. From the movement and loading of live weapons onto the aircraft, to the aircrafts’ transit to the Air Weapons Ranges, the integration of personnel and aircraft from around the country was key to the success of the event.

One pilot based at RAF Lossiemouth said: ‘It surpassed all expectations of what my first live firing exercise on the Typhoon would be. Selecting the weapon and knowing a live missile would come off the rail was a unique moment; hearing the missile tone and pulling the trigger, followed by a large whoosh sound and a slight wobble of the aircraft was fantastic.

‘Watching the missile disappear into the sky in front of me was a moment to remember, it really is impressive how fast the Advanced Short Range Air-to-Air Missiles can go. The experience has given me a real appreciation of the capability of the missile and how it can be employed in a real combat situation.’ 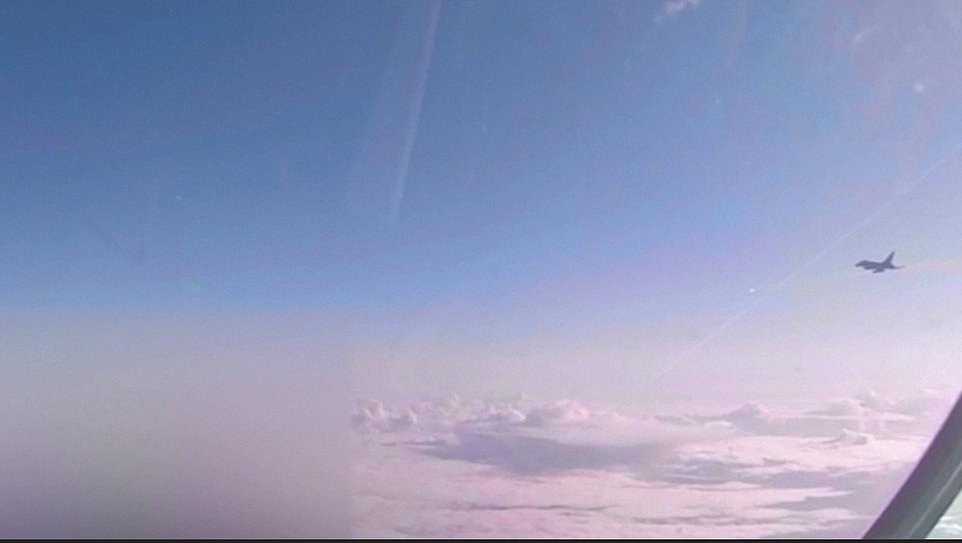 In Parliament this week, Defence Secretary Ben Wallace revealed that a Russian fighter jet recently ‘released a missile’ in the vicinity of an RAF aircraft over the Black Sea.

Ben Wallace told the Commons the incident occurred in ‘international airspace over the Black Sea’ on September 29.

He added that an ‘unarmed RAF RC-135 Rivet Joint’ – a spy plane – was ‘interacted with’ by two Russian SU-27s, one of which ‘released a missile in the vicinity of the RAF Rivet Joint beyond visual range’.

The Commons heard that the Russians blamed the incident on a ‘technical malfunction’.

In a statement updating MPs on the war in Ukraine, Mr Wallace said: ‘I would also like to share with the House details of a recent incident which occurred in international airspace over the Black Sea.

‘On September 29 an unarmed RAF RC-135 Rivet Joint, a civilian-style aircraft, on routine patrol over the Black Sea was interacted with by two Russian armed SU-27 fighter aircraft. It is not unusual for aircraft to be shadowed and this day was no different.

‘During that interaction, however, it transpired that one of the SU-27 aircraft released a missile in the vicinity of the RAF Rivet Joint beyond visual range.

‘The total time of the interaction between the Russian aircraft and the Rivet Joint was approximately 90 minutes.

‘The patrol completed and the aircraft returned to base.’

He added: ‘In light of this potentially dangerous engagement, I have communicated my concerns directly to my Russian counterpart, Defence Minister (Sergei) Shoigu, and the chief of defence staff in Moscow. 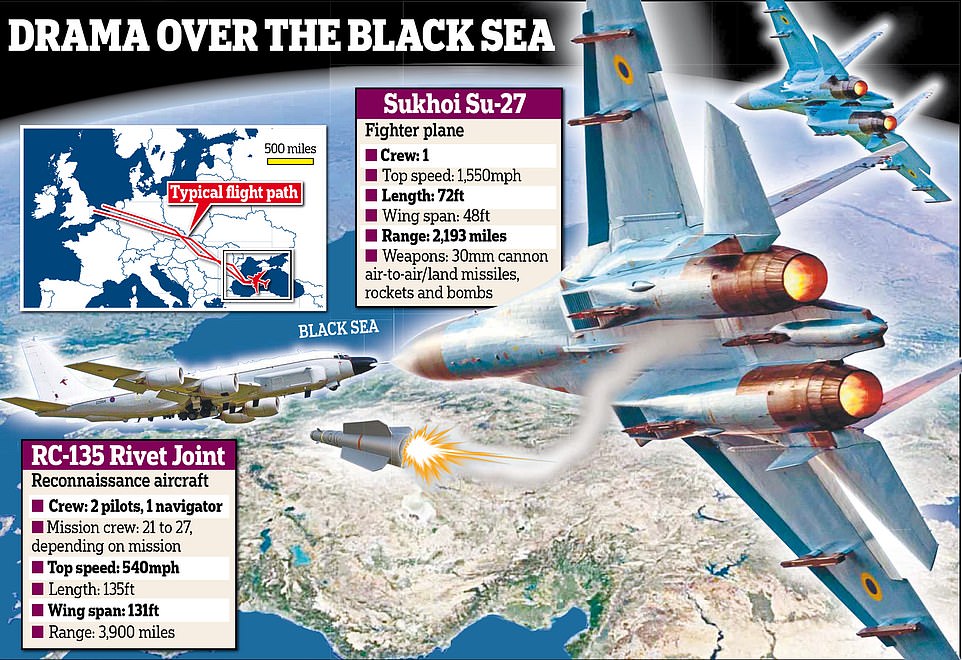 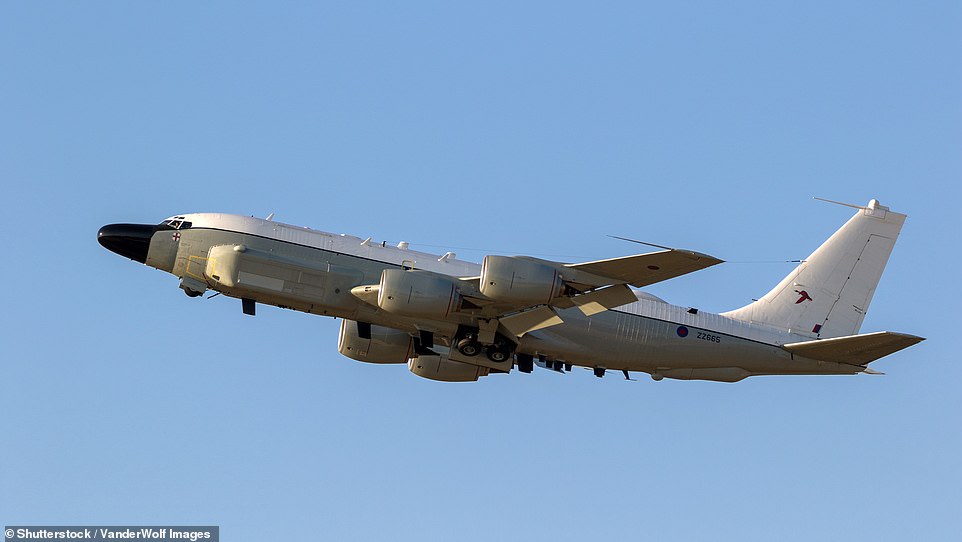 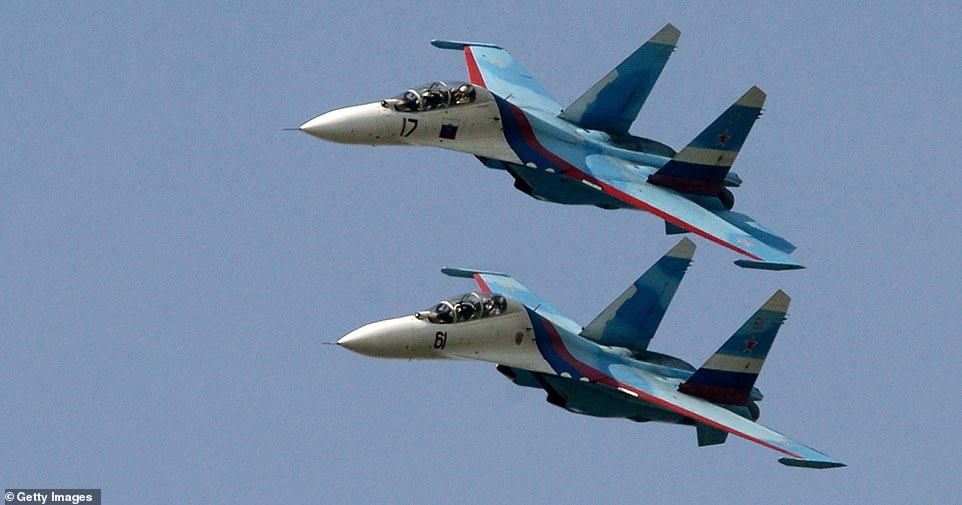 ‘In my letter I made clear the aircraft was unarmed, in international airspace, and following a pre-notified flight path.

‘I felt it was prudent to suspend these patrols until a response was received by the Russian state.

‘The reply by the Russian minister of defence on October 10 stated they have conducted an investigation into the circumstances of the incident and stated it was a technical malfunction of the SU-27 fighter.

‘They also acknowledge that the incident took place in international airspace.’

Concluding his report on the incident, the Cabinet minister said: ‘The UK Ministry of Defence has shared this information with allies and, after consultation, I have restarted routine patrols, but this time escorted by fighter aircraft.

‘Everything we do is considered and calibrated with regard to ongoing conflict in the region and in accordance with international law.