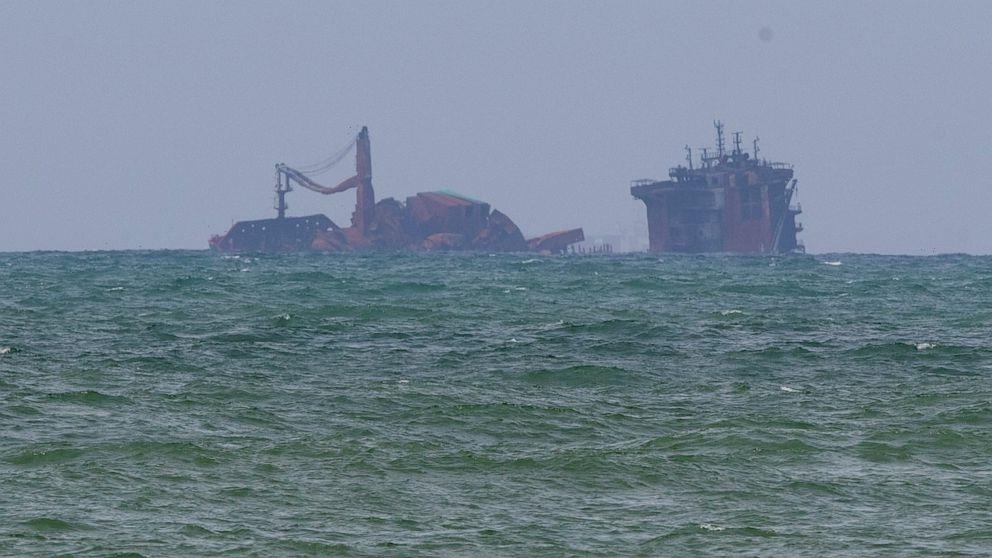 Navy spokesman Indika de Silva said divers also searched for any leakage from the ship on Sunday, but could not complete the mission due to poor ocean conditions.

“But we have not given up the operation and a team has been sent there today too,” he said.

Officials said there are no signs of oil or chemical spills, but environmentalists have warned of a possible environmental disaster if hazardous materials are released into the water.

The Singapore-flagged MV X-Press Pearl began sinking last Wednesday, a day after authorities extinguished a fire that had raged on the vessel for 12 days. Efforts to tow the ship into deeper waters away from Colombo’s port failed after the ship’s stern sank and rested on the seabed.

Its stern is still resting on the bottom at a depth of about 21 meters (70 feet) and the forward section is continuing to settle down slowly, officials said.

The fire has destroyed most of the ship’s cargo, which included 25 tons of nitric acid and other chemicals. But there are fears that remaining chemicals and hundreds of tons of fuel oil could leak into the sea, devastating marine life and further polluting the island nation’s famed beaches.

The disaster has already caused debris to wash ashore, and the government has banned fishing along about 80 kilometers (50 miles) of coastline.

A ship manifest seen by The Associated Press described the X-Press Pearl as carrying just under 1,500 containers, with 81 described as containing “dangerous” goods.

The fire erupted on May 20 when the ship was anchored about 9.5 nautical miles (18 kilometers) northwest of Colombo and waiting to enter the port. The navy believes the blaze was caused by its chemical cargo.

A Colombo court has banned the captain, chief engineer and assistant engineer from leaving the country. The government has said it will take legal action against the owners of the ship to obtain compensation.