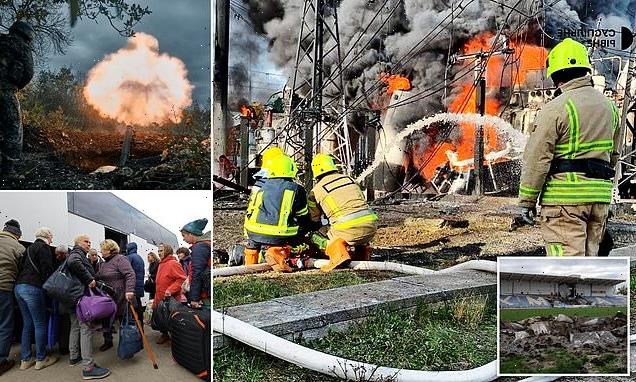 Russia unleashes missile blitz on Ukraine’s power stations as Putin tries to shut down the country’s electricity, heating and water supplies ahead of winter

Russia unleashed a fresh wave of missile strikes on cities and towns across Ukraine yesterday as Vladimir Putin seeks to shut down the country’s electricity, heating and water supplies ahead of winter.

They rained down on power facilities from Odesa, the Black Sea resort in the south, to Kovel, a medieval town near the Belarus border in the north, leaving about 40 per cent of the energy infrastructure out of action.

It was the thirteenth day in a row that drones and missiles have targeted the war-torn nation’s power system, resulting in blackouts, water shortages and desperate pleas from leaders for citizens to limit usage. 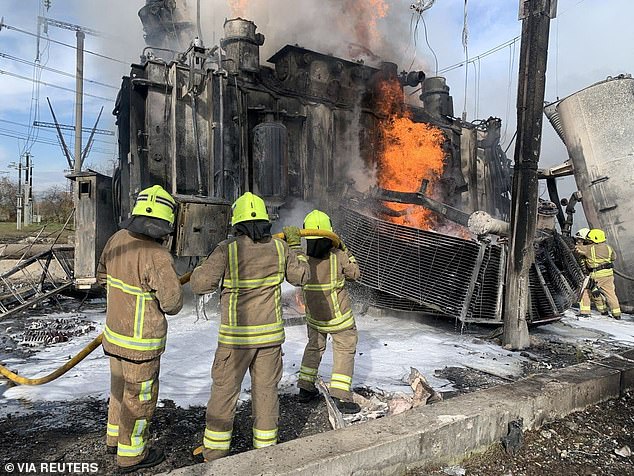 Firefighters work to put out a fire at energy infrastructure facilities in Rivne on Saturday, as Russia unleashed a fresh wave of missile strikes across Ukraine in a bid to cripple the country

Putin, humiliated by military setbacks in his bungled invasion, is trying to weaponise winter in Ukraine by freezing the nation into submission – just as he is weaponising his control over energy supplies in Europe by driving up prices.

The tactic was unleashed two days after the dictator enlisted Sergei Surovikin – a thuggish veteran of the Syrian conflict nicknamed General Armageddon – to take command of the invasion and salvage his beleaguered regime.

It comes as the Kremlin faced further setbacks in the eight-month war, with Russian-installed authorities in the southern city of Kherson ordering residents to leave ahead of Ukrainian advances. 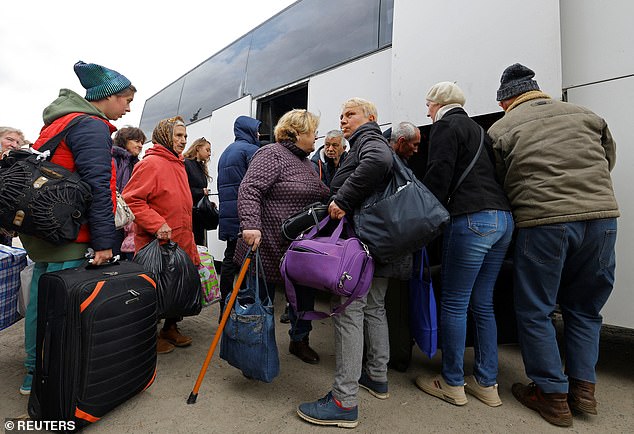 The pro-Putin administration called on civilians to use boat crossings over the Dnieper River to move deeper into Russian-held territory.

Ukrenergo, the state electricity supplier, said yesterday’s attacks caused the most devastating damage yet to its systems in the west of the country.

Ten of Ukraine’s 24 regions and 1.5million people had power cuts yesterday, including in the capital Kyiv.

The state rail operator, Ukrzaliznytsia – which has kept going with minimal disruption throughout the war – said it was bringing older coal-powered trains back into service and seeing delays ‘due to the enemy’s attack’.

In Zhytomyr, a city 90 miles west of Kyiv that has suffered a series of recent strikes, half the population of 220,000 were without electricity and water yesterday.

Serhiy Sukhomlyn, the city’s mayor, told me: ‘We are ready to withstand these difficulties although there are no street lights in the city in the evenings, some public transportation is not operating and today we are experiencing water supply problems.’

Hospitals are relying on emergency generators, while engineers desperately try to patch up damaged facilities to restore service.

Yet Sukhomlyn insists the nation will remain defiant.

‘This won’t lead to the Ukrainian people surrendering and offering Putin to start peace talks.

‘The victory will be determined at the frontline and we are ready to endure the difficulties to bring victory closer.’

The attacks – at least 330 in two weeks – signify a new twist in the war. Putin wants to cripple Ukraine’s infrastructure to demoralise a population that has already seen grotesque atrocities and millions forced to flee their homes.

President Volodymyr Zelensky, ruling out negotiations with Putin last week, warned Europe’s leaders that this ‘terror’ is also intended to drive a fresh exodus of people from his country to stoke disruption across the continent. 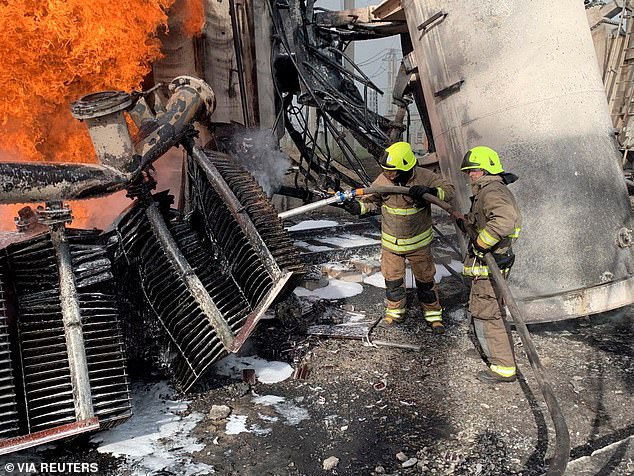 Missiles rained down on power facilities from Odesa, the Black Sea resort in the south, to Kovel, a medieval town near the Belarus border in the north, leaving about 40 per cent of the energy infrastructure out of action. Pictured: Firefighters in the Rivne region

Defence sources said more than 30 cruise missiles were fired yesterday from Russian aircraft and naval vessels in the Black Sea, with 18 shot down before hitting their targets – including five heading towards Kyiv.

Almost 200 attacks have involved kamikaze drones supplied by Iran, which fly low and hover over targets such as the electricity sub-stations that supply the grid.

This hits Ukraine’s Soviet-era heating and water systems, which rely on electricity to pump supplies through trunk lines into homes and business premises. 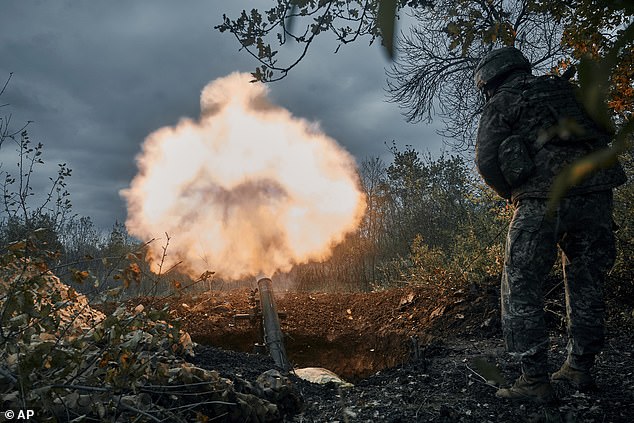 After Zelensky urged people to cut down use of electricity, Ukrainians began talking about ‘the energy frontline’ as they shared tips on reducing consumption.

In three regions, police are patrolling streets after darkness to ensure shops, firms and offices turn off unnecessary lights such as window displays and neon signs – warning those who fail to take action will have power cut off.

Kyiv has been divided into three areas, with rolling four-hour blackouts for each in turn.

Residents have been urged to avoid using electrical appliances – even kettles and wi-fi routers – between 7am and 11pm.

‘Even one saved kilowatt is a help to our energy system,’ said Oleksiy Kuleba, the region’s governor.

Walking around the capital after nightfall at 6pm, it is striking to see the number of shops, cafes and restaurants closed.

There is an eerie darkness and quiet – which feels almost reminiscent of the early days of the war.

In one city centre coffee shop the barista Danylo said they were closing up shortly after 8pm on Friday night when the lights went off.

So the staff lit candles and played patriotic songs at high volume while they cleaned up.

‘War time is very difficult for businesses,’ he said. ‘Obviously we would all prefer there were no blackouts, or sirens when we must close down, or bad inflation caused by the war – but it is better to be in darkness than under Russian rule.’