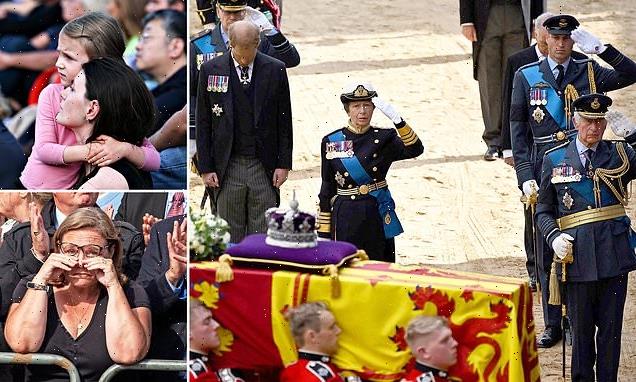 They watched in a strange solemn silence… expressions frozen in awe: SAM GREENHILL on a tearful public witnessing the poignant procession

Tens of thousands of people were there – along with an eerie near-silence.

In the minutes before the poignant procession marched past, practically nobody dared to move or say a word.

Until then, there had been an excited chatter among members of the crowd who had bagged their spots early at the barriers to witness the historic moment the Queen left Buckingham Palace for the final time.

But then suddenly everything was stilled – as the faint drumbeat of the Grenadier Guards band drifted over St James’s Park.

For the thousands waiting patiently on Horse Guards Road, just around the corner from The Mall, the procession could be heard long before it could be seen. 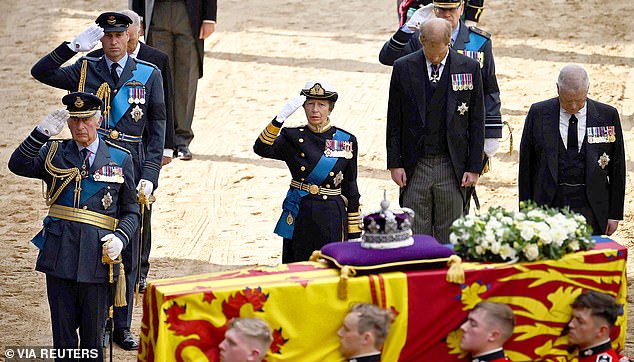 King Charles, Prince William, Princess Anne, Prince Harry and Prince Andrew with the coffin of the late Queen Elizabeth. The coffin will lie in state in Westminster Hall until Monday, the day of the state funeral

And as the gentle thump-thump of the military drummer grew louder, mourners began getting ready. Immediately, a hush descended. A man at the front in his 40s, wearing a large array of military medals on his blazer, adopted a rigid pose, eyes-front.

People waiting patiently on camping stools quickly stood up. Others who had been on their feet for hours, and had no space to do anything, seemed to want to prepare themselves in some way, brushing down their clothes, shifting their positions and straightening their backs.

Unfortunately an elderly woman – having probably waited for hours – fainted only minutes before the spectacle arrived. 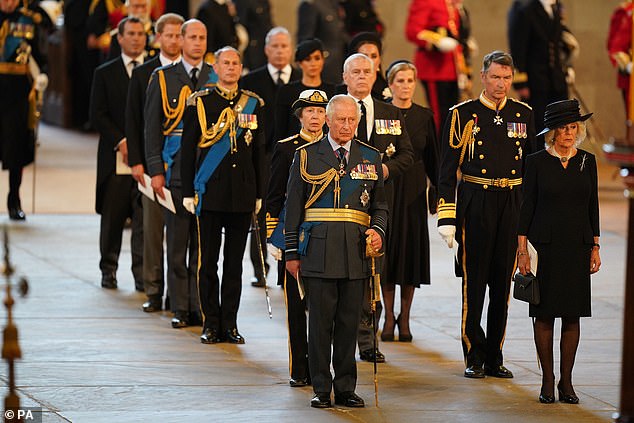 ‘As the gentle thump-thump of the military drummer grew louder, mourners began getting ready. Immediately, a hush descended. A man at the front in his 40s, wearing a large array of military medals on his blazer, adopted a rigid pose, eyes-front’

At the first sign that the long wait was over, a grinning boy in sunglasses was hoisted on to his father’s shoulders and had by far the best view, over everyone’s heads. Except that it was still a good ten minutes before anything arrived – and, judging by the waning enthusiasm of his father’s expression, the lad was quite heavy. And of course, across the crowd a forest of hands holding mobile phone cameras began sprouting.

Yet for minute after minute, despite thousands of people standing there, the area was becalmed by the strange, solemn silence.

And then a radio commentator in a glass box on stilts, who from his vantage point could see down The Mall, signalled to the crowd on Horse Guards Road that the cortege was on its way. He was rewarded with a grateful cheer.

Being mainly British, many of the wellwishers were wearing raincoats, even though it had turned into a bright, balmy day.

But underneath, a large proportion had also chosen something black to wear, and their expressions matched as the procession drew near.

The gun carriage of The King’s Troop Royal Horse Artillery bearing the Queen trundled past a sea of bleak faces. Some bowed their heads in her honour and one or two threw stems of roses. But most just watched mesmerised, their expressions frozen in awe.

Before their eyes, the coffin draped in the Royal Standard passed by, followed immediately by the King, the Princess Royal, the Duke of York and the Earl of Wessex, and then the Prince of Wales and the Duke of Sussex, plus a host of less senior royals. It was a huge amount to take in within a few seconds.

A police officer stood guard every few yards of the route – and yet few of them saw the incredible spectacle passing just inches away. It was their duty to watch the crowds, standing in the road but facing away from the cortege. There were gasps at the sight of the Imperial State Crown, worn by the Queen on the way back to Buckingham Palace after her Coronation, as it glittered in the sunlight atop her coffin.

The procession marched to the pace of a grenadier’s muffled drum draped in black beaten at 75 paces per minute, the royals keeping in perfect step with the Guardsmen.

Wellwishers’ eyes darted from the coffin to the doleful King to William and Harry, and many were quickly filled with tears.

And then, as the end of the procession finally rounded the bend to Horse Guards Parade, everyone took a deep breath. Children, parents, grandparents, tourists, military veterans and others from all walks of life broke into a spontaneous round of muted applause.

For some, the emotion was just too much and the tears began to flow. Several red-eyed mourners were consoled with an arm around them or just a light touch on the shoulder from whoever was standing nearby. 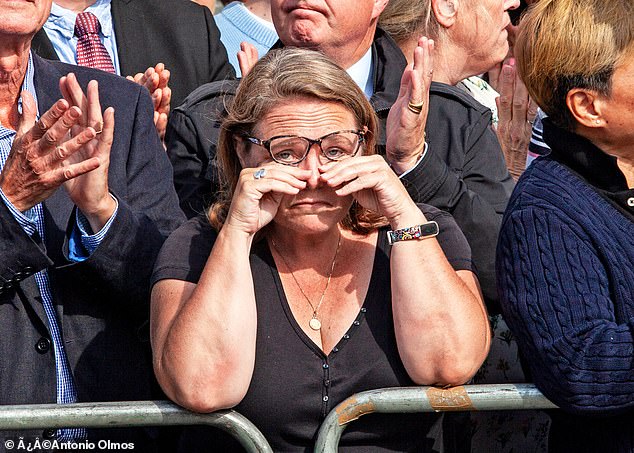 ‘For some, the emotion was just too much and the tears began to flow. Several red-eyed mourners were consoled with an arm around them or just a light touch on the shoulder from whoever was standing nearby’ 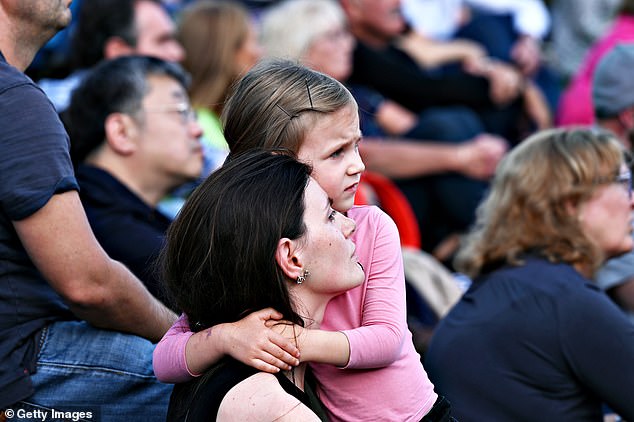 ‘Children, parents, grandparents, tourists, military veterans and others from all walks of life broke into a spontaneous round of muted applause’

Laura Blake, 46, said: ‘It was very, very emotional. Everyone went so quiet. You could hear the stillness. It was such an honour to witness that. As soon as we heard the music, the sun came out from behind the clouds. It was magical.

‘It was very emotional. The precision – every little detail – was spectacular. There was a quiet dignity in what they were doing. All the detail and the discipline.

‘It makes us so proud to be British. I’m so proud of this country and I’m so proud that we have a Royal Family. Everyone was just mesmerised. We’ve been chatting to people we’ve never met before.’

She added: ‘The Queen has always united people. She’s been that one constant in our lives. She’s always had the right words. We didn’t know if we would be able to see anything. But, after everything she’s done for us, all we could do is try.’

Fabiana Riveros, 32, from Essex, said: ‘It made me cry and I didn’t think it would. This morning the atmosphere in the crowd was really friendly – nobody was pushing to get to the front or arguing.

‘It was all very respectful. When the procession came past it was very quiet as people contemplated the impact the Queen has had on the country for the last 70 years.’ 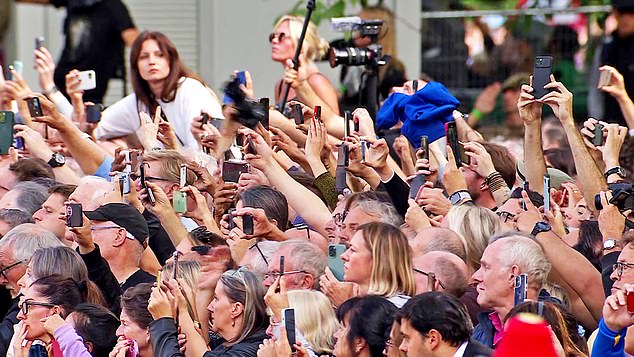 Mourners went to extraordinary lengths to soak up yesterday’s moment in history.

Some clambered on railings, others attempted to scale trees – until police ordered them down. The Department for International Trade offices overlook Horse Guards Parade and canny civil servants had pre-booked ‘meetings’ in rooms with the best views. In Hyde Park, giant screens had been set up and the area was packed with those who had not made it to the procession route in time or who simply wanted to enjoy a view of the entire parade. Matthew Danbury, 44, of Bewdley, Worcestershire, said: ‘I wanted to come to pay my respects. It’s a real moment in our nation’s history – the Queen leaving Buckingham Palace for the very last time.

‘It has been an extraordinary day and I cannot believe the huge crowds. It has been very moving.’

On The Mall, Elaena Shipp, 24, from north London, said: ‘I wanted to see a slice of history and this was a pretty momentous occasion. It is something many of us have never seen – the preparation for a state funeral for a serving monarch.

‘I wouldn’t have missed it for the world. There were thousands of people waiting but, as soon as the coffin with the Royal Family walking behind it approached, there was a hushed, solemn atmosphere.I was expecting it to be louder, with more people shouting from the crowd. It’s quite a fitting mood really, I think people are really feeling the gravity of the situation.’

Artist Alan Storer, 75, of Twickenham, south-west London, said: ‘It was very moving and in a way quite understated, so much so that I actually missed the Queen’s coffin even though it came right past me.

‘But I’m glad I came here and soaked up a piece of history. We’ve become so used to seeing the Queen smiling and waving at crowds that to know she isn’t here any more is quite strange.

‘I felt it important to kind of tune in to the energy of the occasion. It’s something to look back on and say “I was there”.’