Washington: Four Iranians have been charged in absentia by US federal prosecutors with plotting to kidnap an American journalist and smuggle her out of New York on a speedboat. 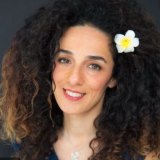 US journalist Masih Alinejad, the target of the alleged kidnap plot. Credit:Twitter

While the Justice Department indictment did not name the target of the plot, Reuters has confirmed she is Iranian-American journalist Masih Alinejad, who has contributed to the US government-funded Voice of America Persian language service and reports on human rights issues in Iran.

Alinejad, reached by phone after the indictment was released, said she was in a state of shock.

She said she had been working with the Federal Bureau of Investigation since the agency approached her eight months ago with photographs taken by the plotters.

“They showed me the Islamic Republic had gotten very close,” she said.

The four suspects hired private investigators in Manhattan to follow Alinejad and her family, claiming that she was a missing person from Dubai who had fled the country to avoid paying a debt, prosecutors said.

According to the indictment, they had researched how to smuggle the journalist out of New York on a speedboat headed for Venezuela, whose government is friendly to Iran.

The FBI alleges that the plot was part of a wider plan to lure three individuals in Canada and a fifth person in the United Kingdom to Iran. Victims were also targeted in the United Arab Emirates, authorities said.

“I knew that this is the nature of the Islamic Republic, you know, kidnapping people, arresting people, torturing people, killing people. But I couldn’t believe it that this is going to happen to me in United States of America,” Alinejad told The Associated Press.

William Sweeney Jr, the head of New York’s FBI office, noted that the indictment sounded a bit like “some far-fetched movie plot.”

“We allege a group, backed by the Iranian government, conspired to kidnap a US-based journalist here on our soil and forcibly return her to Iran. Not on our watch,” he said.

The Iranian intelligence officer, who remains a fugitive, was identified as Alireza Shahvaroghi Farahani.

According to the indictment, Farahani, 50, and three other defendants tried since at least June 2020 to kidnap Alinejad. If caught and convicted, the four could face life in prison.

The others charged in the kidnapping plot were identified as Mahmoud Khazein, 42, Kiya Sadeghi, 35, and Omid Noori, 45, all from Iran.

All four are believed to be in Iran and remain at large.

In recent years, Iranian intelligence officers have tricked a number of overseas activists to travel to destinations where they were kidnapped and sent back to Iran.

In 2019, Iranian intelligence officers lured Ruhollah Zam, a journalist living in France, out of the country, capturing and later executing him in Iran on sedition charges.

Representatives for the Mission of Iran to the UN could not be reached for comment.

said she had drawn the ire of Iran by publicising women in Iran protesting laws requiring head coverings, as well as accounts of Iranians killed in demonstrations in 2019.

She said Iranian operatives had tried multiple times to lure her to Turkey with threats and promises to meet family, she said.