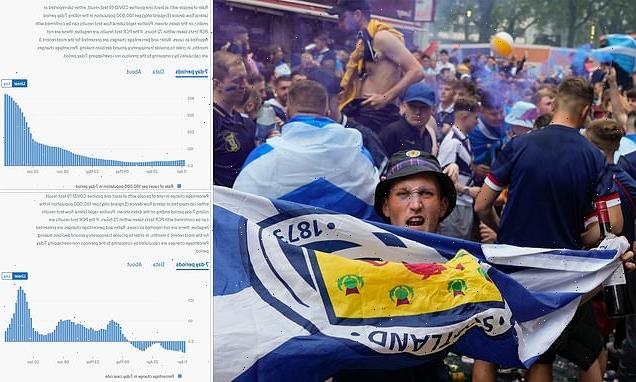 Scotland’s falling Covid cases may be down to the nation’s football team crashing out of Euro 2020 in the group stage, experts say… and England may see a similar trend after Sunday’s final against Italy

Scotland’s drop off in coronavirus cases may be down to the nation’s football team crashing out of Euro 2020 in the group stage, experts say.

And one coronavirus-tracking scientist believes England could see a similar trend in the wake of the Three Lions’ historic final against Italy on Sunday night.

Scotland was dubbed the sick man of Europe at the end of June, with six of the continent’s ten worst-hit regions being north of the border. Infections skyrocketed from fewer than 500 a day at the start of the month to 4,000 at the turn of July.

Researchers blamed the sudden surge — which was particularly prevalent in men — on fans meeting up in pubs and homes to watch Euro 2020 matches. Nearly 1,200 cases were found to have come from Scotland supporters who trekked down to London to watch the nation’s crunch match with England on June 18.

But the country’s seven-day case average has now dropped for five consecutive days, after it peaked at 3,454 on July 4. Yesterday’s figure stood at 2,999.

Professor Paul Hunter, an infectious disease specialist at the University of East Anglia, claimed Scotland’s exit from the competition on June 22 was one of the reasons behind its declining cases.

And he said the trend bodes well for England after ‘Freedom Day’ on July 19, with Euro 2020 having been finished for more than a week by then. 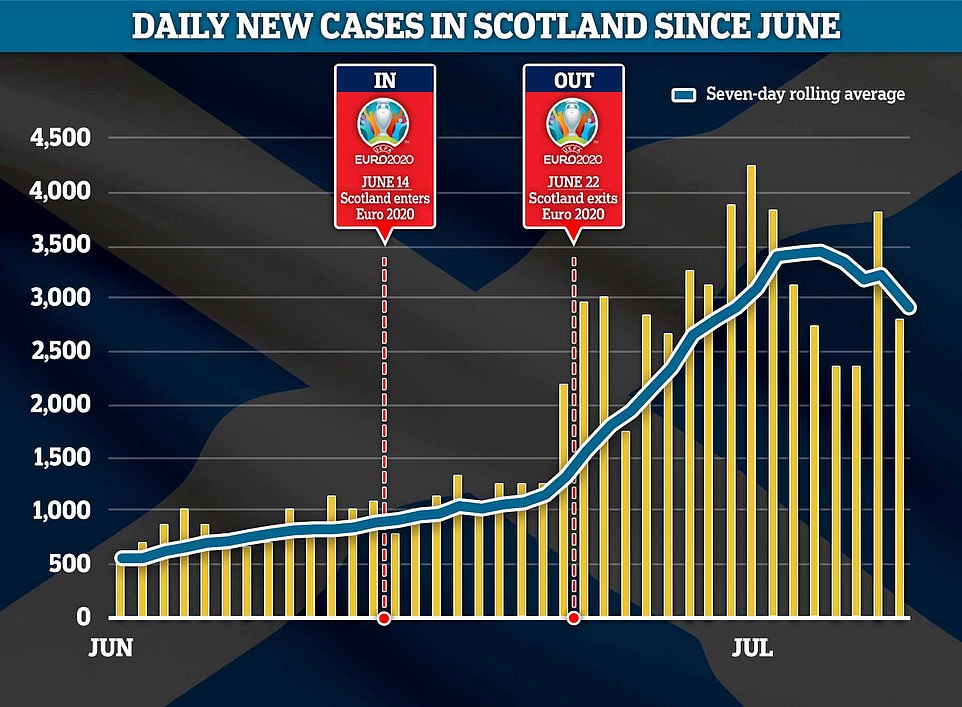 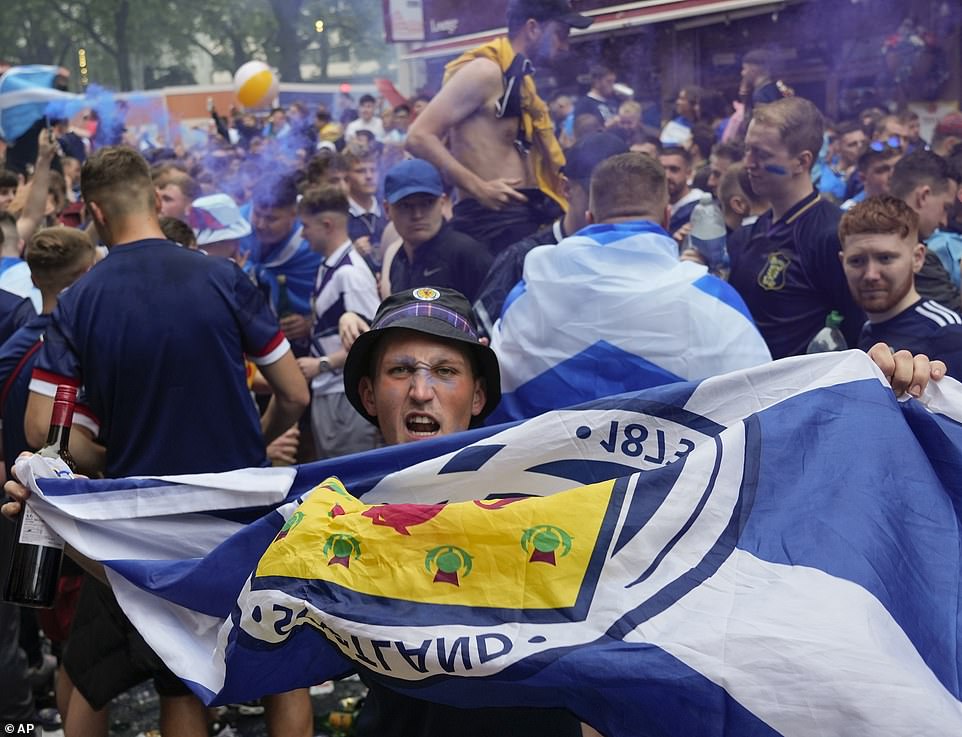 Scotland’s drop off in Covid cases has been caused by the football team’s exit from Euro 2020, Professor Paul Hunter, professor in medicine at the University of East Anglia, has claimed. Pictured: Scotland fans pack out Leicester Square in London before the game against England on June 18 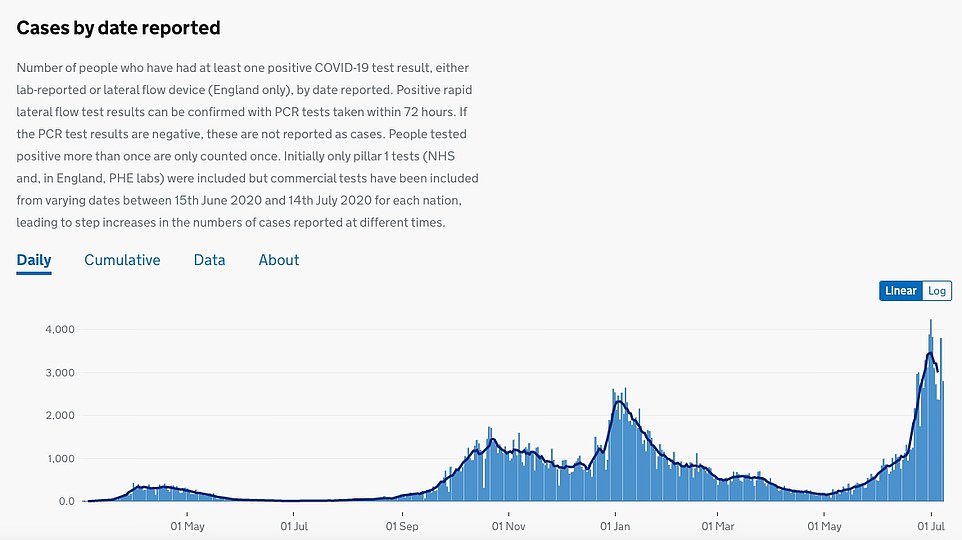 The signs show Scotland’s third wave of cases may already be over. 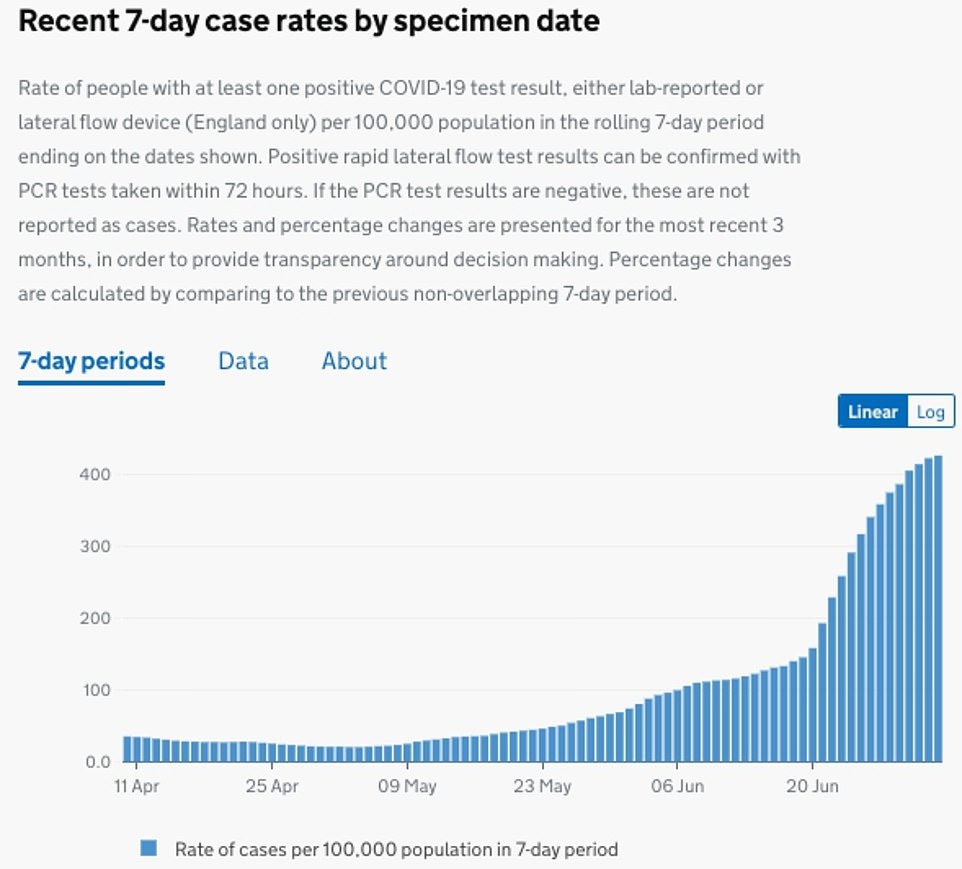 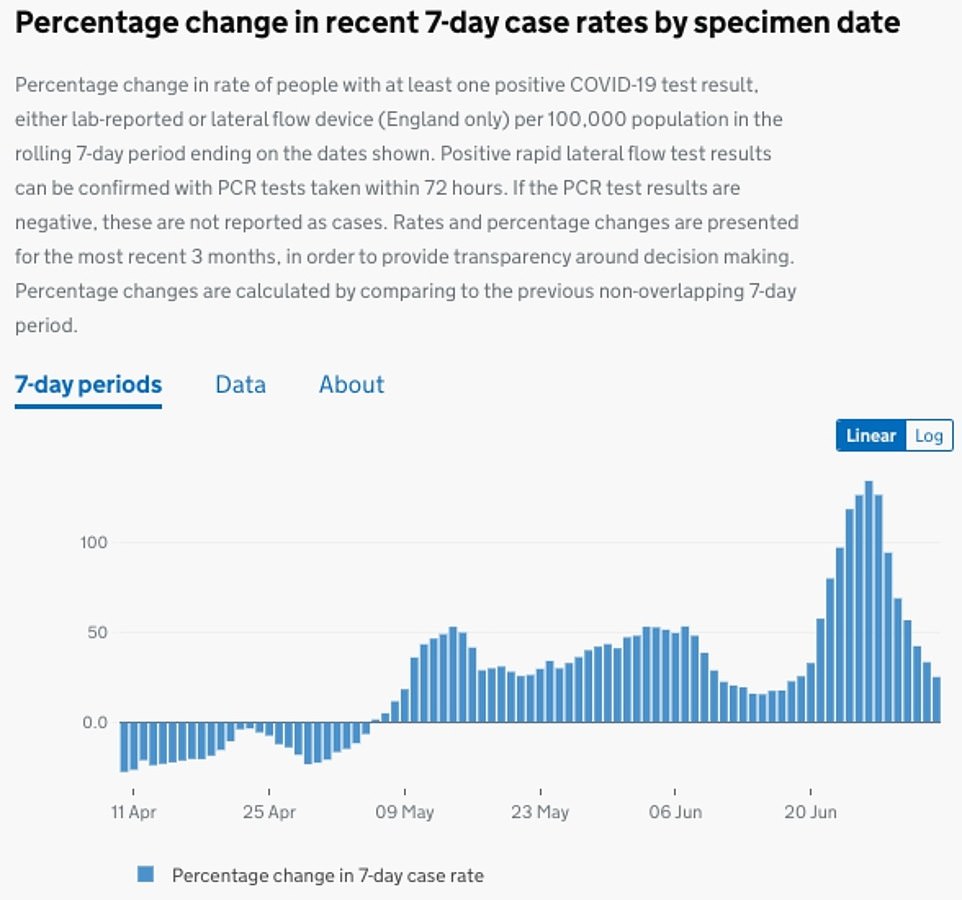 The surge in cases in Scotland has slowed down significantly since the nation’s exit from Euro 2020 on June 22. Graph shows: Percentage increase in the seven-day case average per 100,000

Professor Hunter told the Daily Telegraph: ‘It is difficult to escape the conclusion that celebrations around the Euros have been an important factor in driving up the epidemic in the UK. On the bright side this may mean less pressure after the Euros are over.

‘Case numbers may be declining in Scotland because the Euros are over and schools have been out for about a week so maybe we can expect an even more rapid decline and if so this may bode well for England after July 19.

‘We will know one way or another in about three weeks’ time.’

Researchers have already claimed the Three Lions’ success in the tournament may have been behind a ferocious spike in cases, with the nation hurtling towards 100,000 infections a day within weeks.

A major surveillance study by Imperial College London estimated cases across the country are doubling every six days, with infections having quadrupled in June — coinciding with the football competition.

Cases currently stand at around 25,000 a day across England, meaning the country may break through the six-figure barrier on Freedom Day if current trends continue.

But other data suggests cases may already be slowing down across the country, with yesterday the sixth day in a row the rise in the seven-day average for cases in the UK — 34.92 per cent — fell, down from 42.81 per cent the day before.

Thousands of fans were pictured without masks in crowds, hugging and high ficing friends when the two goals went in and the final whistle rang out. 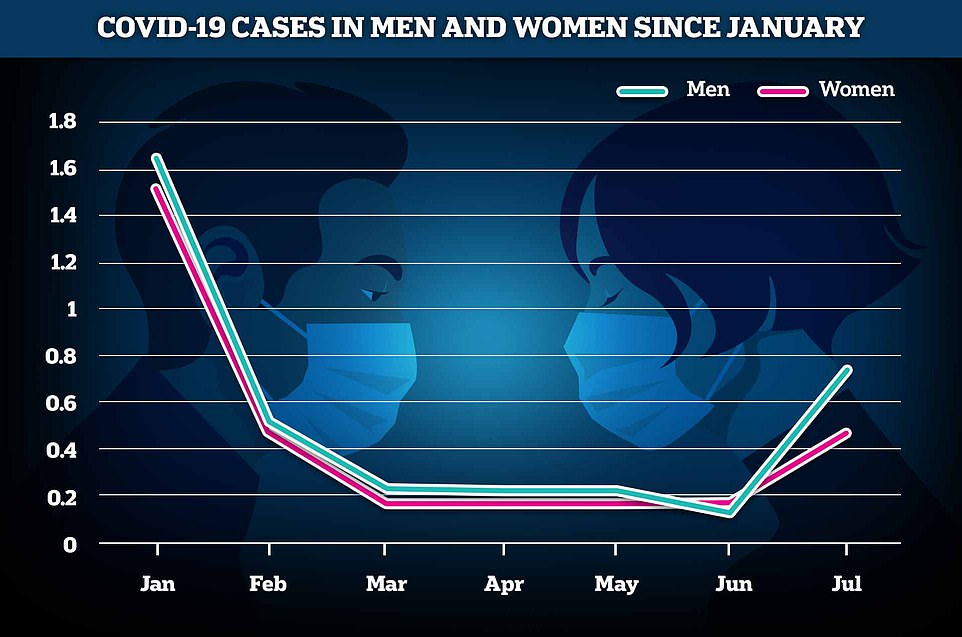 A major surveillance study estimated cases are now doubling every six days and found that infections in England quadrupled in June, with the rise clearly coinciding with the competition. Men are also around 30 per cent more likely to test positive than women and prevalence is highest among 18 to 24 year olds 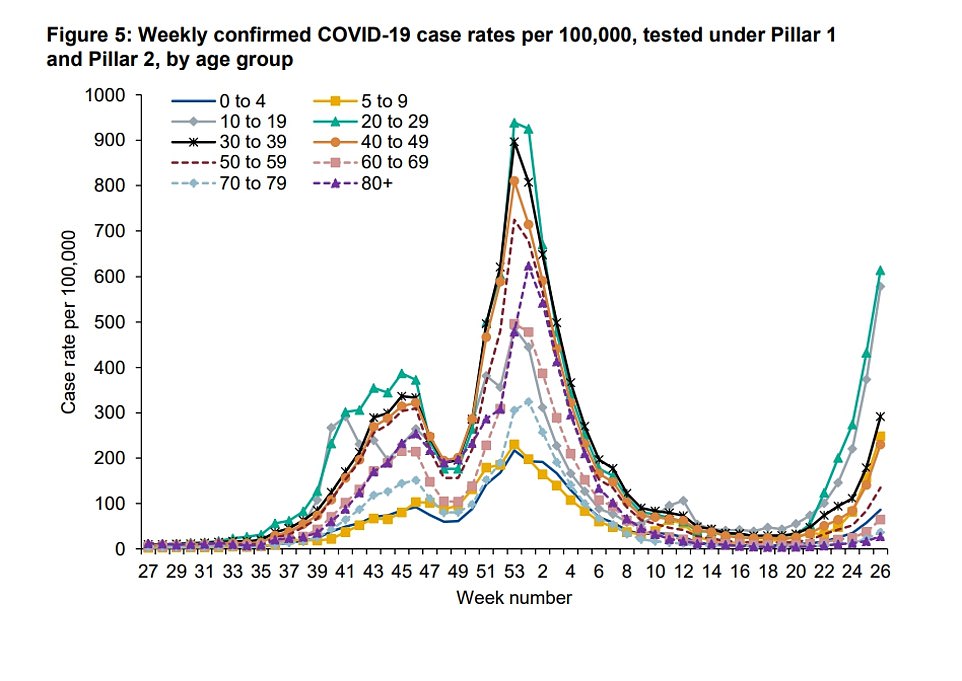 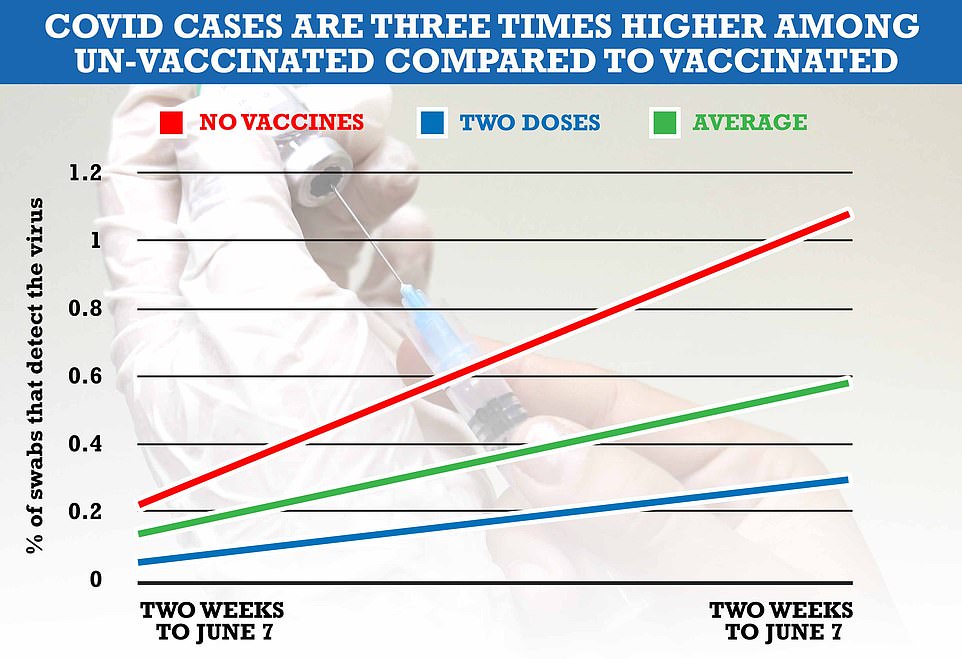 Infections among Britons were also more than three times higher among un-vaccinated people compared to those who got both doses of the vaccine. Experts said cases had risen in the double-vaccinated because jabs are ‘not perfect’, and only prevent symptomatic disease in about 70 per cent of cases. But they do block hospitalisations and deaths in 90 per cent

Scotland’s First Minister Nicola Sturgeon has already acknowledged cases in Scotland appear to be rounding off with 2,802 cases recorded yesterday, down from 3,799 the day before.

His comments came after Professor Jason Leitch, the Scottish Government’s national clinical director, said young men meeting up for Euro 2020 games was partially to blame for the surge in cases.

Covid infections across England are 13 times higher in people under the age of 30 compared to the over-60s, according to official figures which highlights the ‘vaccine effect’ on transmission.

Public Health England’s weekly surveillance report showed that in the week ending July 4, rates were highest among people in their twenties who have only recently been offered a jab, at 614 cases per 100,000.

AstraZeneca and Pfizer’s jabs have been shown to reduce the risk of catching the Indian Covid variant by up to 64 per cent and among those who still catch the virus, the symptoms are often milder.

The vaccines are even better at preventing serious illness, hospitalisations and deaths with an efficacy of more than 90 per cent.

This week he said it may also have been partly fuelled by large gatherings during games, with Scotland playing in its first national football competition since 1998.

Professor Leitch said: ‘Scotland being out [of the Euros] is a very, very unfortunate from a sporting perspective, but probably better from a Covid perspective.’

But experts yesterday warned England’s most successful international tournament since 1966 could cause a fresh surge in infections south of the border, as people meet up in large groups to watch the historic match on Sunday night.

Dr Christina Pagel, a mathematician at University College London and member of Independent SAGE, said there is ‘no doubt’ cases will spike because of the final.

She told MailOnline: ‘The worry about the finals at Wembley — and the matches have gone before — are about more than just the event.

‘It’s the celebrations before and after in pubs, with hugging shouting, singing in crowds — all high risk activities for transmission

‘This isn’t just about the fans attending the match but the millions of fans watching across the country in pubs and each other’s homes.

‘So while it’s amazing watching England do so well, there’s no doubt in my mind it will lead to increases in Covid infections.’

And Professor Martin McKee, an expert in public health at the London School of Hygiene and Tropical Medicine, said the virus was less likely to spread at the match itself.

He said the greatest risk was posed by fans celebrating in packed bars and congregating on public transport.

Professor McKee told MailOnline: ‘The association between spikes in cases and football matches is complicated.

‘We did see clear increases associated with the England Scotland match and when Finnish supporters went to St Petersburg.

‘However the risk is less likely to be at the match, where spectators are in the open, but in enclosed spaces such as bars and public transport.

‘Crucially, the risk is determined by the probability that someone in the crowd has Covid and that is becoming much more likely now as cases are soaring.’

Cases in England are mostly in younger people, with a Public Health England surveillance study yesterday showing infections are still 13 times higher in young people compared to the over-60s.