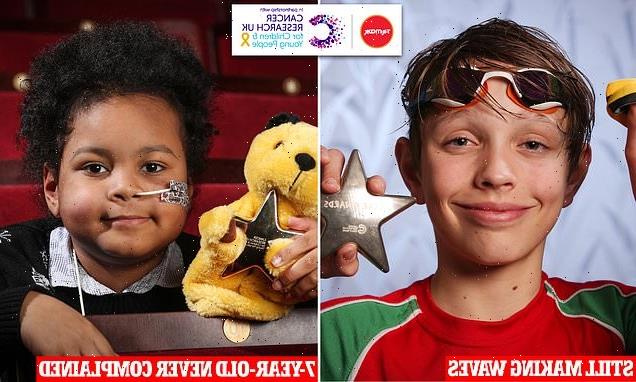 Search for the young stars who refuse to be bowed by cancer: Mail helps launch Cancer Research UK Star Awards to celebrate courage and resilience of children battling illness

The Mail today helps to launch this year’s Cancer Research UK Star Awards, which celebrate the courage of children diagnosed with cancer.

The event highlights the extraordinary resilience shown by the 2,500 or so British under-18s who are diagnosed with the disease every year.

Here we feature a selection of previous Star Award recipients, each with a remarkable story. 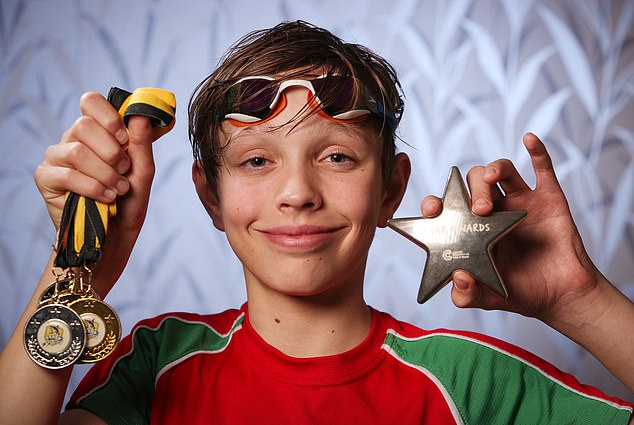 Few of Connor Sunderland’s swimming rivals know quite how tough the boy in the next lane is. For not only is he pushing them every inch of the way in the pool – he’s doing it having overcome cancer

Two of them, Connor Sunderland and Anneeka Hussain, have themselves helped raise the profile of childhood cancers by presenting a short film, the Star Award Show, which can be seen online.

Any child who has been diagnosed with cancer is eligible to be nominated for an award, which includes a special silver star, a T-shirt, a certificate signed by a celebrity and a £50 voucher from TK Maxx, the generous partner of Star Awards. Its organisers stress that it is not a competition.

Among those supporting the awards is actress Dani Harmer, who starred as Tracy Beaker in CBBC’s adaptations of Jacqueline Wilson’s popular books.

Few of Connor Sunderland’s swimming rivals know quite how tough the boy in the next lane is.

For not only is he pushing them every inch of the way in the pool – he’s doing it having overcome cancer. So poorly was he when diagnosed that parents Kerrie and Glen said doctors feared the worst. Mrs Sunderland, 42, said: ‘He was going into multi-organ failure. His body was shutting down.’

Connor was just five when he was diagnosed with non-Hodgkin Burkitt lymphoma, a type of white blood cell cancer.

But after major surgery and intensive chemotherapy he was declared cancer-free in November 2014. In 2016 Connor was presented with a Star Award. He is helping promote them this year having co-presented the Star Awards Show.

Connor, now 13, said: ‘I felt like a real star for the day and I’ll always remember it.’

She said: ‘Every child affected by cancer is a star in their own right. The impact on their young lives can be devastating and it takes support from the whole family to face a diagnosis. That’s why the Star Awards are so special, because they celebrate siblings too.’

The Mail has teamed up with Cancer Research UK to launch the Fighting to Beat Children’s Cancer campaign, which is raising money for vital research. 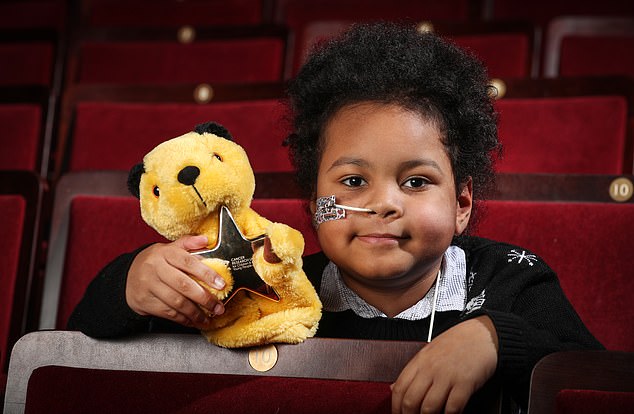 Jaden Stewart has experienced more medical emergencies in his short life than most people endure in decades. Besides extensive chemotherapy treatment for cancer, the seven-year-old has had a stroke and brain surgery for an abscess

All money raised will support the charity’s work on cancers affecting children, so that more under-25s can survive with a good quality of life.

As well as working toward cures, Cancer Research UK is helping to develop kinder treatments to leave survivors with fewer lifelong side effects, such as hearing loss and infertility.

Award winner Amarvir Chatha had to cope with chemotherapy from six to 11. By the time he completed his treatment in 2015, cancer had been part of his day-to-day existence for nearly half his childhood.

All money raised will support the charity’s work on cancers affecting children, so that more under-25s can survive with a good quality of life

The 7-year-old who never complained

Jaden Stewart has experienced more medical emergencies in his short life than most people endure in decades.

Besides extensive chemotherapy treatment for cancer, the seven-year-old has had a stroke and brain surgery for an abscess.

But mother Laura said: ‘Jaden’s never asked ‘Why me? Why have I gone through this, and not my friends?’ He’s not a complainer.’

Last year he received a Star Award for his bravery coping with acute lymphoblastic leukaemia, which he was diagnosed with in June 2020. Laura, a 42-year-old administrative supervisor from Southampton, said: ‘We must do all we can to improve treatments. Every child deserves to live.’

Jaden is back at school and thriving, with treatment planned to finish next summer.

The campaign, launched last week, is for more investment in research into childhood cancers

When he first fell ill in 2010 his family nearly lost him. Consultants at Addenbrooke’s Hospital in Cambridge, where he was taken for emergency treatment, had to put him in a coma.

They told his parents: ‘We can’t guarantee he’ll survive the night.’ Mother Nikki ascribes his recovery to the doctors’ expertise and the prayers of 70 Sikh relatives and friends who gathered at their Ilford home.

His aunt Sandip nominated him for a Star Award in 2016. Amarvir, now 18 and an apprentice engineer, said: ‘The awards event held by Cancer Research UK was amazing and in that moment I felt like a celebrity.’

Meanwhile Anneeka Hussain had to lose her leg to ensure her cancer would not return three years ago. ‘When she was given that news, she struggled a bit,’ said her mother Kay, from Leeds. ‘It’s a very difficult thing to accept at any age – and she was only seven.’ She said winning the award ‘recognised her courage dealing with what she’s been through’.