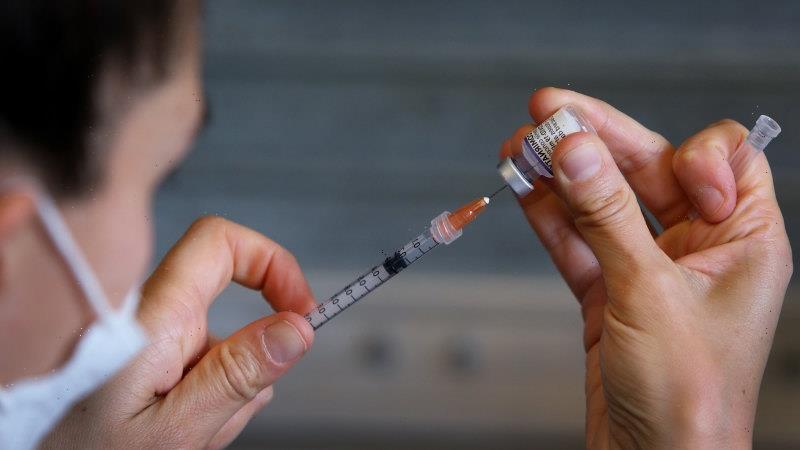 NSW and Victoria are working together to devise a plan to stop another school year from being disrupted, as the federal government announced teachers and childcare workers would be exempt from isolation.

With term one less than three weeks away, young teenagers will also be able to consent to a COVID-19 jab without a parent or guardian’s permission at state hubs, with NSW easing guidelines as vaccine uptake among children aged 12 to 15 stalls. 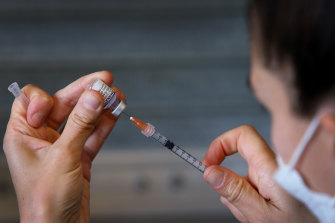 Teenagers will be able to access vaccines at hubs without a parent present.Credit:Getty Images

Under new national rules announced by Prime Minister Scott Morrison on Thursday, workers in sectors including education who are a close contact – defined as living with someone who has COVID-19 – can return to work if they do not have symptoms and return a negative rapid antigen test result.

While the supply of rapid antigen tests and how they will be used to monitor COVID-19 is a major component of the return-to-school plan, the NSW government is also considering how the education workforce and outbreaks in classrooms will be managed as it seeks to mitigate the widespread closure of schools.

NSW and Victorian Premiers Dominic Perrottet and Daniel Andrews have held talks on the matter, with the states expected to present very similar plans to next week’s national cabinet.

“Given NSW and Victoria are in almost identical situations, it makes sense for us to seek alignment,” a senior NSW government source, who is not authorised to comment publicly, said.

Mr Morrison said national cabinet also had “a serious discussion” about the role of surveillance testing using rapid antigen tests in schools and daycare centres at its meeting on Thursday. Details will be agreed upon next week.

“Parents and teachers and those working in schools, teachers aides and so on, will be well aware of what the arrangements are before school goes back,” Mr Morrison said.

A NSW health spokesperson said easing rules so teenagers can access vaccines at hubs without a parent present brings the vaccination in line with the mature consent guidelines in place in other health settings.

“It is to ensure a small number of children, aged 14 and 15, who may have difficulty getting consent can have the opportunity to get vaccinated,” a spokesperson said.

But teachers’ unions are angered by the new furlough rules that mean workers could be hauled back into classrooms while close contacts, as well as the government’s week-long delay in releasing its national safety plan for schools.

NSW Teachers’ Federation president Angelo Gavrielatos said Mr Morrison had insulted the profession. “What was delivered today was not a national plan but a set of incoherent slogans,” he said. “Not one target has been set with regards to the risk mitigation strategies needed in this environment.”

He said the union would meet with state education department officials on Friday and “pursue the need for improvements in risk mitigation strategies, including the use of rapid antigen tests as an important line of defence, requirements for mask wearing, and enhancements with regards to ventilation and air quality.”

The NSW government’s school plan, which will include a “test to stay” regime, is due in the coming week. Meanwhile, Mr Gavrielatos said he would advise teachers to seek health advice if they were considered close contacts.

The Australian Education Union also said teachers who “feel vulnerable as a close contact or they are worried about the potential risk to others” should not go into school environments and lamented the delays in developing a national schools plan.

The acting NSW secretary of the Independent Education Union covering private schools, Pam Smith, said she feared the changes to isolation rules would cause more disruption to staff.

She said Mr Morrison had been vague on how surveillance testing for teachers and their access to rapid antigen tests would work. “Watering down work health and safety provisions in the third year of the pandemic because the government failed to plan is unacceptable.”

The Sydney Catholic School system also has partnered with the local health district to create vaccination hubs at two of its schools – Marcellin College in Randwick and St Patrick’s College in Strathfield – which will give 5- to 11-year-olds a comfortable and familiar place to receive their first dose next week.

The clinics will operate from January 18 to 21, and again eight weeks later for students to receive their second dose. “I hope that setting up these clinics will give parents the comfort and confidence of a familiar location and community approach to access vaccination,” said executive director Tony Farley, who has advocated for schools to be used as vax hubs.

Vaccination rates in teenagers have flatlined in the past three months, leaving about 70,000 children aged 12 to 15 in NSW yet to receive a first dose, and 85,000 who are not fully vaccinated.

The addition of at-home test results brought the state’s test tally to almost 93,000 new COVID-19 cases on Thursday, but authorities said the newly registered rapid test results might include infections registered multiple times and cases that have also been confirmed via a PCR test.

Paediatricians have previously pushed for the integration of COVID-19 vaccination into school-based immunisation programs, which they say could be critical in lifting the 12 to 15-year-old vaccination rate which sits at 78.2 per cent double-dose and 81.7 per cent with a first jab.

There are 2383 people in hospitals with the virus, of whom 182 are in intensive care units.

About six per cent of children aged 5 to 11 have had a first jab, with about 46,000 children receiving their first dose by mid-week.