Public health campaigns to promote COVID-19 vaccination should steer clear of needles, medical items and even images of the Prime Minister getting the jab to avoid inducing feelings of disgust.

That’s the message from a recent Macquarie University study, published in the ISBT Science Series, which compared the role of disgust with other emotions such as fear when it comes to blood donation. 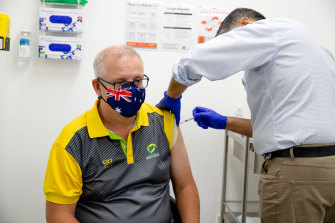 The Prime Minister receives his vaccine in March. Credit:Edwina Pickles

“Disgust can potentially turn people off from various medical procedures, especially those involving needles,” said lead researcher Philippe Gilchrist. “Disgust might be present in the promotional campaign images, the phrasing of public health messages, or even in the clinics.

“In fact, vaccinations may actually be even more disgust-inducing because it involves injection of a foreign substance into the body – almost an extreme prototype for disgust.”

Health authorities are grappling with how to overcome a stubborn percentage of people who say they are unlikely to take the COVID vaccine or don’t want the brand of vaccine offered to them.

Prime Minister Scott Morrison and other politicians have had their vaccinations broadcast on national television. A video on social media depicted Dolly Parton singing “vaccine” to the tune of her hit, Jolene, before receiving the jab.

Dr Gilchrist said there was a risk of vaccination campaigns overestimating the intellectual appeal of a COVID-19 jab, while neglecting the impact of more subtle influences on behaviour and hesitancy.

“Very simple things can likely be very effective, including obscuring visible disgust-related paraphernalia in advertisements or in clinics, or even adjusting the phrasing in promotional campaigns,” he said.

A spokeswoman for the Department of Health said the COVID-19 vaccines campaign provided timely, fact-based information to help people make informed decisions about vaccination for themselves.

“Each phase of the campaign is informed by consumer research to ensure it is delivering the messages Australians are seeking to support uptake of the program,” she said.

The research findings follow earlier studies that found needle fear was the main reason why 7 per cent of parents and 8 per cent of children avoided vaccinations.

Blood shortages remain an ongoing challenge, with only 1 in 30 Australians donating blood each year. Blood donation service Lifeblood made two urgent appeals for blood in March, and there have been a record number of donor cancellations.

A Lifeblood spokeswoman said it had developed strategies to help potential donors deal with fear or disgust. “Knowing you have control over exposure to the thing you may not want to see is key.”

The study’s co-author Simone Schnall, a reader in experimental social psychology at the University of Cambridge, said blood donation and vaccination both involved so-called “body envelope violation” because a needle is pushed through the skin.

Dr Schnall said feelings of disgust, and thus willingness to be vaccinated, may also be linked to political views.

“We know that people who tend to be politically conservative tend to be more concerned with issues that relate to ‘going against nature’, or interfering with what they may consider God’s creation,” she said. “This fits with the observation in the US that Republicans are much less likely to get vaccinated than Democrats.”

Stay across the most crucial developments related to the pandemic with the Coronavirus Update. Sign up to receive the weekly newsletter.