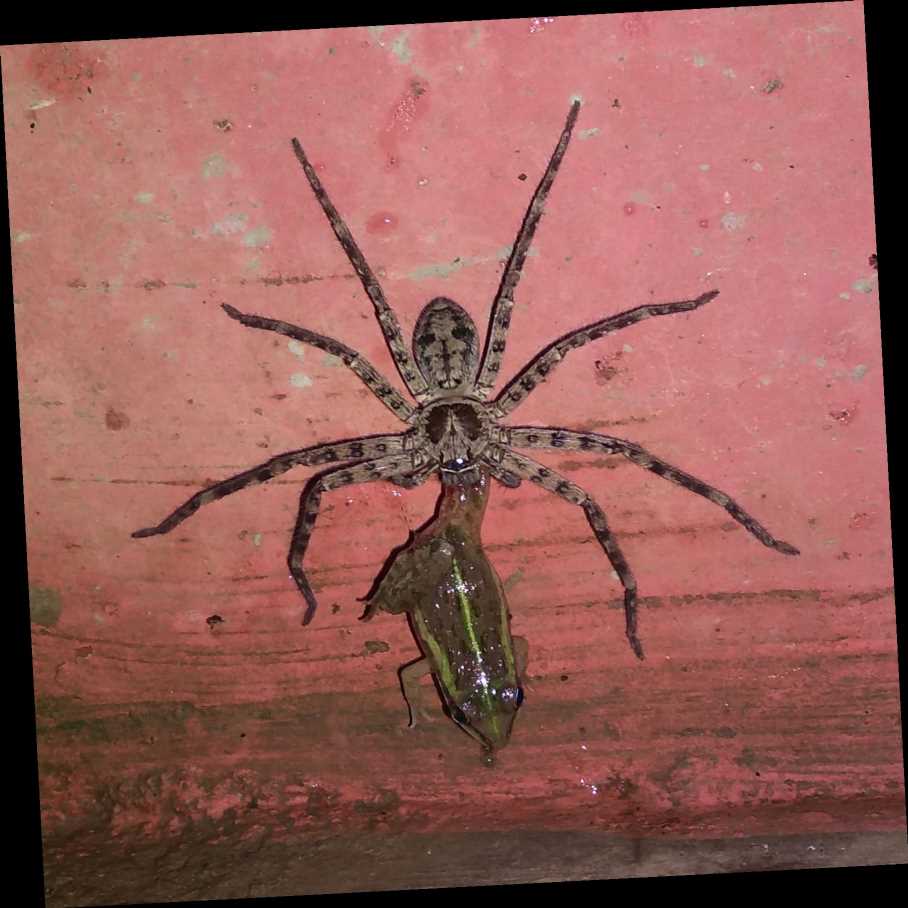 THIS is the stomach-churning moment one of the world's biggest spiders drags away an unfortunate frog for dinner in a shocked man’s bathroom.

Sujay Shah, 25, recorded the bizarre encounter at his home in Jalpaiguri, India, where he found the duo locked in a life-or-death struggle. 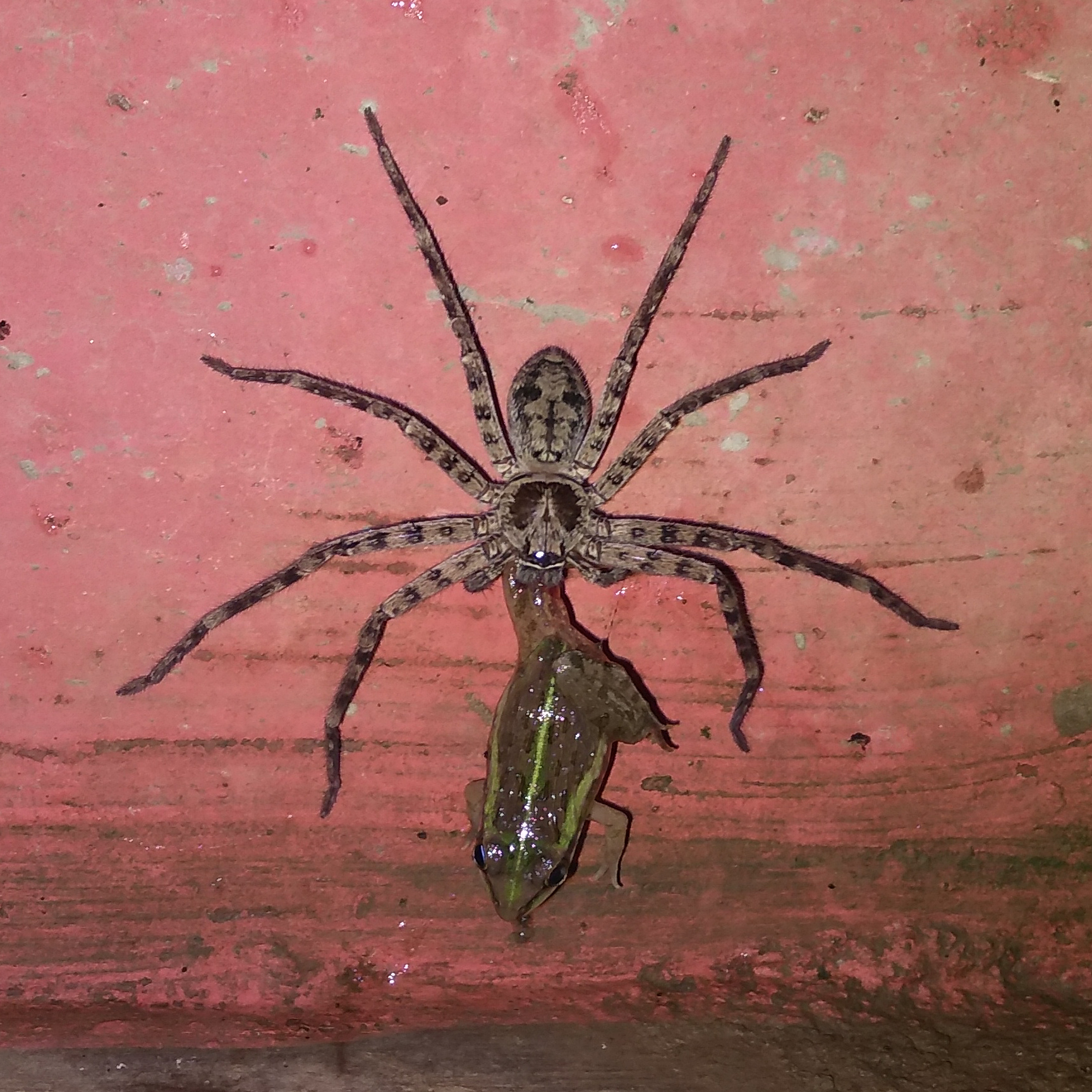 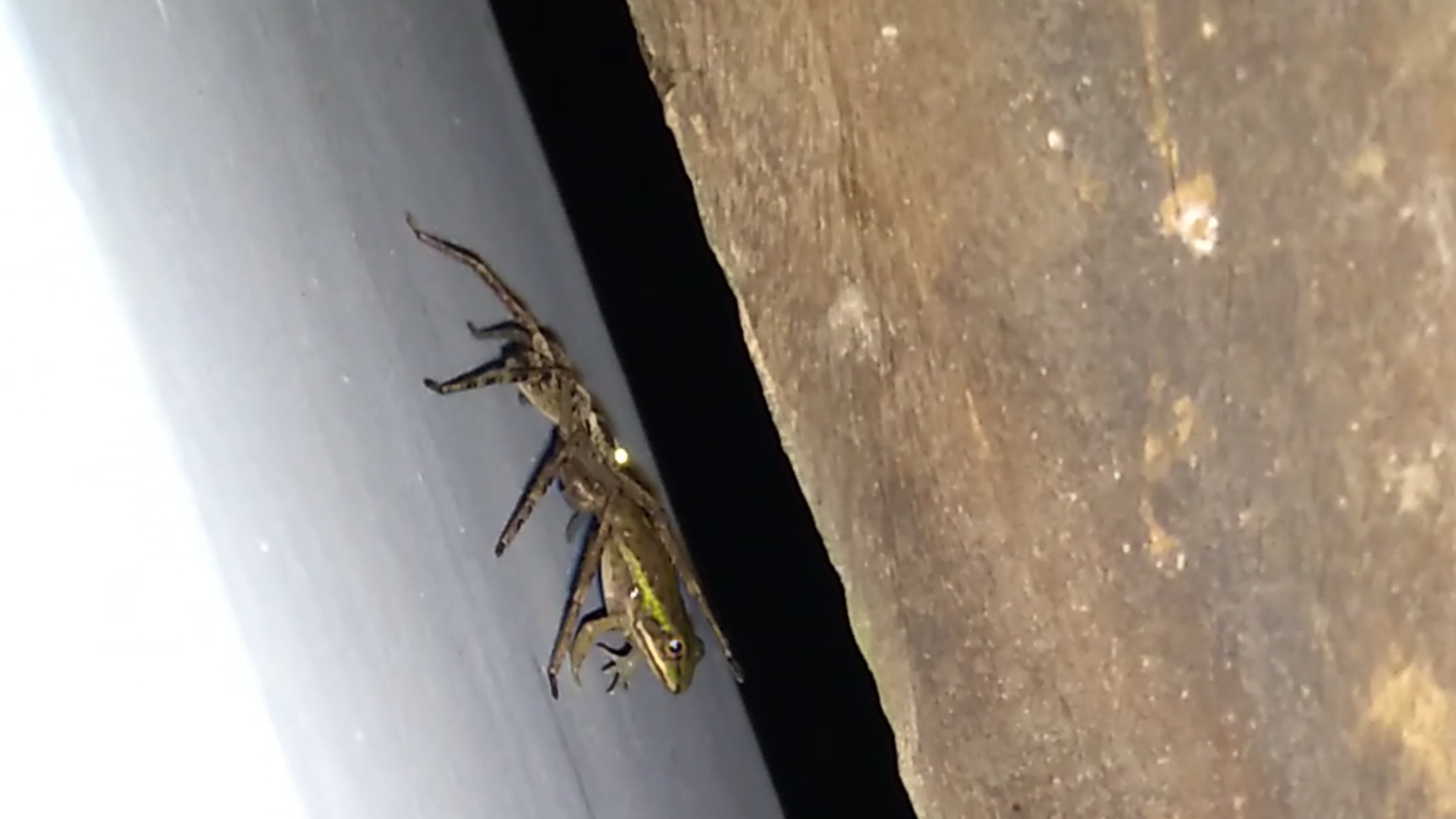 The science student and nature-lover was left stunned at the unusual spectacle.

"I was very happy and excited because I knew I was witnessing a relatively rare event of nature," he said.

Jason Dunlop and Peter Jäger, arachnid experts from the Berlin Natural History Museum and the Senckenberg Research Institute respectively, agree it was a huntsman spider.

Dr Dunlop said: "In general, large spiders can and will eat small vertebrates like frogs, birds, mice, lizards and even snakes if they get the chance.

"Only the largest spiders do this with any regularity – and huntsman spiders can get quite big.

"But this doesn't happen often – most spiders eat insects most of the time and none of them are specialist frog eaters."

Huntsman spiders are renowned for their enormous size – up to a span of 30cm.

They live in warm tropical climates across the world in places such as Australasia, Asia, Africa, the Americas, and the Mediterranean Basin.

They are common in Australia but have been introduced accidentally to parts of the US, Pakistan, India, China, and Japan. 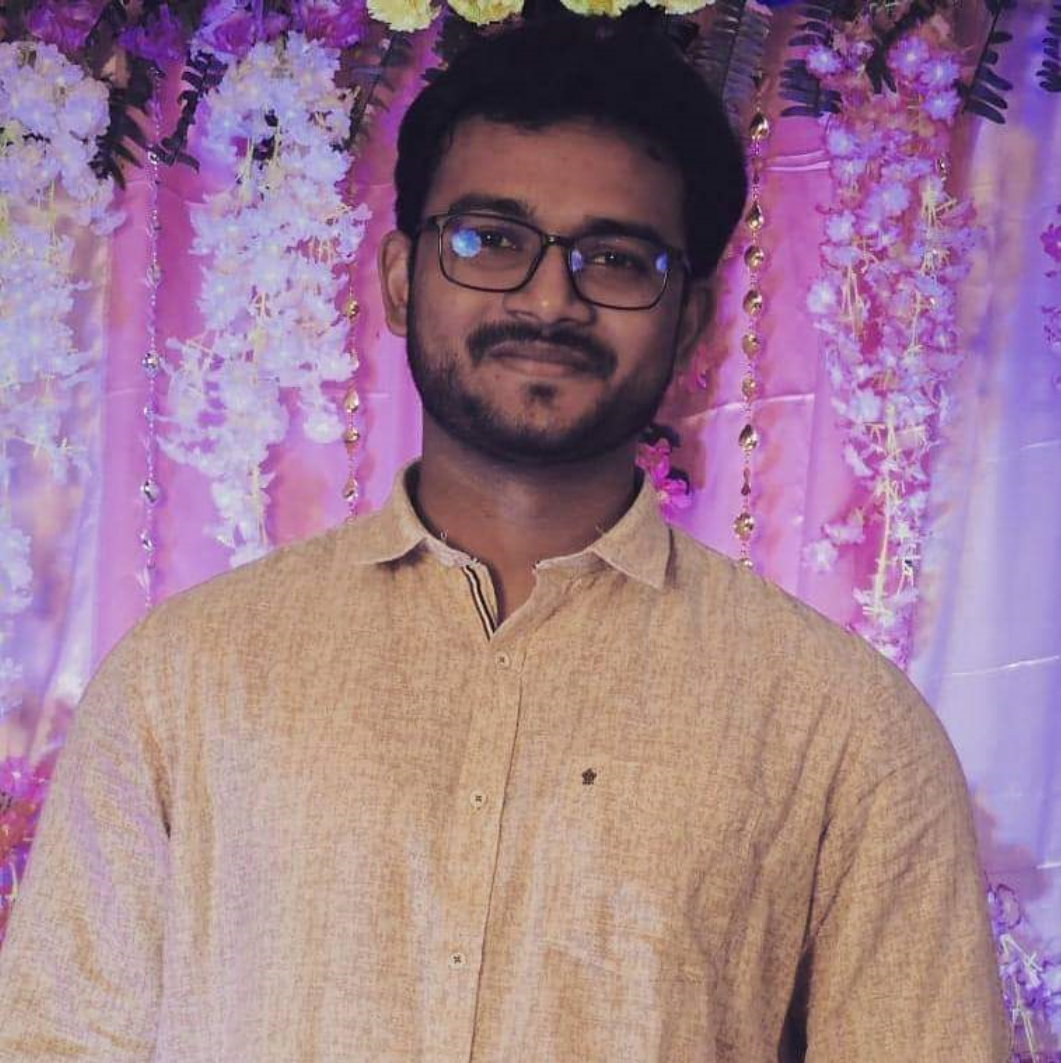 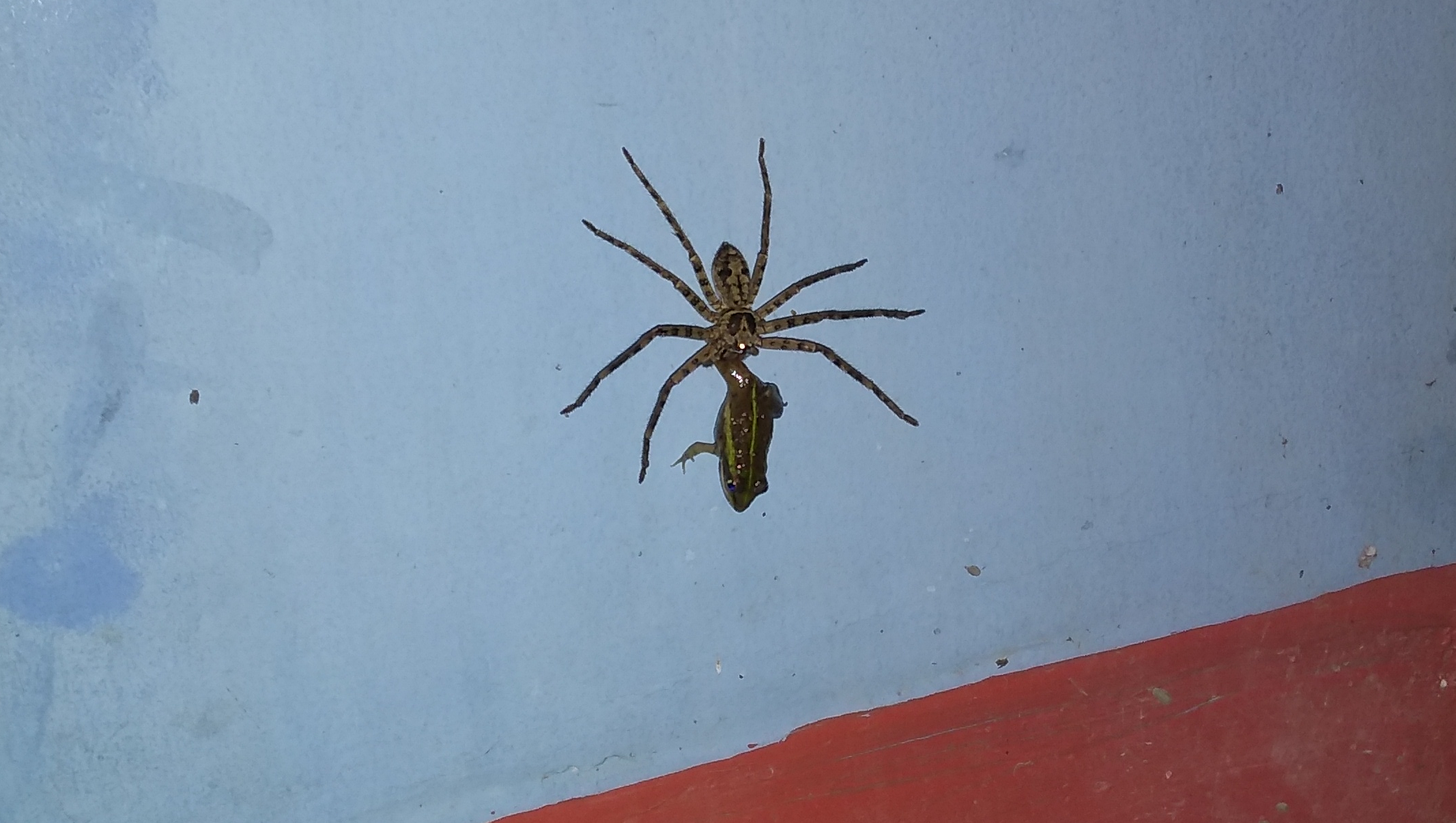 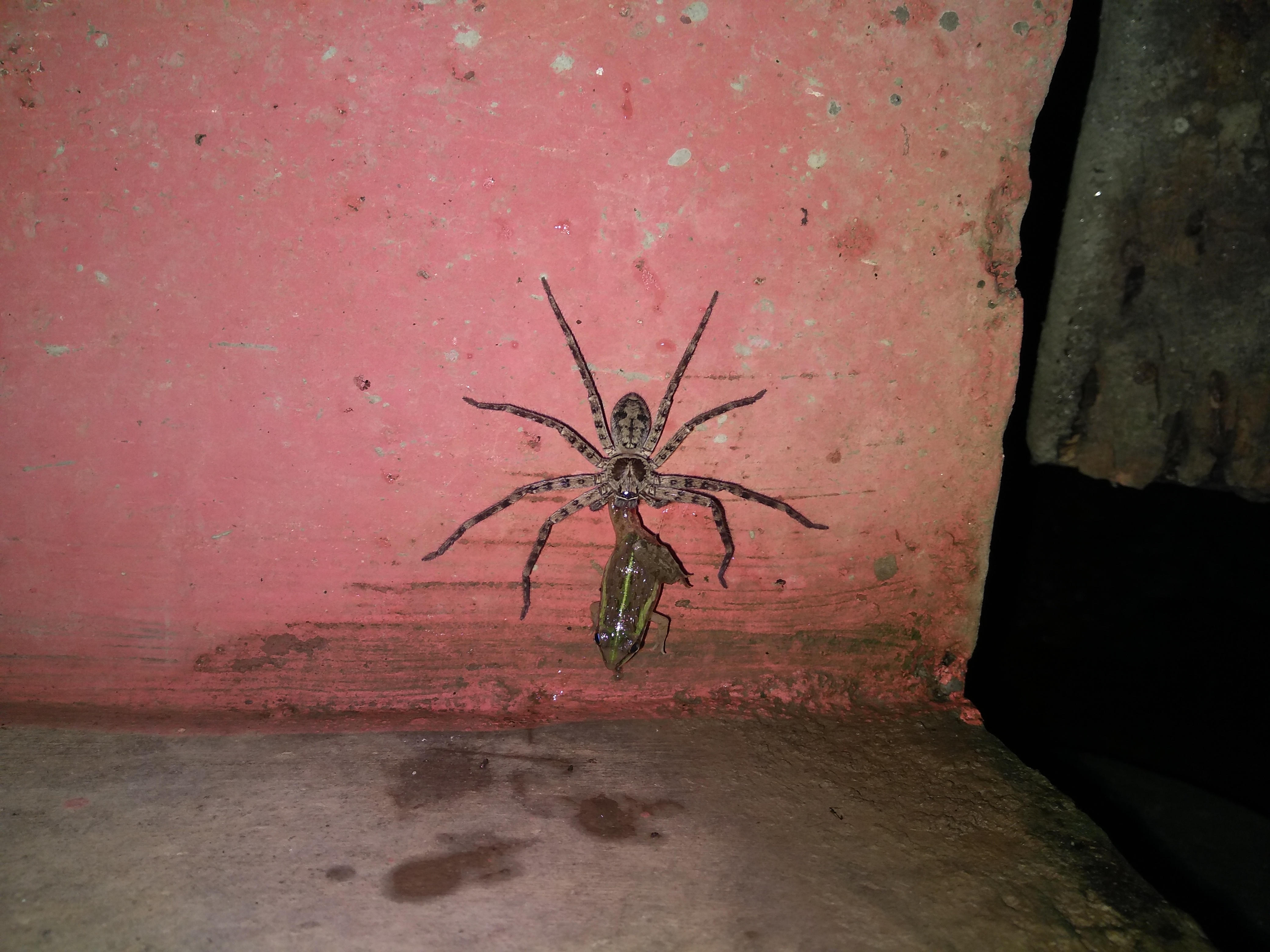 In Mr Shah's footage, the spider's eight eyes can be seen glowing in the dark as it carries its frog-dinner off.

The student said that, after watching for a minute, he left so that nature could take its course.

He said: "I left the place after a while, and when I came back after an hour, it was gone.

"I didn't want to interrupt it. I hope it enjoyed its meal."

And, however scary such a spider might be to some, he thinks it's better to leave it in peace.

"I've seen people tend to kill spiders and other insects because they're 'scary' or maybe some people are scared of venomous insects," he said.

"I think we should stop this practice of harming what we don't like or harming something without knowing much about it."

Described as an arachnophobe’s nightmare and an arachnologist’s delight, huntsmen spiders are roaming hunters.

Of the world's larger spiders, it is only the huntsmen which can nimbly run up sheer vertical surfaces, says the Queensland Museum in Australia.

"To those who find them beautiful, they are welcome house guests: catching household pests in their evening wanderings, eyes sparkling in torchlight," the museum says.

They like sheltering in crevices such as under loose bark. 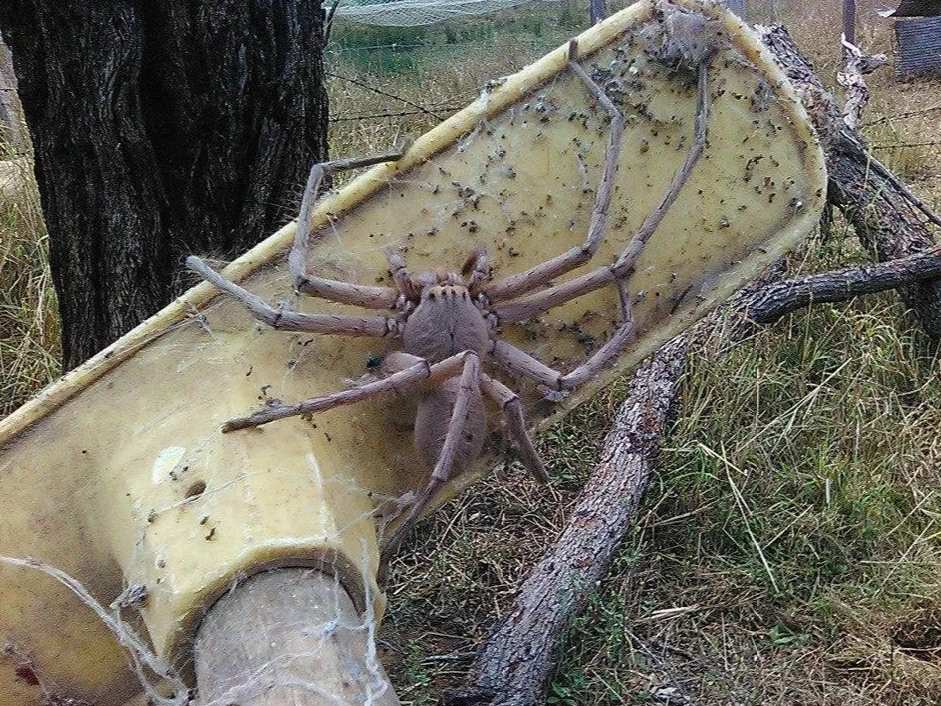 Hunstmen spiders crawl out at night, roaming across tree trunks and over the ground in search of medium-sized prey such as cockroaches,
caterpillars and moths.

The underside of the last joints of their legs and even the very tips of the feet, "bear a dense carpet of hairs.

"These hairy feet have a superb grip upon surfaces and upon prey," the museum adds.

In Australia, a huntsman spider was seen dragging a dead mouse up the side of a fridge.

Photos of a terrifying huntsman spider took the internet by storm in 2016, after the critter was found on a farm in Queensland, Australia.

And people's fears were reignited after a monster spider the size of a dinner plate went on the loose in a terrified couple's home in Queensland, back in 2017.

What are Huntsman spiders and how big do they get?

Of the world’s larger spiders, it is only huntsmen that can nimbly run up sheer vertical surfaces.

Huntsman spiders are renowned for the enormous size, with males able to achieve a leg span of between 10 and 12 inches.

They live in warm tropical climates across the world in places such as Australasia, Asia, Africa, the Americas, and the Mediterranean Basin.

They are common in Australia but have been introduced accidentally to parts of the USA, Pakistan, India, China, and Japan.

Adult Huntsman spiders do not build webs but forage for food.

Their diet mainly consists of insects but they are also known to eat small reptiles such as skinks and gekkos.

Huntsman spiders use venom to stun their prey and to aid in digestion.

These huge spiders are members of the Sprassidae of which there are more than 1,000 species. 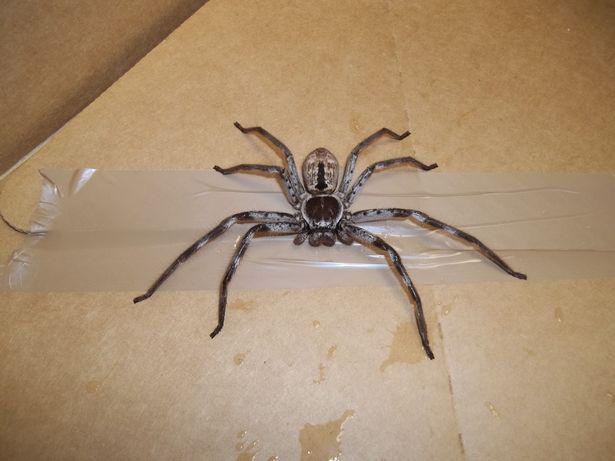 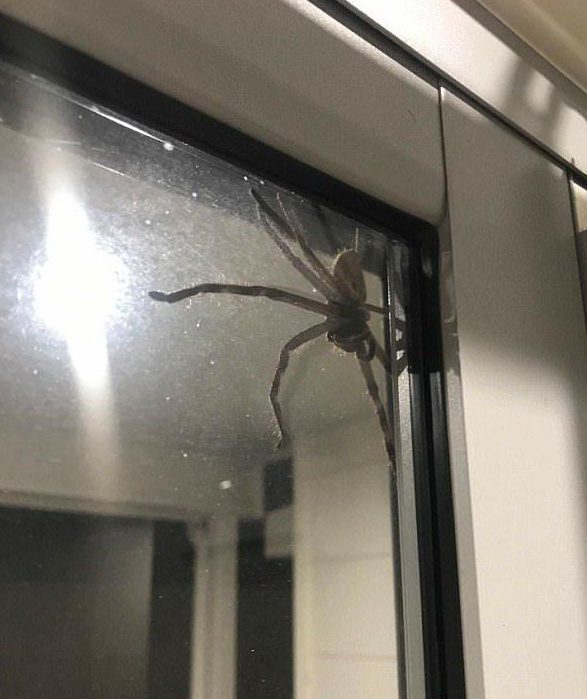