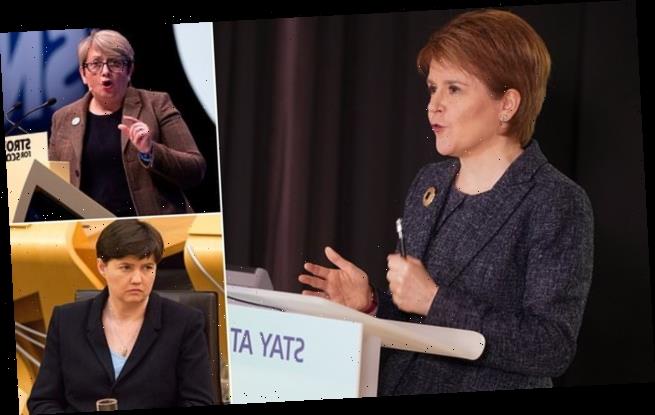 Nicola Sturgeon could allow Scottish students to return to school weeks before those in England after her top medical adviser said it was safe for them to go back.

Professor Jason Leitch claimed ‘progress’ is being made against the coronavirus and he has recommended to the SNP Government that younger children can return.

At the last review on January 19 the Scottish Government said the earliest date schools could possibly open for pupils who are not vulnerable or children of key workers was being pushed back to at least mid-February.

In England, schools are not expected to reopen until March 8 at the earliest, with scientists casting doubt today on even that target.

It came as Ms Sturgeon prepares to introduce a tough new policy on international arrivals that goes further than the one announced by Boris Johnson last week.

In what is seen as an attack on the Prime Minister she is set to say that his plan to force hotel quarantine on arrivals from ‘red list’ nations is not strict enough.

But her plan to force all travellers from abroad – including returning Brits –  into quarantine sparked accusations that she was seeking to divert attention from Scotland’s stuttering vaccination campaign.

Scotland is lagging behind the rest of the country, as Government data revealed another 322,000 vaccines were dished out across the country on Sunday.

Ms Sturgeon was also dragged into a bitter internal SNP row after MP Joanna Cherry, a close associate of former party leader Alex Salmond, was sacked from its frontbench team in Westminster.

Ruth Davidson, the Conservative leader at Holyrood, said: ‘As yesterday saw a new low for vaccinations and Scotland officially having the lowest rate of any of the nations and regions of the UK, the dead cat strategy is enacted.

‘Watch all columnist rush to dissect the Joanna Cherry sacking, rather than SNP vaccine failure.’ 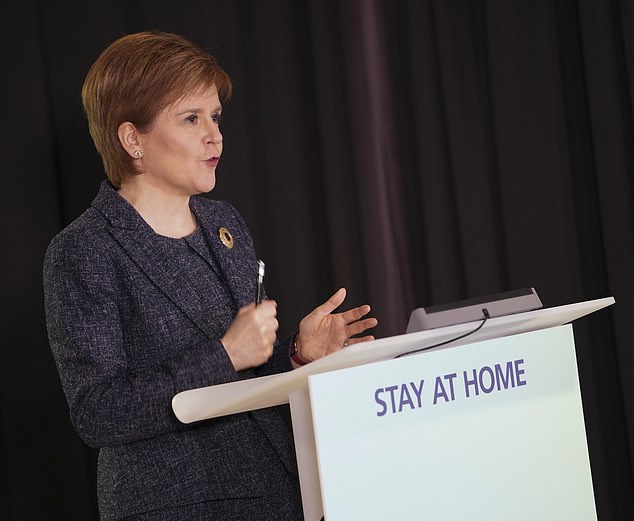 Nicola Sturgeon could allow Scottish students to return to school weeks before those in England after her top medical adviser said it was safe for them to go back. 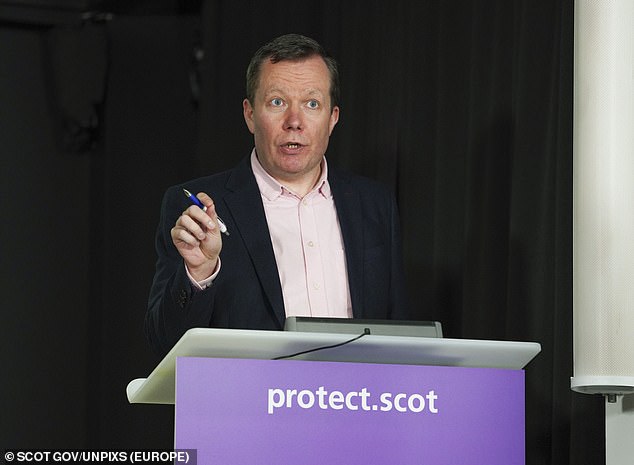 Professor Jason Leitch claimed ‘progress’ is being made against the coronavirus and he has recommended to the SNP Government that younger children can return. 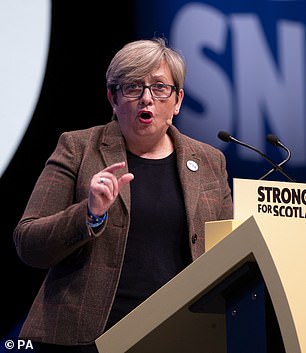 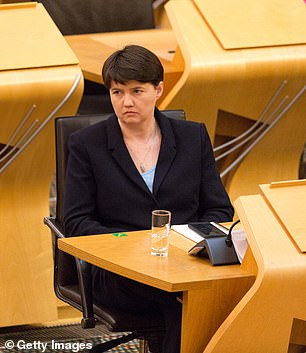 Ms Sturgeon was also dragged into a bitter internal SNP row after MP Joanna Cherry was sacked from its frontbench team in Westminster. Ruth Davidson, the Conservative leader at Holyrood, said: ‘As yesterday saw a new low for vaccinations and Scotland officially having the lowest rate of any of the nations and regions of the UK, the dead cat strategy is enacted’

Scotland’s top medic today said that Scotland’s slow vaccine rollout had been hindered by GPs whose surgeries are closed on Sundays.

Holyrood ministers have been accused of being too slow over the vaccination rollout in recent days, with opposition politicians saying the rest of the UK is moving faster.

Speaking to the BBC today Prof Leitch said ‘Sundays are a little bit tricky’ and that the vaccination team has been asked to ‘have a look at that’.

He added that the reason for the drop on Sunday was because of where the jabs are being administered, with most being delivered in GP practices which ‘didn’t all work (on) Sunday’.

Ms Sturgeon will update MSPs this afternoon changes decided by the Cabinet to the current restrictions in Scotland, which was forced into lockdown earlier this month.

National clinical director Prof Leitch told the BBC his recommendation to ministers is that younger children can return, although he is reluctant to say older pupils – who will be working towards qualifications – can do the same.

‘We’re heading in the right direction,’ he said.

‘I can break the secret – you definitely won’t see all of lockdown lifted, but there is progress and therefore you’ve got to think, as public health advisers, what is the first thing you should do? The most important thing is children.

‘That’s what we’ve trailed in the last few weeks that, if we can, we will get some kids back to school.’

At her daily press briefing yesterday she said today that Scotland had to ‘be ever more vigilant in trying to stop the virus coming into the country’.

‘To reduce the risk of the virus entering the country, as you know, we have already agreed with other countries across the UK to introduce supervised quarantine from some countries,’ she said.

‘However, as I said last week, in our view the current UK-wide proposals don’t go far enough so tomorrow we will provide some more information about the extent to which we intend to operate supervised quarantine here in Scotland.

‘We will also set out some additional measures we are working on to make current travel restrictions more effective than they are already.’ 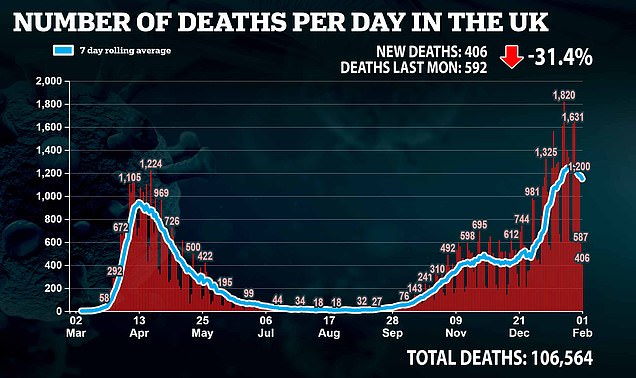 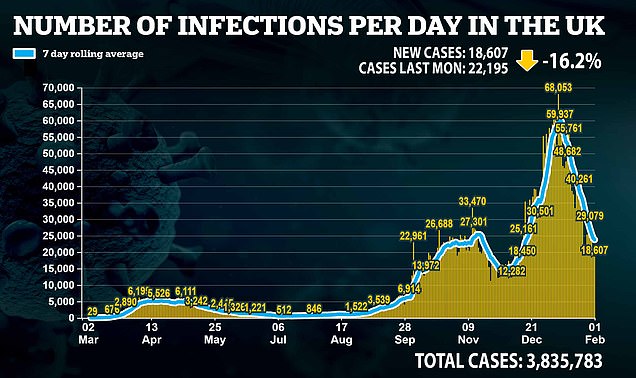 The SNP was in uproar today after the sacking of prominent Remain campaigner Ms Cherry.

Widely tipped as a future SNP leadership challenger to Nicola Sturgeon and an ally of previous leader Alex Salmond, the barrister said she had been removed from her role despite ‘hard work, results & a strong reputation’.

The QC, who has been involved in an internal party row over gender recognition and trans rights, delivered a parting shot as she said the SNP needs to ‘radically rethink our strategy’.

The move was announced by Ian Blackford, the SNP’s Westminster leader, as part of a wider reshuffle as he said ‘team working and cooperation are key to ensure results and this reshuffle will give us a strong team to take us forward’.

The decision to sack Ms Cherry prompted a furious backlash from supporters as fellow SNP MP Kenny MacAskill tweeted: ‘This is the leadership’s call but many of us find this inexplicable and harmful to our cause.’

An official reason for removing Ms Cherry from the frontbench was not given by the SNP amid speculation that it could have been because of the trans rights row or because she is viewed as a leadership threat to Ms Sturgeon.

‘It’s been well known that Jo and Nicola have not been getting on well for a long time,’ they said. ‘Ian Blackford was the willing stooge to wield the knife. There is no way this would have happened without Nicola Sturgeon. Not a chance.’

Meanwhile, an SNP source claimed to the New Statesman that the dismissal was for ‘continued gross disloyalty’.