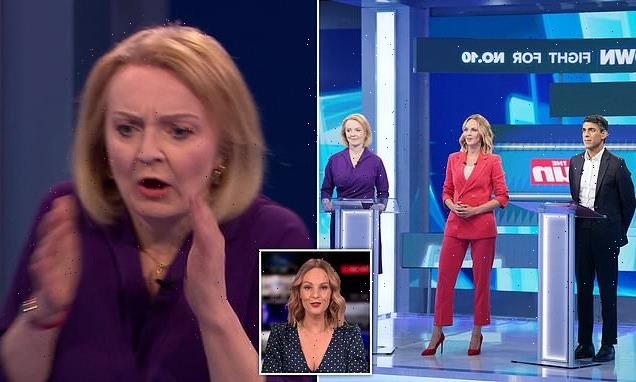 ‘Yes, I had eaten’: Talk TV anchor Kate McCann reveals what really happened when she fainted at the Tory leadership debate between Liz Truss and Rishi Sunak

TalkTV anchor Kate McCann has revealed what happened when she fainted during a Tory leadership debate between Liz Truss and Rishi Sunak.

The showdown between the Foreign Secretary and ex-chancellor earlier this week was taken off air after around 30 minutes in and subsequently cancelled on the advice of medical experts present at the studio in Ealing, west London.

The dramatic moment took place as Ms Truss was answering a question, when a loud noise caused the clearly worried leadership hopeful to hold her face in shock.

Writing for The Sunday Times, McCann told how when she had collapsed she toppled into the lectern and hit her head on the glass before the floor.

She said: ‘Colleagues who heard the thump, but couldn’t see what happened, thought a light had fallen from the ceiling and hit me; others wondered if protesters had burst in.

‘Between coming around and my brain finally rebooting itself, the studio had filled up with worried faces. I remember asking how long we’d been off air and knowing the answer I was given was a kindness, not the truth.’

Ms McCann said she had wanted to get back up but was told it was not a good idea.

She added: ‘I have fainted before, years ago. This was certainly far more public. And yes, I had eaten. 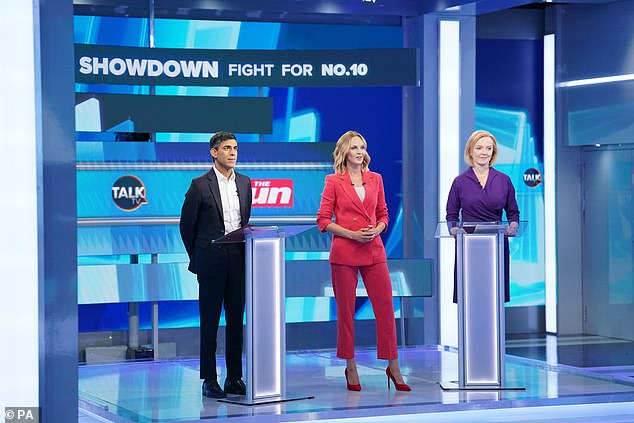 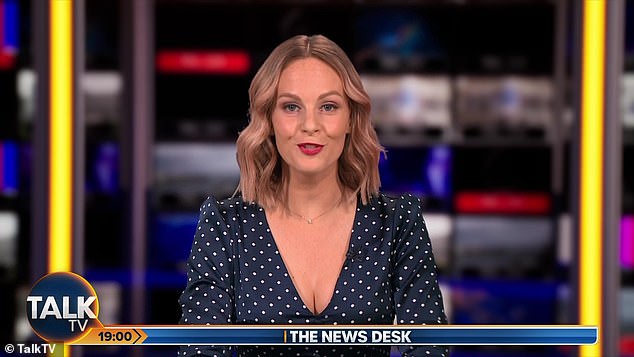 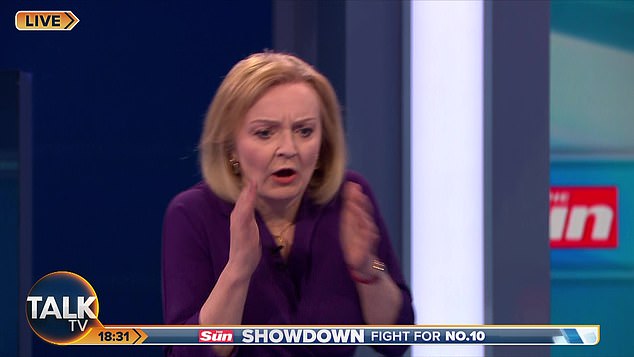 A loud noise caused a clearly worried Liz Truss to hold her face in shock, before it was revealed that McCann had fainted

‘Another wise friend who presents big TV shows admitted they sometimes feel faint on air too so keep jelly babies close by just in case. Someone produced a pot of them on Tuesday night, an industry secret I wish I had known sooner.’

The broadcast feed was swiftly cut, with viewers shown the message: ‘We’re sorry for the disruption to this programme. We’re working hard to fix the issue and will return to normal programming soon.’

There was a long pause in the broadcast while viewers wondered what had happened in the studio, before a ‘medical issue’ was cited as being the cause of the disturbance.

McCann said there had been ‘no warning signs’ prior to the incident other than normal ‘good heart-hammering nerves’ when the debate went live.

She added: ‘The last thing I remember is thinking “this next question is going to be the one” and for the first time in 30 minutes of debate, allowing myself to relax.

‘Then suddenly my body wasn’t where it was supposed to be and someone I couldn’t see was asking me my age.

‘I couldn’t work out why anyone would need to know that in the middle of a discussion about Ukraine and I remember thinking how rude it was for either candidate to ask.

‘Then came the creeping sense of panic as my brain started to catch up with my body, which wasn’t at the lectern facing Liz Truss and Rishi Sunak, the Conservative leadership candidates, but on the floor of a television studio surrounded by faces I didn’t recognise.’

McCann said she is feeling a ‘little embarrassed’ and a ‘little bruised’ upon her return to the studio the following day to host The News Desk.

Filling in as planned for regular presenter, Tom Newton Dunn, she joked ‘after all the excitement from last night’s leaders debate, thank goodness I’m sitting down’. 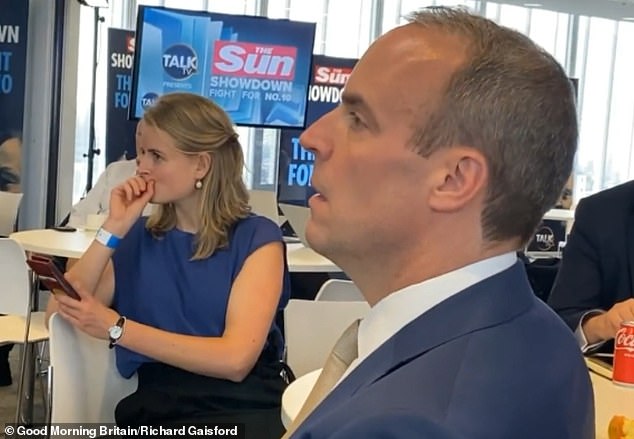 And the production team had hidden a chocolate bar and two bags of Skittles underneath her desk as a precaution, she has revealed, while her coffee cup was also filled with Coke.

McCann said Ms Truss’ shocked reaction was ‘as you hope we all would’ and allowed viewers to have a glimpse of ‘the real person’.

She added: ‘I only wish it was my questioning, not passing out, that had revealed it.’

Ms McCann, who left her role as political correspondent at Sky News to join TalkTV as its political editor in January, is a highly popular figure among Westminster journalists, and considered a ‘rising star’ in her industry.

The presenter, who is in her early thirties, graduated from Newcastle University in 2009 with a degree in Politics, and after a short stint as a parliamentary researcher joined the Guardian.

Among her other achievements, Ms McCann was chair of the Press Gallery in 2018. She was only the second woman to hold the title in over 200 years.