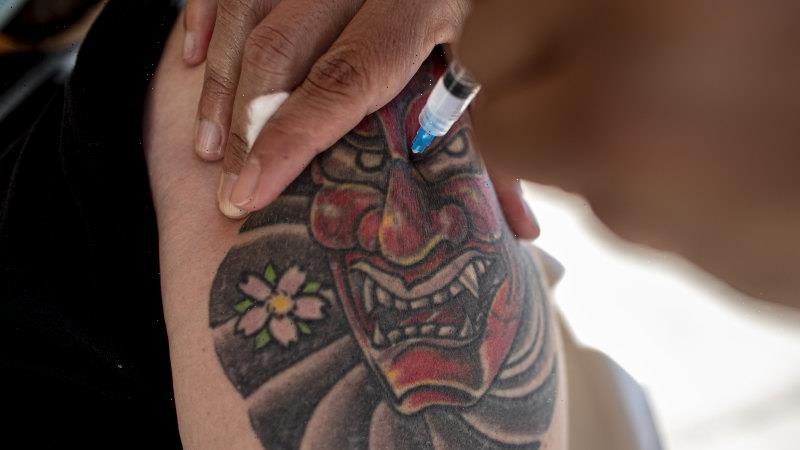 Brussels: Tattoo parlours say their art will lose a lot of its vibrancy after European Union rules banning thousands of chemicals in their colouring ink kick in on Wednesday. But the 27-nation bloc says public health will be much better served with tougher restrictions on ink elements that may cause cancer or allergies.

The stand-off between regulation and freedom of artistic expression has triggered a torrent of complaints and accusations. 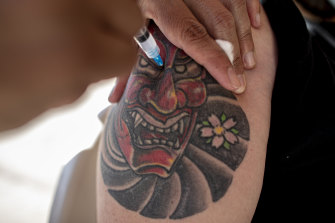 Among the chemicals the European Union is banning in tattoo inks is one used to create black, the most popular colour. Credit:AP

In Amsterdam, Tycho Veldhoen has plied his trade for a quarter century and fears an “enormous impact” on his work once certain colours are banned. “Because, like a painter, you suddenly lose a gigantic part of your palette” with no alternatives in sight.

And he warned it could even get worse next year when more inks currently in use may be banned. Tattoo shops in Europe have had a rough two years since COVID-19 brought restrictions and lockdowns. Now they say a perfectly avoidable crisis is hitting them even harder.

“It is all rather sudden,” Veldhoen said. “There should have been a lot more preparation.”

The EU begs to differ. The bloc says the consultation process began in 2016 while the official regulation heralding Wednesday’s start of restrictions dates back to December 14, 2020.

“So this is not something which is either a surprise or a complete novelty. It is a sort of generalisation of practice which is already existing in quite a few member states,” said EU spokesman Eric Mamer. Seven EU nations already had national restrictions. 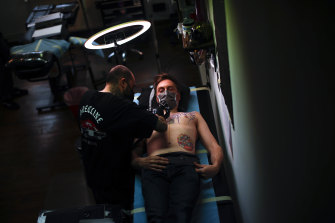 Tattoo parlours in Europe have endured a rough two years during the pandemic. Pictured, Paul and Friends tattoo parlour in Brussels, where customers wear face masks while they’re worked on. Credit:AP

The European Commission says alternatives to the banned products do exist but tattoo parlours say they’re too slow to come from the manufacturers to their shops.

Angelo Bedani of Brussels’ Boucherie Moderne tattoo parlour said he had nothing to prepare with since the new inks had only become available a week ago. On top of that “a bottle costs double compared to the one we have today”.

At least 12 per cent of Europeans have tattoos, double that number in the 18-35 age group, according to EU figures. In Germany, like Australia, as many as one in five people are estimated to have a tattoo.

The EU’s chemical agency ECHA says that allergic and inflammatory skin reactions “are expected to decrease thanks to the restriction”. It adds that “more serious effects such as cancer, harm to our DNA or the reproductive system potentially originating from chemicals used in the inks could also decrease”.

Around 4000 chemicals will now be banned, including isopropanol alcohol, which is used in many tattoo inks, and polycyclic aromatic hydrocarbons, which are found in the most common tattoo colour, black.

A 2016 report found one in five tattoo inks in use in Australia contained carcinogenic chemicals. Only four tattoo inks out of a sample of 49 submitted for chemical analysis by the national regulator that year complied with European standards. Some inks contained barium, mercury and copper.

Queensland last year proposed bans on potentially carcinogenic tattoo inks, but withdrew its draft laws after local artists said it would be impossible to comply with new standards.

Further restrictions will be introduced in a year’s time. The EU has given a grace period to two common colours, blue and green, to allow time for alternatives to be found.

Michl Dirks, who is behind a “Save the Pigments” petition which has already collected 176,000 signatures in the EU objects to such conditional phrasing and insists the ban is not sufficiently backed by science, something which the EU disputes.

Erich Maehnert, another organiser of the petition, said such bans unduly hurt the industry since people will use illegal ways to get the products from third countries.

“They continue to obtain their tattooing products without any checks and without the possibility of tracing them,” he said. Others say the small tattoo industry is easily targeted while the tobacco and alcohol industries still hold much more sway.

Veldhoen said it leaves him with awful choices when a customer will walk into his Amsterdam shop. “A rose with brown leaves is a lot less attractive than a rose with green leaves,” he said.