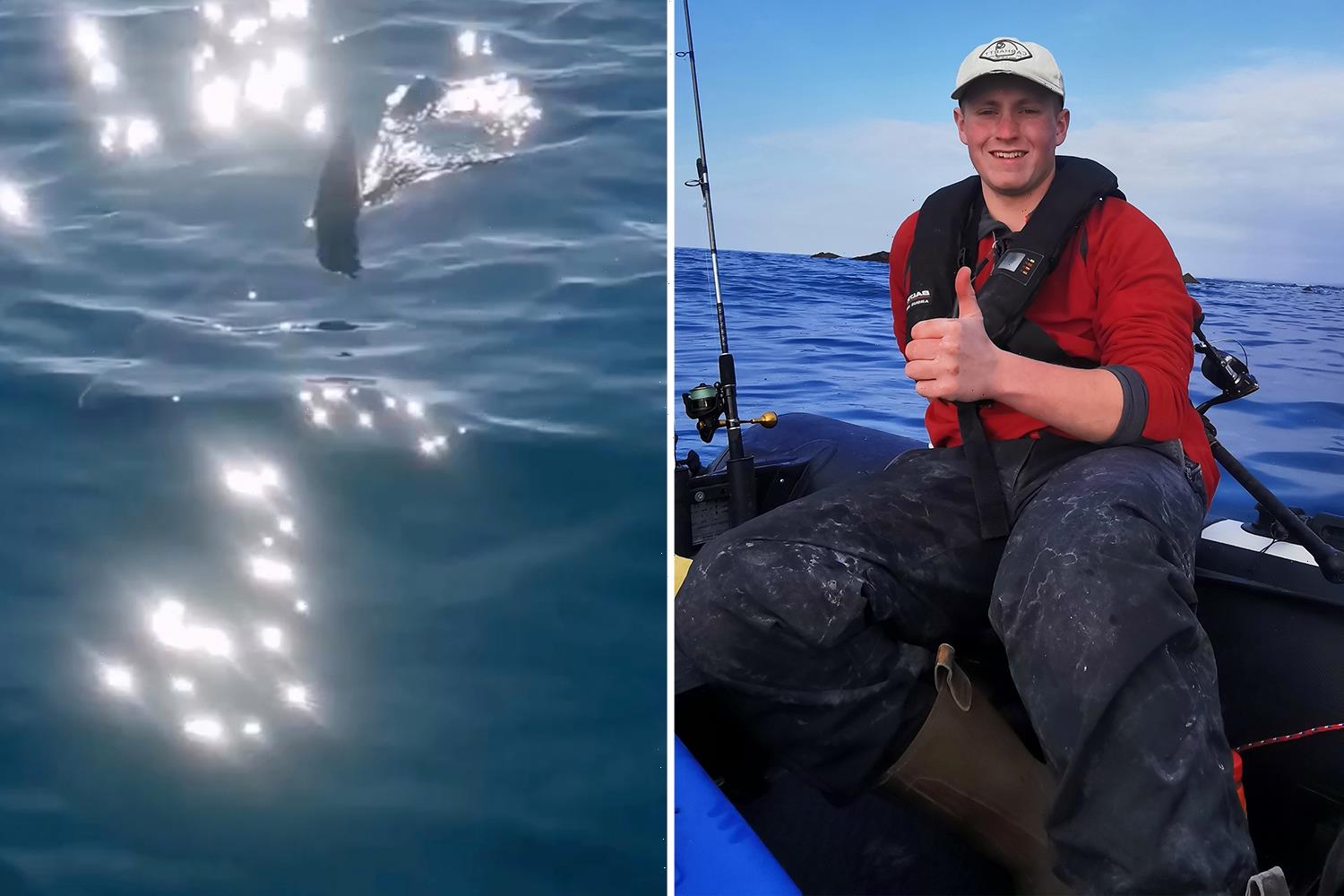 THIS is the terrifying moment a huge shark which has been known to attack humans circled a fisherman’s tiny boat.

Oban Jones was bobbing about in a small vessel a mile off the coast of Cornwall when he spotted a dorsal fin in the water. 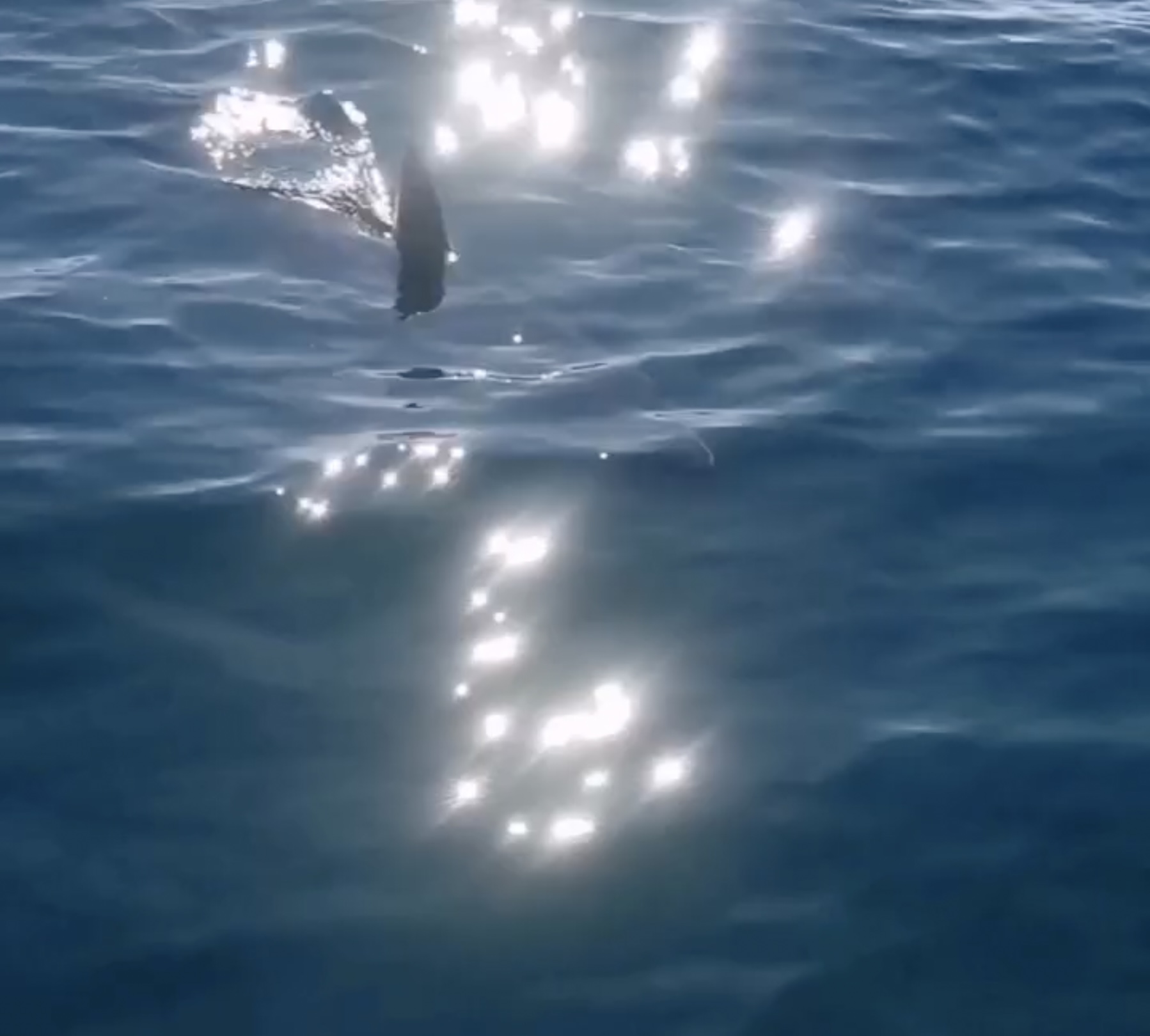 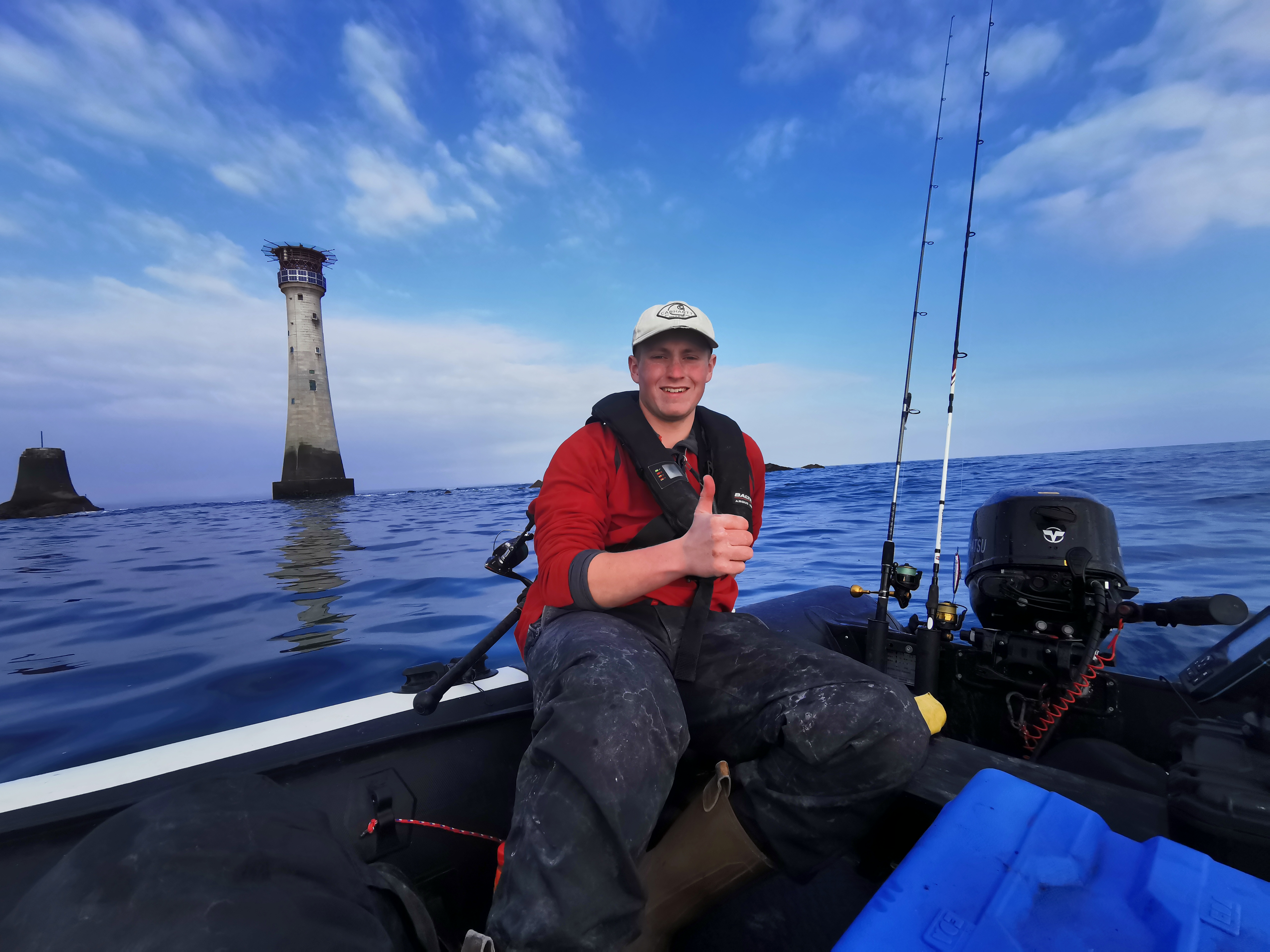 Alone at sea, the 21-year-old filmed the incredible encounter as the 6ft Porbeagle shark zipped around his boat.

Oban’s hair-raising footage shows the huge shark swimming inquisitively around him, just below the surface of the water.

The keen fisherman, who works in marine technology, was caught between awe and terror as the rare shark swam up to see him.

In the clip, he says: “Well, I don’t know what to say right now, but that right there is a big shark and I’m in a very, very small boat.

“Wow, Porbeagle shark, north coast of Cornwall, that’s amazing. I don’t know if I should be terrified or feeling very lucky to see this.”

The encounter happened about a mile north of Trevose Head lighthouse in Padstow, Cornwall on Sunday.

The shark swam off and Oban got back to shore safely.

After reflecting on the amazing experience, he said: “It was a perfect day to be at sea even in a small boat such as mine. 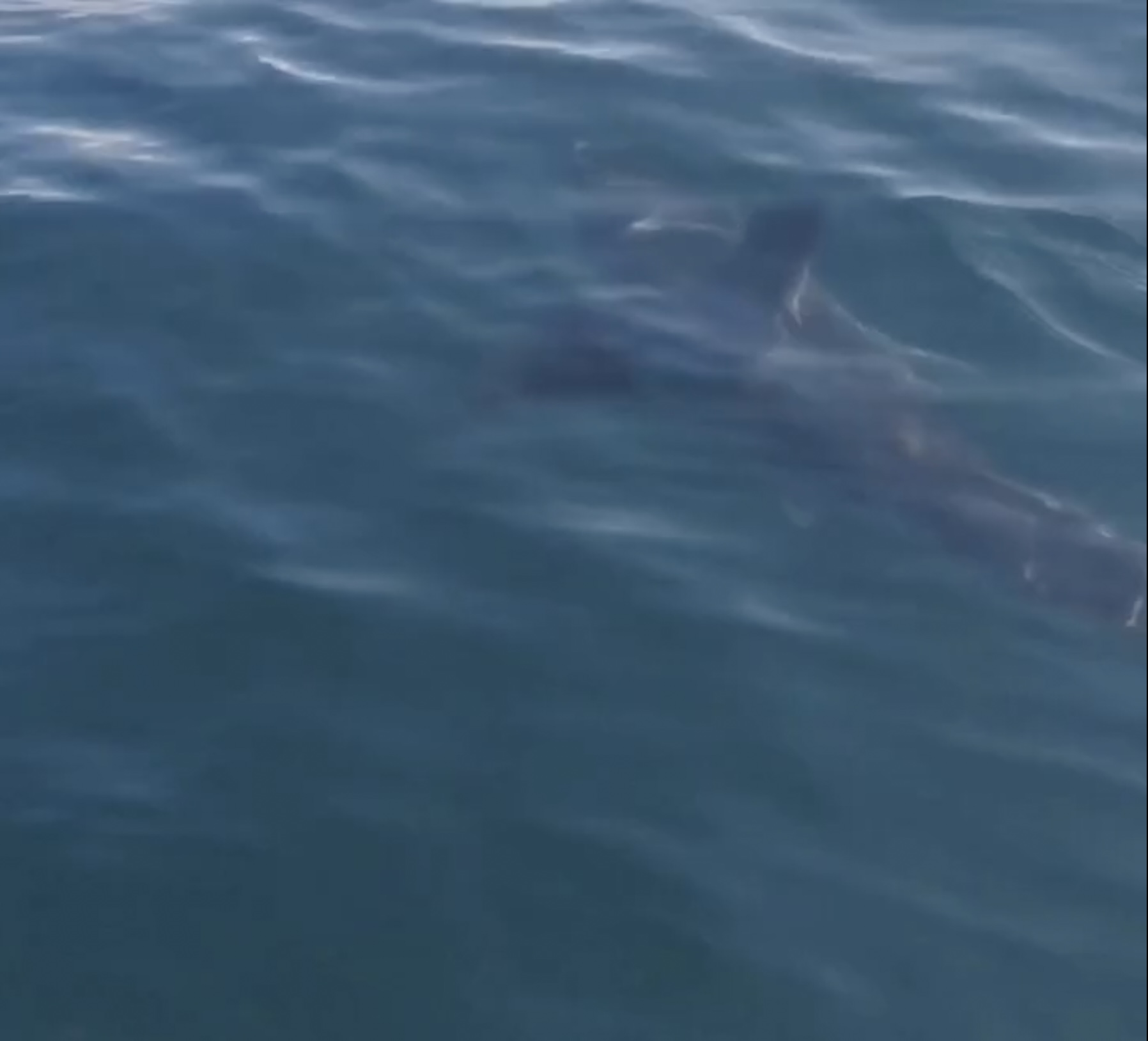 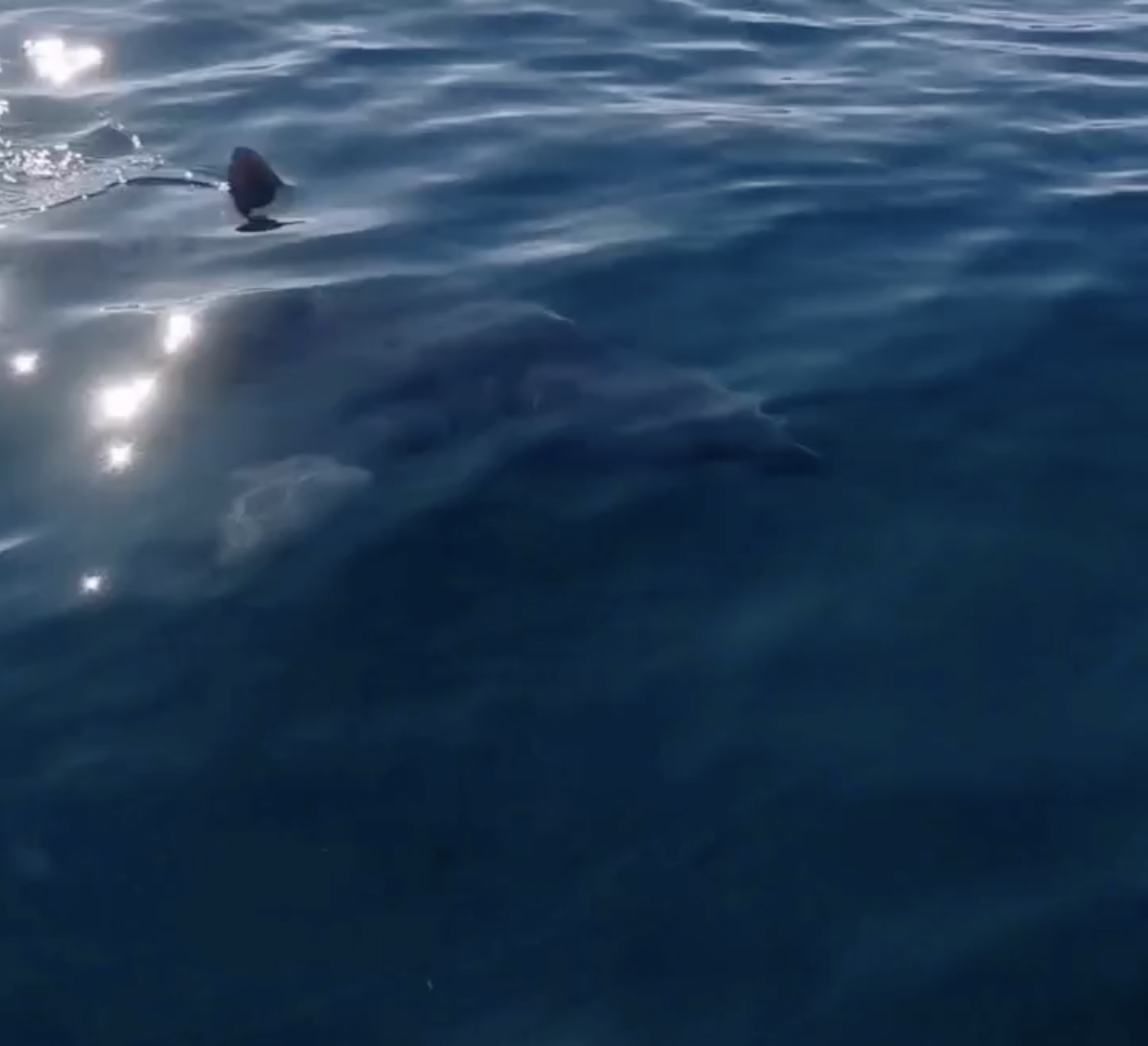 “The sun was shining and there wasn’t a breath of wind. A light swell was rolling in from the Atlantic.

“I had just finished unhooking a bass I had caught on a nearby patch of reef when I noticed a large dorsal fin approaching the vessel at a fair pace.

“At first I was slightly confused, after all it did not resemble the typical marine life I was used to encountering such as seals, dolphins and sunfish.

“The dorsal fin continued to approach and it soon became clear that this was something rather different and special, a Porbeagle!

“The shark began to circle my SIB slowly showing signs of curiosity.

“My initial reaction was of disbelief as nothing like this has ever happened to me in my time at sea.

“I soon focused on getting a good look at the magnificent creature just feet away from me. I was experiencing a mixture of excitement and adrenaline.

“At first I was a little cautious of such a large toothy creature being so close to my small inflatable boat but I reminded myself that the Porbeagle shark feeds exclusively on fish and poses no harm to humans. 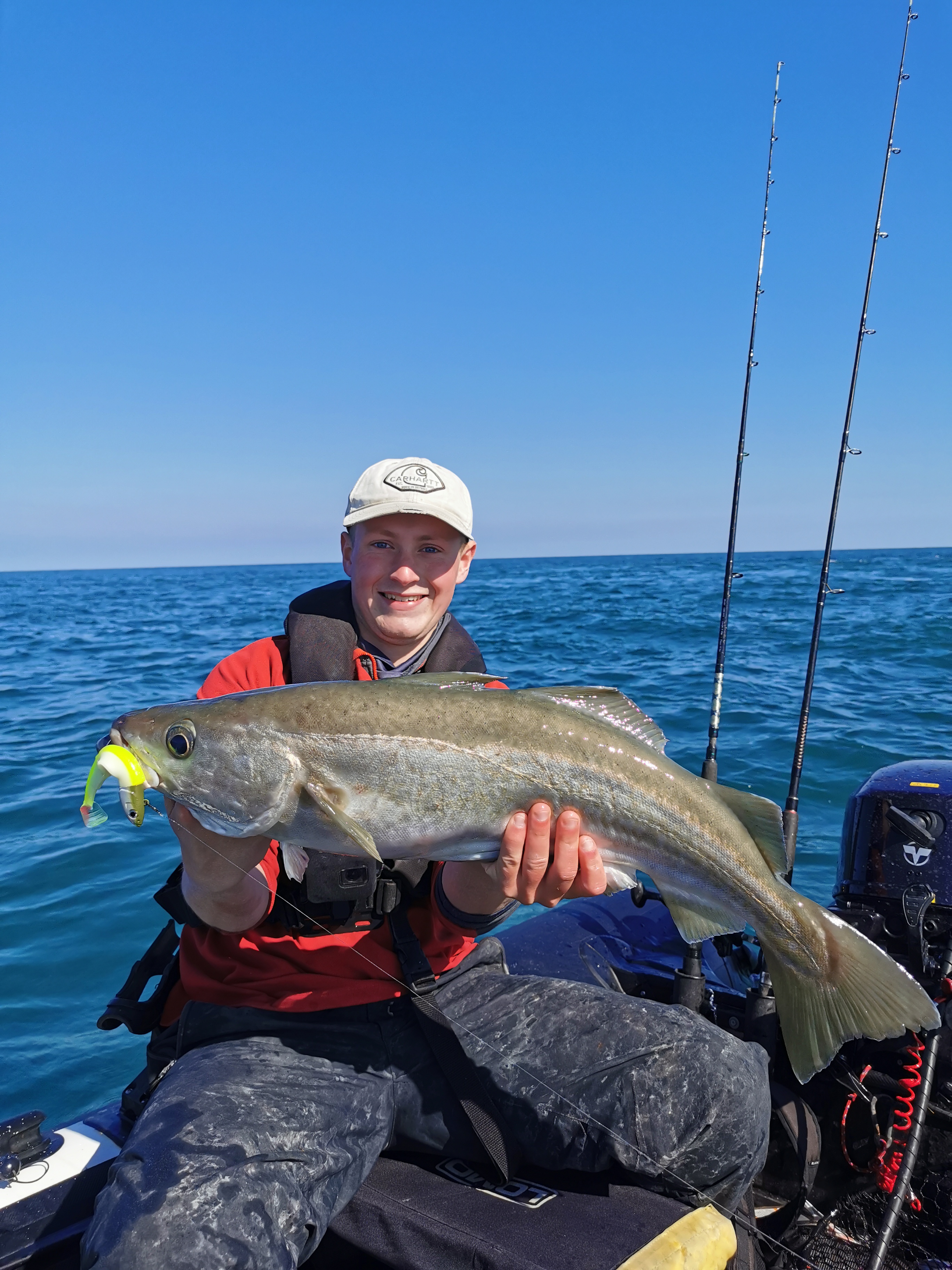 “I continued to spectate at the marvel of the animal's curiosity before it swam away into the deep blue leaving me feeling rather lucky.”

Porbeagles are a species of mackerel sharks and can grow up to 6.6 feet long and weigh as much as 135kg, and can live to 46.

The sharks, which are considered to be vulnerable to extinction, have reportedly only bitten swimmers or boats on a handful of occasions.

International Shark File records there as having only ever been two Porbeagle attacks on humans, both non-fatal and non provoked.

But the people who reported these attacks may have mixed them up with other similar looking species.

In May 2018, the BBC reported that a Porbeagle bit a fisherman off the coast of Cornwall as it was being returned to the sea.

Oban, who started fishing when he was four, added: “I have always been drawn to the sea and the tranquility it provides.

“I am fortunate enough to be surrounded by a stunning coastline which I love to explore on foot or by SIB taking in the amazing scenery, sea life and if I’m lucky, dinner!”

“I put a lot of time and effort into chasing the rich variety of fish in the waters of Cornwall.

“My most notable catches include a bass estimated to be close to 20lb, this is only an estimate as the fish was released as with all large bass that I catch to preserve the breeding stock.”

He regularly fishes for pollock, plaice, bream and cod.

Oban posts about his fishing adventures on his Youtube page: Oban on the water.

The sighting comes after officials in Australia were mocked for calling ‘shark attacks’ either ‘interactions’ or ‘negative encounters’ so the animals could be more understood.