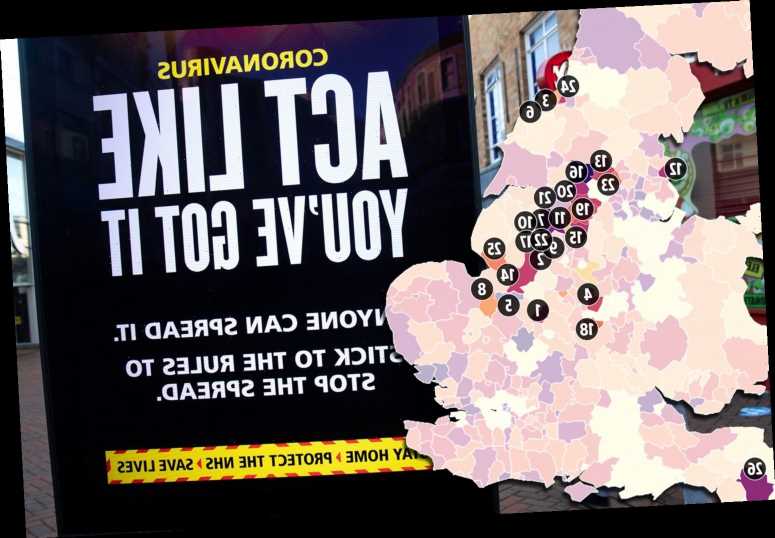 CORONAVIRUS infections are still rising in 26 areas in England and this interactive map reveals how high case rates are in your local area.

Official data from Public Health England (PHE) shows that cases have fallen in 289 places (92 per cent).

The data accounts for the seven days up to January 22 and shows that just nine per cent of areas have seen a rise in cases.

The most infected area in the country is Knowsley in Merseyside, which recorded 1,330 new cases in the seven days to January 22, the equivalent of 881.6 cases per 100,000 people.

While infection rates in areas that have high case loads seem to be falling, infections are still rising in 26 areas, which accounts for just eight per cent of England. 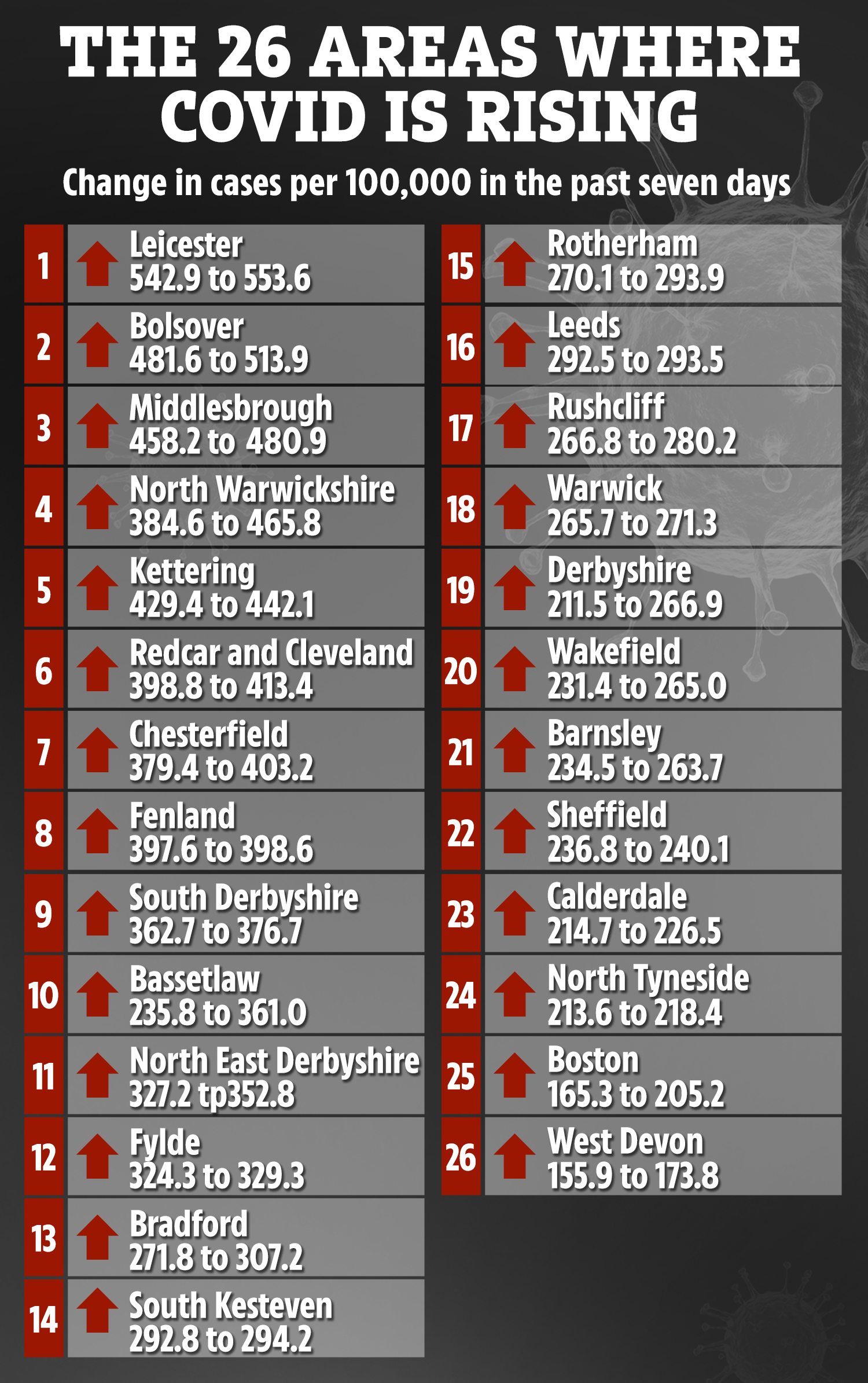 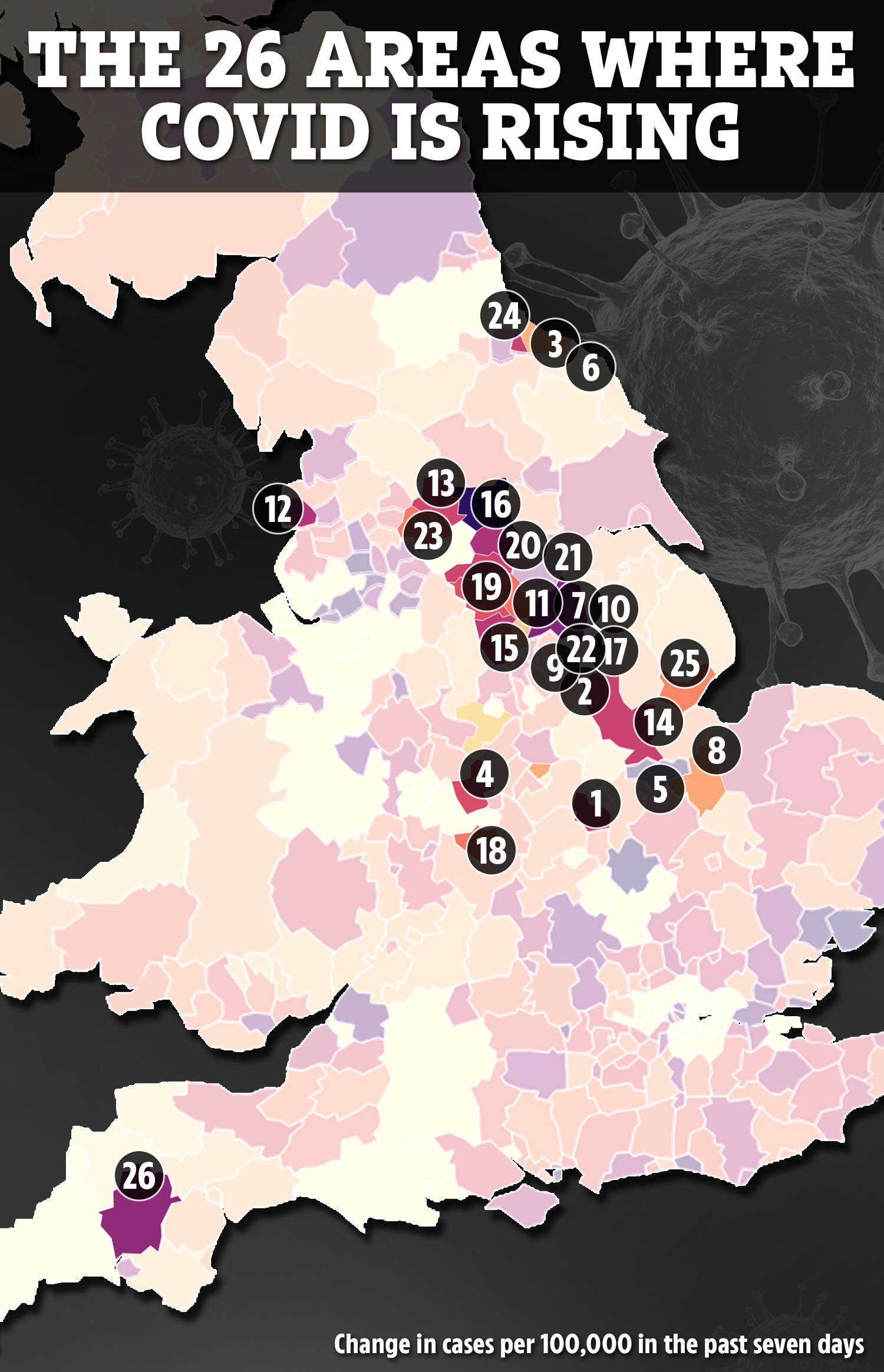 A mass vaccination site is set to open in the city this week with hopes of vaccinating thousands of local residents.

Other areas that have seen a rise in cases include Bolsover, Middlesbrough and North Warwickshire.

Kettering in Northamptonshire has also seen a rise in cases from 432.3 to 442.1.

Just yesterday a Sainsbury's in the area, which provides the fleet for door to door deliveries, revealed that an outbreak had been detected at the supermarket and that a number of staff were having to self isolate.

Wakefield in West Yorkshire has also seen an increase from 231.4 to 265.

Hospital cases are also on the up in the area and the number of patients receiving care for the virus from the Mid Yorkshire Hospitals NHS Trust has gone from 206 to 254 in just one week.

While an increase has been seen in 26 areas above, cases are falling across the rest of the country.

Prime Minister Boris Johnson is said to be preparing to unveil his road map out of lockdown by mid-February – as Britain is now on course to vaccinate 30 million people by March.

Government sources hint the PM's ambitious blueprint is likely to include crucial targets concerning the roll out of coronavirus jabs, falling numbers of infections and the reopening of some schools.

On Tuesday evening, Boris vowed to fight the pandemic with "greater resolve" after it was revealed the UK passed the tragic milestone of 100,000 deaths.

He said the huge death toll "exhausts the thesaurus of misery" and represents "an appalling and tragic loss of life".

The PM announced: "I'm sorry to have to tell you that today the number of deaths recorded from Covid in the UK has surpassed 100,000.

"It's hard to compute the sorrow contained in that grim statistic – the years of life lost, the family gatherings not attended, and for so many relatives the missed chance even to say goodbye.

"I offer my deepest condolences to everyone who has lost a loved one: fathers and mothers, brothers and sisters, sons and daughters, and the many grandparents who have been taken."