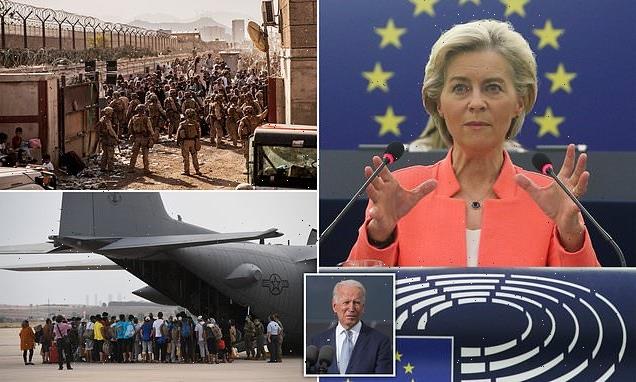 The European Union should build its own military after being abandoned by Joe Biden and the US in Afghanistan, says Ursula Von Der Leyen

The European Union will press ahead with plans to develop its own shared military to limit its reliance on the US following the hasty pull-out from Afghanistan according to Ursula Von Der Leyen.

In a self-styled State of the European Union address on Wednesday, European Commission President von der Leyen said that the failure of the government and security forces to repel Taliban insurgents raises troubling questions for the 27-nation bloc, but also for NATO.

The President unveiled new plans for the EU to develop its own defence capacities to ensure that it has more freedom to act in future crises, after Joe Biden’s decision to withdraw American troops by August 31 forced the hands of EU countries incapable of facing the Taliban alone.

In her speech, Von der Leyen said the EU needed the ‘political will’ to intervene militarily without the US, and that ‘it is time for Europe to step up to the next level’.

The President concluded by saying France will host an EU defence summit next year to develop the plans. 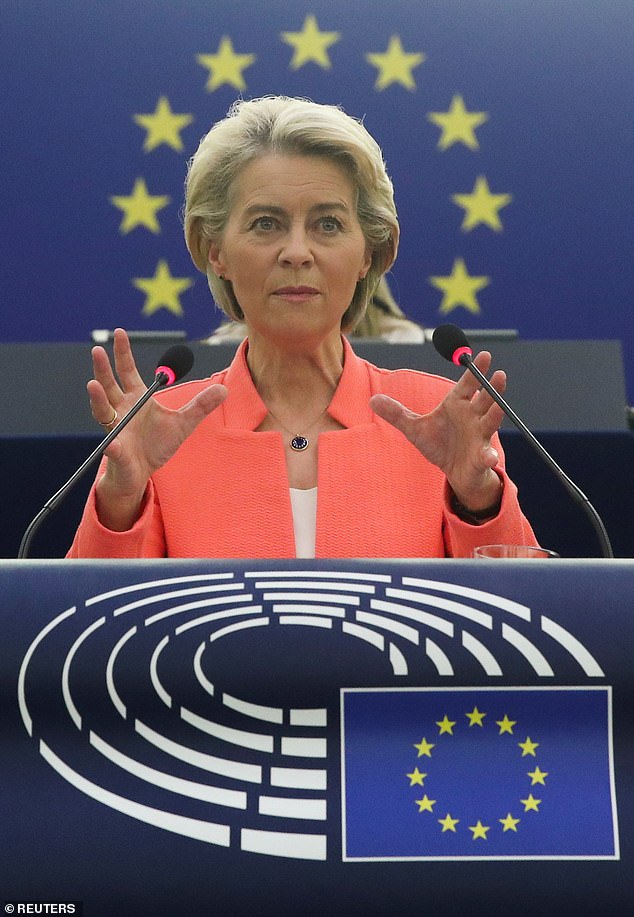 European Commission President von der Leyen said on Wednesday that the failure of the government and security forces in Kabul and their fall to Taliban insurgents in a matter of days raises troubling questions for the 27-nation bloc, but also for NATO 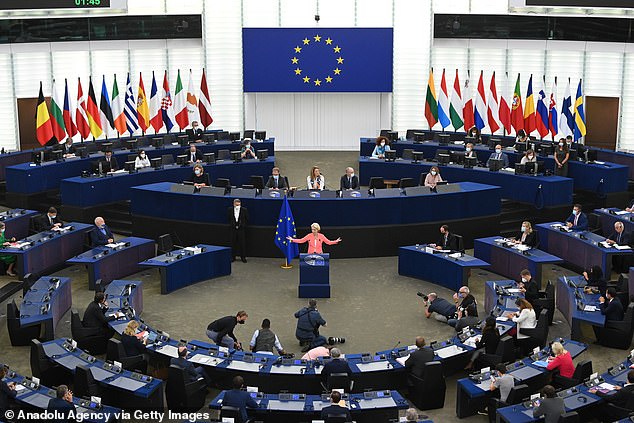 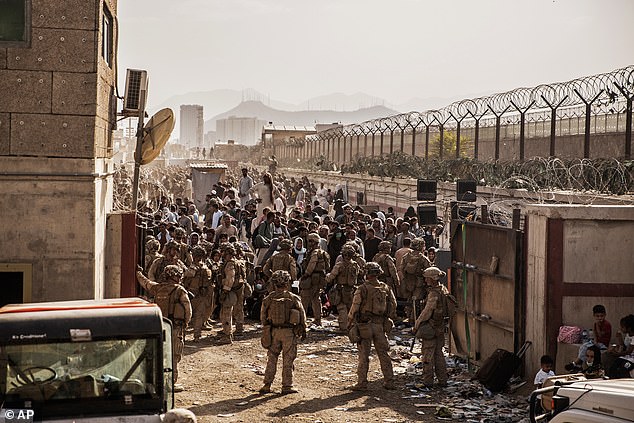 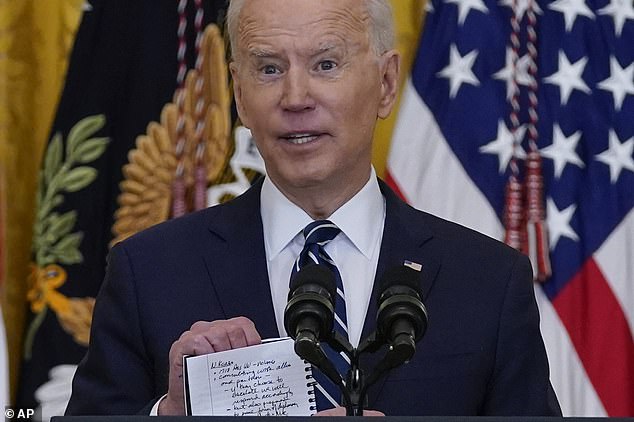 In her speech, Von der Leyen said the EU needed the ‘political will’ to intervene militarily without help from Joe Biden’s US troops, and that ‘it is time for Europe to step up to the next level’

The scenes of chaos in the final days of Kabul evacuations saw Afghans plunge to their deaths from the sides of military aircraft on take-off and a suicide bombing that killed 169 Afghans and 13 US personnel and encapsulated the end of a two-decade war led by Washington with support from the EU.

‘Witnessing events unfold in Afghanistan was profoundly painful for all the families of fallen servicemen and servicewomen,’ von der Leyen told EU lawmakers.

‘To make sure that their service will never be in vain, we have to reflect on how this mission could end so abruptly.’

‘There are deeply troubling questions that allies will have to tackle within NATO,’ the former German defence minister said.

But she conceded that cooperation with NATO, where the US is by far the most powerful and influential member, must also remain a priority.

Still, von der Leyen said at the European Parliament in Strasbourg, France, that ‘Europe can – and clearly should – be able and willing to do more on its own,’ and she insisted that ‘It is time for Europe to step up to the next level.’

Earlier this month, EU ministers debated creating a standby EU force of around 5,000 troops to deploy in crises like the one at Kabul airport, but the plan faces opposition from some of the 22 EU countries that are also members of NATO, notably countries bordering Russia comforted by US security assurances.

The EU currently has a system of battlegroups to deploy to hot spots but they’ve never been used, and the disjointed nature of the troops gives European leaders little confidence, particularly as they are generally reluctant to send their troops to active conflict zones.

‘You can have the most advanced forces in the world – but if you are never prepared to use them – of what use are they?

‘What has held us back until now is not just a shortfall of capacity – it is the lack of political will,’ von der Leyen said.

‘If we develop this political will, there is a lot that we can do at EU level.’ 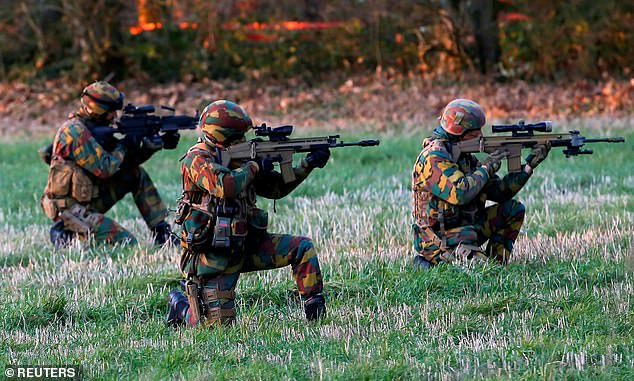 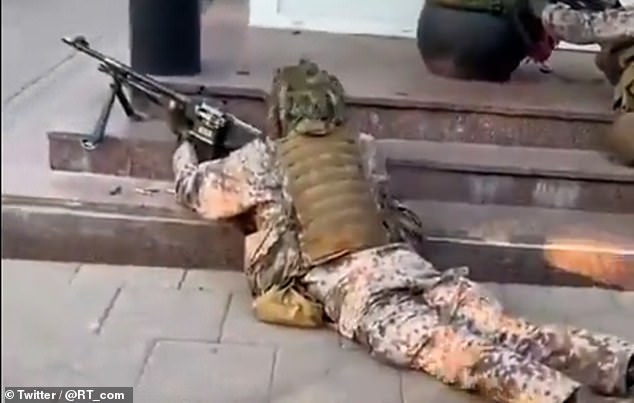 The President went onto declare that the EU must lay the foundations for better collective decision-making and intelligence sharing, make shared operations of the 27 member countries’ military equipment more cohesive, and invest in common projects like fighter jets, drones and cyber capacities.

To do so, she proposed a waiver on value added tax for defence equipment developed and produced in Europe, which could help wean the bloc off its dependence on US gear.

Von der Leyen said that she and French President Emmanuel Macron will convene a summit on European defence when France takes over the bloc’s rotating presidency in the first half of 2022.

Her call to arms will likely receive backing from many of Europe’s most influential states – Macron has long-called for more EU defence autonomy, notably during the turmoil of the Trump administration, while German Defence Minister Annegret Kramp-Karrenbauer said earlier this month the EU should become ‘a strategic player to be reckoned with’.