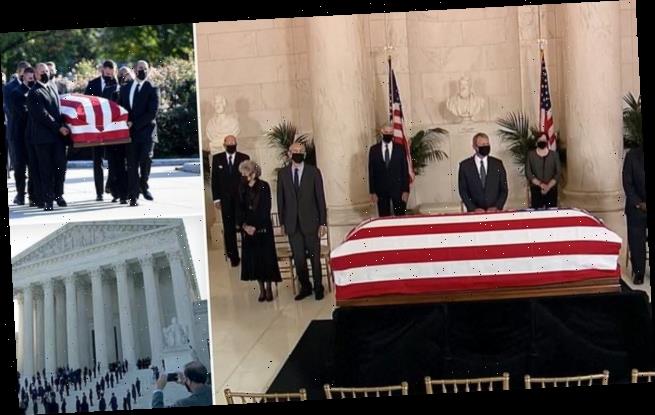 RIP RBG: Ruth Bader Ginsburg’s casket arrives at the Supreme Court where it will go on display for two days – as Donald Trump says he will visit tomorrow to pay his last respects

Mourners gathered at the Supreme Court Wednesday morning to pay their respects to the late Justice Ruth Bader Ginsburg as her casket arrived for a ceremony in the court’s Great Hall.

Thousands are expected to turn out to bid farewell to the women’s rights champion, leader of the court’s liberal bloc and feminist icon who died last week aged 87.

Supreme Court police carried her flag-fraped coffin up the steps for the 9.30am ceremony, flanked by lines of the justice’s former law clerks, who served as honorary pallbearers.

Her coffin rested on a catafalque, on loan from Congress, that once held President Abraham Lincoln’s remains.

Following the ceremony, Ginsburg will then lie in repose for two days on the front steps of the courthouse where she served for 27 years and, before that, argued six cases for gender equality in the 1970s.

The public will be able to pay their respects in front of the building over the two days with social distancing measures in place.

President Donald Trump said that he will visit Thursday to pay his last respects to Ginsburg amid the controversy over her replacement, the White House said. 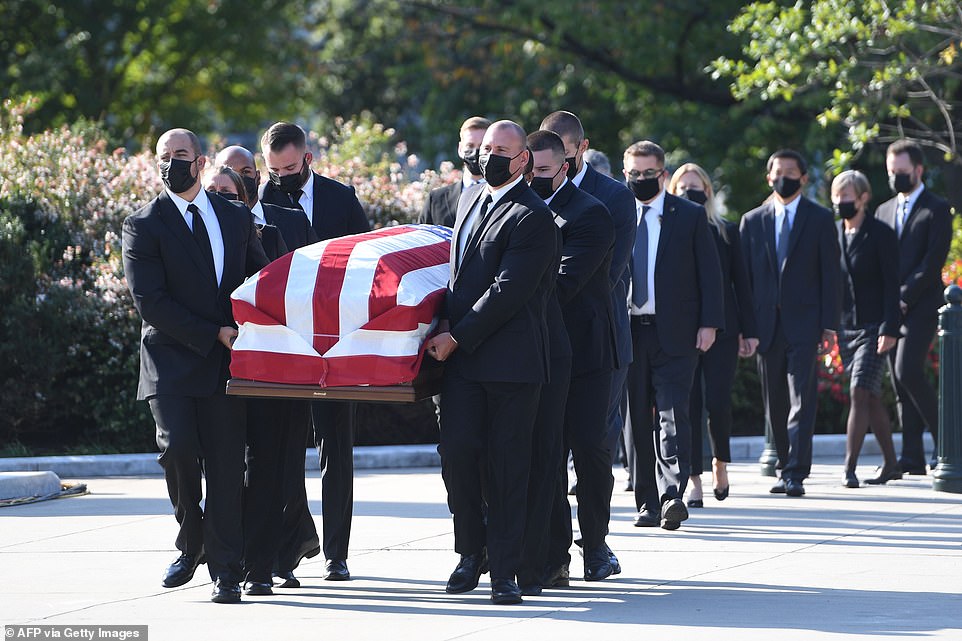 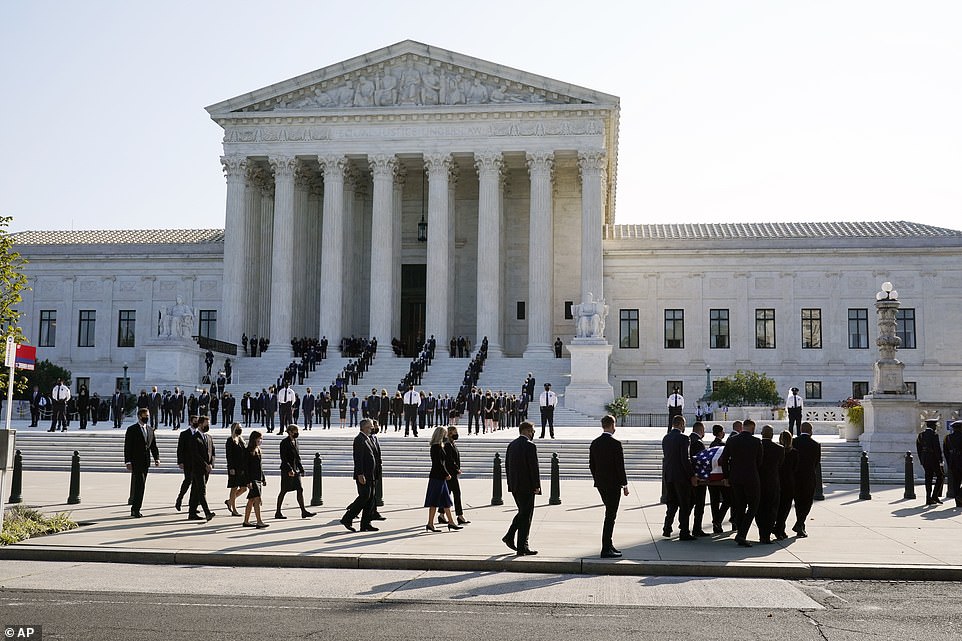 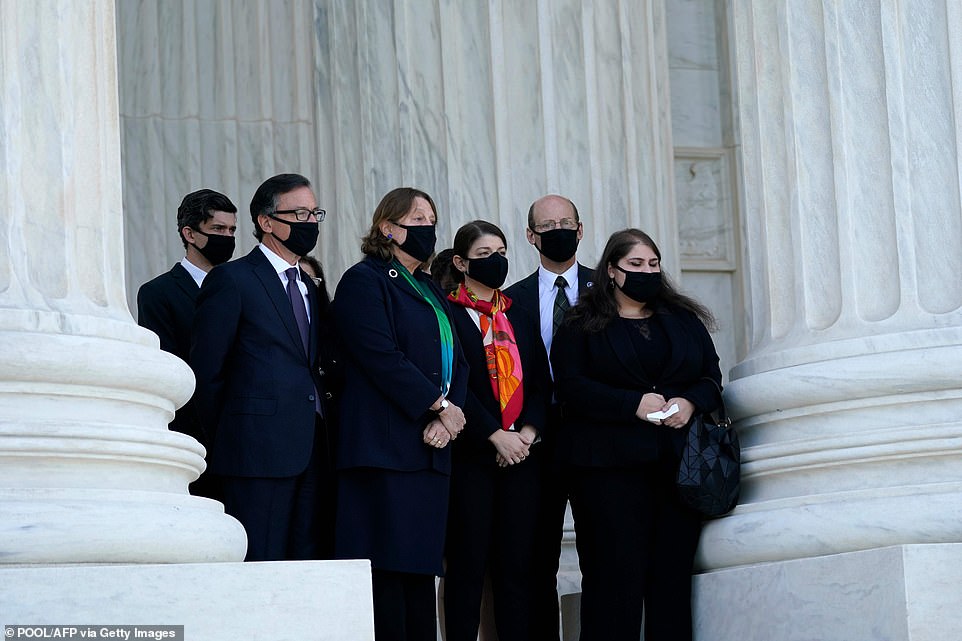 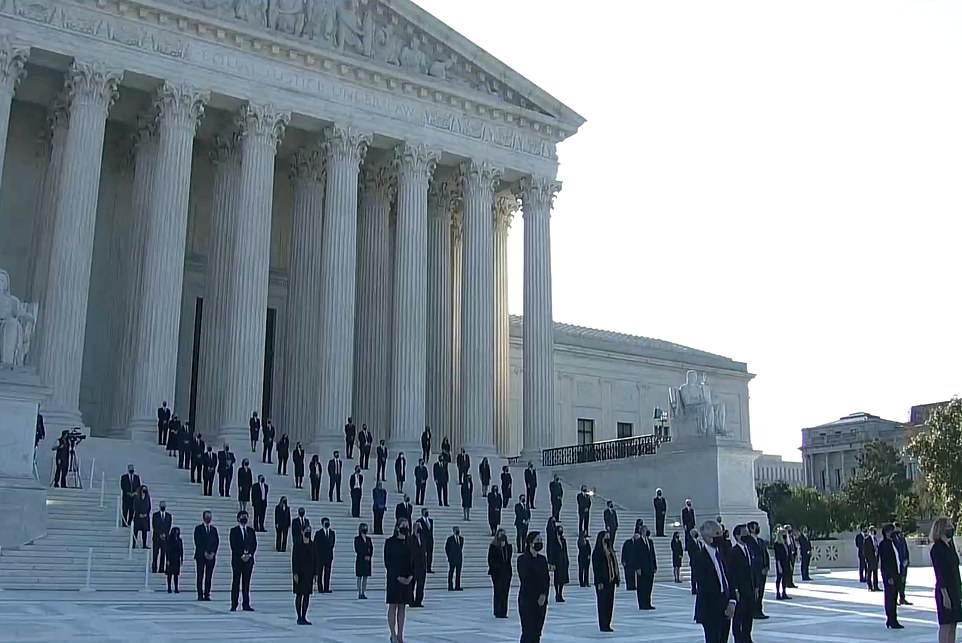 The justice’s former law clerks, who will serve as honorary pallbearers, lined up as Ginsburg’s casket arrived 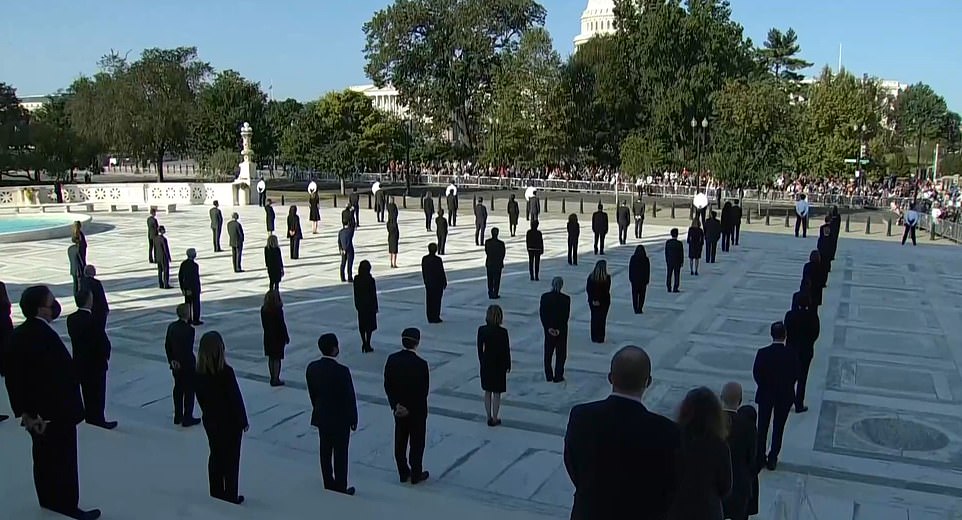 The body of late Justice Ruth Bader Ginsburg, who died last week at 87, will lie in repose outside the U.S. Supreme Court so members of the public can pay their respects. On Wednesday, her former law clerks lined up to act as pallbearers 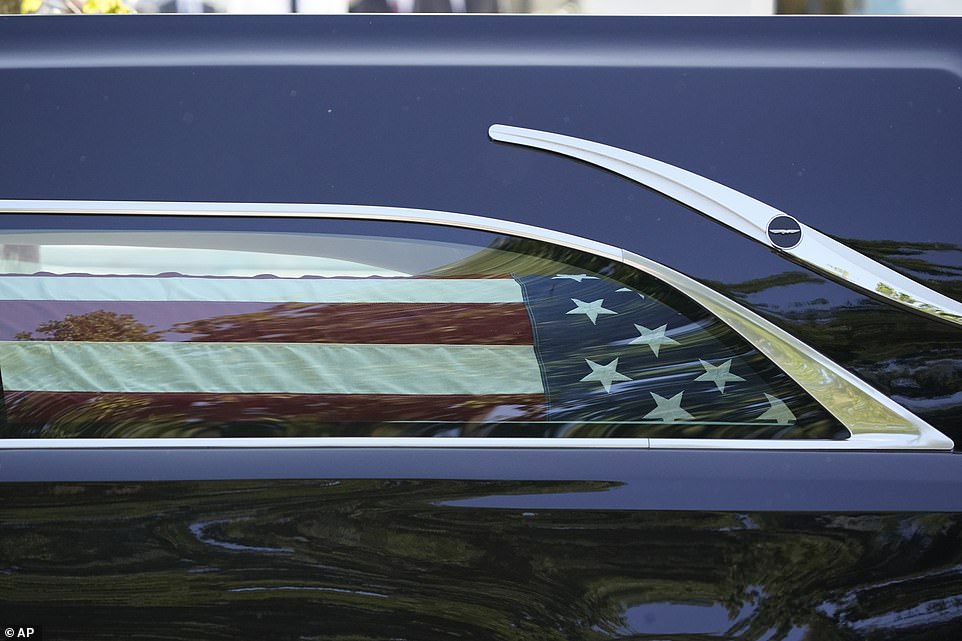 The flag-draped casket of Justice Ruth Bader Ginsburg arrives at the Supreme Court in Washington, Wednesday

Chief Justice John Roberts and the other justices were in the Great Hall as the casket arrived and was placed on the Lincoln Catafalque.

A 2016 portrait of Ginsburg by artist Constance P. Beaty was be displayed nearby.

The entrance to the courtroom, along with Ginsburg’s chair and place on the bench next to Roberts, were draped in black, a longstanding court custom.

These visual signs of mourning, which in years past have reinforced the sense of loss, will largely go unseen this year. The court begins its new term October 5, but the justices will not be in the courtroom and instead will hear arguments by phone.

After the private ceremony inside the court, Ginsburg’s casket will be on public view from 11 am to 10 pm Wednesday and 9 am to 10 pm Thursday.

On Friday, Ginsburg will lie in state at the Capitol, the first woman to do so and only the second Supreme Court justice after William Howard Taft. Taft had also been president. Rosa Parks, a private citizen as opposed to a government official, is the only woman who has lain in honor at the Capitol.

Ginsburg will be buried beside her husband, Martin, in a private ceremony at Arlington National Cemetery next week. Martin Ginsburg died in 2010. She is survived by a son and a daughter, four grandchildren, two step-grandchildren and a great-grandchild.

Even with the court closed to the public because of the coronavirus pandemic and Washington already consumed with talk of Ginsburg’s replacement, the justice’s former colleagues, family, close friends and the public will have the chance Wednesday and Thursday to pass by the casket of the second woman to serve on the Supreme Court.

The sad occasion was expected to bring together the remaining eight justices for the first time since the building was closed in March and they resorted to meetings by telephone. 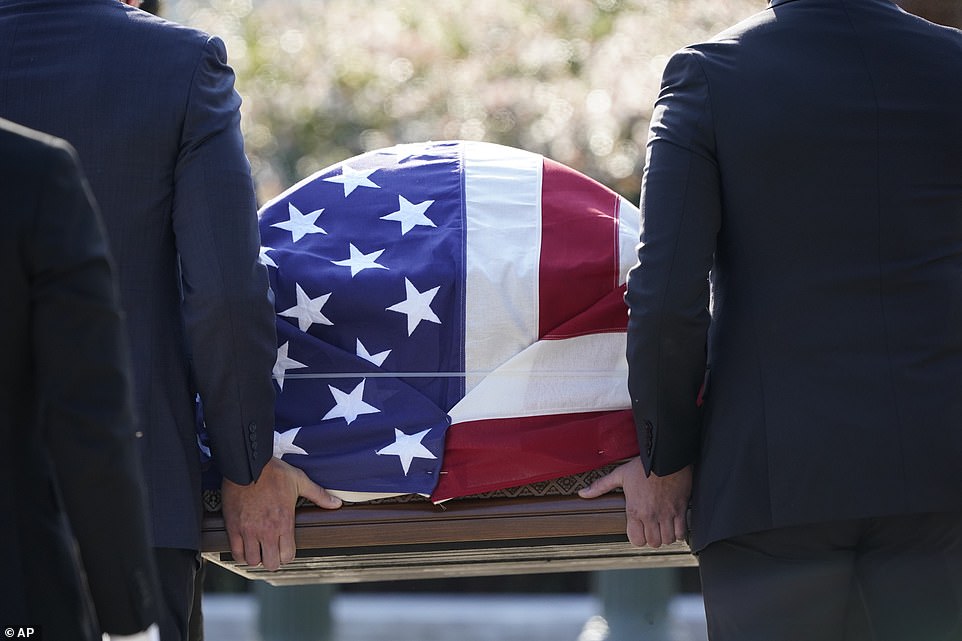 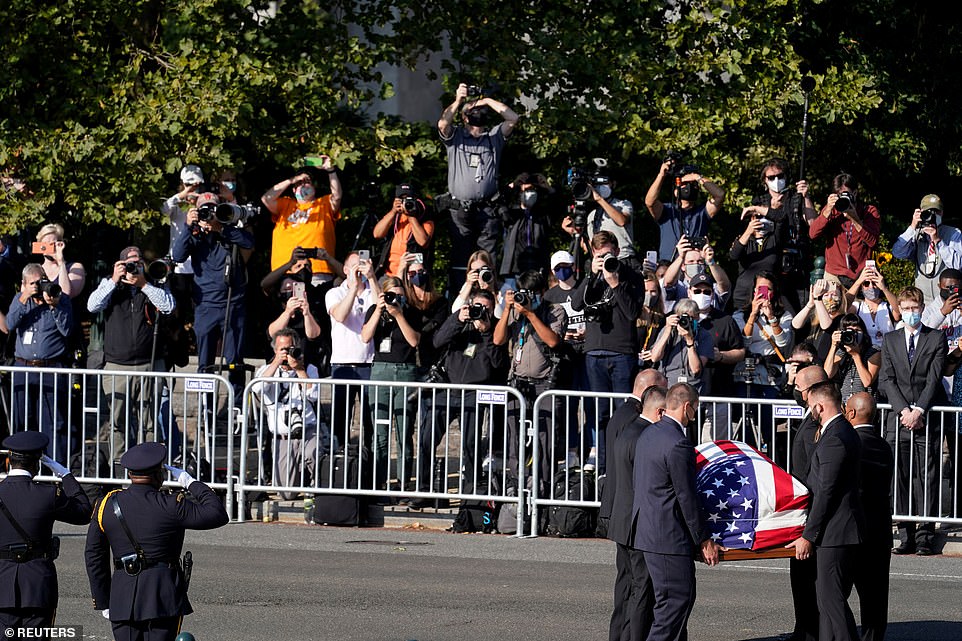 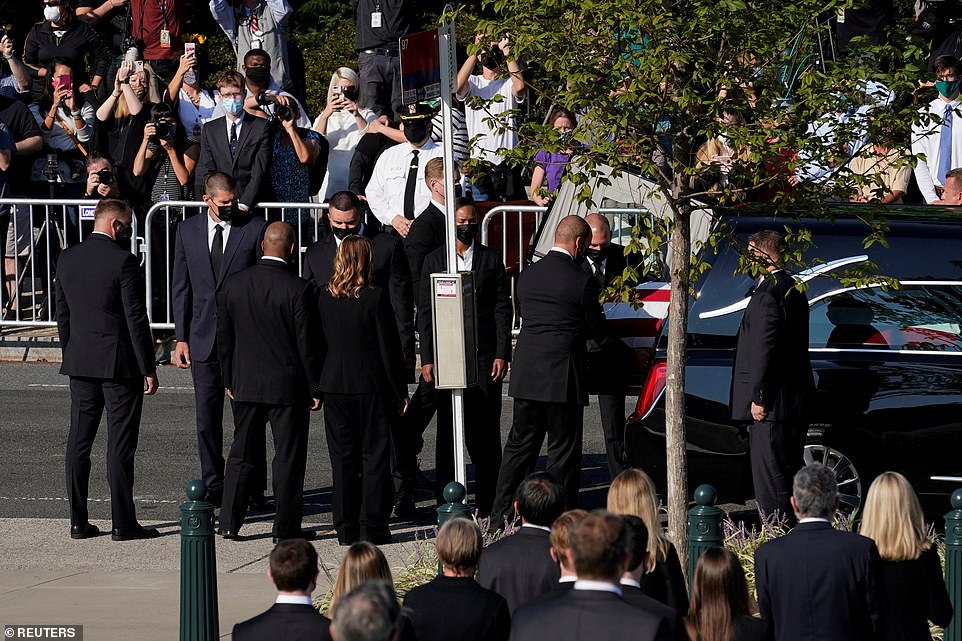 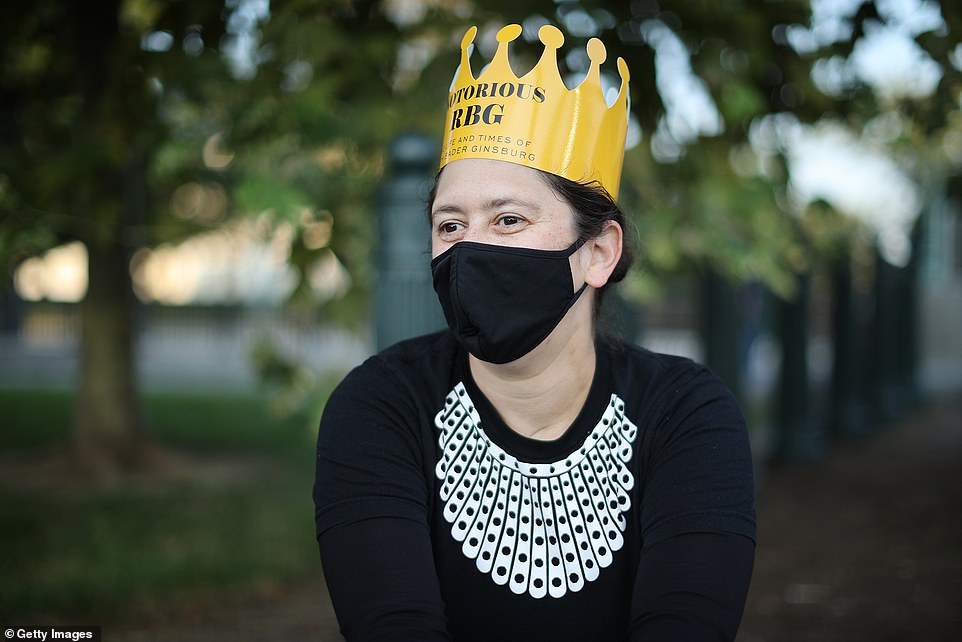 An admirer of U.S. Supreme Court Associate Justice Ruth Bader Ginsburg waits for the arrival of her remains outside the court on Wednesday morning 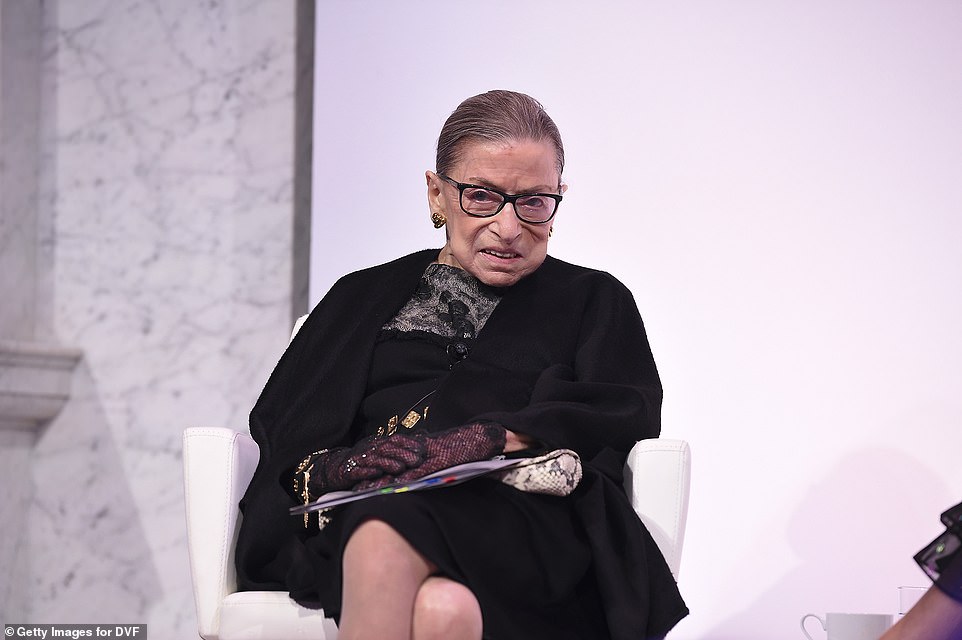 Justice Ginsburg died Friday aged 87 after a battle with cance

Nearly 200 members of the public had gathered to pay their respects by early morning, intermingling with dog walkers and joggers who cut through the crowd. At the front of the crowd were attorneys Cara Stewart and Jenny Beene-Skuban, who drove overnight from the Cincinnati area to be there.

‘I felt like I couldn´t not be here,’ said Stewart, a public-interest lawyer from Martin, Kentucky.

‘What moves me more is her career before the court,’ she said. ‘Using the courts for justice and being successful – that´s not easy to do.’

Beene-Skuban, of Cincinnati, said Ginsburg´s career blazed trails for women who came after her.

‘We’re here to recognize the shoulders we´re standing on,’ she said.

Outside the building chairs and monitors were set up.

Since her death Friday evening, people have been leaving flowers, notes, placards and all manner of Ginsburg paraphernalia outside the court in tribute to the woman who became known in her final years as the ‘Notorious RBG.’ Court workers cleared away the items and cleaned the court plaza and sidewalk in advance of Wednesday’s ceremony. 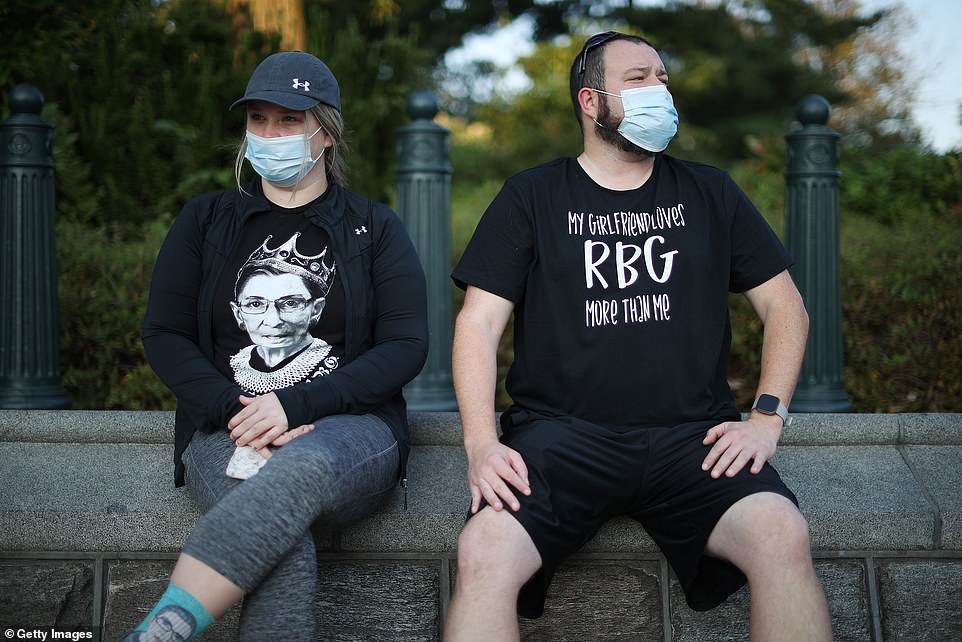 Fans gathered outside the Supreme Court on Wednesday morning ahead of the arrival of Ginsburg’s casket. She will lie in repose at the court for two days 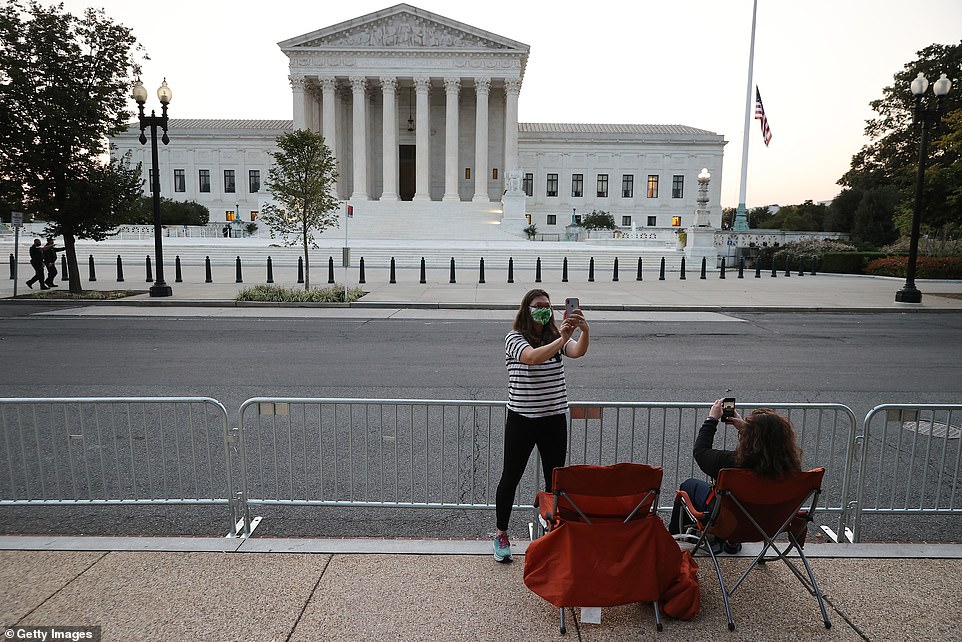 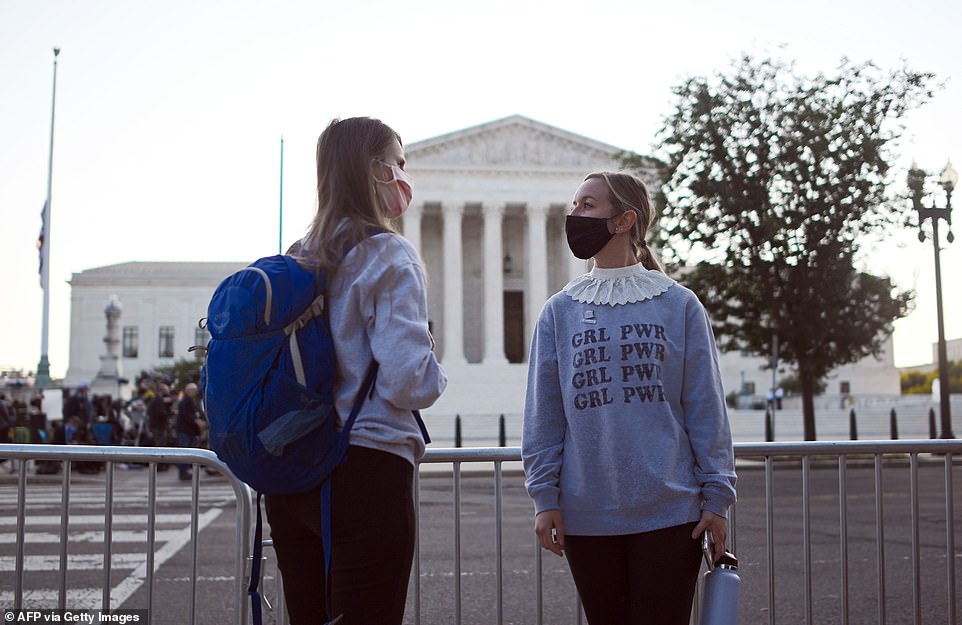 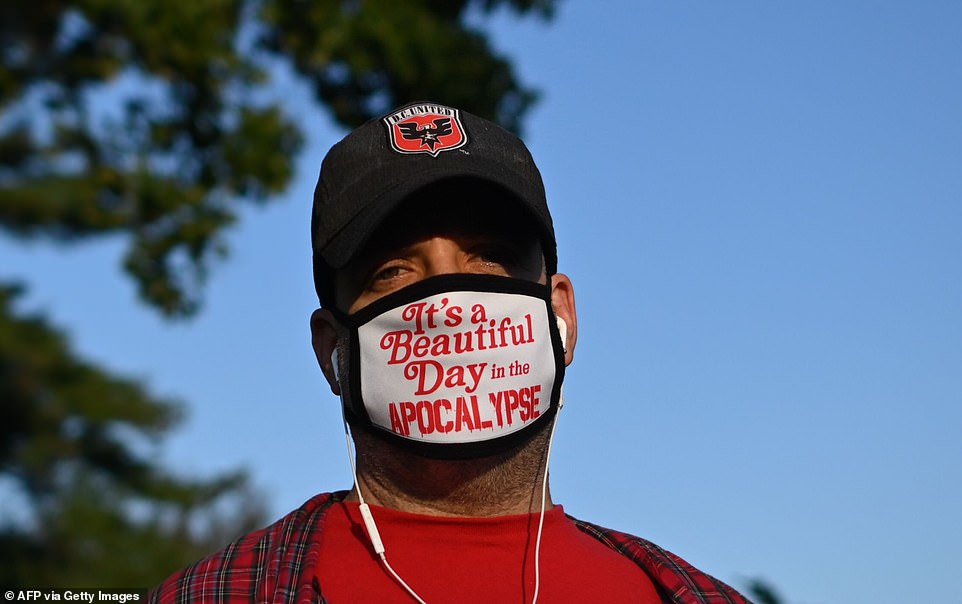 A man waits for the arrival of the casket of Justice Ruth Bader Ginsburg at the Supreme Court for a private ceremony and two days of public viewing in Washington, DC, Wednesday 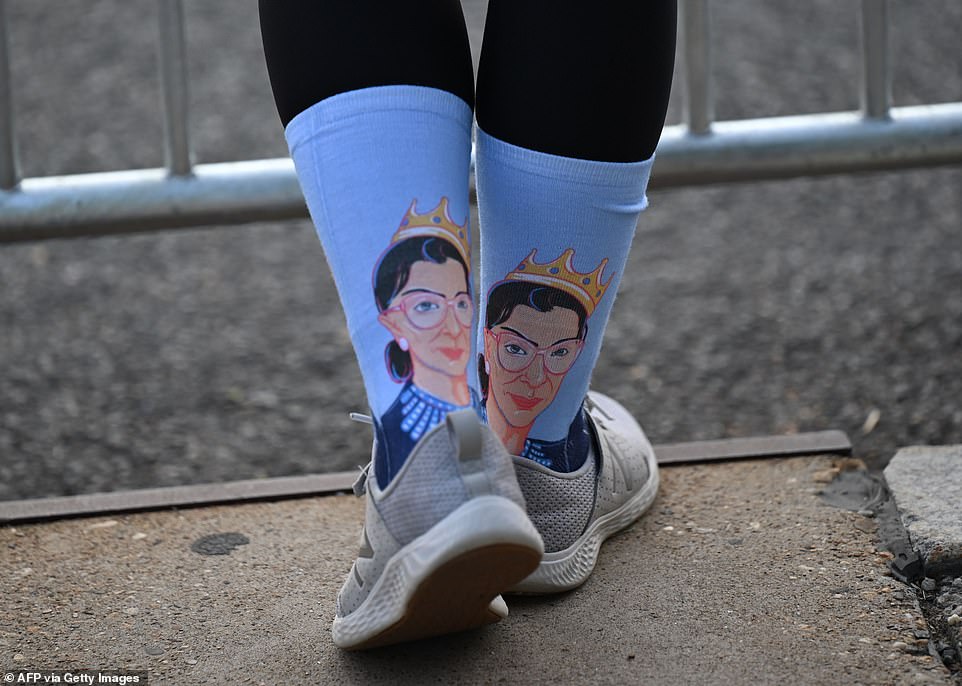 Ginsburg’s death from cancer at age 87 has added another layer of tumult to an already chaotic election year. Trump and Senate Republicans are plowing ahead with plans to have a new justice on the bench, perhaps before the Nov. 3 election.

Only Chief Justice Roger Taney, who died in October 1864, died closer to a presidential election. Lincoln waited until December to nominate his replacement, Salmon Chase, who was confirmed the same day.