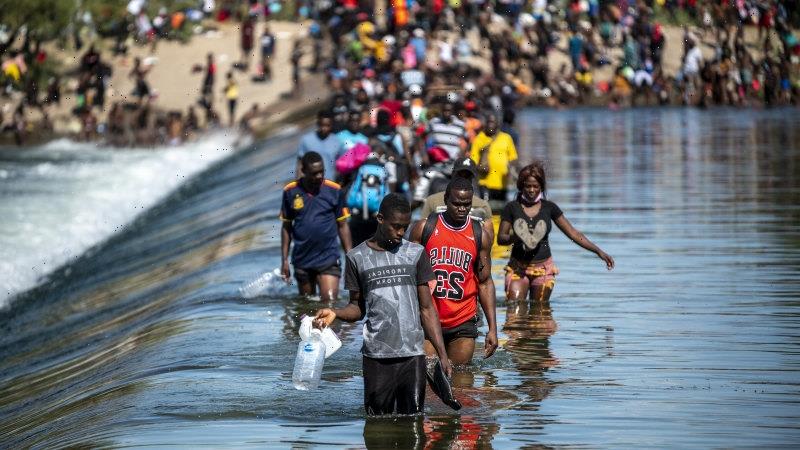 Del Rio, Texas: Thousands of Haitian migrants who have crossed the Rio Grande since Tuesday are sleeping outdoors under a border bridge in South Texas, creating a humanitarian emergency and a logistical challenge US agents describe as unprecedented.

Del Rio Mayor Bruno Lozano said that as of early Thursday evening (Friday AEST) 10,503 migrants were under the Del Rio International Bridge, up from 8200 in the morning. The bridge links Del Rio with Ciudad Acuna in Mexico.

Food and water has been scarce, around 20 migrants told Reuters, and temperatures have risen to about 37 Celsius. 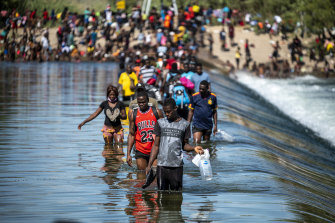 Migrants cross between Texas and Mexico at the Rio Grande in Ciudad Acuna.Credit:Sergio Flores/The Washington Post

The migrants arriving to Del Rio appear to be part of a larger wave of Haitians heading northward, many of whom arrived in Brazil and other South American nations after the 2010 earthquake. They are on the move again, embarking on a gruelling, dangerous journey to the United States with smuggling organisations managing the trip, according to border authorities and refugee groups.

More than 29,000 Haitians have arrived over the past 11 months, the latest Customs and Border Protection figures show, including some in mixed-nationality families with children born in Brazil, Chile or other South American nations.

The sudden influx has presented the Biden administration with a new border emergency at a time when illegal crossings have reached a 20-year high and Department of Homeland Security officials are straining to accommodate and resettle more than 60,000 Afghan evacuees. 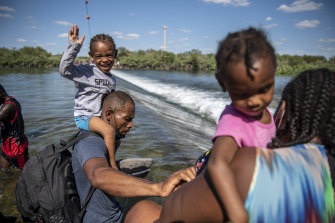 The migrants have trekked through the jungles of Panama’s Darien Gap, navigated migrant camps and criminal gangs in Central America, and dodged border guards and troops along the highways of southern Mexico. Some say the economic toll of the pandemic pushed them to leave, while others say a more welcoming US administration offering them a fleeting opportunity to reach the United States.

“I see brave people who instead of being trapped by conformity chose to find a better life,” said Wendy Guillaumetre, 31, who spent four years in Chile before setting out with his wife and 3-year-old daughter for the United States. “They are courageous,” he said. “Conditions are too hard in Haiti.”

Guillaumetre had returned to the Mexican side of the Rio Grande to charge his phone and find food for his family. “I have many dreams and don’t give up easily,” he said, holding a ticket that, by his estimation, puts his family 2,000th in line to be processed by Border Patrol.

The Biden administration has curtailed deportation flights to Haiti after the assassination of President Jovenel Moise in July and a 7.2-magnitude earthquake August 14 that killed more than 2000. And DHS has extended temporary protected status, or TPS, eligibility for Haitians, a measure that allows Haitians living in the United States without legal status to qualify for provisional residency and avoid deportation.

How many more may arrive in the next few days is unclear. CBP is scrambling to send additional agents to Del Rio to help process the migrants, issuing them numbers as they queue up to be formally apprehended, the first step in applying for asylum or another form of US protection. Most of the migrants are likely to be released into the United States with a notice to appear in court at a future date.

“The Border Patrol is increasing its manpower in the Del Rio Sector and coordinating efforts within DHS and other relevant federal, state and local partners to immediately address the current level of migrant encounters and to facilitate a safe, humane and orderly process,” CBP said in a statement. “To prevent injuries from heat-related illness, the shaded area underneath Del Rio International Bridge is serving as a temporary staging site while migrants wait to be taken into USBP custody.”

Along the banks of the Rio Grande on Thursday, hundreds of migrants waded through knee-high water along a concrete spillway, moving back and forth between the camp and shops in Acuna on the Mexican side. They carried ice, plates of food and other supplies; one man forded the river with a rolled-up mattress on his shoulders.

Others bathed in the river, cleaned clothes and cooled off from the muggy heat. Mexican vendors wandered through the crowd selling snacks, water and ice cream. Several migrants said there was nothing to eat on the US side. A few in the camp had strung up clotheslines and fashioned shelters out of sticks and carrizo cane.

Ramses Colon, a 41-year-old Afro-Cuban asylum seeker among the mostly Haitian crowd who worked in Peru to save money for the trip, said the Del Rio camp was “chaos”.

“You stand there among thousands with your little ticket waiting for your turn,” he said.

Colon and his partner, Estephany Cabrera, 30, joined the crowds of Haitians in Colombia, crossing the Darien jungle and using the group’s numbers to protect themselves. “I joined them because I look like them,” Colon said. He was walking back into Mexico to pick up cash wired by his family in the United States. “Without money, you are nothing here,” he said.

“We’re scrambling to bring every resource we can, but it’s a logistical nightmare,” he said. “We’re pulling agents from across the country to help, but they’re not going to be there today, and we’re just trying to keep heads above water.”

Families with small children are given priority, Anfinsen said, in order to move them out of the bridge area as soon as possible.

“Many agents are mothers and fathers, and seeing kids in this situation is sad for everyone,” he said. “Morale is terrible.”

US officials say they will continue to use emergency authorities under Title 42 of the US public health code to rapidly return or “expel” migrants. But Mexican authorities have declined to take back Haitians in recent months.

The government is also contending with new court orders related to its border policies. On Thursday, US District Judge Emmet Sullivan in the District of Columbia blocked the Biden administration from using Title 42 to expel migrant families, though he stayed the order for 14 days. The percentage of families returned under Title 42 has been declining in recent months; in August authorities used it on just 19 per cent of the more than 86,000 family members taken into custody.

The Supreme Court also said last month that the Biden administration must restart a Trump administration program that requires asylum seekers to wait in Mexico while their claims are adjudicated in US courts.

The Del Rio border sector has been among the busiest for illegal crossings in recent months as thousands of Haitians, Cubans, Venezuelans and Hondurans climb down from the limestone bluffs on the Mexican side to wade across the Rio Grande.

Lozano, a Democrat, warned the Biden administration in a February video that his community needed more federal support to cope with a surge in crossings. “I thought the worst-case scenario was having a couple of people, maybe 150 people roaming the streets,” said Lozano.

“Although I foreshadowed a worst-case scenario, this is probably a worse case of worst-case scenarios,” he said. “I need the administration to recognise that there is a border crisis happening in real time right now and it has dire consequences on security, health and safety.”

In recent months, the city has been a testing ground for Republican Governor Greg Abbott’s most aggressive border security plans, including charging migrants with state crimes such as trespassing.

Val Verde County, which includes Del Rio, went for former president Donald Trump in 2020, voting for a Republican at the top of the ticket for the first time in decades.

Haitian, Venezuelan and Cuban migrants often say they prefer to cross in the Del Rio area because of its reputation as comparatively safer than the Rio Grande Valley downriver. 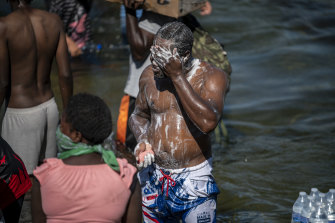 A migrant man washes up in the Rio Grande near Ciudad Acuna, Mexico, on Thursday.Credit:Sergio Flores/The Washington Post

Many of the migrants arrived to the border on buses that appear to be part of a large smuggling operation, Lozano said. “It just sounds like there’s an off-grid bus system that’s not registered with the Mexican government that are driving these individuals north,” he said.

Some Del Rio residents, particularly those living along the river and on ranches, have raised alarms in recent months about the large groups of migrants appearing on their properties.

The mayor said his city and the migrants were both victims, suffering the consequences of federal policy decisions that fail to address the realities on the ground in border communities.

“You have a favela that has been established overnight with individuals who are destitute,” Lozano said. “Border Patrol is doing their best to process these people, but the Del Rio Sector is 240 miles [386 kilometres] wide. If the attention is given here to these 8000 people, that opens up a big question: Who’s watching the rest of the sector?”