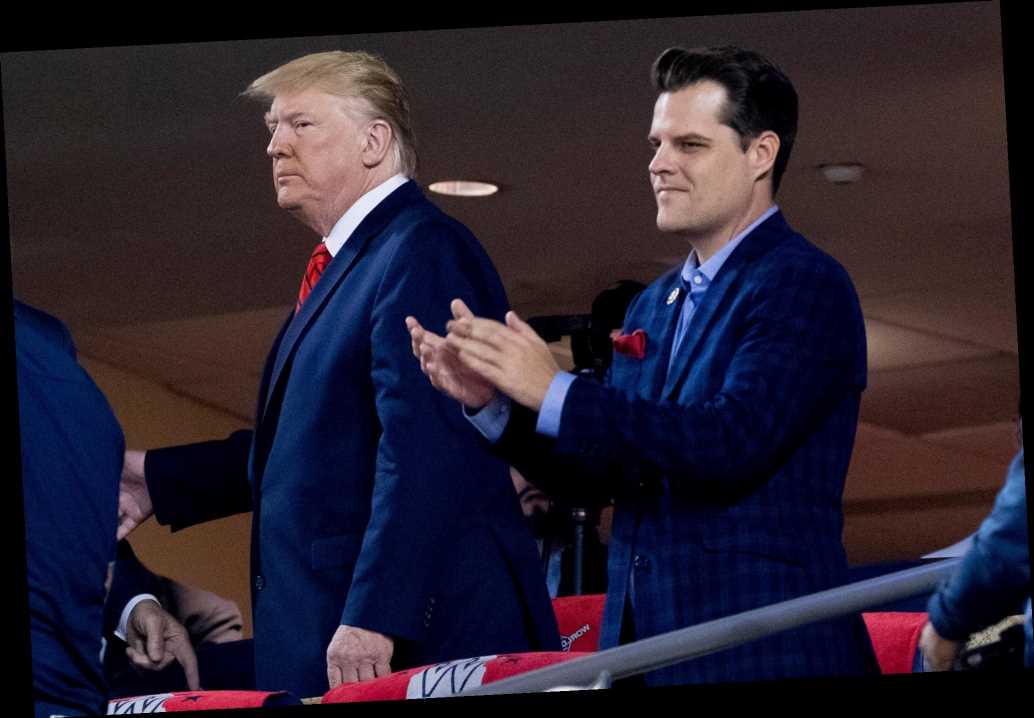 Katie Hill opens up about friendship with Matt Gaetz, wants him ‘held responsible’

Former President Donald Trump on Wednesday denied a report that claimed embattled Rep. Matt Gaetz sought a blanket pardon from his White House — for himself and unidentified congressional allies — amid a federal probe of underage sex-trafficking allegations.

“Congressman Matt Gaetz has never asked me for a pardon,” the 45th commander-in-chief said in an emailed statement. “It must also be remembered that he has totally denied the accusations against him.”

The New York Times reported Tuesday that Gaetz (R-Fla.) allegedly pushed a pardon effort around the time he was being investigated by the Justice Department for an alleged relationship with a 17-year-old girl that violated sex-trafficking laws, citing two sources familiar with the discussions.

According to the newspaper, it was unclear whether Gaetz or the White House was aware of the federal probe when he made the request, which aides relayed to the president, adding that it also was unclear whether the pol discussed the matter directly with Trump.

If the reporting is accurate, the conservative firebrand did not tell White House aides he was being investigated for possible sex-trafficking violations when he made the request.

White House lawyers and officials thought granting him a blanket pardon would set a bad precedent, so they turned him down, the sources told the news outlet.

Citing its own sources, ABC News also reported that Trump was aware of Gaetz’s request, which the White House quickly dismissed.

In recent days, some Trump associates theorized that Gaetz’s request for pardons for himself and others was an attempt to conceal his own potential legal exposure, the Times reported.

A spokesperson for Gaetz denied to the Times that the request was related to the Justice Department probe.

“Entry-level political operatives have conflated a pardon call from Representative Gaetz — where he called for President Trump to pardon ‘everyone from himself, to his administration, to Joe Exotic’ — with these false and increasingly bizarre, partisan allegations against him,” the rep told the paper.

“Those comments have been on the record for some time, and President Trump even retweeted the congressman, who tweeted them out himself.”

Reached by Politico last week, Gaetz denied that he had sought a pardon from the then-president.

Asked again Tuesday evening, Gaetz said he stood by that statement but cautioned he had not read the Times piece.

“The recent false allegations against me are not something I’ve ever discussed with Trump, pardons or otherwise,” he told the outlet in his initial denial.

The embattled lawmaker said he and fellow lawmakers had met with Trump to discuss a broader pardon strategy after the Jan. 6 riots at the US Capitol — an exchange in which he advised the former president to pardon himself, his family and others from a charge of insurrection, Politico reported.

Trump was impeached by the House on the charge of inciting an insurrection, but acquitted in the Senate.

Gaetz has denied any allegations of sexual misconduct.

In an op-ed in the Washington Examiner on Monday, Gaetz said he was “absolutely not resigning” as he blamed the scandal on “political opponents.”

He has remained defiant in the face of mounting allegations against him — including federal probes into whether he paid for sex with women, including a 17-year-old girl.

In addition to the Justice probe about allegedly paying the 17-year-old for sex and enticing her to travel, Gaetz has been accused of several misdeeds, including that he used to show pictures of naked women he slept with to fellow pols and that he played a Harry Potter-themed “sex challenge” where points would be awarded for various romps.

Michael Waldman, president of the nonprofit Brennan Center for Justice at NYU, told ABC News that Gaetz’s “request was so outlandish, apparently, that even President Trump turned it down.”

“It is an open question whether a president can give a blanket pardon in advance, since it amounts to an invitation to go forth and break the law,” he added.

Gaetz had previously expressed his support for Trump’s presidential pardons.

In a Nov. 24 appearance on Fox News, Gaetz declared that Trump should “pardon Michael Flynn, he should pardon the Thanksgiving turkey, he should pardon everyone from himself to his administration officials to Joe Exotic if he has to.”

“Because you see from the radical left a bloodlust that will only be quenched if they come after the people who worked so hard to animate the Trump administration with the policies and the vigor and the effectiveness that delivered for the American people,” he told Laura Ingraham. “So I think the president ought to wield that pardon power effectively and robustly.”